There was a ton of optimism surrounding the arrival of two big and talented freshmen – Owen Varnado and Kellen Mitchell. Both were easily good enough to make the varsity and start right away, and after a few years of development, everyone figured the sky would be the limit for the Warriors. 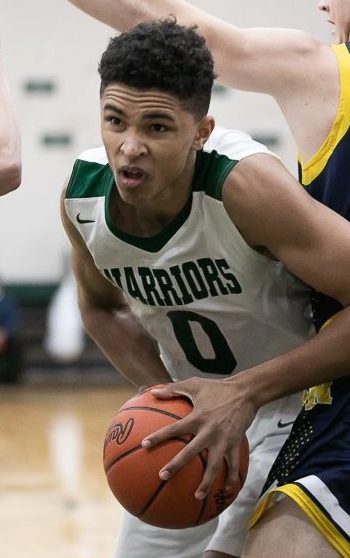 That changed last summer, when Mitchell transferred to go to an out-of-state prep school. Suddenly everyone wondered if WMC could live up to expectations with one piece missing from its Big 2.

Some also wondered if Varnado could handle the extra pressure, being the main guy on the team, instead of sharing the load with another gifted teammate.

The answer to both questions is an unqualified yes. The Warriors are doing great, led by Varnado, who overcame an injury and is having the best season of his high school career.

The best moment, at least so far, came last Friday, when Varnado poured in 19 points and snagged 12 rebounds as WMC stunned previously unbeaten Orchard View 57-50 to pull into a tie with the Cardinals for first place in the Lakes 8 Conference.

It was Western Michigan Christian’s sixth straight win and improved its record to 11-4 overall and 6-1 in the conference.       .

A road victory over a tough Ludington squad on Tuesday would give the Warriors a share of the conference crown and a lot of momentum as the state tournament begins next week with districts.

“We came in mentally thinking we had nothing to lose, so we just put it all out there,” said Varnado, a 6-foot-5 forward/guard, who openly showed his excitement on the court as the clocked ticked down in the upset victory over OV.

The really impressive thing about the Warriors’ six-game winning streak is that it’s come in just two weeks, with three games packed into each week. That’s a lot of games for high school basketball, but it’s common for all teams this year, because the season started more than two months late, and the normal three-month regular season has been crunched into about five weeks.

“Going two weeks in a row with three games each week is hard to do, and going 3-0 in both of them is a great feeling, especially ending with a win against a great team like Orchard View,” Varnado said. 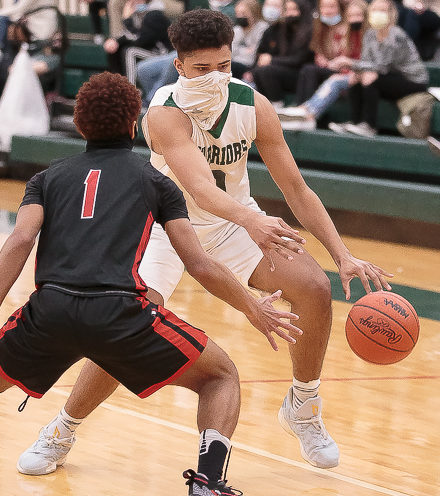 Varnado has now proven, beyond a doubt, that he can excel as the lead man on a very good team, without Mitchell in the lineup to share the scoring load.

He’s currently averaging 18.2 points, 9.1 rebounds, 3.1 assists and 1.5 blocks per game. He says he thrives on taking the lead, and with a group of talented teammates around him, he’s perfectly comfortable.

“I don’t think (Mitchell leaving) put any extra pressure on me,” Varnado said. “Kellen is a great player who impacted the team, but ultimately (his transfer) didn’t stop us from doing anything. We had a bunch of great guys returning.

“I’ve always considered myself a leader, so that extra responsibility is something I wanted for myself.”

WMC Coach Kurt Gruppen said Varnado took the challenge of playing without Mitchell and ran with it, because that’s the type of player he is.

“I think he’s enjoyed it as far as kind of having a little bit of a different role,” the coach said. “He’s kind of used it as motivation, to say ‘Hey, I’m going to help take this team and this program to the next level.’ He loved the challenge.”

Varnado had to work hard to overcome a nasty ankle injury that kept him out of the lineup and caused him to miss two games earlier this season. It was a bad sprain, but he recovered quickly, and came back with a hot hand. 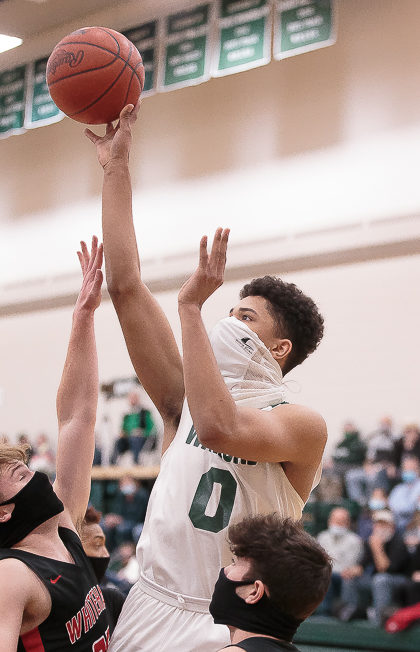 Varnado goes up for a shot in the Warriors’ matchup against Whitehall earlier this season. Photo/Randy Riksen

He said sitting out for 10 days was difficult, and he particularly regrets missing a chance to play Grand Rapids Covenant Christian, a team that beat the Warriors 74-44 without Varnado in the lineup.

“Covenant is a great team, and I haven’t had the opportunity to beat them yet,” Varnado said. “That’s definitely on my list for next year.”

Gruppen knows the Warriors are a much more complete team with Varnado leading the way. One good example came against a pesky North Muskegon team a few weeks ago, when Varnado scored 27 points, including 21 in the crucial second half, to push WMC to a tight 55-49 victory.

“He’s been playing well,” said WMC Coach Kurt Gruppen. “We ask him to do a lot for us offensively and defensively, and when he came back he didn’t really miss a beat.

“In the Ludington game and the North Muskegon game he made some really big shots, and against Whitehall he had some really key defensive plays, blocking shots and getting defensive rebounds in traffic to help seal things up. He’s a great defensive player, too.”

Varnado has worked hard to improve his game since last season, which the stats clearly show. Last year he averaged 12 points per game, which is quite good for a sophomore, but nowhere near the 18 he’s averaging this season.

One unique thing about Varnado is his increasing versatility. Many big men just play the post, wait for the ball and get a lot of tpoints in the paint. But Varnado has improved his outside shooting game, as evidenced by the four 3-pointers he recently nailed against Muskegon Catholic. He can play any position – even point guard at times – because of his rapidly improving ball-handling abilities.

He is also regularly assigned to guard the other team’s best player, because of his skill and hustle on defense.

That sounds a lot like his father, Dr. Byron Varnado, who graduated from WMC in 1988 and played a similar role for the Warriors under legendary coach Jim Goorman.

Goorman, now an assistant coach for the WMC girls squad, remembers the elder Varnado playing point guard for the team and handling the ball well, even though it was not his normal position.

He remembers Bryon Varnado being assigned one game to guard Walkerville’s star player, who averaged about 30 points per game, and doing a great job of it.

“Byron was a great team player who wanted the team to win,” Coach Goorman said. “He was a good kid to coach and would do anything you asked of him.”

Obviously that sort of character runs in the family, and WMC basketball continues to reap the benefits.