Kent City girls fight back hard in the fourth quarter, come up just two points short in their bid for a state championship

EAST LANSING – After three years of falling short in the state tournament, the talented Kent City girls basketball team was really hungry for a championship.

So hungry, in fact, that the Eagles overcame a bad second quarter, battled back from a 10-point deficit in the fourth, and came very close to pulling out a win in the Division 3 state championship game on Friday afternoon. 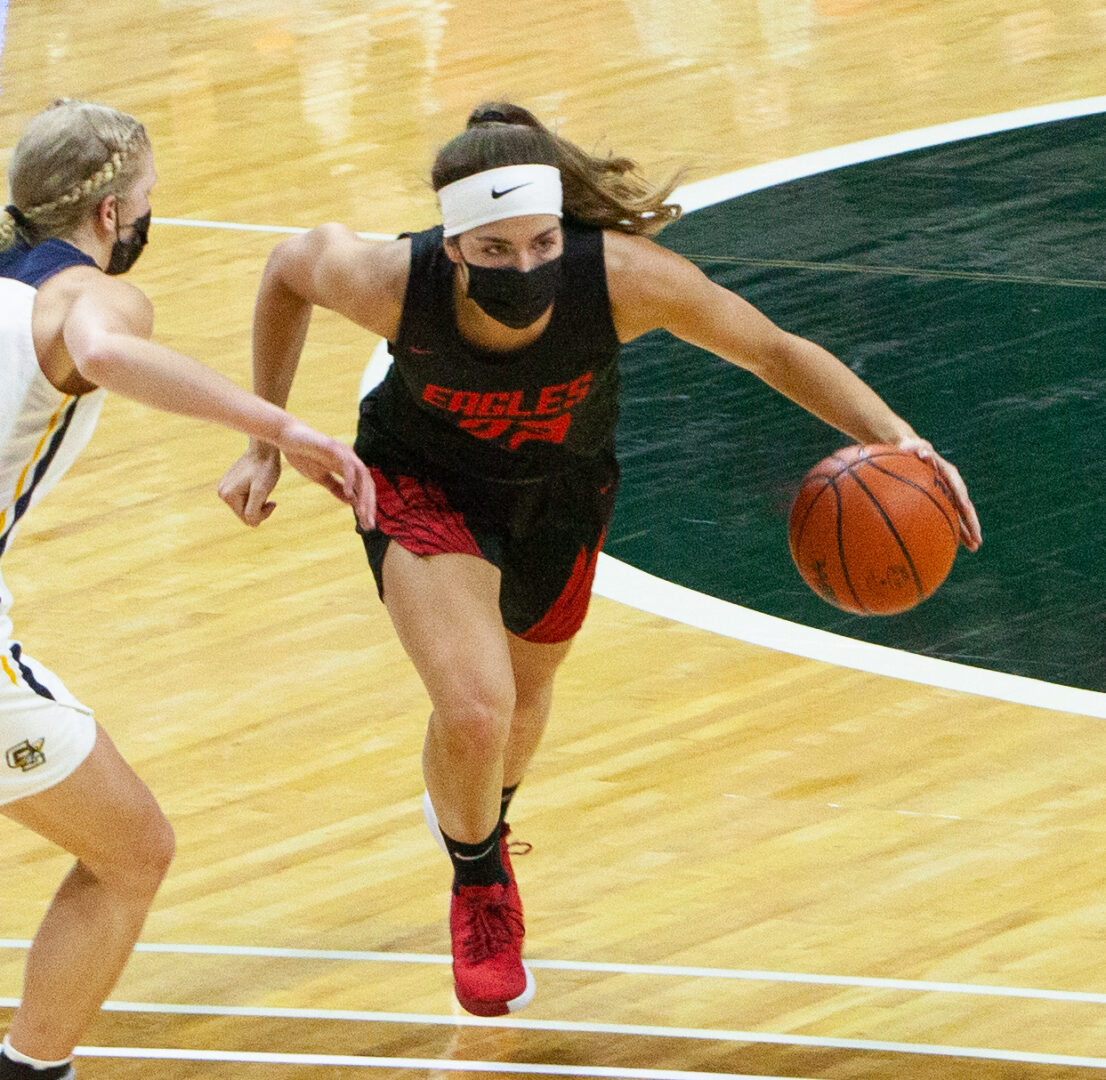 It was Kent City’s first defeat of the season, in its last and most important game of all.

Eagles Coach Scott Carlson was disappointed after the game, but proud of the way his players fought until the end and made a tight game of it.

“With that type of deficit, the team could have just rolled over and said this is over,” said Carlson, when asked about the fourth quarter comeback. “I’m proud of them. I’m proud of their effort and how hard they practice. It’s a great group of girls.”

Jenna Harrison goes in for a layup for Kent City. Photo/Jason Goorman

The Eagles made it as far as the state quarterfinals in 2018, and regionals in 2019 and 2020, but lost to a great team from Pewamo-Westphalia each year. The last two of those losses were by a combined total of five points.

This season, with senior standouts Kenzie Bowers and Jenna Harrison back in the lineup, and several strong underclassmen with them, they were determined to finally live out their dream.

They won their first 21 games of the season, most of them by very significant margins. Along the way they rolled to a CSAA Silver Division title and Division 3 district and regional championships.

But the competition got tough in the state Final Four, where the Eagles had to fight hard to beat a good Calumet team 59-53 in the semifinals on Wednesday, then finally met their match in Grass Lake.

The Warriors are a quick team that plays tough defense, has a great transition game and hits a lot of three-pointers. That combination was just enough to keep Kent City one win shy of its ultimate goal.

“There are so many things that could have been the big difference (in the game),” said Carlson, whose team finished 21-1 on the season. “In the end they were two points better, I guess. I would love the chance to play them again.”

The Eagles looked good in the first quarter, when they traded buckets with the Warriors and came away with an 18-14 lead at the first buzzer.

They hit four triples in the quarter, including two from Taryn Preston, and were 7 of 13 from the floor. 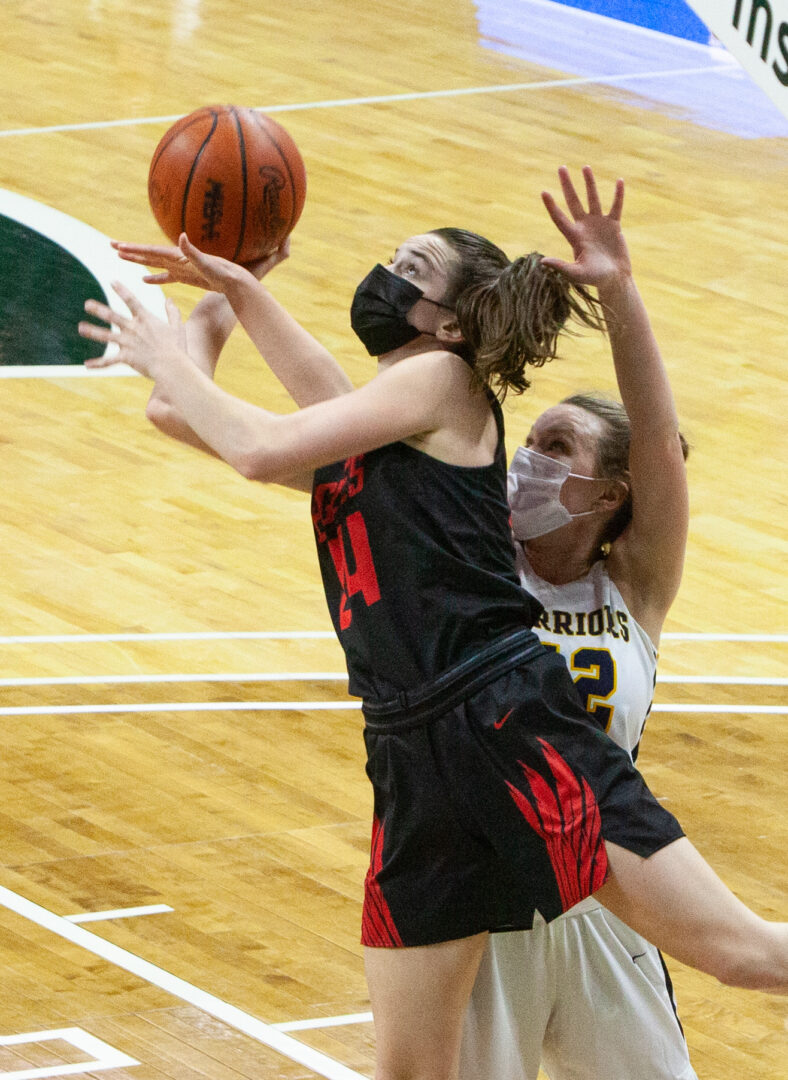 Kent City’s Madelyn Geers tries to get a shot up from under the hoop. Photo/Jason Goorman

But that type of shooting, which has propelled the Eagles for the past few years, went south in the second quarter, when they only made two buckets and were outscored 16-6.

Lexie Bowers hit a triple for Kent City just 35 seconds into the second quarter, but then the Eagles missed their next six shots over the next four minutes. Grass Lake had a 6-3 run over the final 1:49 of the quarter and led 30-24 at halftime.

“We weren’t moving well on offense, we weren’t running out offense great, we didn’t get a few stops, and I think it hurt us a little bit,” said Kenzie Bowers, Kent City’s leading scorer who finished her varsity career with more than 1,500 points. “It was just a great game, they’re a great team with great players and they’re well-coached.”

Grass Lake opened the third quarter with a pair of “and one” three-point plays to pull ahead 36-24 less than two minutes into the half. Each team ended up with 10 points in the quarter, and Grass Lake went into the fourth with a 40-34 lead. 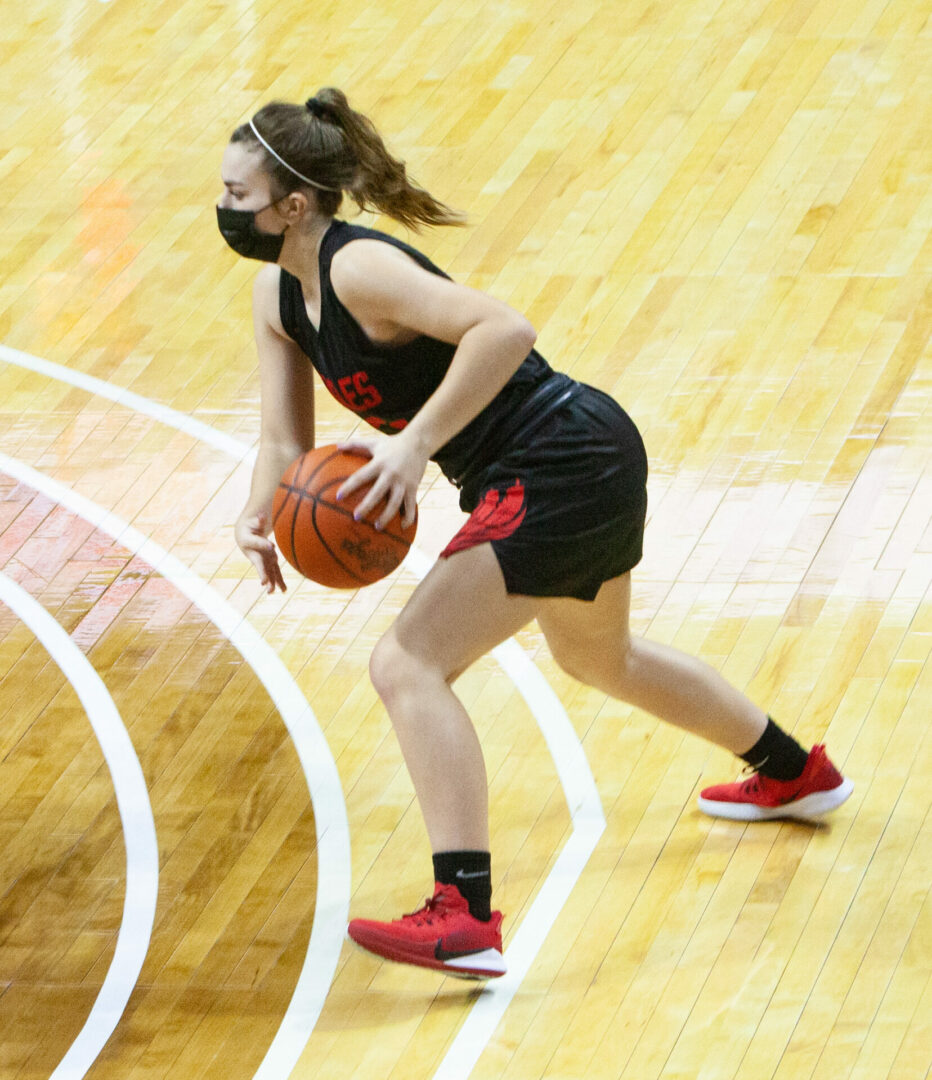 Grass Lake’s Bargesser hit a pair of layups to start the final quarter, the Warriors led 44-34, and it looked like Kent City’s hopes were fading away.

But the Eagles put up a battle all the way to the end, despite Grass Lake’s effort to go into a stall offense and kill off the clock.

Kenzie Bowers hit a three-pointer with about five minutes left, and Harrison had a steal and a three-pointer about 30 seconds later, and suddenly the Eagles had cut their deficit to 44-40.

Kenzie Bowers made one of two free throws with 2:11 left to make it 46-44. Grass Lake’s Abrie Cabana sank a layup nine seconds later to give her team a four-point edge, then Maddie Geers answered with a layup for the Eagles, leaving the score 48-46 with 1:31 remaining. 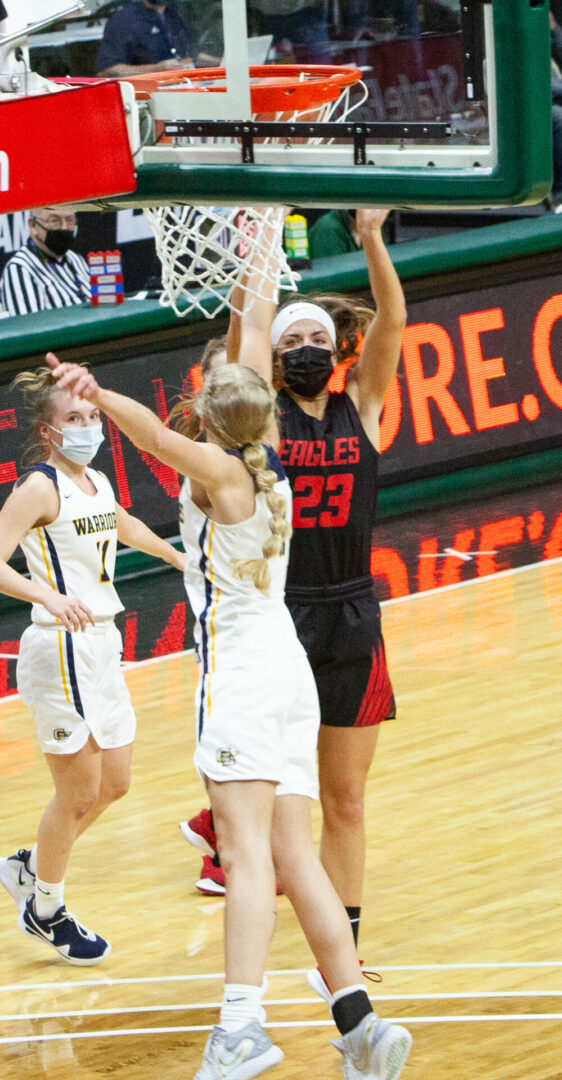 Kenzie Bowers hits a shot at the buzzer at the end of the first quarter. Photo/Jason Goorman

Bargesser downed two free throws with 35 seconds left, then Kenzie Bowers made a layup 13 seconds later, leaving Grass Lake with a 50-48 edge with 23 seconds on the clock.

Bargesser made two more free throws with 10 seconds remaining, then Harrison hit a bucket for Kent City at the final buzzer, but the Eagles’ comeback fell two points short.

The tears flowed a bit for the Eagles after the game, but Coach Carlson said the close loss could not erase what was otherwise an amazing season.

“These girls played absolutely fantastic,” he said. “They worked their tails off the whole offseason on their own, because we couldn’t be with them. The seniors got everybody involved and held them accountable.”

Carlson said he will miss those two seniors – Kenzie Bowers and Harrison, who powered the offense and led the dynamic team. 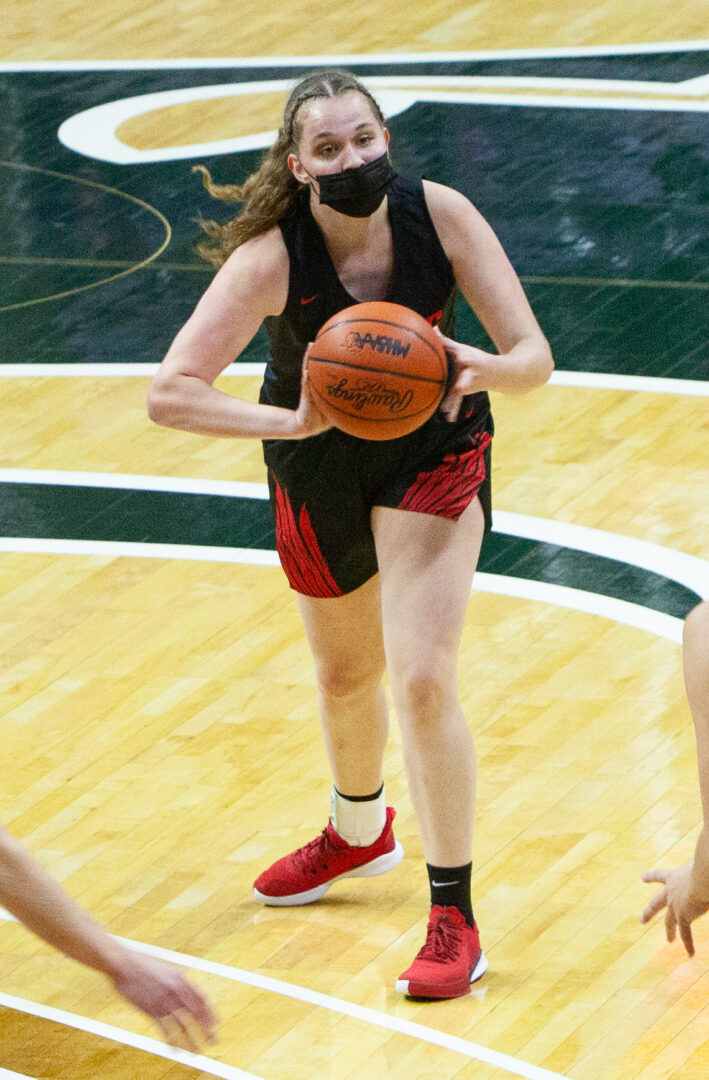 Emmalyn Geers makes a pass from the top of the key for Kent City. Photo/Jason Goorman

Kent City takes the floor after a timeout. Photo/Jason Goorman 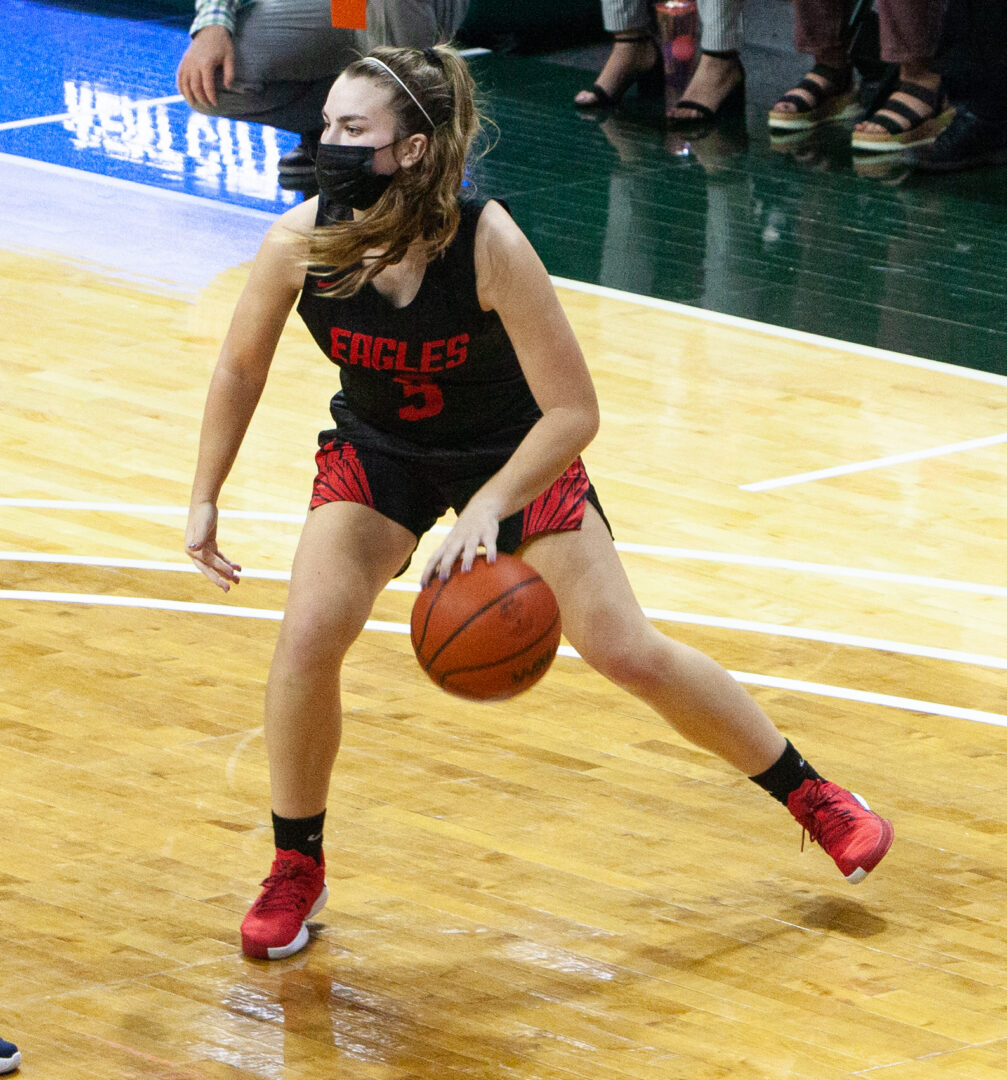 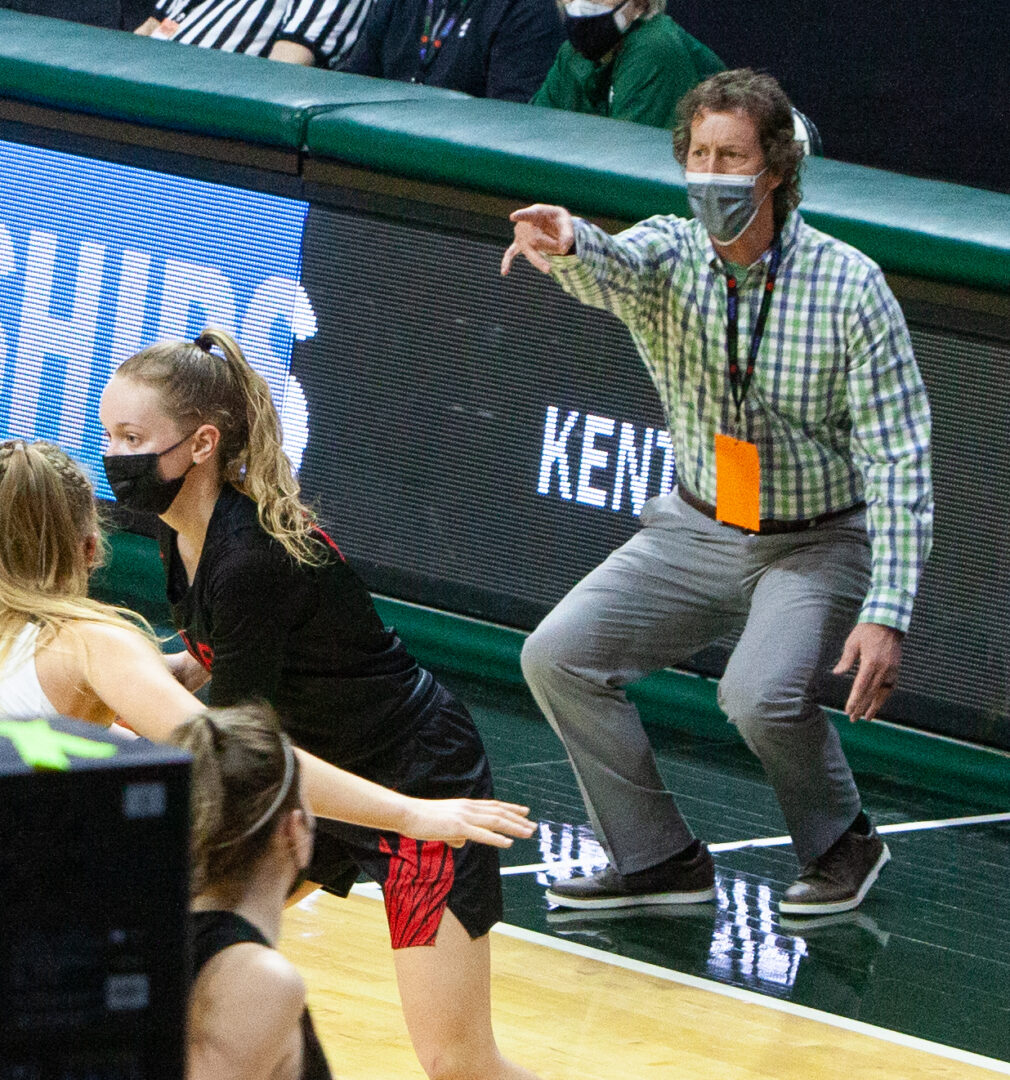 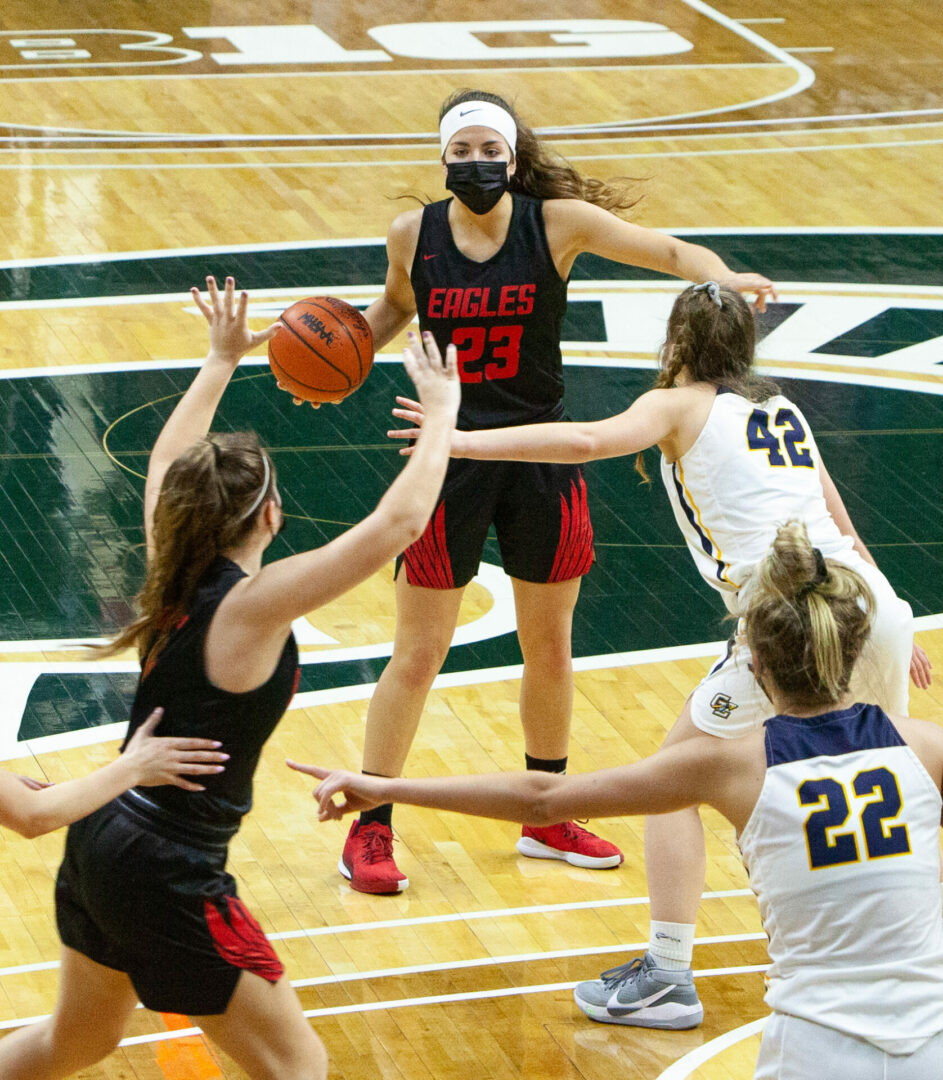 Kenzie Bowers directs traffic from the top of the key. Photo/Jason Goorman 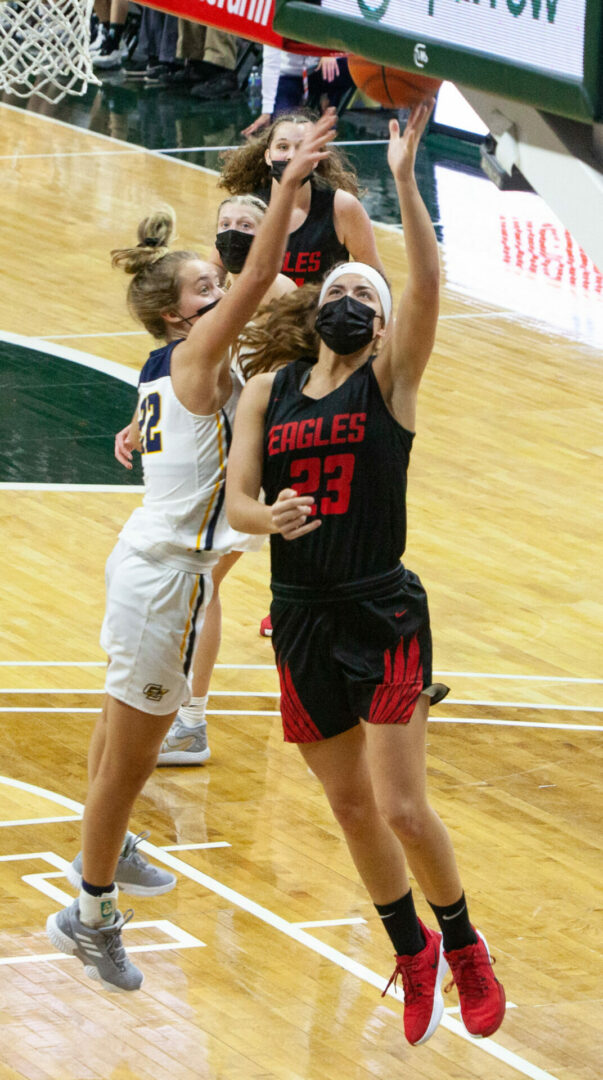 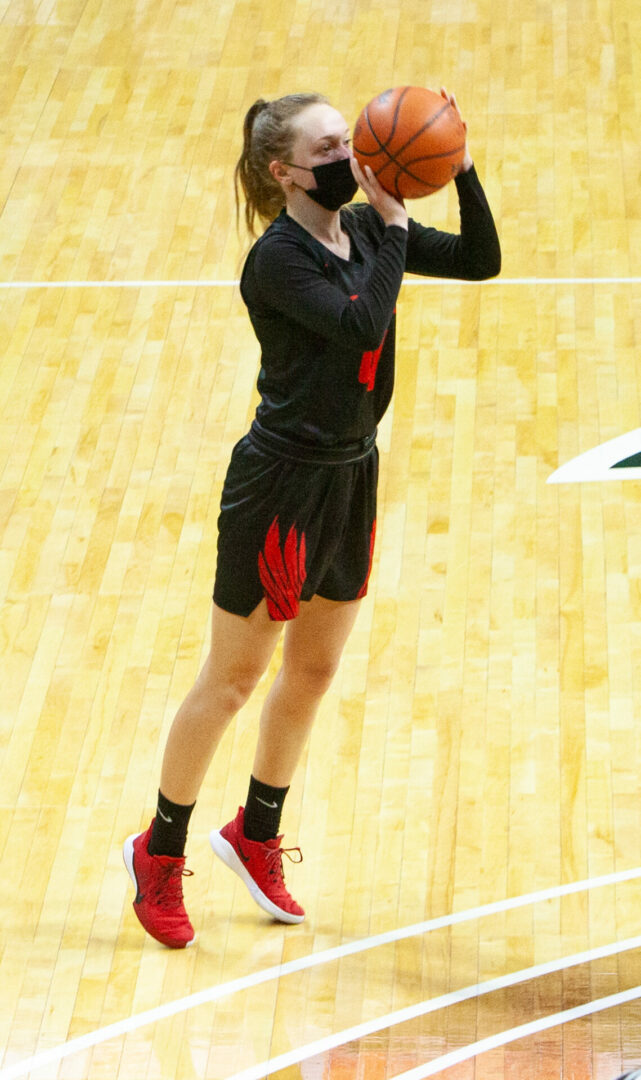 Jenna Harrison gets ready to take a 3-pointer for Kent City. Photo/Jason Goorman 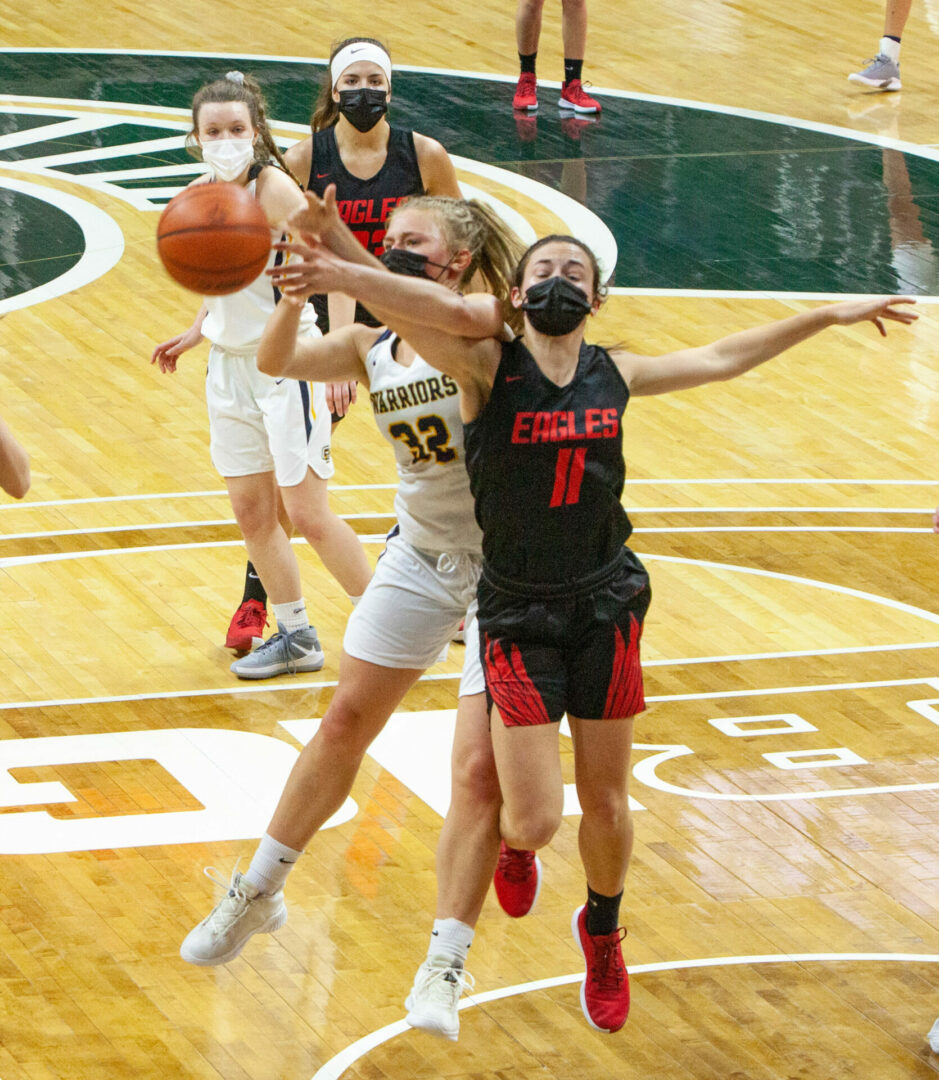 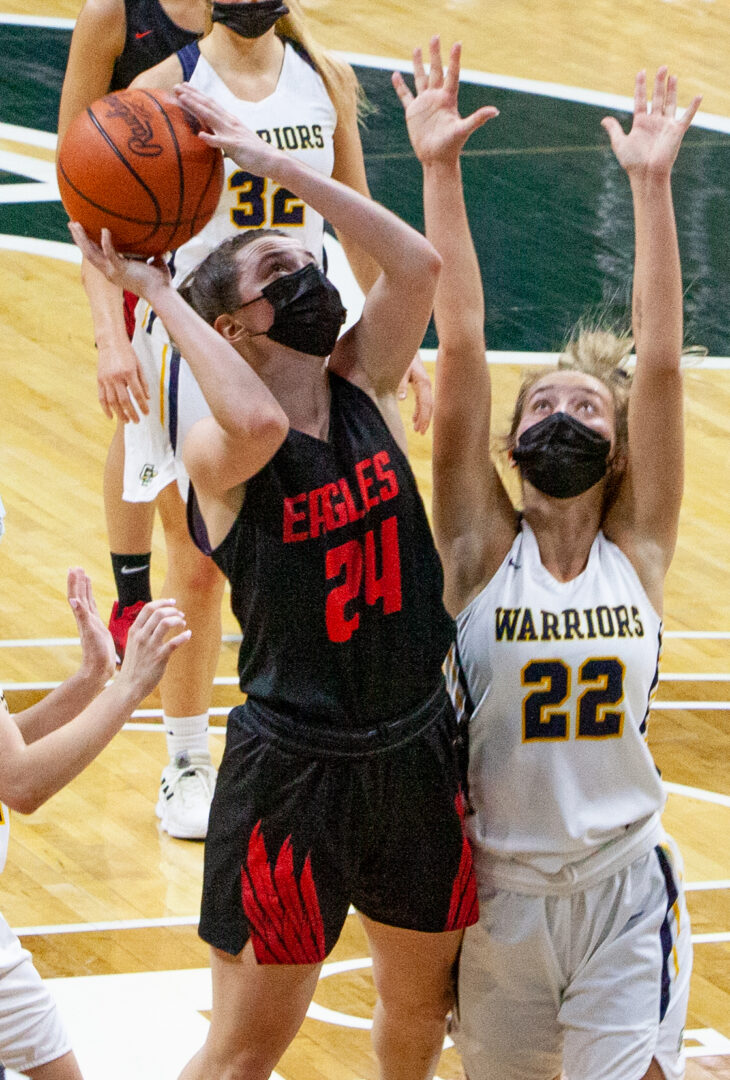 Madelyn Geers goes in for a layup for Kent City. Photo/Jason Goorman