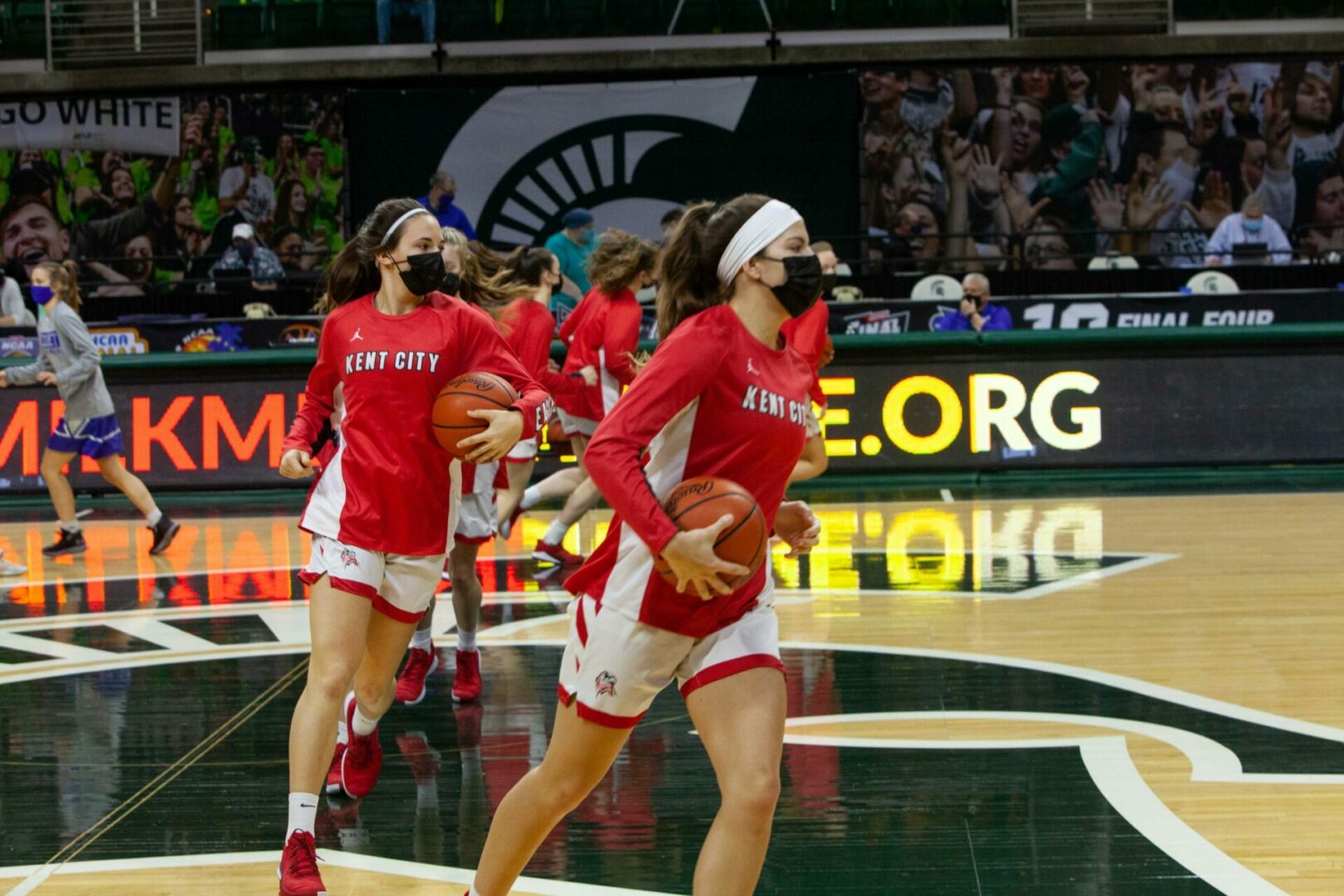 EAST LANSING – Now we know how the Kent City girls basketball team reacts when faced with a close game:

Good enough to make it through to the state finals. 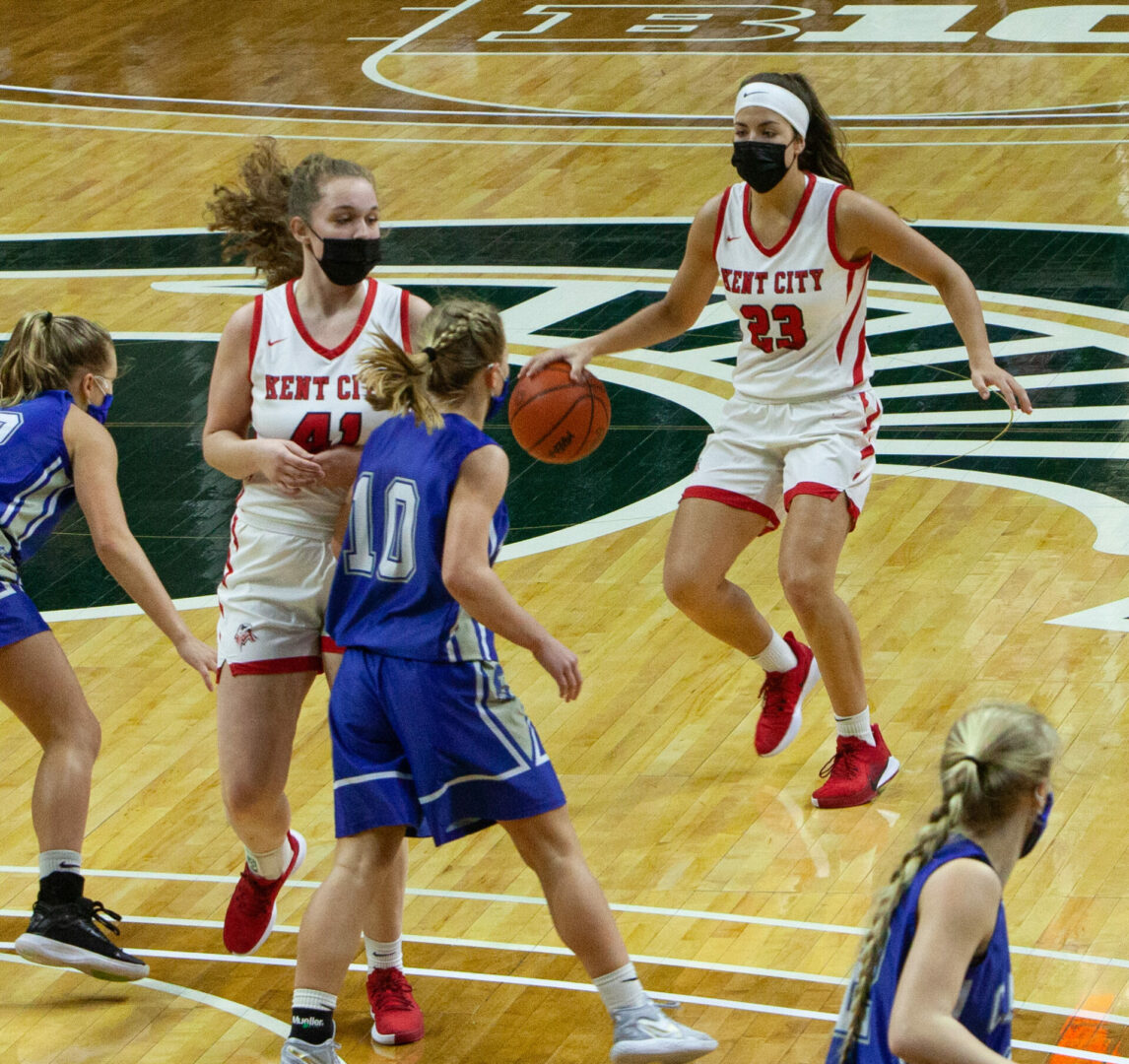 Kenzie Bowers dribbles the ball at the top of the key as teammate No. 41 Emmalyn Geers goes to her spot. Photo/Jason Goorman

The Eagles, making their first ever appearance in the state Final Four, struggled early in their Division 3 semifinal game against Calumet on Wednesday.

Their specialty three-point shots weren’t falling, they were turning the ball over, and Calumet was giving them everything they could handle.

Kent City finally got hot from three-point land and built a 10-point lead early in the fourth quarter, then used a slowdown strategy to kill the clock and get to the free throw line.

The free throw performance was not perfect, with five missed attempts down the stretch, but it was  enough to seal 59-53 victory over Calumet and a berth in Friday’s state championship game. 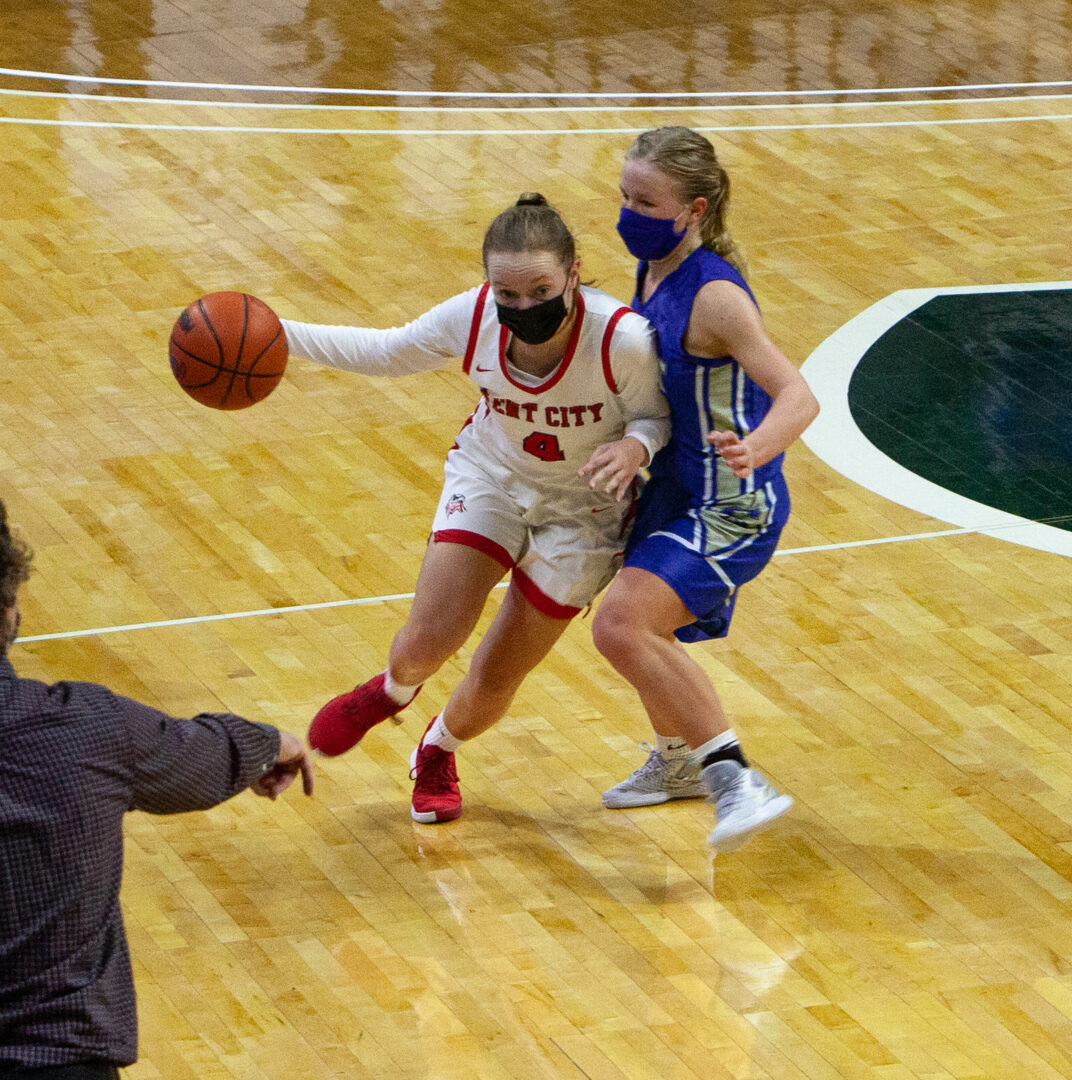 Jenna Harrison dribbles up the side of the court for Kent City. Photo/Jason Goorman

Kent City will face Grass Lake on Friday at 3:30 p.m. in the title game at the Breslin Center at Michigan State University. Grass Lake won its semifinal by forfeit, after Hemlock pulled out of the game for unspecified reasons.

The close encounter was a rarity for Kent City, which came into the game with a perfect 20-0 record, and only had one game with a final margin of less than 10 points.

But Calumet also came in with a 20-0 record, could hit three-pointers just like the Eagles, and played a tough zone defense.

Both teams came out cold in the first quarter. Kent City made only 3 of 13 shots from the floor, turned the ball over five times, and came away tied 7-7 at the first buzzer. 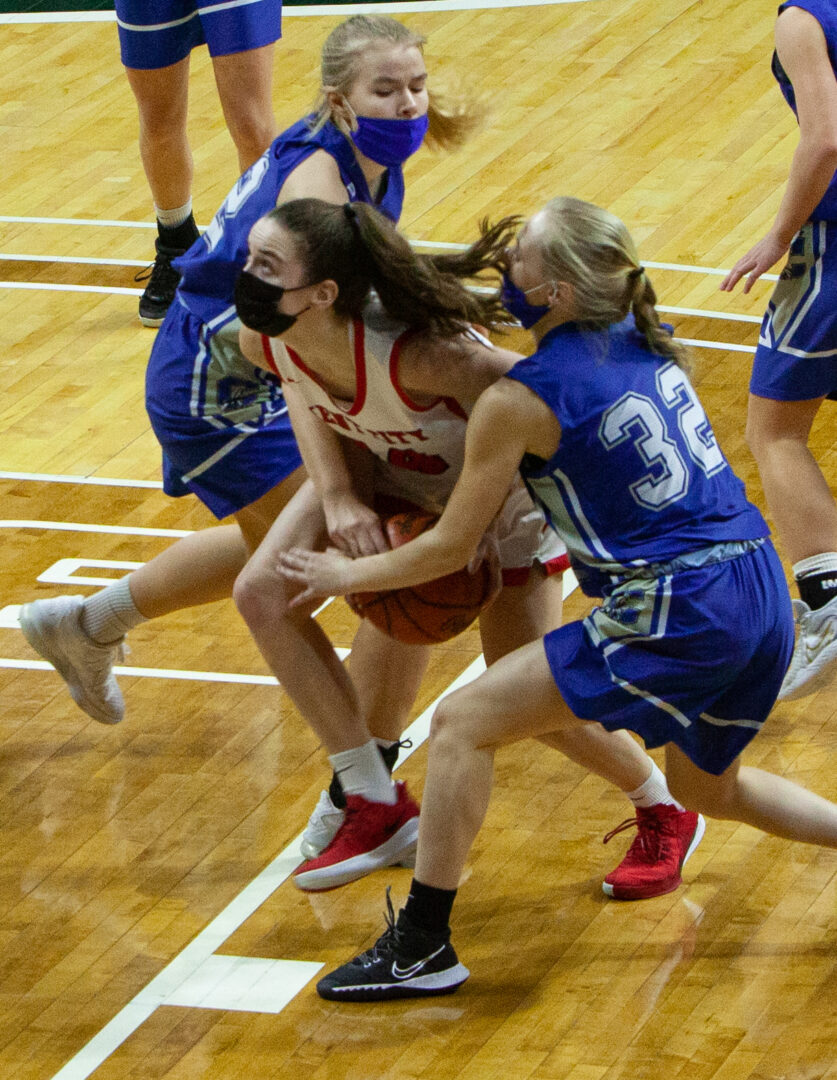 A good example of how cold the Eagles were came midway through the quarter, when they missed five three-point attempts in one possession. They got the offensive rebound after every shot and kicked it back for another try, but nothing was going down.

That all changed in the second quarter, when both offenses found their groove and combined for six triples.

Kent City’s Jenna Harrison opened the quarter with a three, Calumet’s Marybeth Halonen answered, and the scoring race was on.

Calumet pulled ahead 17-12 with 4:41 left in the first half. Then Kent City sophomore Lexie Bowers got real hot, hitting three triples and a free throw over the last 4:20 of the quarter, and the Eagles clung to a 24-22 lead at halftime.

“I think it was more a matter of us being shocked by such a big game in a big arena,” said Kent City Coach Scott Carlson about his team’s shaky start. “Once we settled down and started hitting our shots, things went our way.” 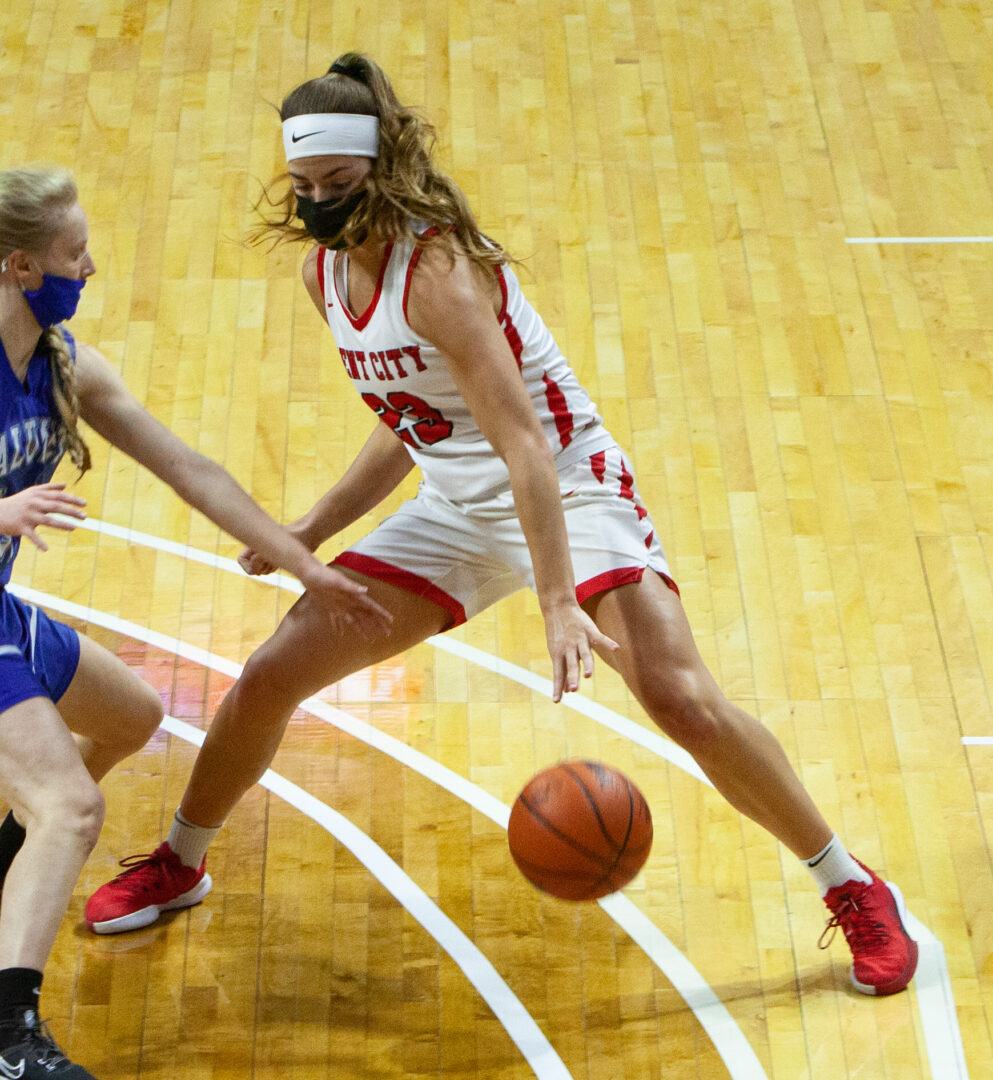 Calumet grabbed a 28-24 lead in the first two minutes of the third quarter, then Kent City went on a sudden 10-0 run and had a 34-30 advantage. The Eagles outscored the Copper Kings 25-11 over the last six minutes of the quarter, with Harrison capping the run with a three at the buzzer, and led 49-41 headed into the fourth.

Harrison finished with nine points in the third for the Eagles, including two triples. Kenzie Bowers and freshman Maddie Geers each added seven, including one three-pointer apiece.

“We knew the shots would even out, and that’s what happened in the third quarter,” Harrison said.

Kent City took a 52-41 lead early into the fourth quarter, then went into a slowdown offense, passing the ball and waiting to be fouled, so they could ice the win with free throws. 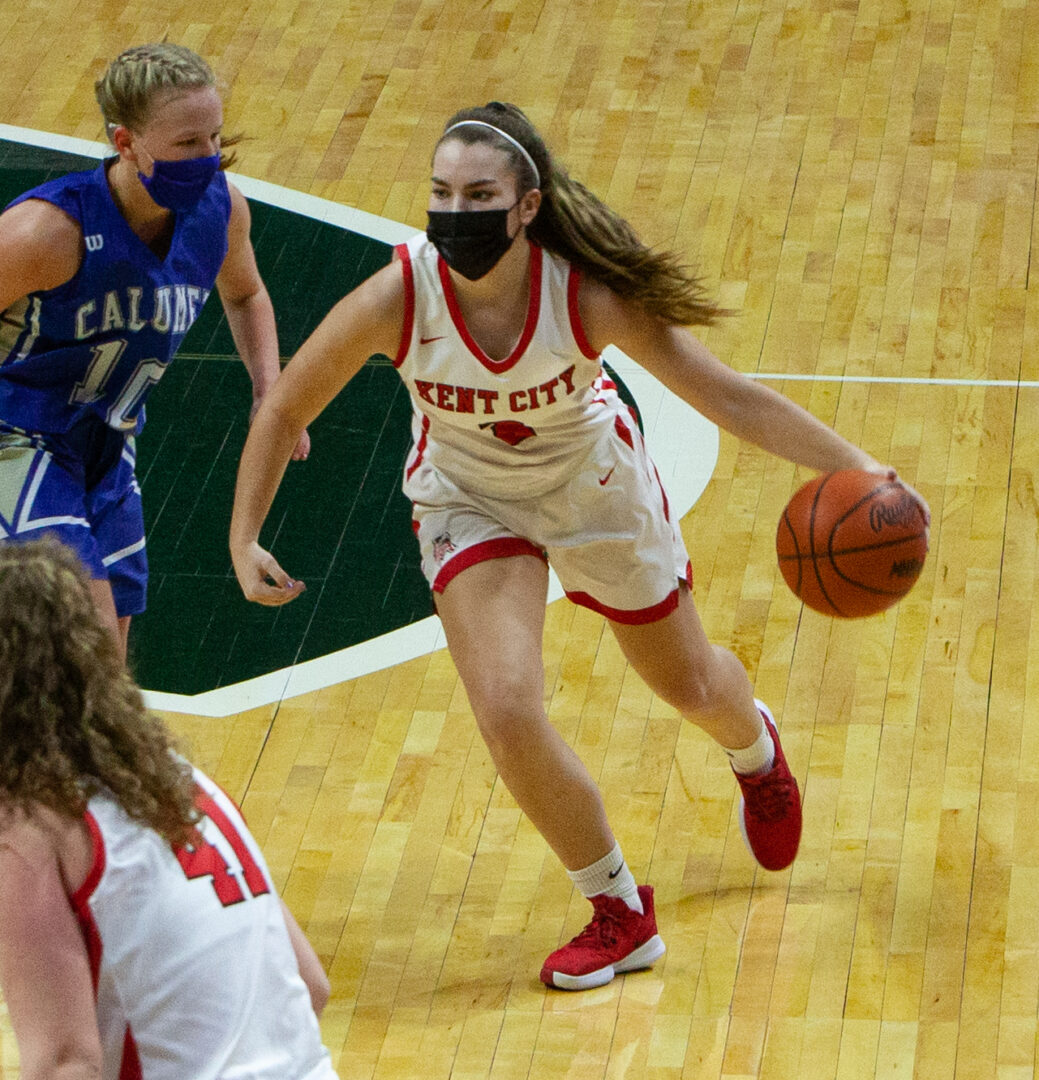 But Calumet kept battling. Jana Loukus hit a triple for the Copper Kings, then Halonen added a steal and layup seconds later, making the score 54-48.

Calumet’s Elli Djerf nailed a triple with 37 seconds remaining, making it a 57-53 game, but Harrison hit two free throws with 24 seconds left to nail down the victory.

Kent City missed a few important free throws in the fourth quarter, but still sank 9 of 14 from the line.

“We certainly would have loved to hit all the free throws.” Carlson said. “It was a relief getting to the double bonus, where we knew we’d at least hit one of two.”

The coach admitted his team wasn’t at its best at times, but was still plenty good enough to get within a game of a state title.

“We had those turnovers in the first half, along with the missed free throws down the stretch, and were still able to come away with a win,” Carlson said.

Djerf finished with a game-high 22 points for Calumet. 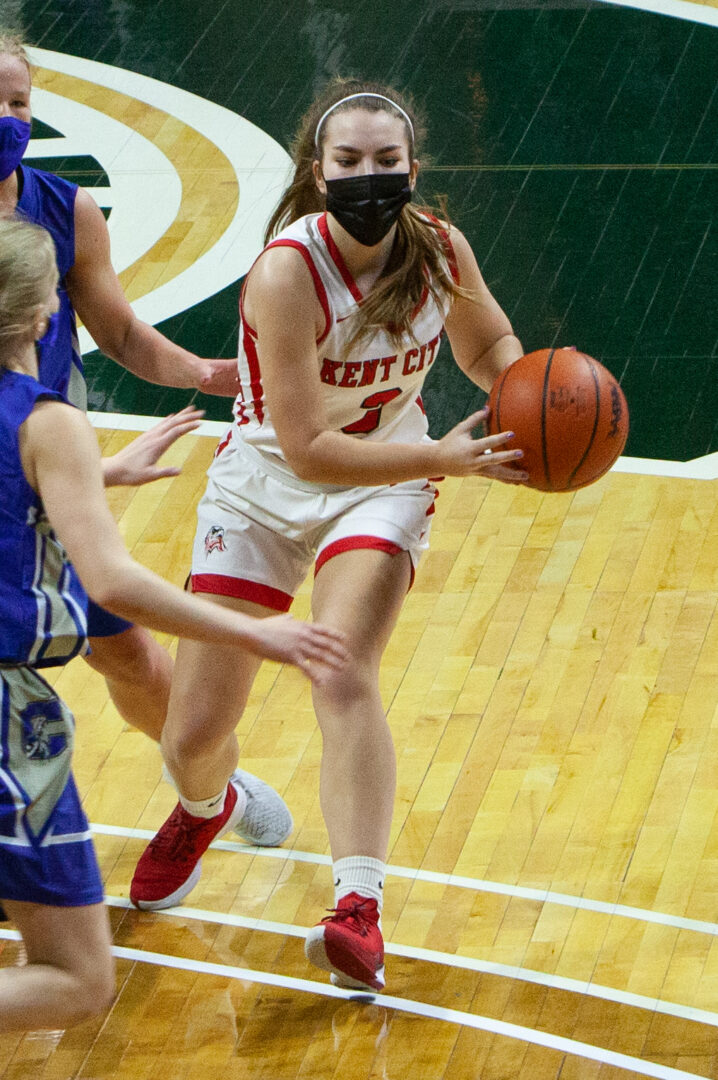 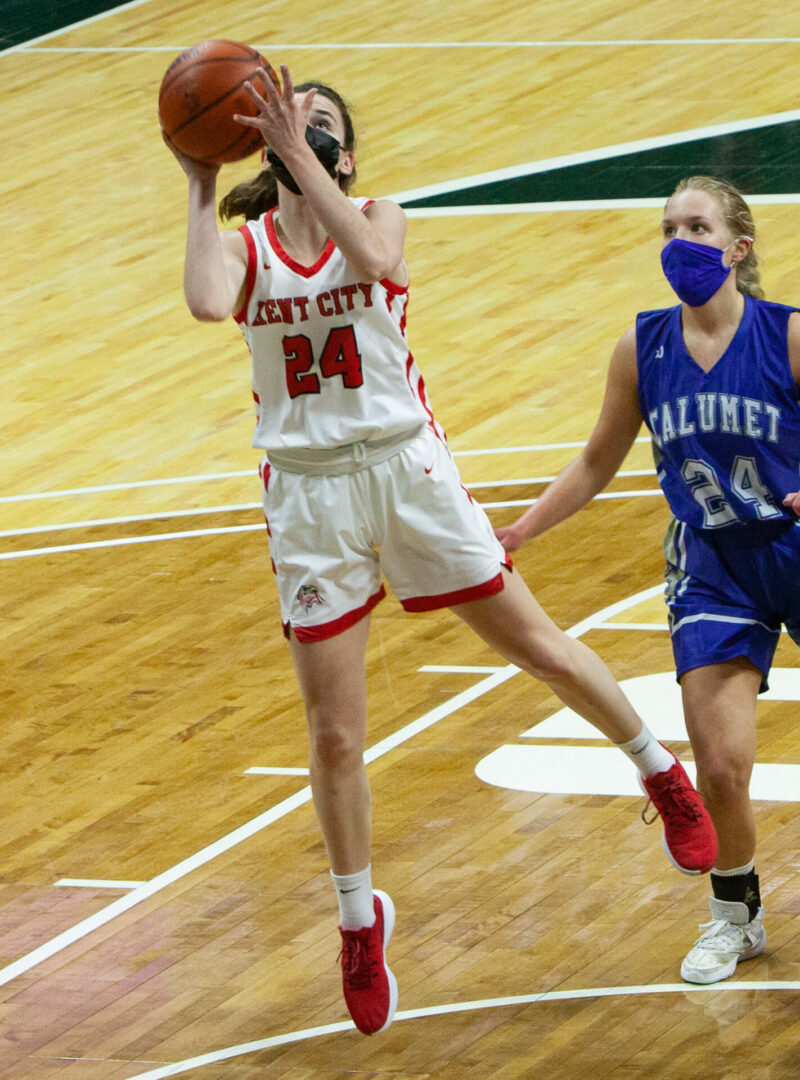 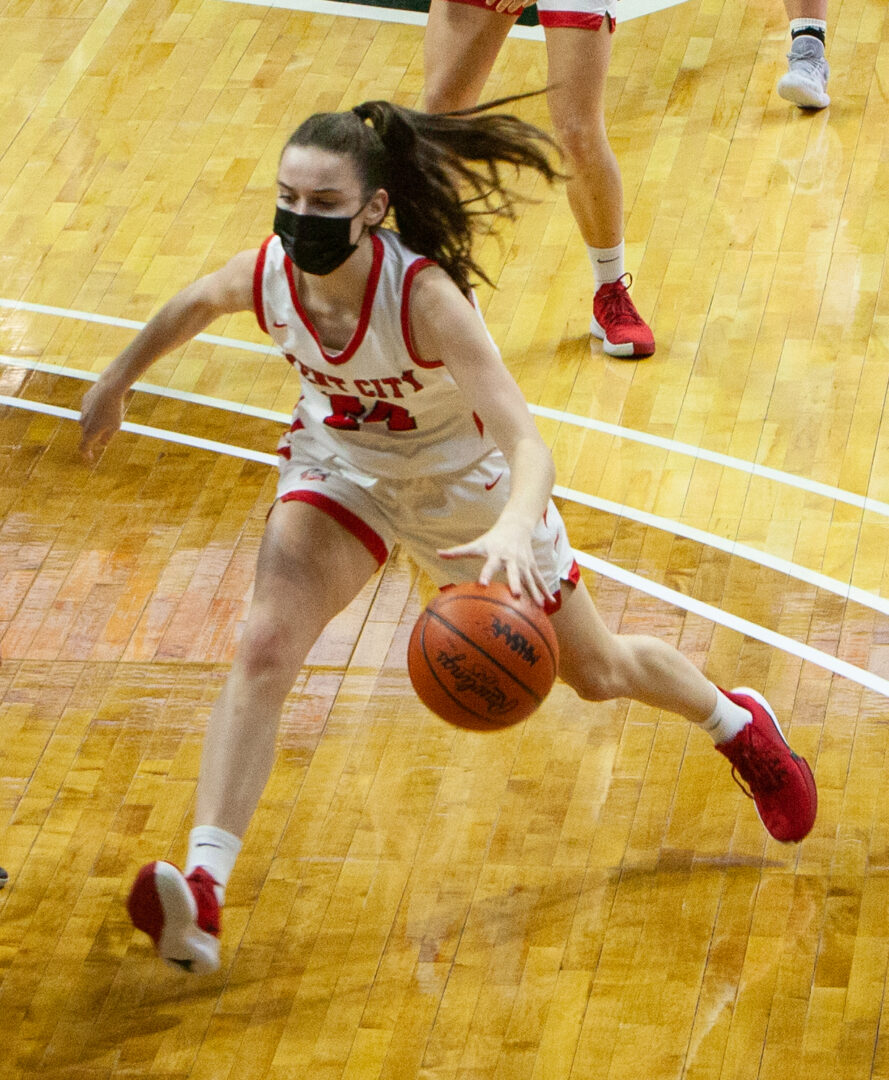 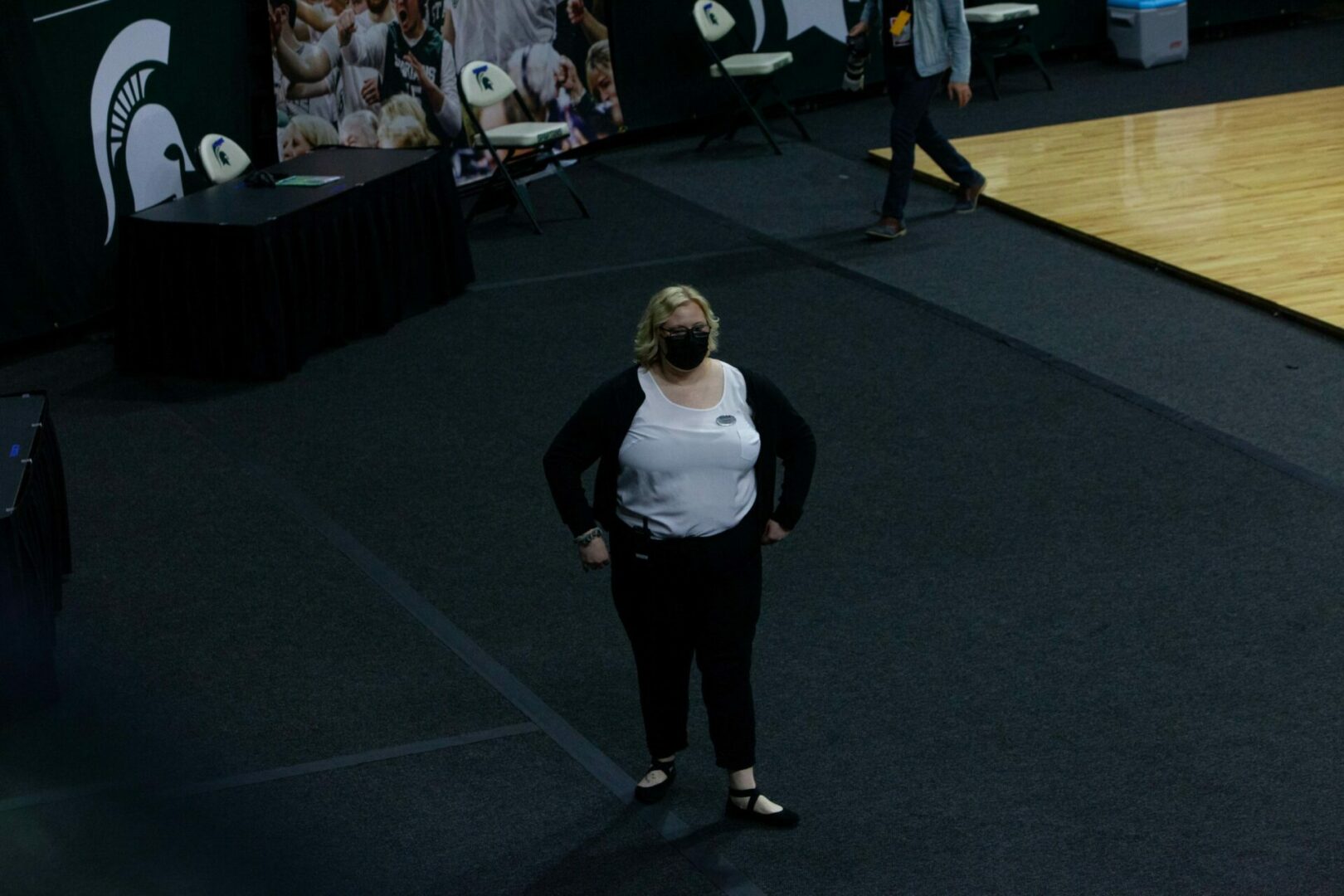 A Breslin mask monitor looks up in the stands to point out anyone not wearing a mask properly. Photo/Jason Goorman 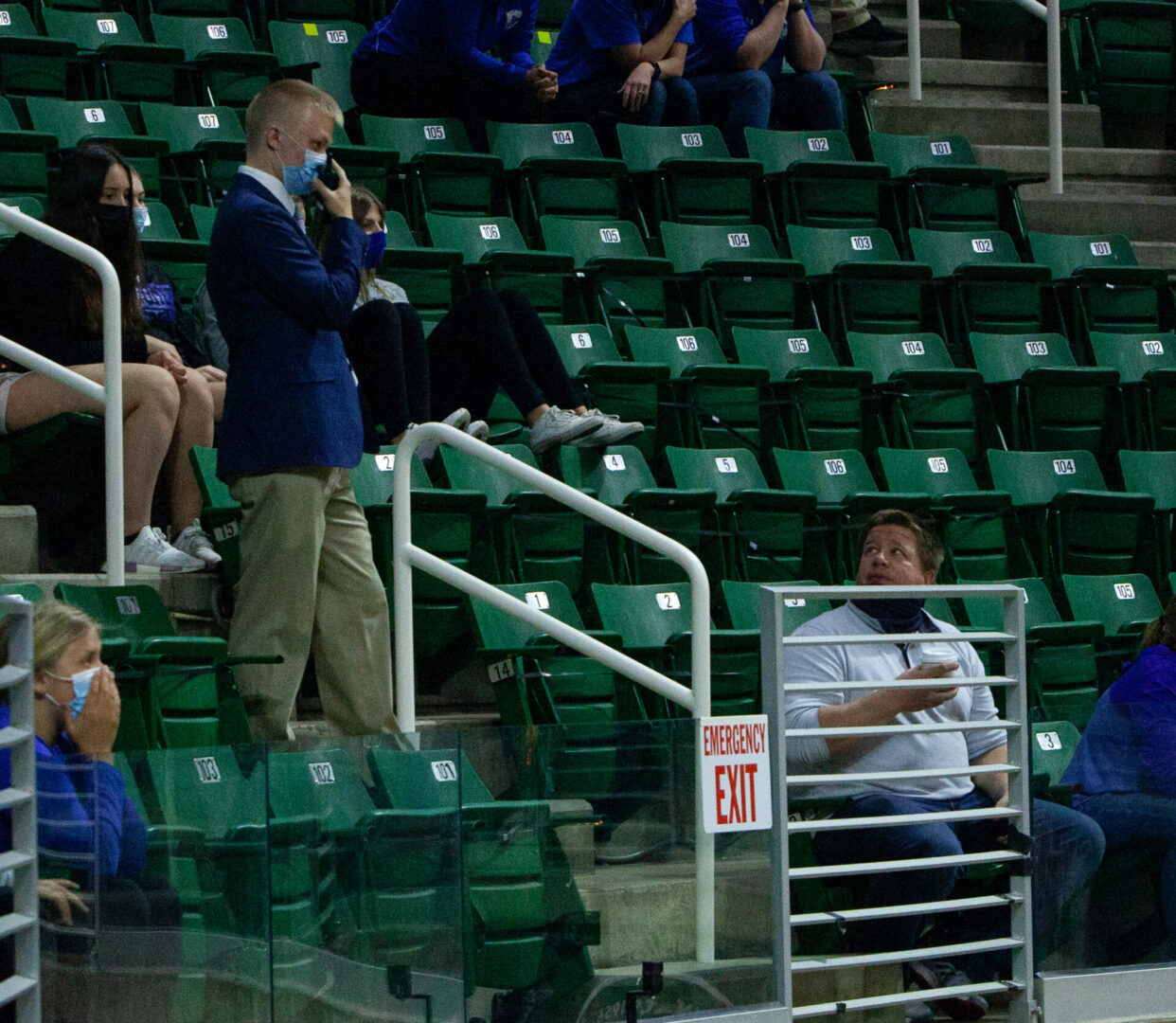 A Breslin usher stares down a Calumet fan drinking with his face covering down. Breslin staff was strictly enforcing face covering rules with spotters on the court level radioing to ushers in the stands where fans were not properly covered. Photo/Jason Goorman 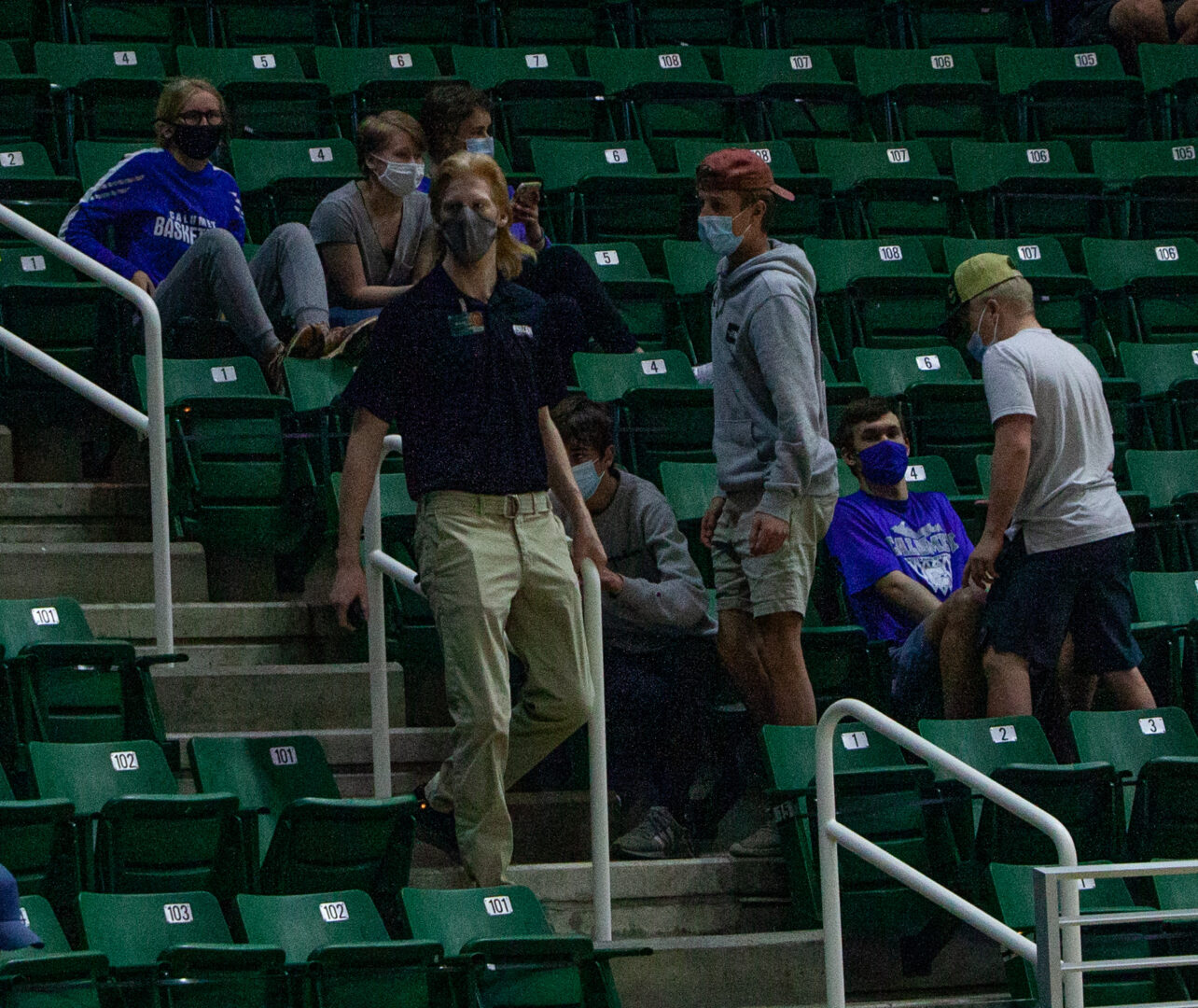 An usher walks away from a group of Calumet students who he instructed to wear their face coverings properly. Photo/Jason Goorman 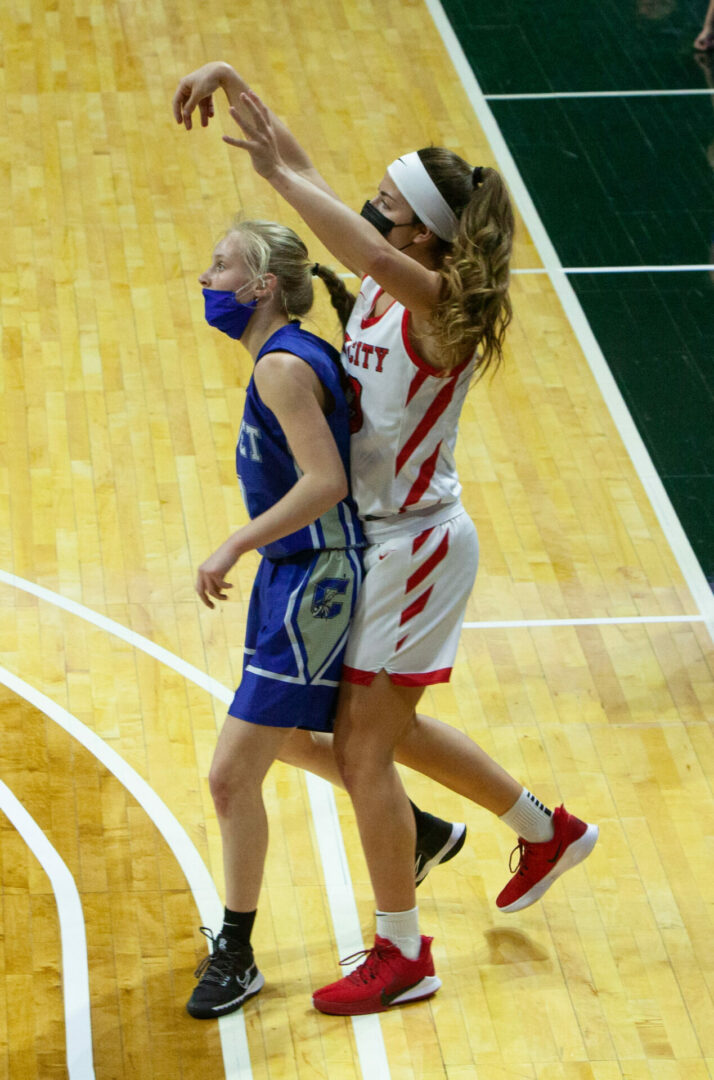 Kenzie Bowers follows through after taking a 3-pointer from the corner for Kent City. Photo/Jason Goorman 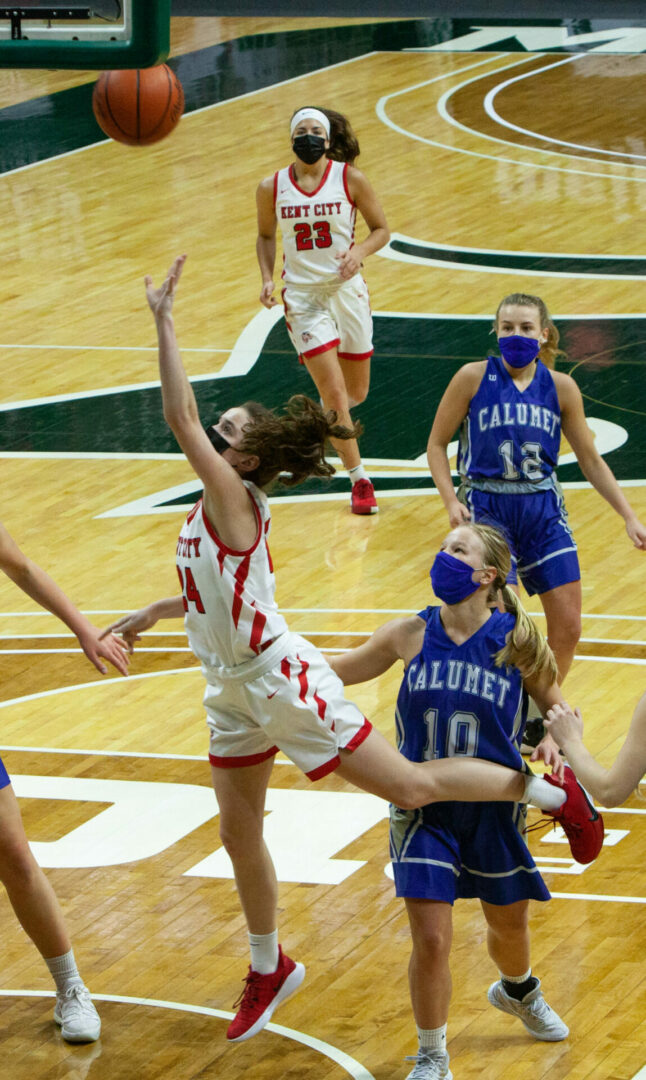 Muskegon Lumberjacks pushed to brink of elimination with loss in Dubuque

Ludington’s fast start stalls out in their football matchup with Manistee.