Lumberjacks beat Dubuque 5-1, clinch a playoff spot, and pull within two points of Chicago in the race for first place

MUSKEGON – The Muskegon Lumberjacks officially qualified for the USHL playoffs with a 5-1 home ice victory over Dubuque on Thursday, which is hardly

The Jacks have been good all year, and really great in recent weeks, so a playoff berth was all but guaranteed.

The really fun part is what could happen before the playoffs even begin, because the Jacks have a chance to finish at the top of the league.

The Lumberjacks have been chasing the first-place Chicago Steel for most of the season in the USHL’s Eastern Conference. At one point the Steel had a double-digit point lead in the conference standings, and it looked like the race was all but over.

But the Lumberjacks have been extremely hot, winning 15 of their last 17 games (including five in a row), and are now just two points (one victory) behind the Steel in the conference standings, with seven regular season games remaining. 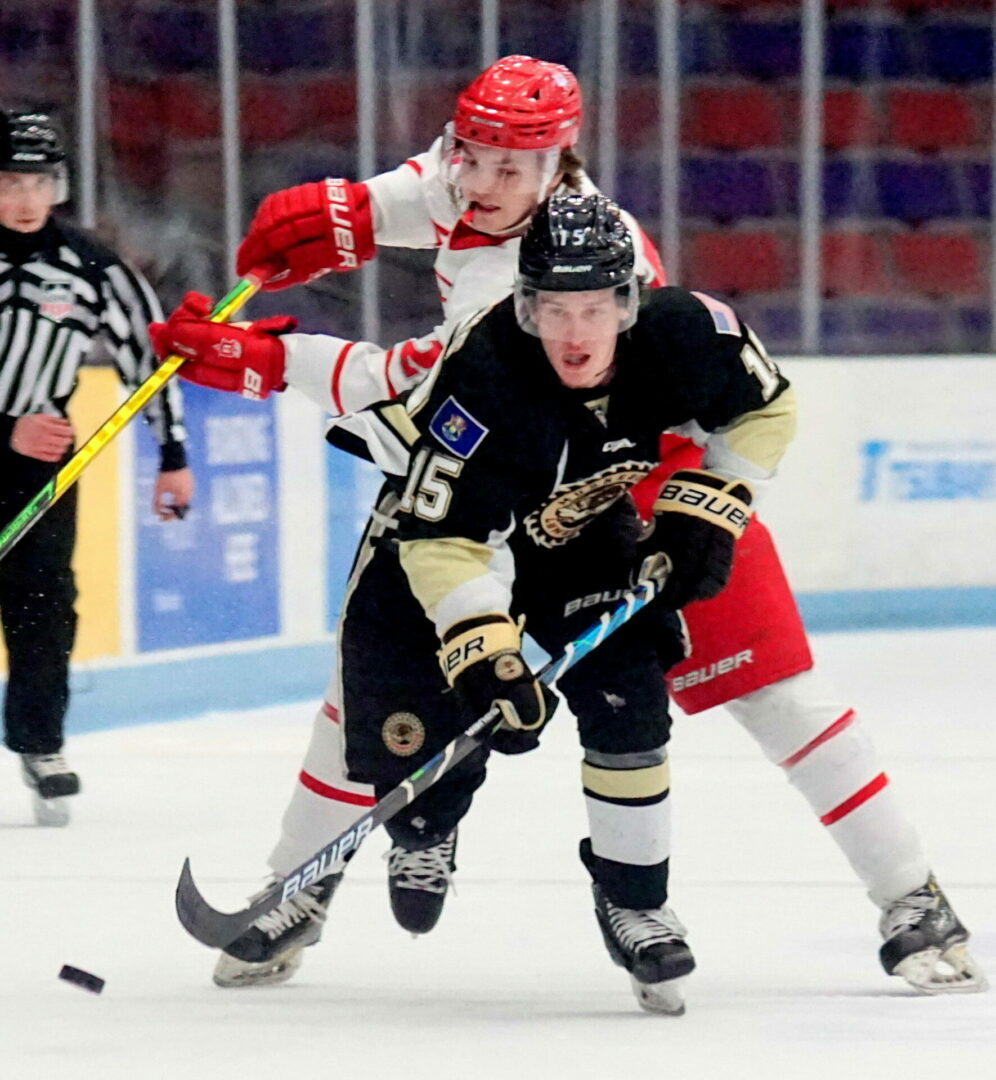 The last two regular season games are in Chicago on April 23-24, so that weekend could be a showdown for the conference championship, and perhaps the Anderson Trophy, which goes to the team in the league with the most regular season points.

Chicago currently has 67 points, Muskegon has 65, and Western Conference leader Tri-City has 59.

“We knew that tonight was the one that if we get two points we get to clinch (a playoff berth), and now we are two points behind Chicago,” said Lumberjacks Coach Mike Hamilton. “Right now we are focused on winning hockey games. Our number one goal is to make sure we have home ice for the playoffs. We just have to keep taking care of business, and probably be a little bit sharper than we were tonight.” 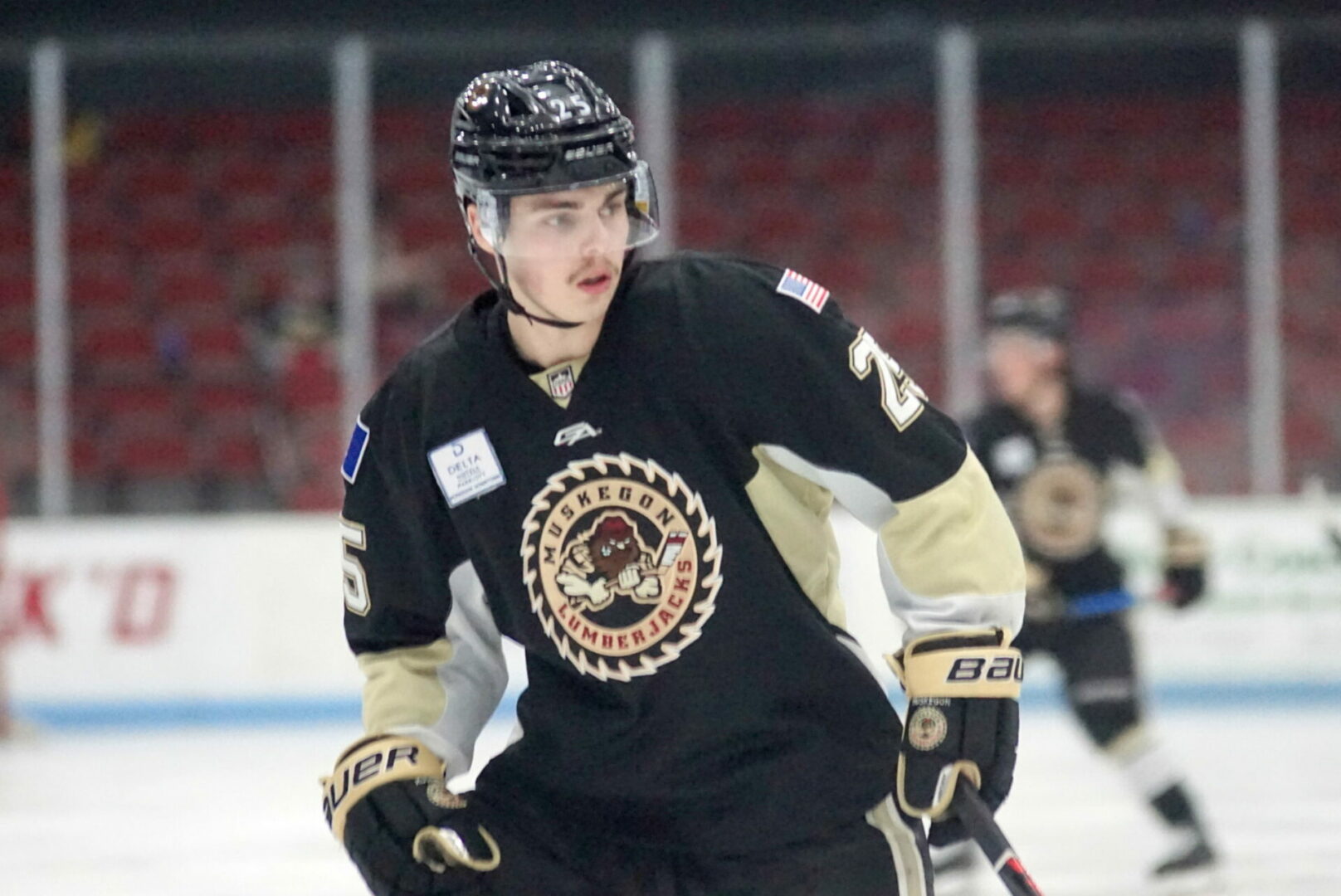 Muskegon’s No. 25 Nick Portz skates back on defense. Photo/Leo Valdez

Before any of the exciting stuff can play itself out, the Jacks have to deal with the lesser opponents remaining on their schedule, starting with Dubuque, which came to town for a three-game series this weekend.

Muskegon dominated Thursday night’s opener from start to finish, collecting goals from five different players and a strong performance in goal from Nate Reid, who stopped 33 of 34 Dubuque shots.

The biggest star of the night was defenseman Jacob Guevin, who had assists on three of the goals. He now has 33 assists on the season, which puts him seventh overall in the league, second among defensemen in the league, and first among the Lumberjacks.

Somebody has to get the puck to the guys who score the goals, and Guevin does it a lot.

“He just has a good mind and he is so good with the puck,” Hamilton said about Guevin. “That guy is an NHL talent. People question his size, but you look at him with the puck and how he defends, he is a special hockey player. He gets pucks to the net and his first pass is really good.”

Guevin said he always thinks defense first, but admits he has a knack for setting up goals.

“I play with really good teammates, and I think my hockey IQ is my best quality,” he said about his penchant for assists. “ 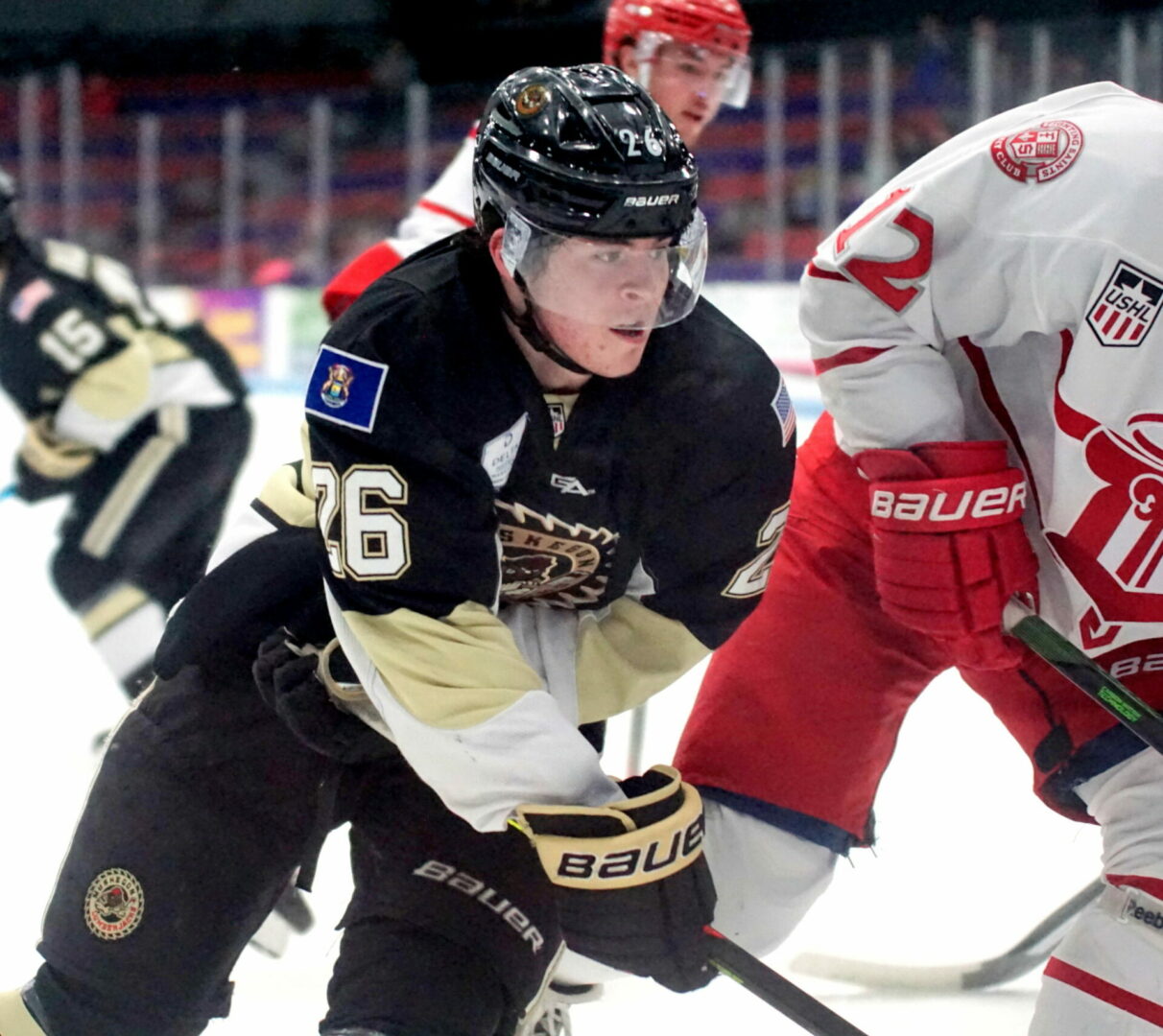 The Jacks led 2-0 after one period, following goals by Cameron Berg and Quinn Hutson.

Hutson’s goal might have been the prettiest of the night. He broke in on the Dubuque goal with Danil Gushchin, and they exchanged a couple sharp passes before Hutson deposited the puck in the net from close range.

Philip Tresca scored his third goal of the season at 2:44 of the second period to put Muskegon up 3-0.  Tanner Kelly tipped in a long shot by Gushchin at the 12:46 mark during a power play, the Jacks led 4-0, and Dubuque pulled goalie Lukas Parik in favor of Hobie Hedquist.

Dubuque broke the shutout when Robert Cronin scored on a power play at 15:52 of the second period.

Muskegon’s Brad Marek wrapped up the scoring with a nifty backhand shot in front of the net with about five minutes left in the contest.

The two teams will play again on Friday and Saturday nights at Muskegon’s Mercy Health Arena.