NORTH MUSKEGON – Every high school spring sport athlete has a lot to make up for this season, after losing their entire 2020 season to COVID.

But North Muskegon senior Hope Johnson has even more motivation than most.

That’s because Johnson, a very talented offensive player, has never been able to string together a completely healthy varsity season. 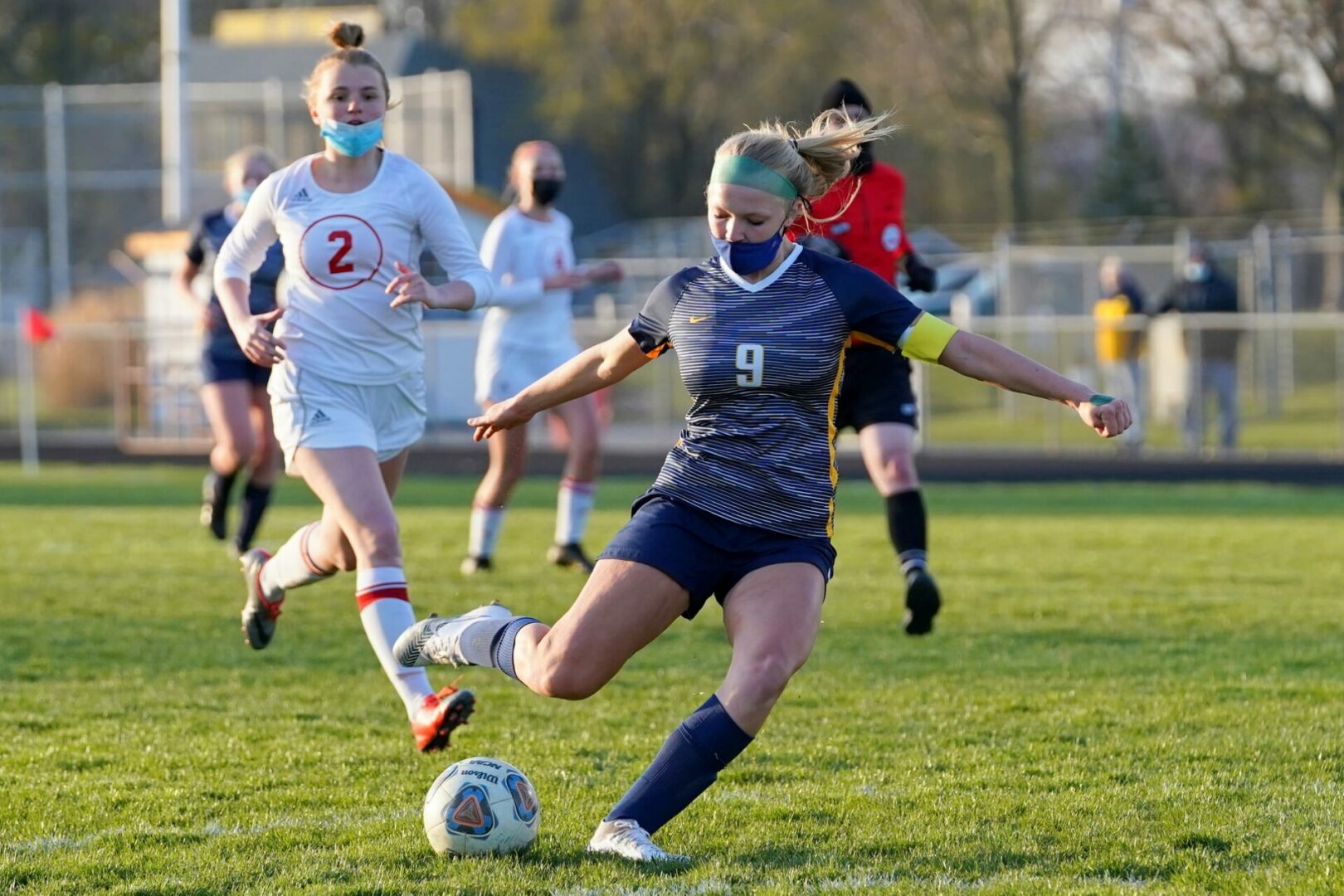 Hope Johnson gets ready to rip a shot for North Muskegon. Photo/Leo Valdez

As a freshman she broke her wrist and missed some preseason practice, and as a sophomore she broke her ankle in the first game of the season and was out of the lineup for about a month.

She was healthy and ready to go last spring, but of course the games were never played.

So Johnson is on a mission this season, and it’s obvious from her performance. She has racked up 11 goals and five assists in seven games, helping North Muskegon off to a sparking 6-1 start, with a 4-0 record in the West Michigan Conference.

A highlight moment came last week, when she scored three goals to lead the Norse to an impressive 8-0 win over conference rival Whitehall.

Her statistics are pretty amazing for a girl who has been playing soccer since a very young age, but needed some time to warm up for the sport. 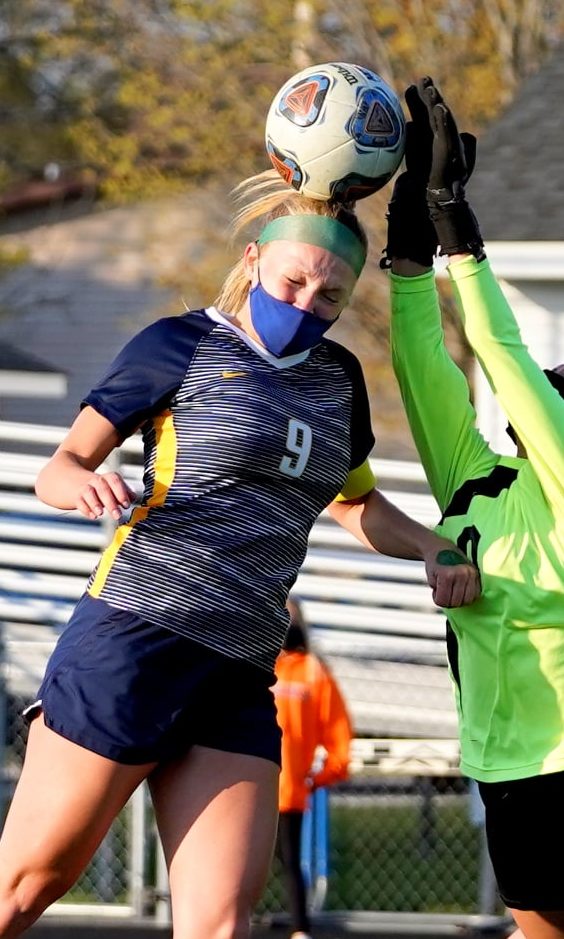 Johnson goes for a head shot during the Norse win over Whitehall. Photo/Leo Valdez

“I’ve been playing since I was about four,” Johnson said. “The first game I ever played, I got pushed down and I was crying. I had to be bribed to play with a stuffed animal every game that season. That was the only thing that kept me playing, and I think my family got me one (stuffed animal) till I was like six.”

First-year North Muskegon Coach Caleb Parnin is grateful for the stuffed animal strategy that kept Johnson on the field, because she’s the driving force of his offense this season.

“Her intelligence shows on the field,” Parnin said. “She’s constantly marked and scouted by the other teams. She knows when she has space but also does a great job of recognizing when teammates are open. She’s very happy to assist.”

While Johnson may lead the team, she’s got plenty of talent next to her, including fellow captains Audrey Wilson, Emily Olsen and Sophia Schotts.

Senior goalie Syann Fairfield and her talented freshman backup, Emma Lamiman, have worked with the defenders to keep opponents from scoring very much at all. The Norse opened with six straight shutout victories, and have only given up one goal so far this season.

“We’re really close,” said Johnson about the connection her team shares. “I love the group of girls that we have. I get to play with my cousin (Wilson) and we’ve been playing with Sophia since we were four. We’ve also played with Olsen and Syann Fairfield forever too. We’ve always been a super close group.”

That connection has Johnson and the seven other Norse seniors working on a pretty amazing accomplishment – playing four years of varsity without losing a West Michigan Conference game.

“It’s always been an important thing,” said Johnson about winning conference games. “Our Whitehall game was big the other day. They’re our rival every year and 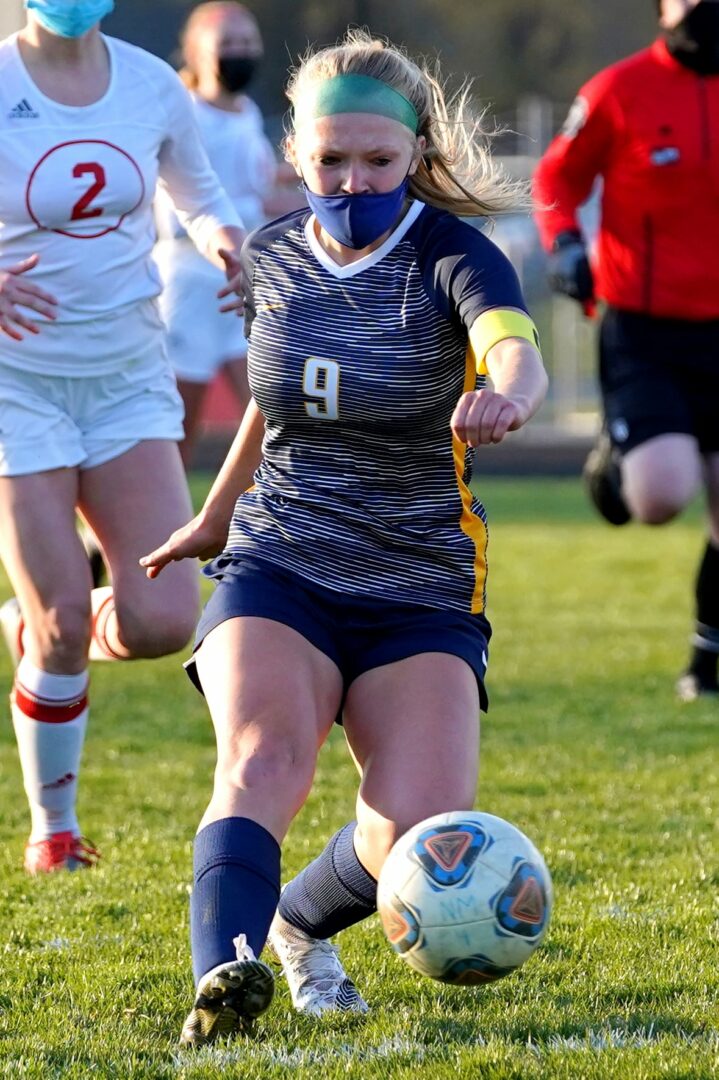 we were excited. We played so well and wanted to preach to the underclassmen that those games are so important, because we basically have two groups who had never played conference rivals.”

Johnson was referring to the 13 freshmen and sophomores on the team who were not around two years ago when the Norse last took the field. Amazingly, that new group has blended with the 11 leftover players from the 2019 team to form a great squad.

It’s been two long years since that last Final Four appearance, but the Norse continue to have the same goal – making another long run in the state tournament, and perhaps win that elusive state title this year.

“We have to make the most of every day,” Johnson said. “Something we say before every game is ‘The game we’re playing today is the most important yet.’ We have to get better every day if want to get back.”

“I really appreciate that they’ve bought into the growth mindset,” he said. “They’re looking at simply getting better every day. In terms of where we want to be, we got a lot of room for growth but we’re happy. We think if we play and practice with a growth mindset, we’ll get a lot better.”