MUSKEGON – The last time the Oakridge baseball team took the field prior to this season was in the state semifinals two years ago.

Although the Eagles haven’t played much since then, due to the cancellation of the 2020 season, they look like they haven’t skipped a beat.

Oakridge beat Whitehall 10-2 at home on Wednesday to complete the sweep of a West Michigan Conference doubleheader. They won the first game 11-1. 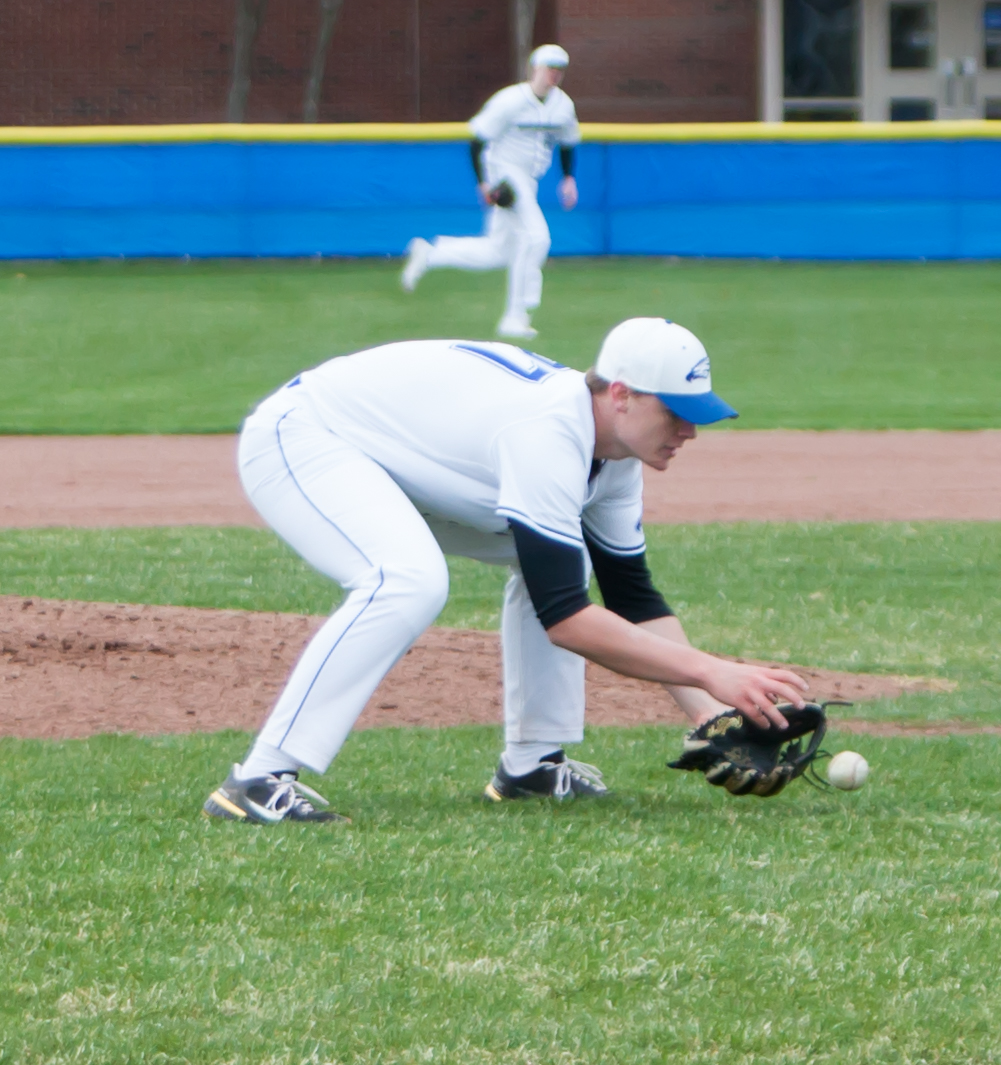 Oakridge, which pounded out nine hits in the second game, is now 3-0 on the season and 2-0 in conference play.

“I was really happy with the bottom of our order and the way that they hit,” said veteran Oakridge Coach Brandon Barry after the second game. “Everyone I thought contributed at one time or another in the game. That’s what will make us a good team, I think.”

The Eagles jumped out to a 1-0 lead in the first inning after Whitehall’s Ryne Christensen threw a wild pitch, allowing Corey Vanderputte, who got on base with a leadoff single, to cross the plate.

The second inning was productive for Oakridge, as well. After walks to Garrett Wever and Vanderputte, Ty Coletta drove in a run on a single to right field. Vanderputte scored when the next pitch was wild, and the Eagles led 3-0. 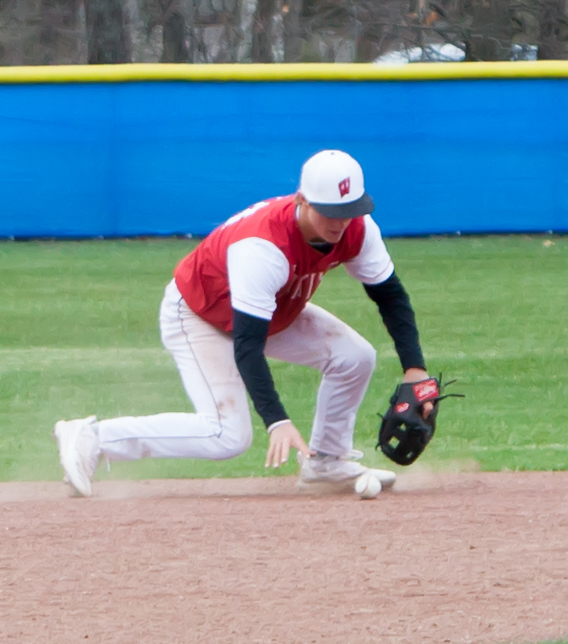 Whitehall got on the scoreboard in the bottom of the second when two runners reached on errors, then Kyle Stratton knocked in a run on a fielder’s choice groundout. 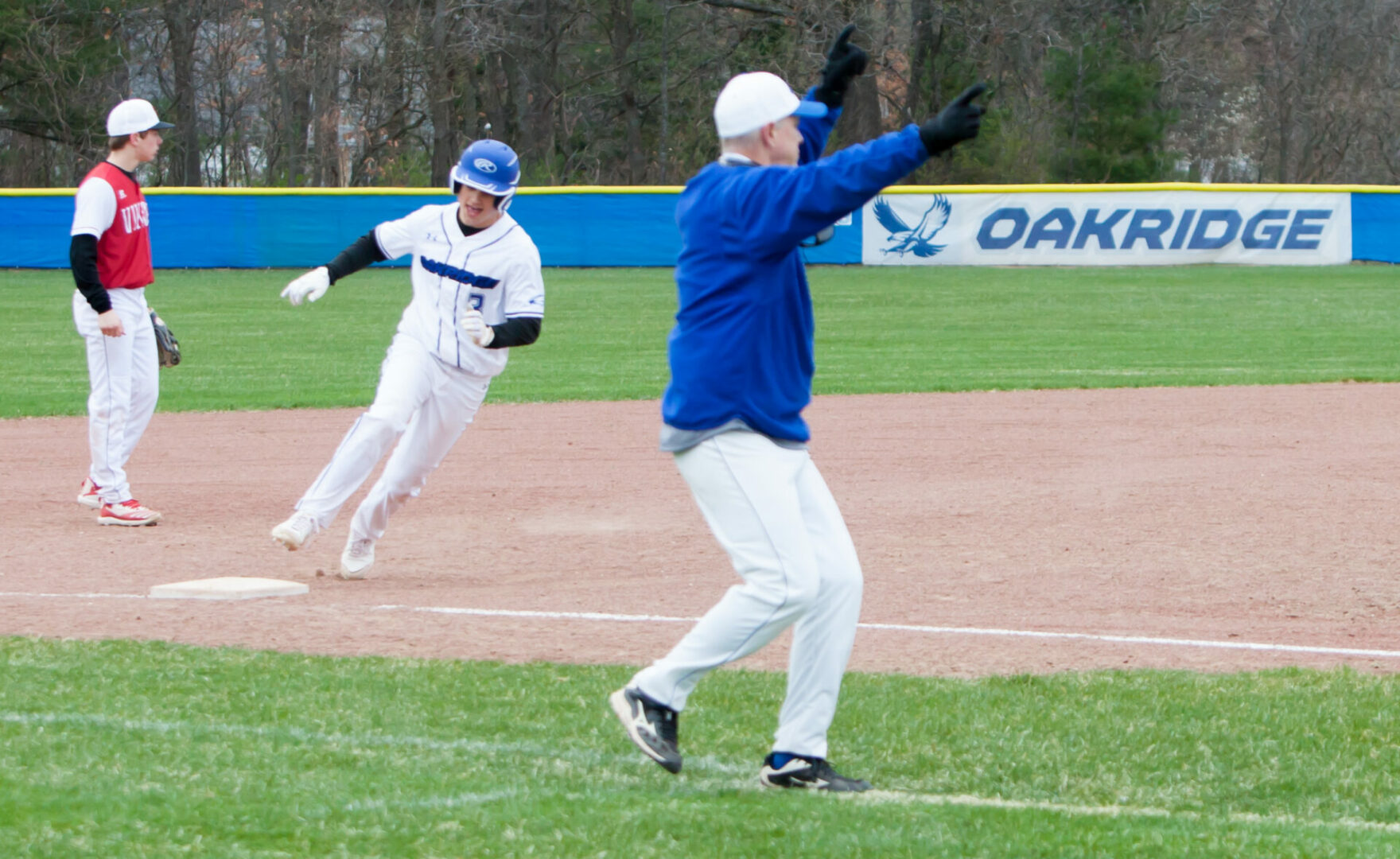 Oakridge scored four times in the fourth inning to take a 7-1 lead. Coletta drove in a run with a single, followed by a check swing single by Ethan Miller that led to two more.

The Vikings collected their second run in the fourth after an infield single by Christensen led to a throwing error that allowed a runner to score.

Oakridge finished off the scoring with three runs in the sixth. Plumhoff hit an RBI double and Asmus added an RBI sacrifice fly. After a single by Ethan Josza and a walk by Logan Fowler, the Eagles scored their final run on a fielder’s choice out.

Miller finished with three hits and two RBIs for Oakridge. Coletta had two hits and knocked in two runs.

Seth Plumhoff started on the mound for the Eagles and was relieved by Coletta in the second inning. Coletta pitched through the fourth inning, striking out three and walking three. Asmus pitched the final two innings, striking out four, including all three in the bottom of the sixth, which was the final inning.

Raymond and Christensen had the only hits in the second game for the Vikings, who are now 1-2 on the season and 0-2 in conference play.

The Vikings hurt their own cause by committing five errors in the game.

“I don’t think you ever prepare for taking a year off in a baseball program,” said Whitehall Coach Warren Zweigle. “We’re feeling the effects of that. I just think the lost year has cost us in that area. We feel fortunate to be able to get out here. We feel fortunate that we can improve our defense.” 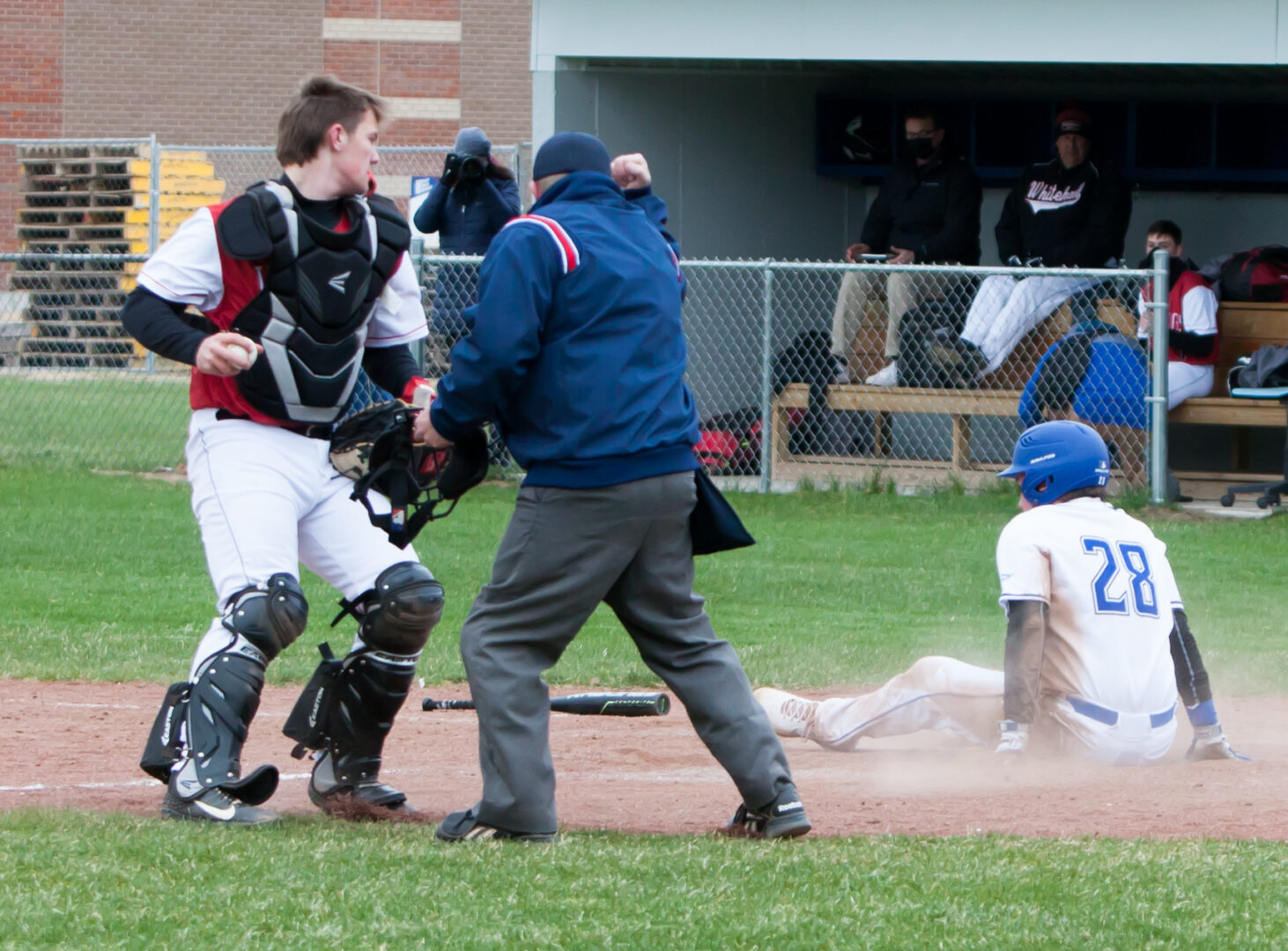 Whitehall catcher Aiden Raymond holds looks down at Ty Coletta after tagging him out at home plate. Photo/Jason Goorman 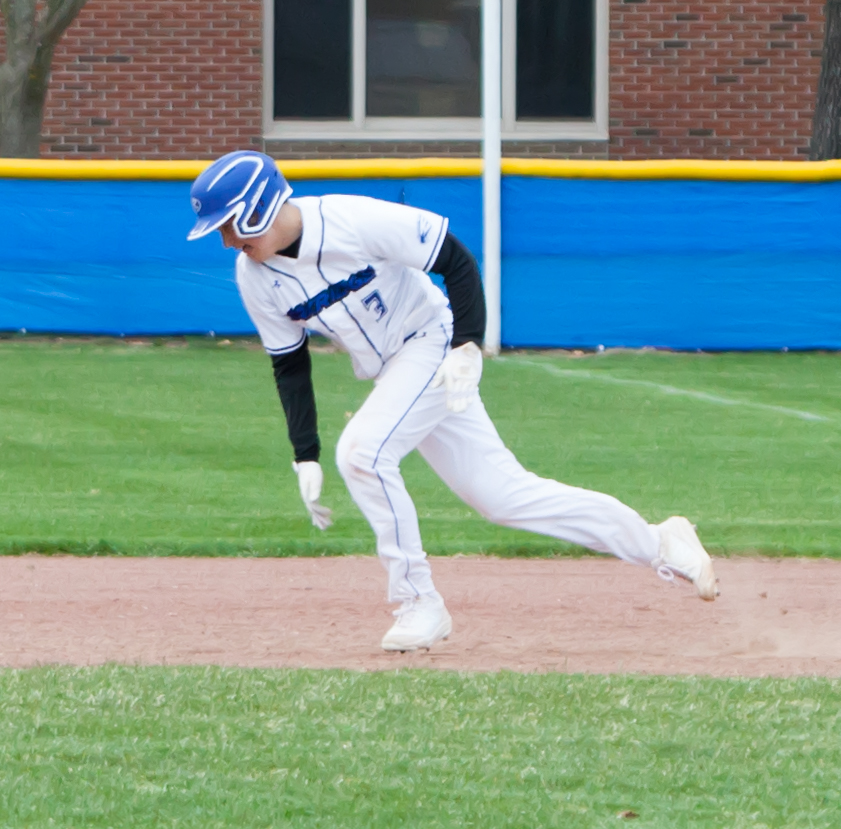 Whitehall shortstop Cayden Ritchie tosses the ball to Christian Smolen to get the force out at second base. Photo/Jason Goorman 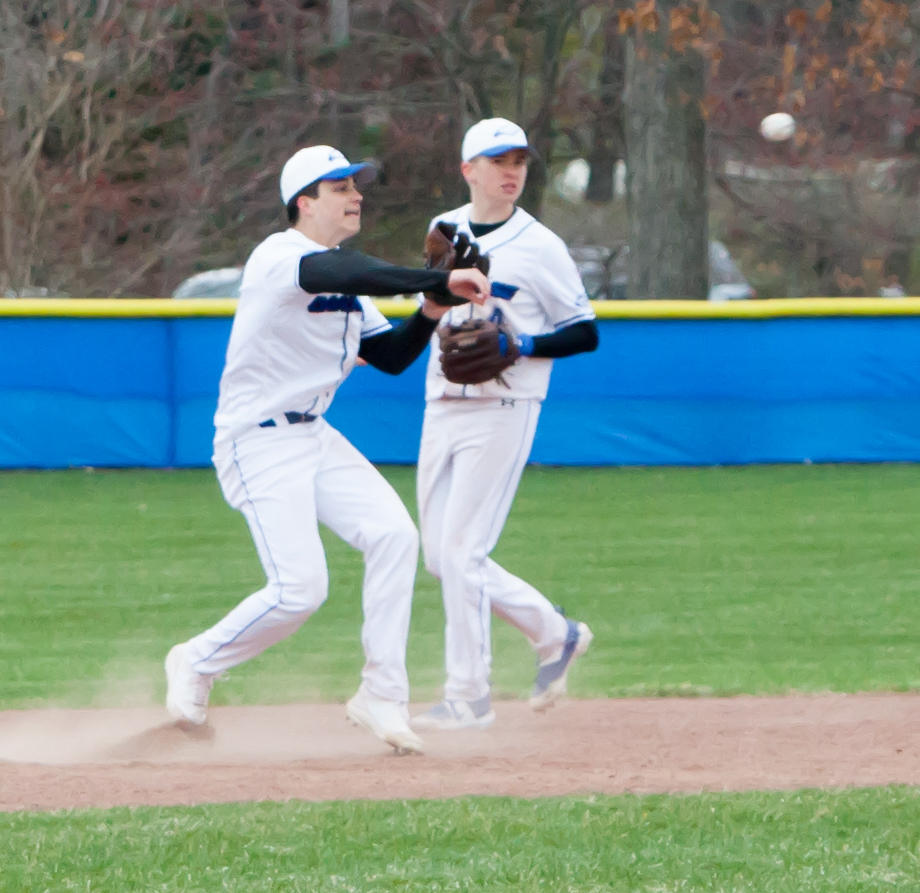 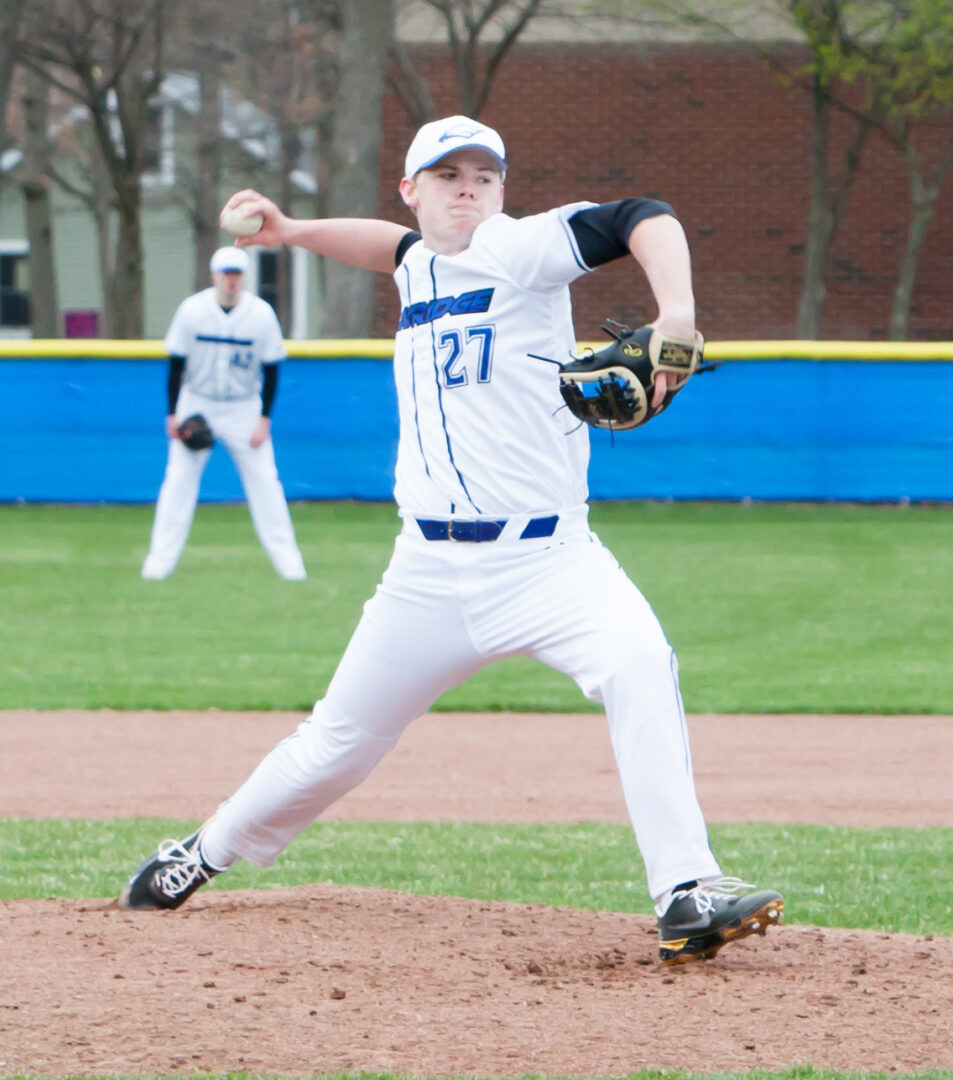 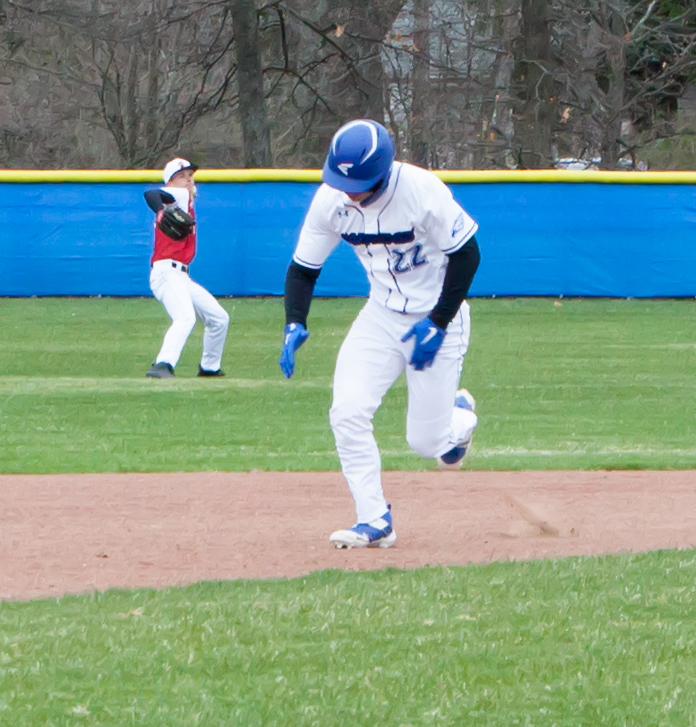 Corey Vanderputte runs to third as Whitehall center fielder Colin Zygumntowski tries to get the out. Photo/Jason Goorman 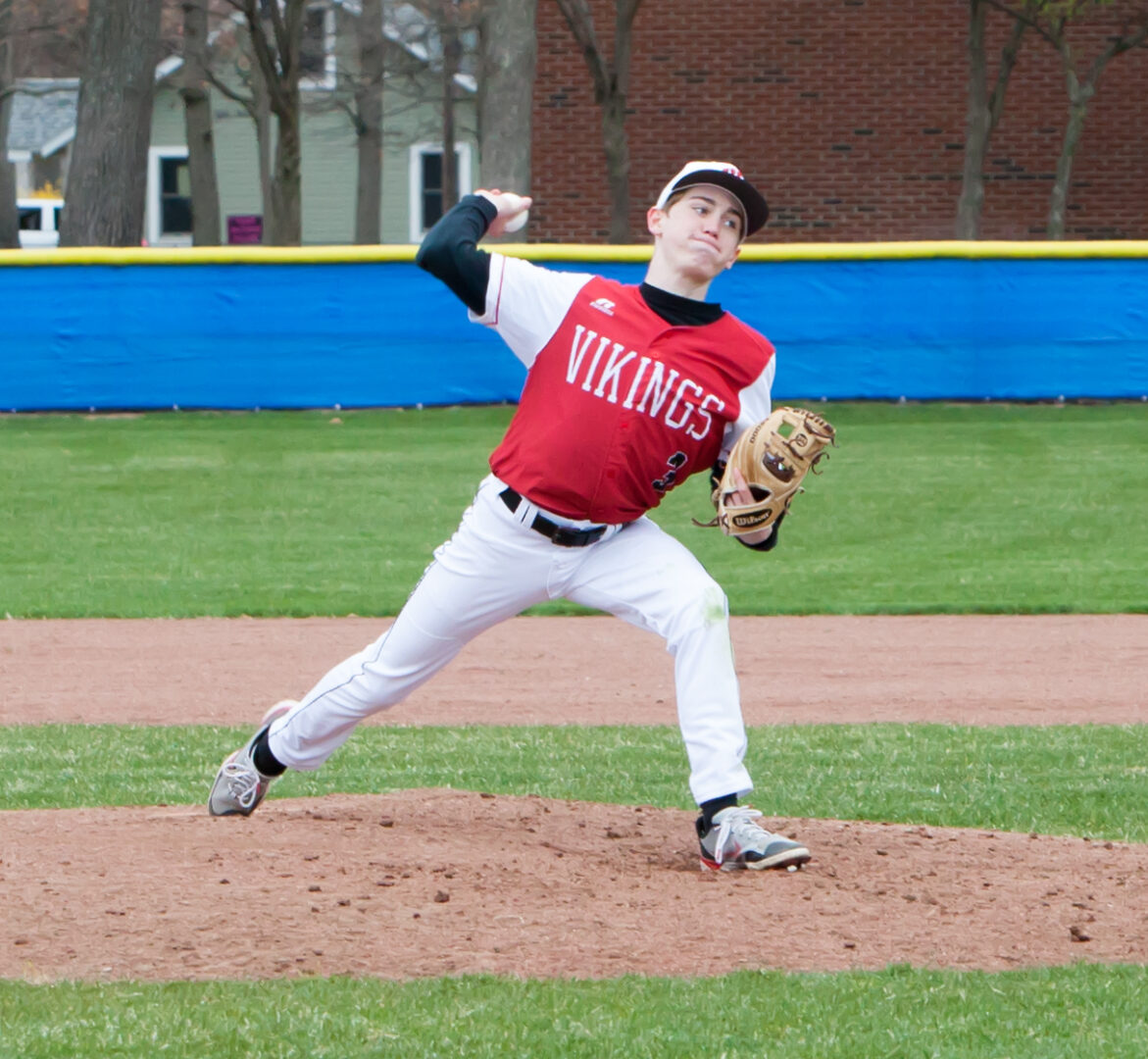 Oakridge’s Corey Vanderputte is congratulated by No. 42 Ethan Josza after scoring a run. Photo/Jason Goorman