MUSKEGON – That was way too easy. And that may not be a good thing.

Of course all fans like their teams to win, and the West Michigan Ironmen certainly did that on Friday, plastering the visiting Carolina Predators 66-0 at Mercy Health Arena.

It was the second straight blowout victory for the Ironmen, who opened the season last Saturday with a 57-0 slaughter of Chicago.

Their next game is May 15 at home against the St. Louis Bandits.

So two games in, there’s no doubt that the Ironmen are a really good team, and their opponents have not been very good at all.

But here’s the question – how do the Ironmen get any better without being pushed? With only two games left in the four-game regular season, is there any chance they will find an opponent in the American Arena League to give them a competitive game and polish them up for the playoffs? 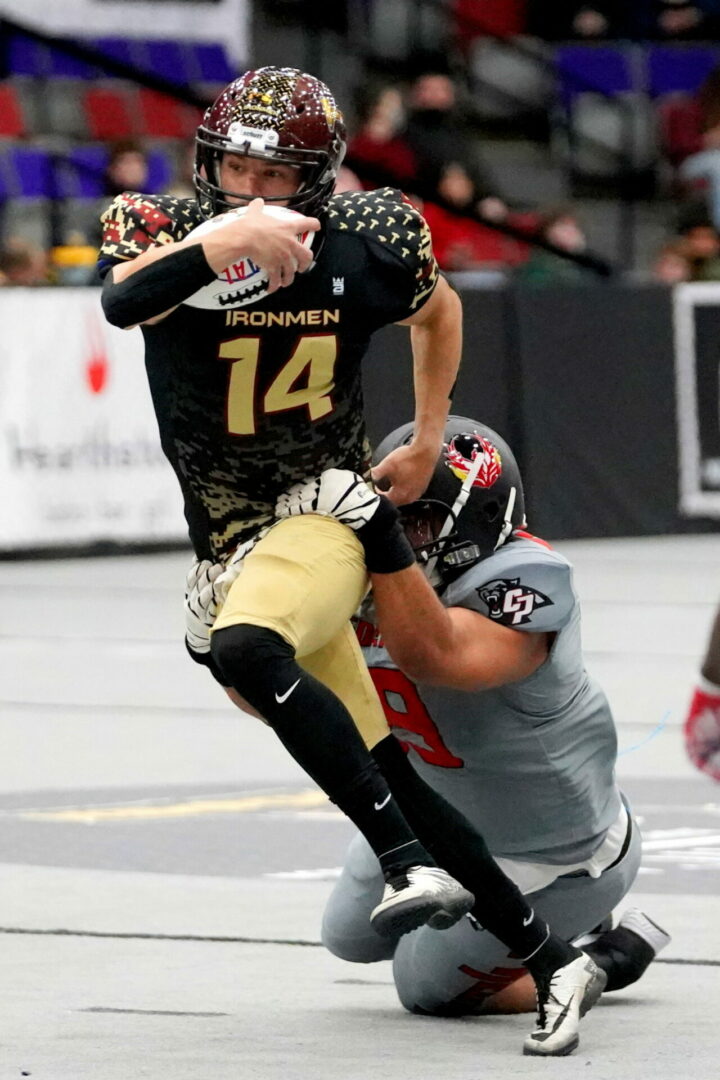 If not, will they be ready when (or if) they run into a good team in the playoffs?

“We hope someone will push us,” said Ironmen Coach Nate Smith. “St. Louis is supposed to be a quality team. Carolina ran into some issues and had to leave 3 or 4 players in Chicago who got sick. They flew into Chicago and drove here.

“At halftime we talked about playing to our potential, and that was the focus, no matter what. I told them to stay focused and play up to their potential, and let’s get out of here healthy.”

The game was as one-sided as the final score suggested. The only negative for West Michigan was three missed extra points after touchdowns.

The second half was more of the same, with a merciful running clock. The Ironmen again scored on all of their possessions, with a four-yard TD throw from Carder to Marcus Smith, a seven-yard scoring run by Dakota Smith, a 36-yard TD run by backup quarterback Tyler Fehler, and a 20-yard TD pass from Fehler to Patrick Lafere on the last play of the game.

The home team also got a 10-yard pick-six from Jamal Abby.

Carder fcompleted 6 of 8 passes for 101 yards and four touchdowns. Craig had three receptions, including two TDs, for 62 yards. Both Mike Wynn and Lefere each had one catch for 20 yards. Dakota Smith had four carries for 19 yards and two touchdowns. 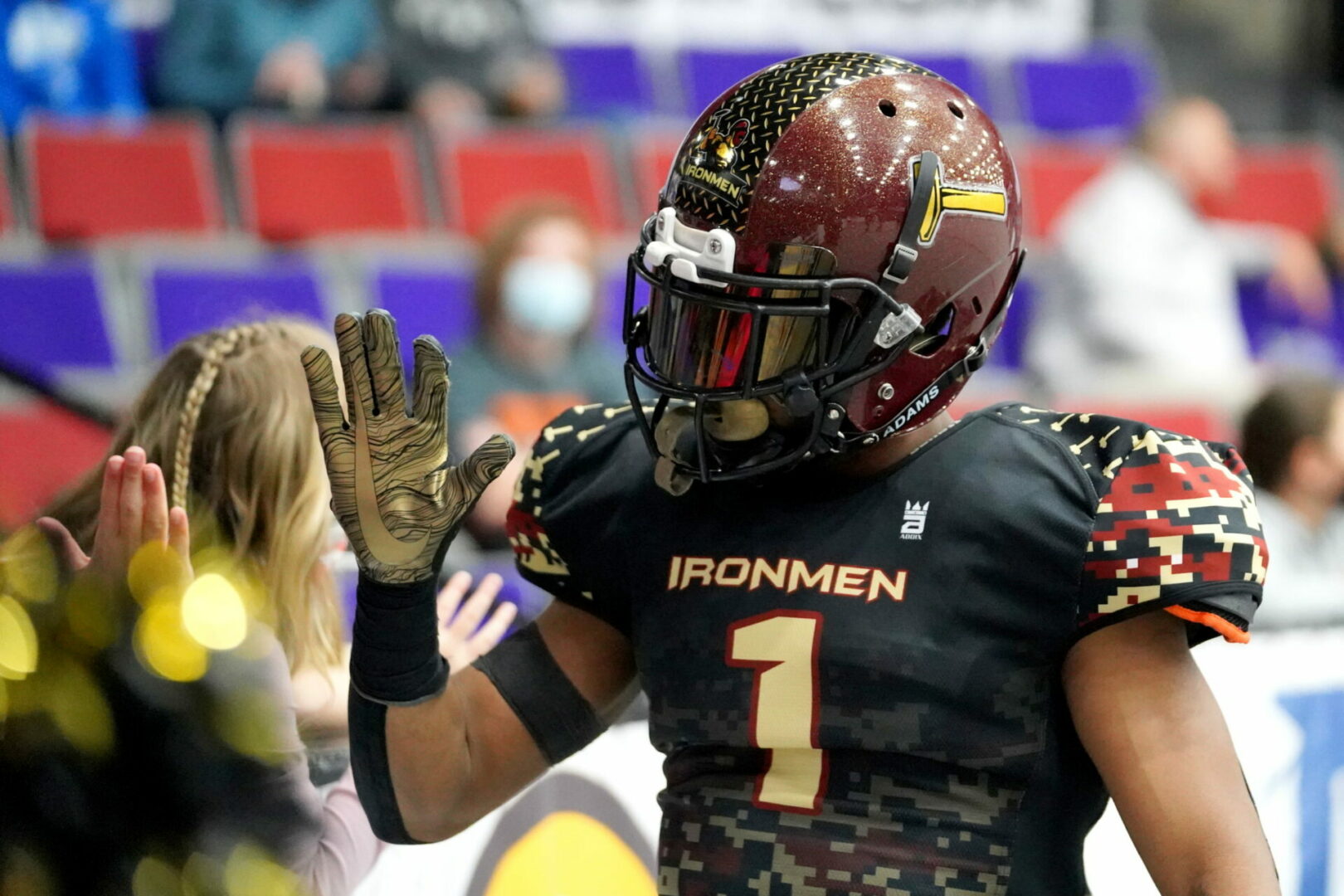 The West Michigan defense held Carolina to almost complete immobility. Carolina had the ball nine times, turned it over on downs seven times, and had two fumbles. 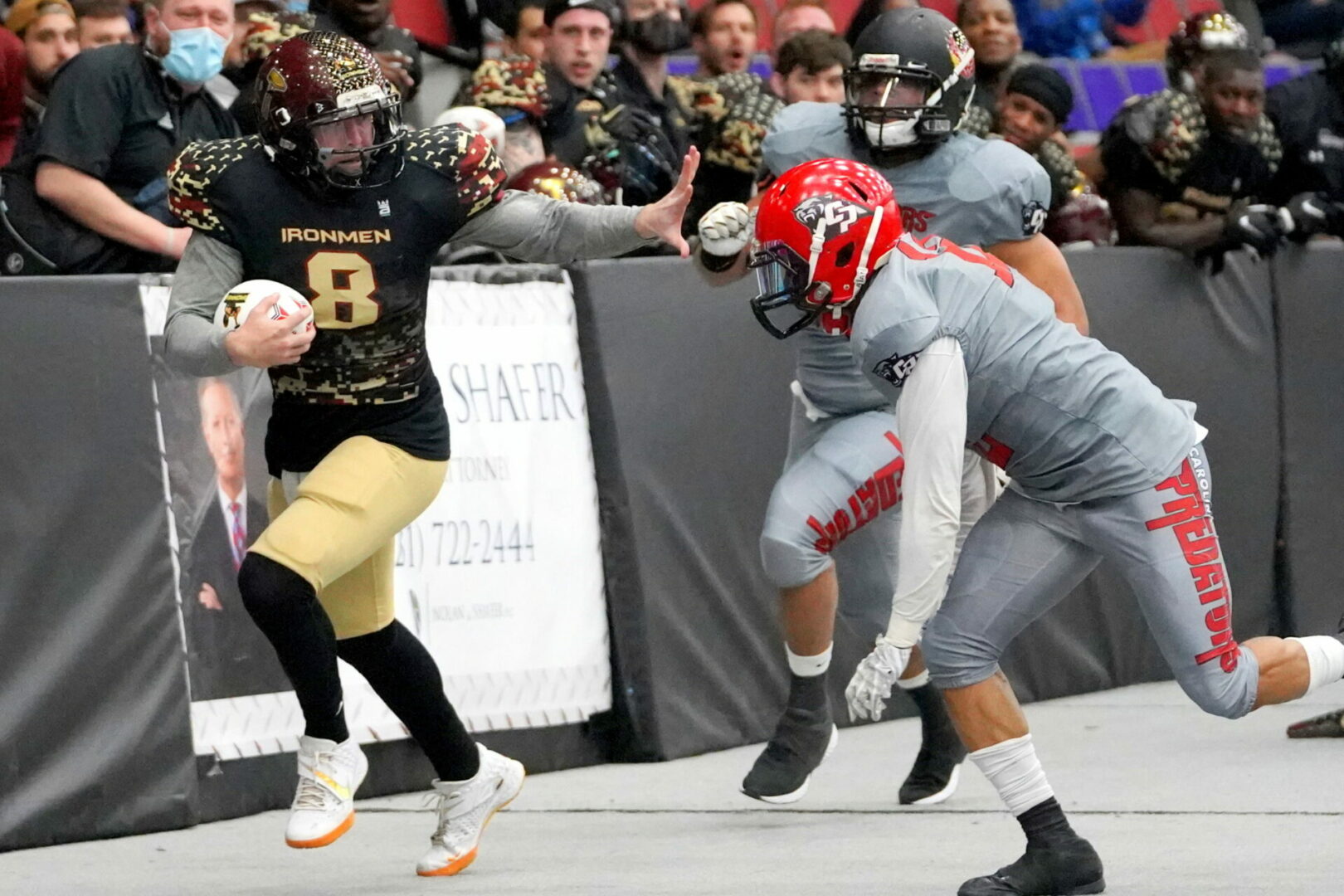 Overall the Ironmen registered six sacks in the game. 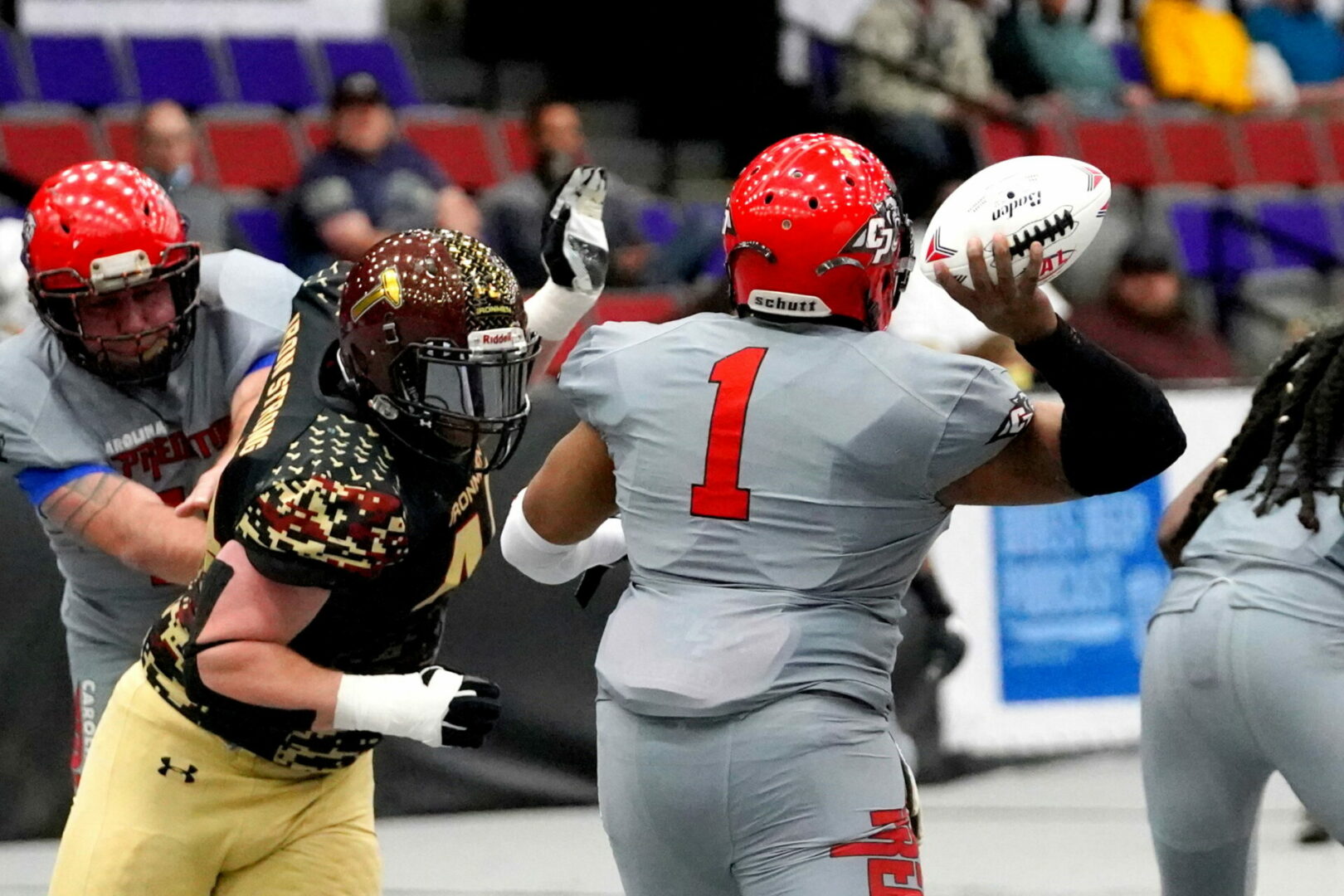 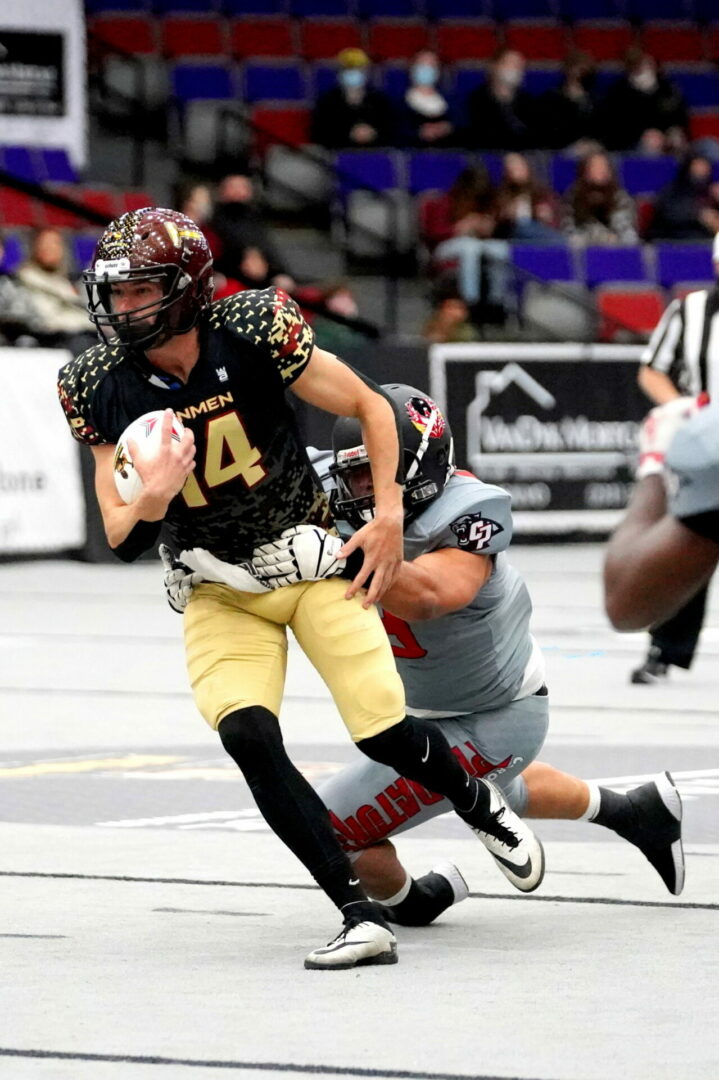 Alex Carder rushes the ball for the Ironmen. Photo/Leo Valdez

No. 3 Keyondre Craig is congratulated by Mike Wynn after scoring for West Michigan. Photo/Leo Valdez 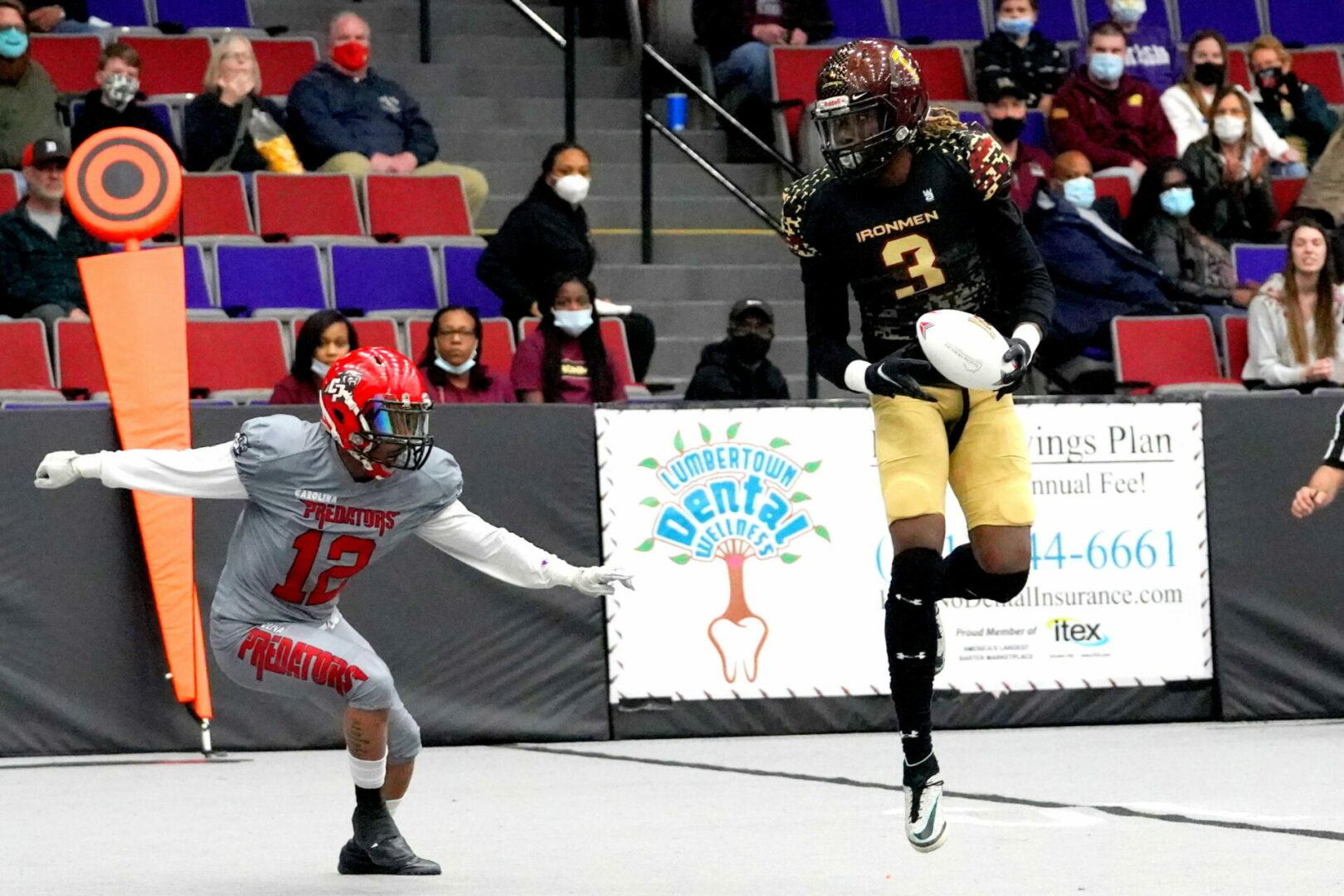 Keyondre Craig comes down after making a catch for the Ironmen. Photo/Leo Valdez 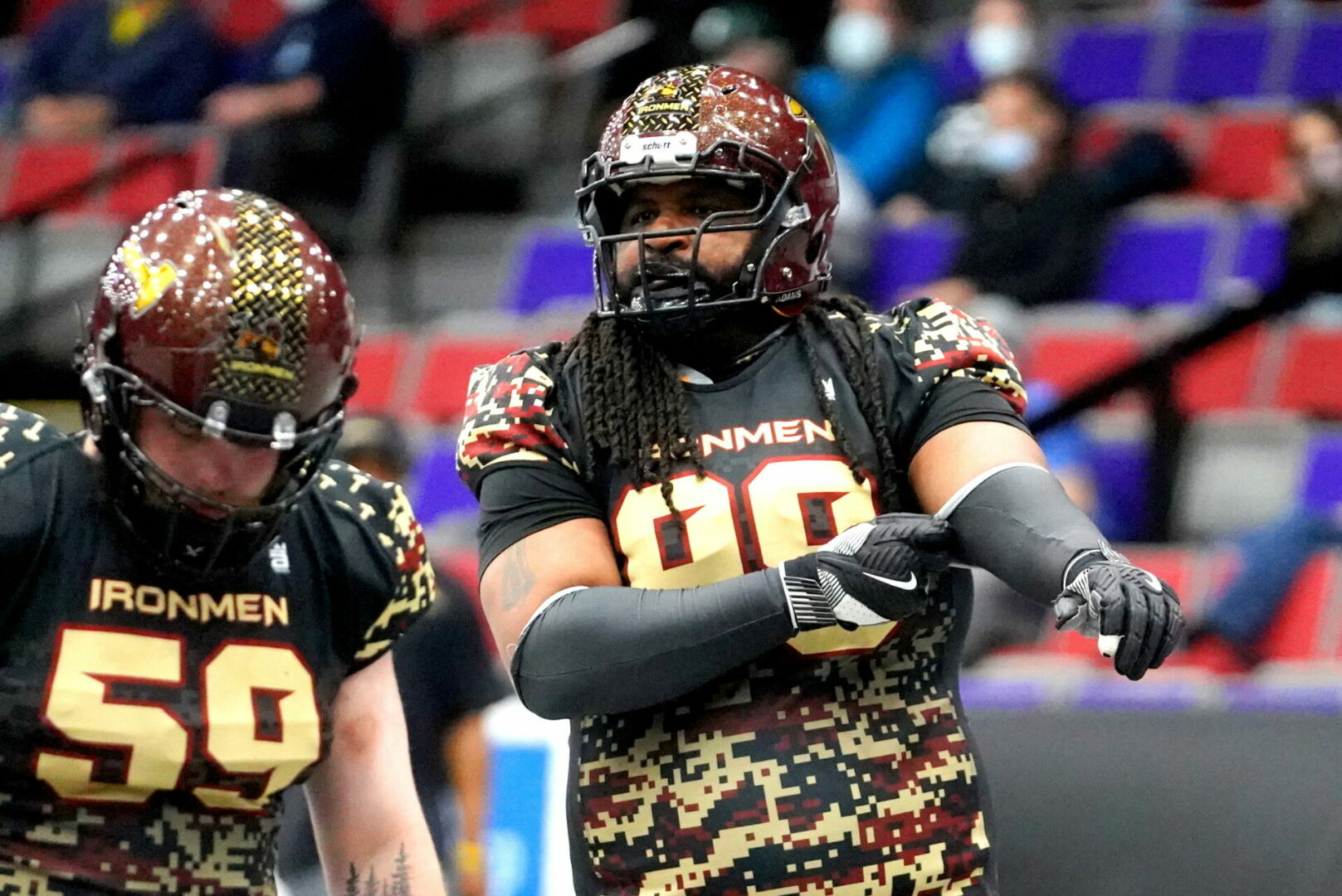 No. 99 Dyron White gets ready between plays. Photo/Leo Valdez 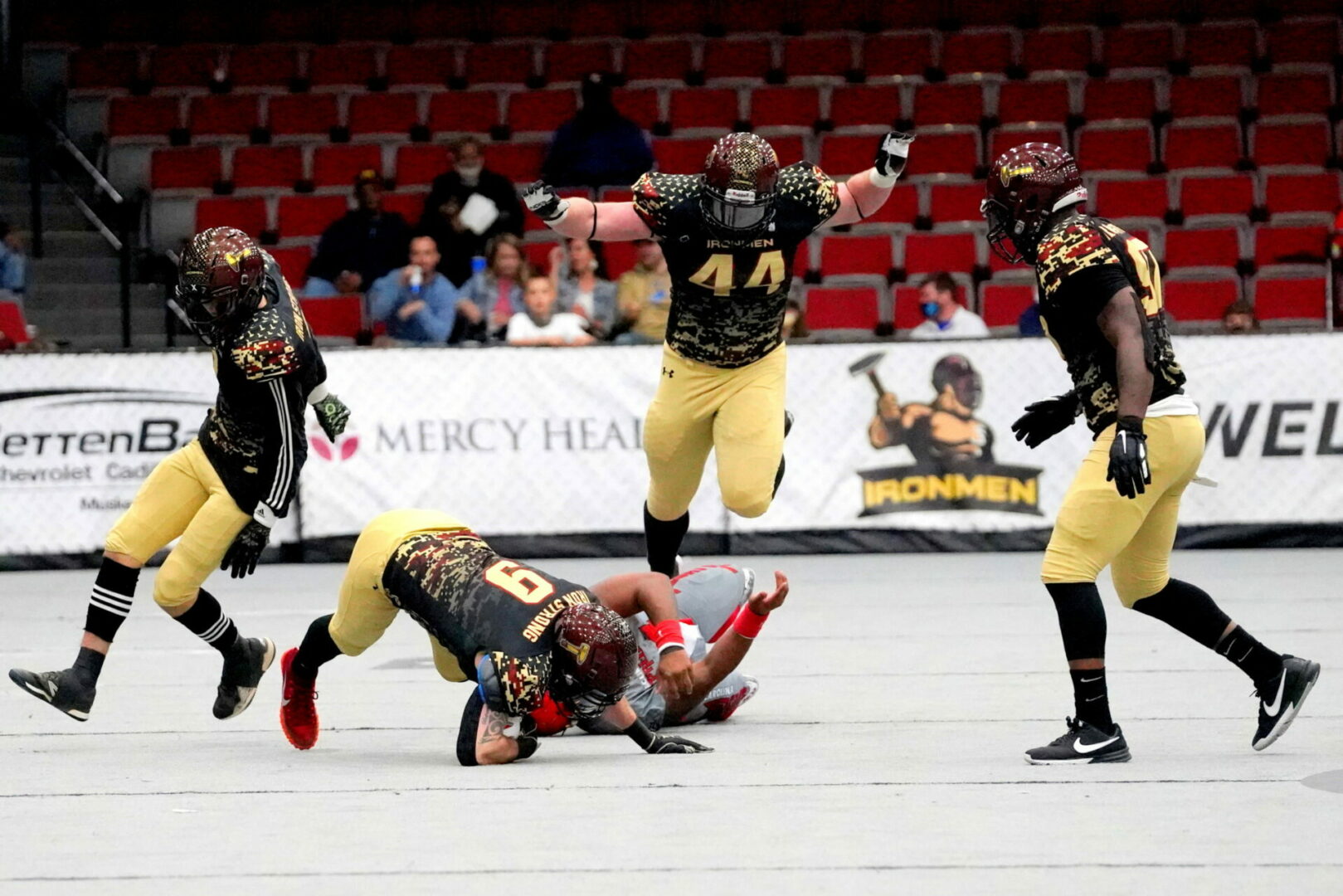 Nick Dekraker jumps over the QB as No. 9 Buck Holtron fall to the ground for West Michigan. Photo/Leo Valdez