with a shot that bounced off his butt.

His left cheek, to be exact. 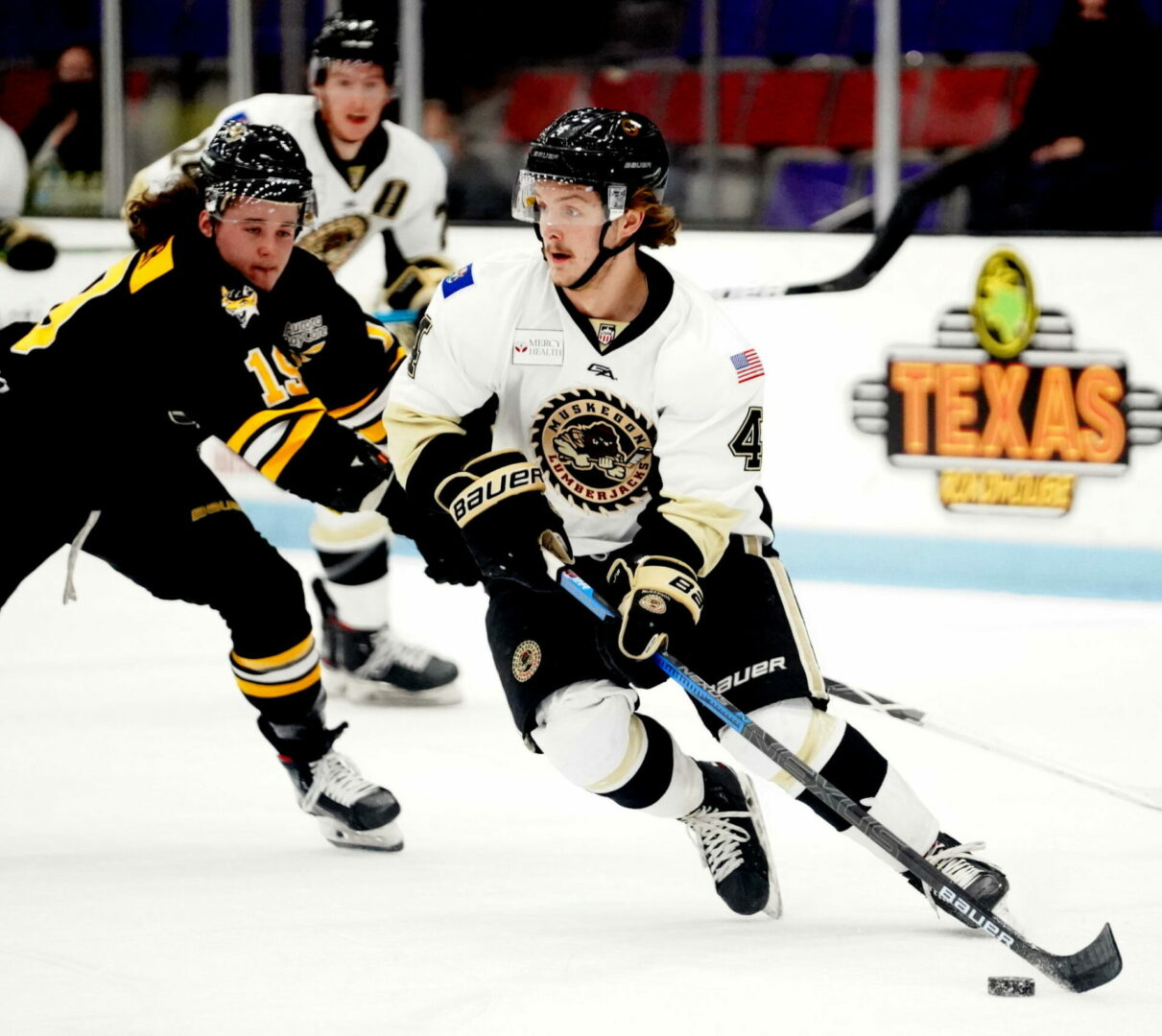 The Lumberjacks were in a tight, desperate battle with the Green Bay Gamblers on Friday night in Game 1 of their USHL Eastern Conference semifinal series.

The score was knotted 2-2 in the final minute, and it looked like the game was headed to overtime, when a faceoff came in the Green Bay zone.

Lumberjack defenseman Hank Kempf got the puck after the faceoff and launched a shot from the point. The puck hit Marek in his behind and bounced into the goal with 38 seconds left, giving the Jacks a thrilling 3-2 victory at Mercy Health Arena and a 1-0 lead in the short series. 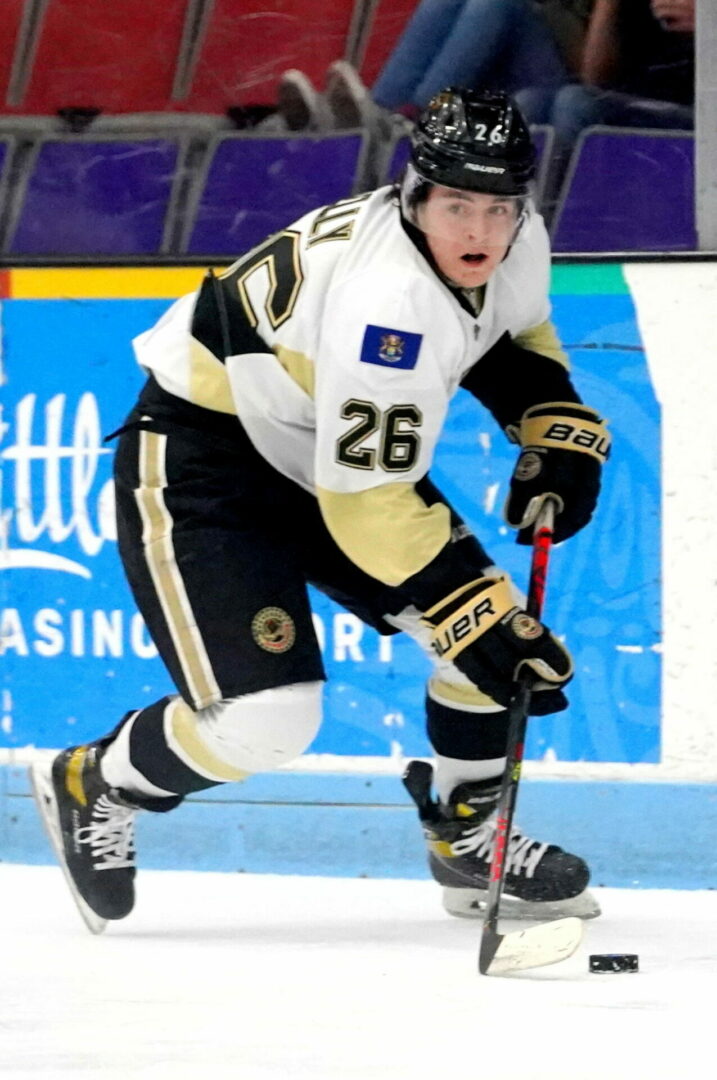 Tanner Kelly skates with the puck along the boards. Photo/Leo Valdez

Muskegon can wrap up the best two-of-three series with a victory on Saturday night at home against the Gamblers. Puck drop is 7:10 p.m. Game 3, if necessary, would be in Muskegon on Sunday at 5 p.m.

“The puck was out to the point and I put myself in front of it,” Marek said. “I tried to tip it off my stick, but it just hit my butt. I may need to get a massage. They don’t ask how (you score), right? I don’t really care.

“It was my first appearance in the playoffs. That was a nice touch to be able to slide that one home.”

Lumberjacks Coach Mike Hamilton also got a laugh about how the crucial goal went into the net.

“It went right off Marek’s big butt,” the coach said. “I told him that it finally came in handy there. And then he celebrated a little more than he needed to and got himself a 10-minutes misconduct. But it was a gritty goal, and I told them that was the kind of goal it was going to take to win it.”

The series was expected to be a clash of styles, with the high-flying Lumberjacks, who score a lot of goals, facing the hard-hitting Gamblers, who play tough, physical defense – and that’s exactly how Game 1 unfolded.

The Jacks came out firing on all cylinders in the first period, outshooting the Gamblers 18-10  and taking a quick 2-0 lead.

Cristhophe Tellier got the first goal just 1:54 into the game when he banked a short shot off a Green Bay player, and it went into the Gamblers’ net. Cameron Berg added a goal at the 8:29 mark, when he took a pass in front of the net and snapped it home.

The Gambler’s physical play and tight defense slowed the Lumberjacks’ attack in the second period, when they only managed five shots on goal, failed to take advantage of two power plays, and were left scoreless. Green Bay got a power-play goal at the 12:34 mark from Jesse Tucker, and the score was tied 2-2 headed into the third. 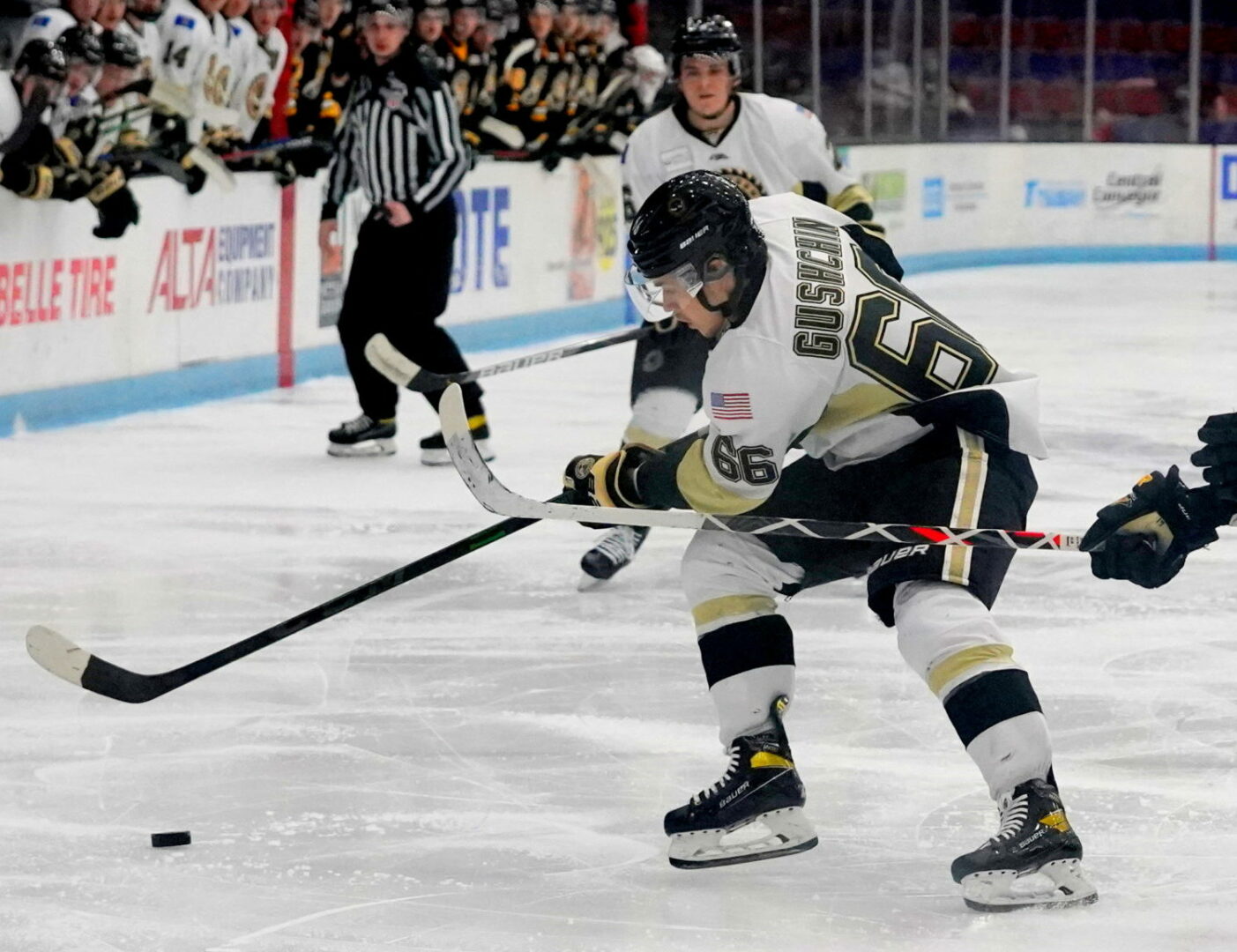 Muskegon’s Danil Gushchin fights off a poke check from behind. Photo/Leo Valdez

“In the second period they kept us to the outside and we didn’t play in the middle at all,” Hamilton said. “That was forcing us to dump some pucks. In the first period we had 17 scoring chances and in the second we had four. They did a good job of slowing it down.

“I thought we got back to our game in the third period, and we had numerous chances to get it done. I am proud of the guys for sticking with it. It was an exciting one.”

Green Bay had the offensive edge in the third period, outshooting the Jacks 9-8. Muskegon goalie Jan Skorpik came up big in the period, turning away several tough Gamblers shots and keeping the Jacks in the game.

“He kept it simple and his rebound control got better as the game went on,” Hamilton said about his goalie’s performance.  “It was a huge win, and it was fun to see some playoff hockey on tough ice.”

Everyone was thinking overtime, and getting ready for more drama, when Kempf’s shot hit Marek’s butt and bounced past Green Bay goalie Matt Davis, sending the crowd into a frenzy.

Muskegon had an overall 31-23 advantage in shorts on goal. Skorpik stopped 21 of 23 Green Bay attempts to earn the win. Davis stopped 28 of 31 shots for Green Bay.

Marek, Kempf and Tanner Kelly had assists for Muskegon.

“First games are important, and now we have the advantage,” Marek said. “We got to push hard again tomorrow.”

Goorman’s Gridiron Picks: Football on Thursday and Friday, two weeks in a row, and there are great games this weekend