MUSKEGON – The West Michigan Ironmen have finally been tested, and demonstrated that they can dominate a decent team that’s capable of putting points on the

The Pennsylvania Union came to town on Saturday to meet the Ironmen, and hopes were high that they would put up a fight, after the local team’s first two opponents this season combined to score zero points.

The visitors obliged for a while, taking an early 14-7 lead following a pick-six in the first quarter, and pulling within nine points early in the third.

But the quick-strike Ironmen offense pulled its act together, the defense came up with a few big plays, and West Michigan rolled to a 55-26 victory in an American Arena Football League game at Mercy Health Arena. 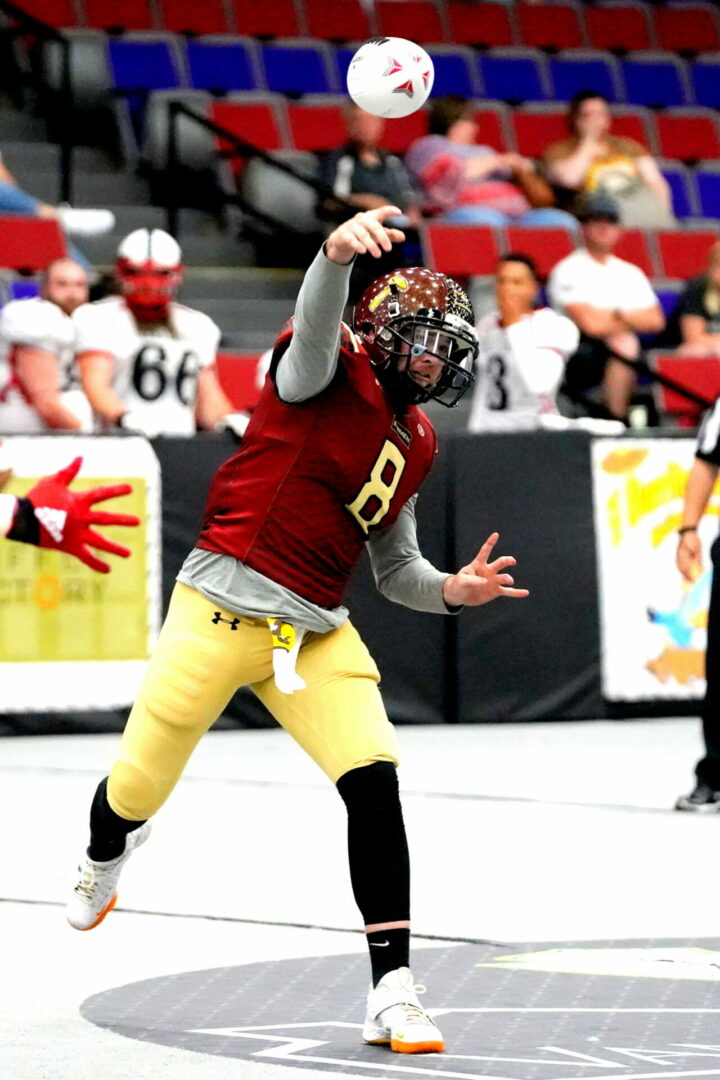 Leading the scoring for the Ironmen were Dakota Smith and John Ross with two touchdown catches apiece. Defensive lineman Nick DeKraker put eight points on the board with a fumble recovery for a touchdown and a tackle in the end zone for a safety.

Quarterback Alex Carder had another good game, completing 11 of 17 passes for 130 yards and five touchdowns.

“It felt good,” DeKraker said about the game. “It felt like we were playing in a real game this time. For being off a month and being able to stay focused, scoring 55 and only allowing 26 was still pretty good.”

The Ironmen, now 3-0 in the short season, will host the AAFL’s Midwest Division championship game on June 5 against a yet-to-be determined opponent. That will be the final game of the season, because the AAL is not having playoffs this year.

The game did not start out well for the Ironmen, who hadn’t played a game in a month and looked rusty in the first quarter. 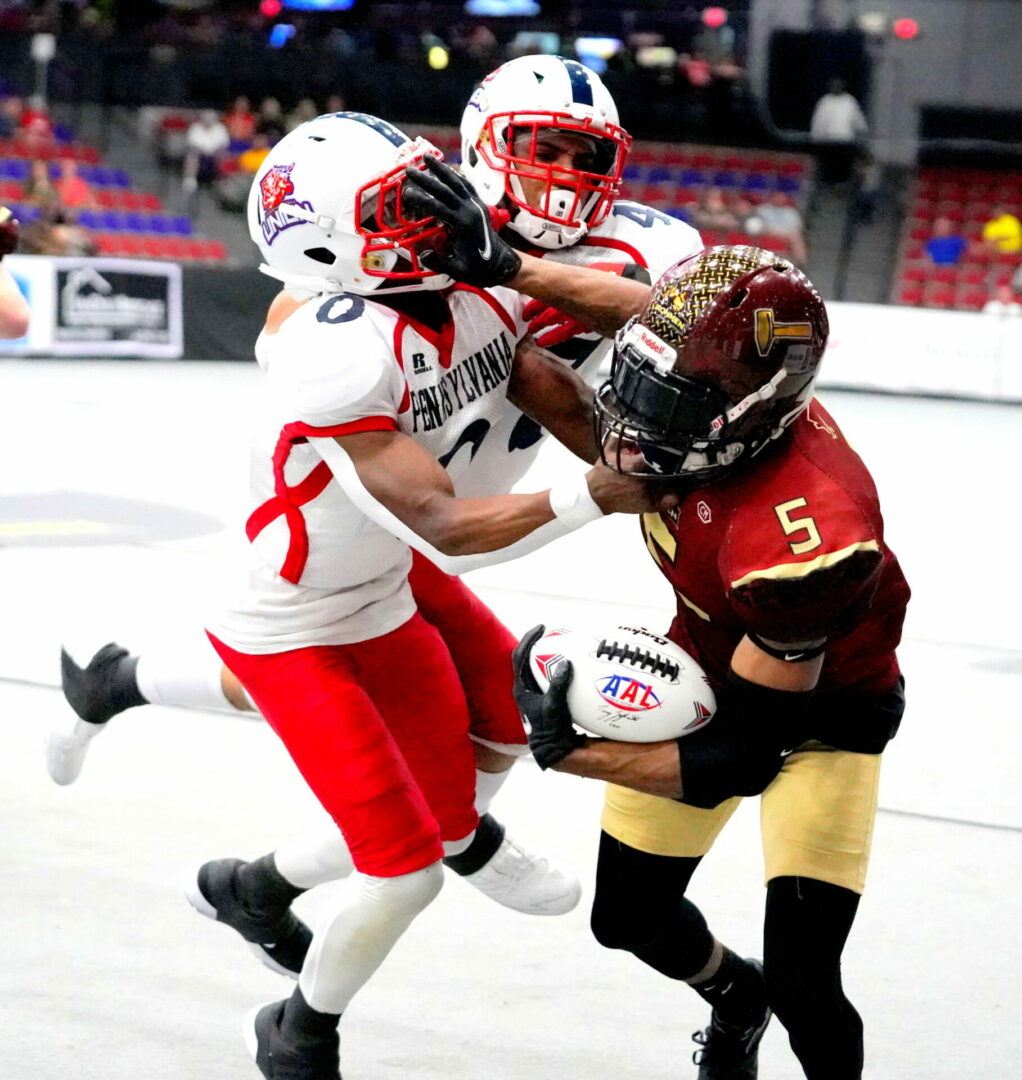 No. 5 John Ross puts up a stiff arm as he fights for more yards for the Ironmen. Photo/Leo Valdez

Carder gave the Ironmen a quick 7-0 lead when he threw a seven-yard touchdown pass to Dakota Smith 3:35 into the game, then kicked the extra point.

But Pennsylvania struck back quickly with a touchdown pass of its own at 11:45 of the first quarter. Those were the first points that the Ironmen had given up this season, spanning nearly five quarters, or one hour and 31 minutes of football.

On West Michigan’s next possession, Pennsylvania’s Arthur Howell picked off Carder at the Ironmen 9 and scored. The conversion attempt failed, but Pennsylvania led 14-7 after one quarter.

The Ironmen responded in the second quarter, getting a six-yard TD pass from Carder to Marcus Smith and a 10-yard scoring strike from Carder to John Ross, giving West Michigan 21-14 lead.

“Once we made some adjustments I thought we did well,” said Ironmen Coach Nate Smith. “We just had to calm down, play our game and not get too anxious. Overall we played well enough. We gave up a few easy points.”

Pennsylvania had a bad snap that got past the quarterback midway through the second quarter, and DeKraker chased down the bouncing ball and jumped on it in the end zone, giving the Ironmen a defensive touchdown and a 29-14 halftime lead. 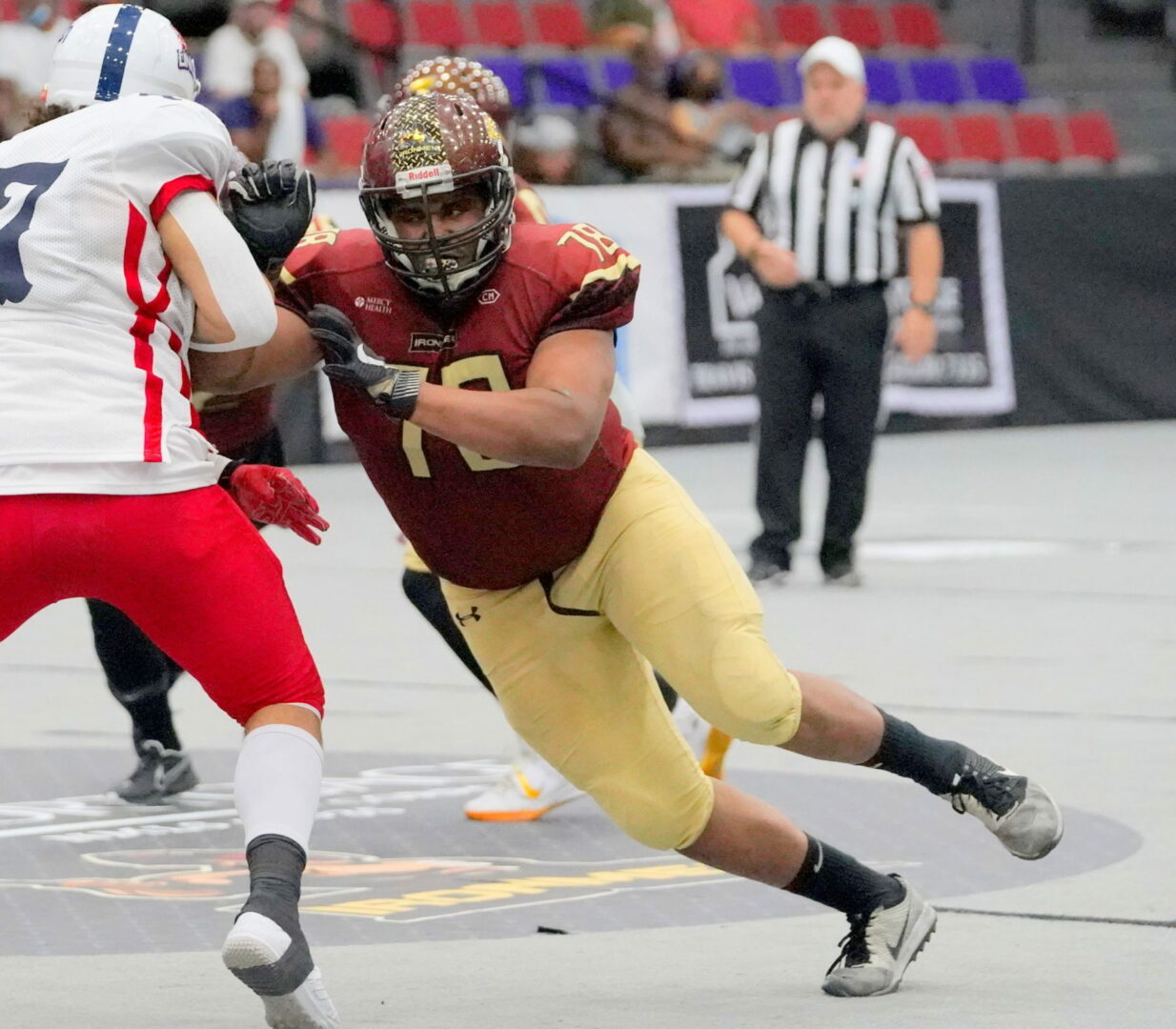 “It was just a matter of being in the right place at the right time,” DeKraker said about his touchdown.

The Union opened the third quarter with a 32-yard touchdown pass from quarterback Mikale Clark to James Jackson, and trailed 29-20.

West Michigan fired back with a 28-yard TD pass from Carder to Mike Wynn, a safety that was scored when DeKraker tackled the QB in the end zone, and a six-yard touchdown run by Smith, making the score 43-20 at 12:18 of the third quarter.

Pennsylvania scored another touchdown late in the quarter and the Ironmen led 43-27 headed into the fourth.

West Michigan pulled away in the fourth quarter with a 20-yard scoring pass from Carder to Ross and a 12-yard TD pass from backup quarterback Tyler Fehler to Patrick Lefere. 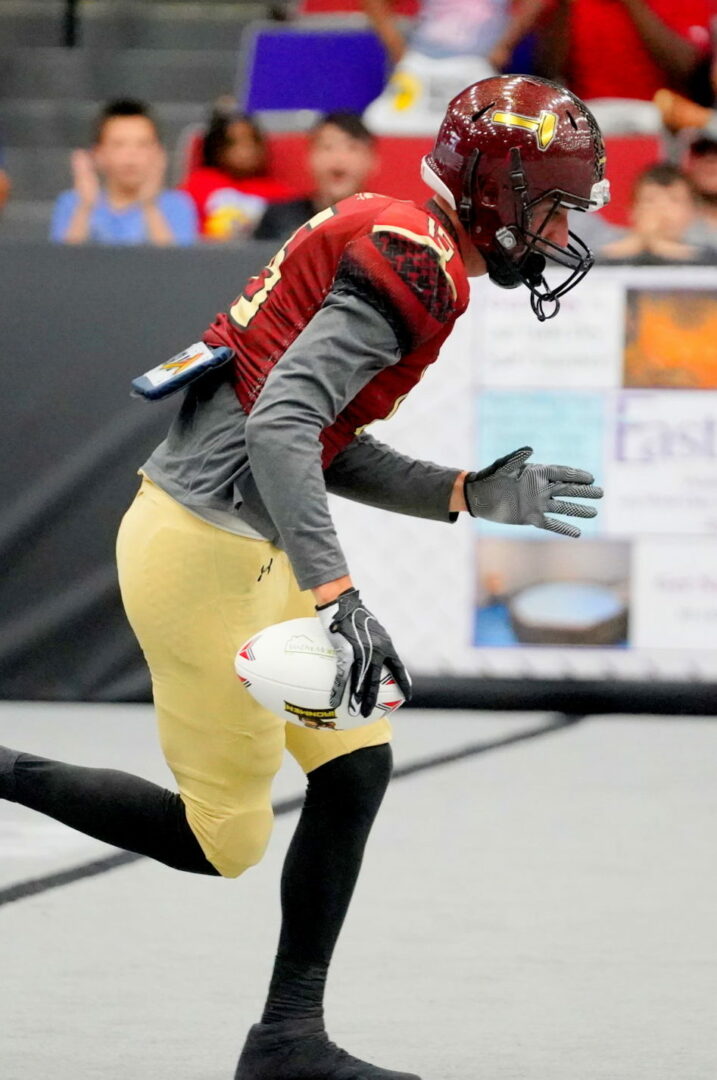 Smith finished with 37 yards on four carries and caught three passes for 31 yards. Lafere led the receivers with five catches for 48 yards while Ross had three for 38 yards.