MUSKEGON – After a long, exciting season of chasing the talented Chicago Steel, the Muskegon Lumberjacks came as close as close can be, but fell just short in the end.

The Jacks were playing to keep their season alive on Saturday in Game 2 of the Eastern Conference championship series against the Steel. Victory was necessary, because Chicago won Game 1 in overtime on Friday, and only needed one more win to wrap up the short best 2-of-3 series.

Muskegon gave it a valiant effort, battling back from two different deficits and taking two short leads, but in the end it came down to the third period, when Chicago scored the only goal.

Adam Fantilli put a backhand shot past Lumberjacks goalie Jan Skorpik at the 8:34 mark of the third, and the Steel skated away with a 5-4 victory at Muskegon’s Mercy Health Arena. 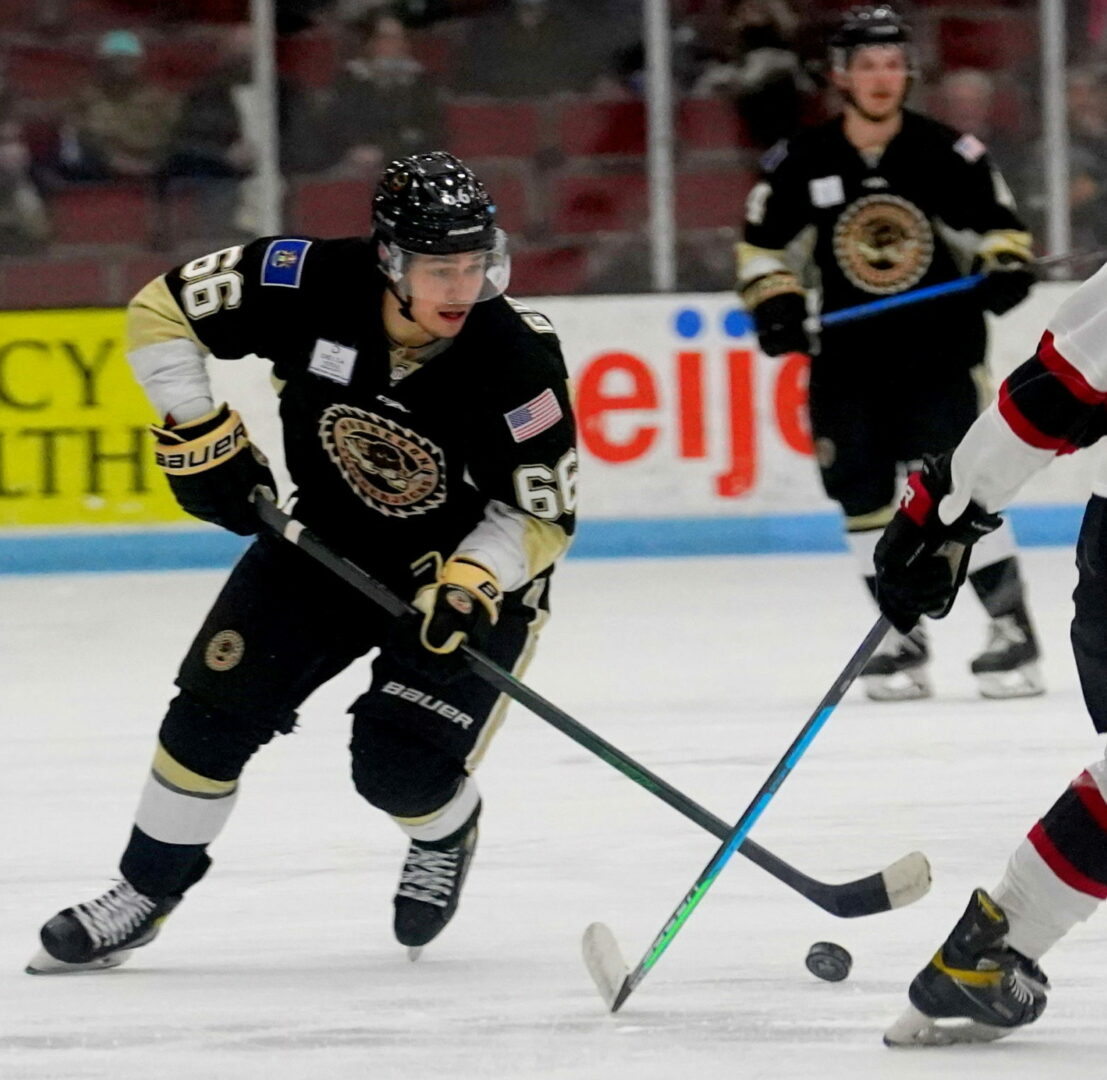 Danil Gushchin moves the puck for the Lumberjacks. Photo/Leo Valdez

Chicago now moves on to the USHL Clark Cup finals. The Lumberjacks will now pack and head home, after one of the most successful seasons in franchise history.

The Lumberjacks finished the regular season in second place in the Eastern Conference with a sparkling  34-16-4 record, and defeated Green Bay 2-0 in the first round of the playoffs, before running into Chicago.

The Jacks spent the entire season on the heels of the Steel, who led the Eastern Conference from nearly start to finish in the regular season. Muskegon got hot late in the season and pulled within a few points of Chicago in the standings, but failed to catch the Steel. 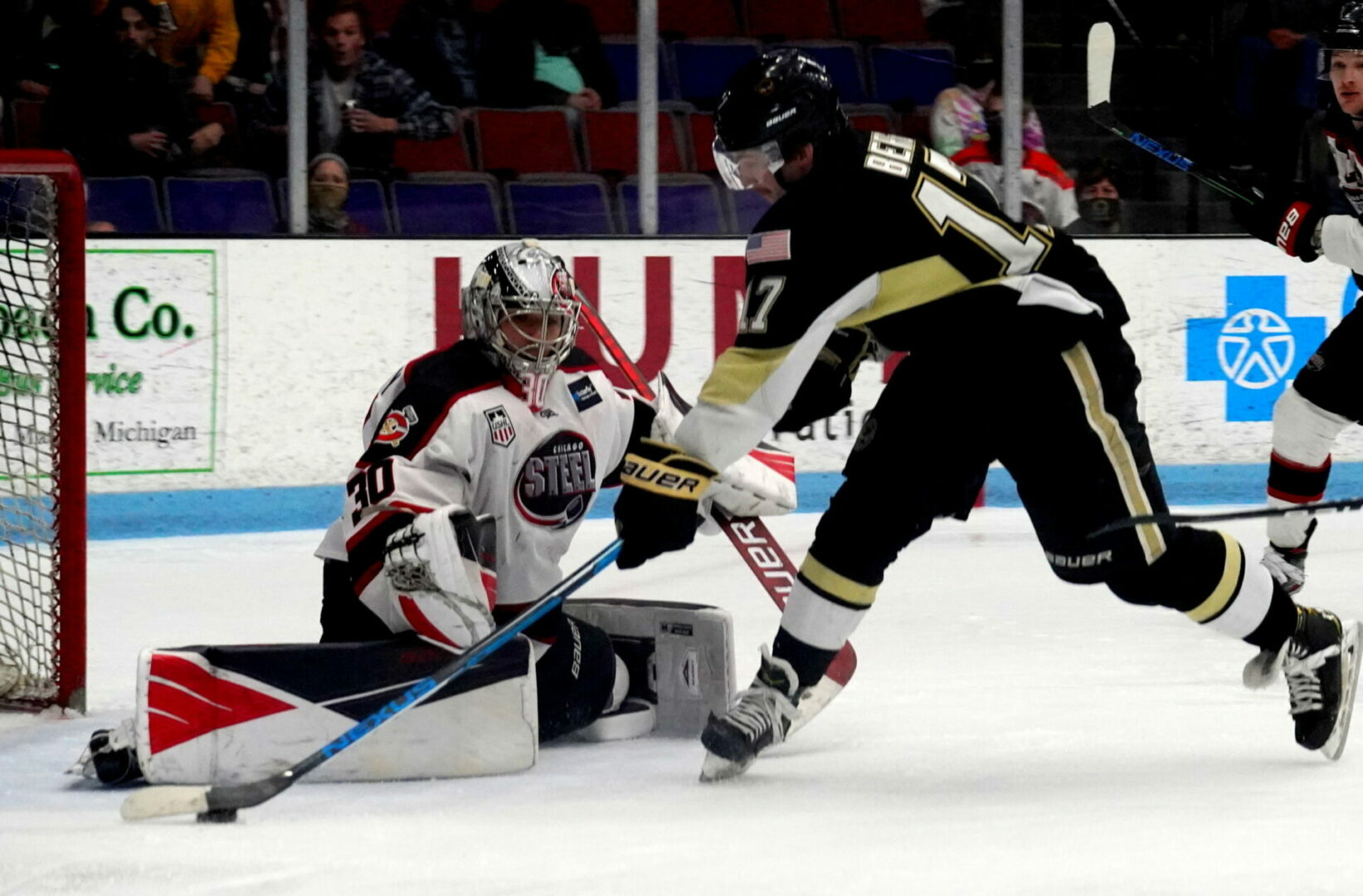 Cam Berg gets on the doorstep of Chicago goalie Simnon Latkoczy. Photo/Leo Valdez

The playoffs were an equally close call. On Friday night in Chicago, the Jacks led 1-0 and 2-1, but Chicago scored late to tie the game, then scored in overtime to take a 3-2 victory, setting up a must-win situation for the Jacks that did not result in a win.

“It was great hockey and that is a great hockey team,” said Lumberjacks Coach Mike Hamilton. “We were going to have to get a couple of bounces for us to beat them in a series. We proved that we were right there, but we made a couple of mistakes where we weren’t great defensively. We had two chances when we were up, but we let them score right back.” 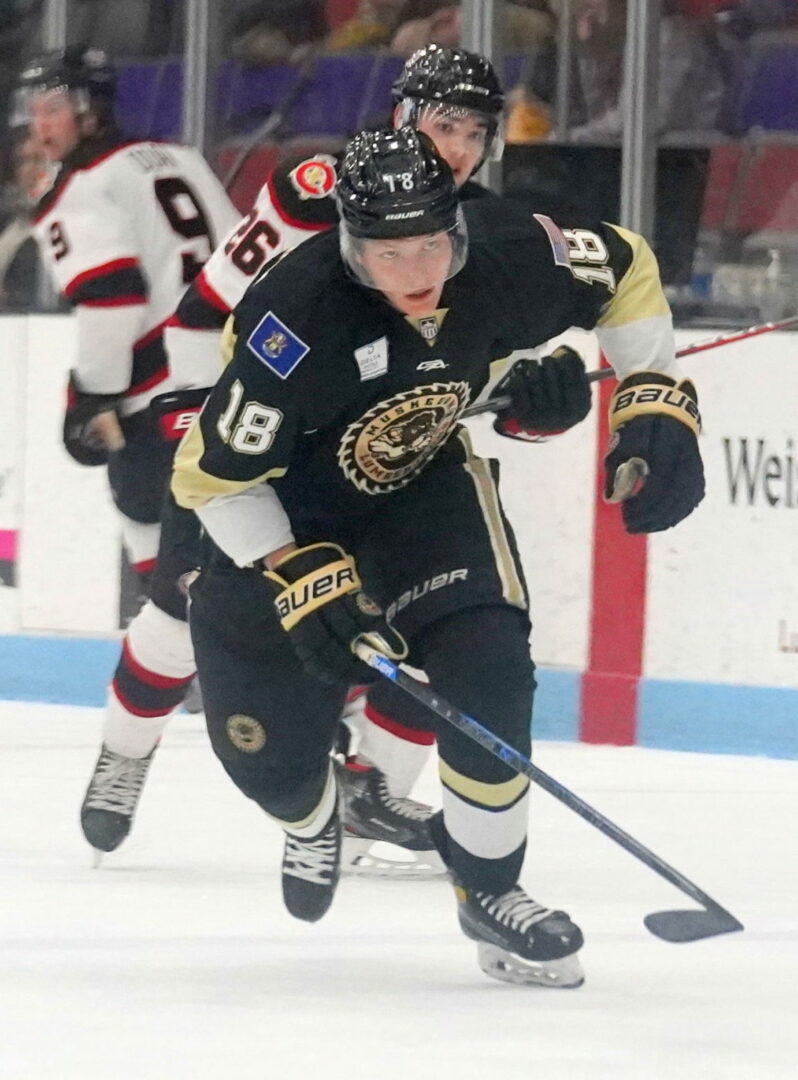 Owen Mehlenbacher hustles across the ice for the Lumberjacks. Photo/Leo Valdez

Hamilton agreed that a short three-game series might not have been a very accurate measuring stick to determine the best team, but he noted that the season had started very late due to COVID, team owners in the league had spent a lot of money to keep their teams on the ice, and everyone was eager to wrap up the season as soon as possible.

“I am sure no one would have complained to have two more weekends of hockey, but it was what the league decided to do,” the coach said.

The two teams gave the big crowd at Mercy Health Arena a great show on Saturday, with a fast-paced, high-energy game, which was expected out of the two top scoring teams in the league.

Chicago took a 1-0 lead just 2:37 into the game when Fantilla scored his first goal, five seconds after a Chicago power play expired.

The Jacks struck back with 1:52 left in the first period when Danil Gushchin took a pass, broke in alone on goal and beat Chicago netminder Simon Latkoczy, and the score was 1-1 at the first break.

The second period was a wild affair, with each team scoring three goals. 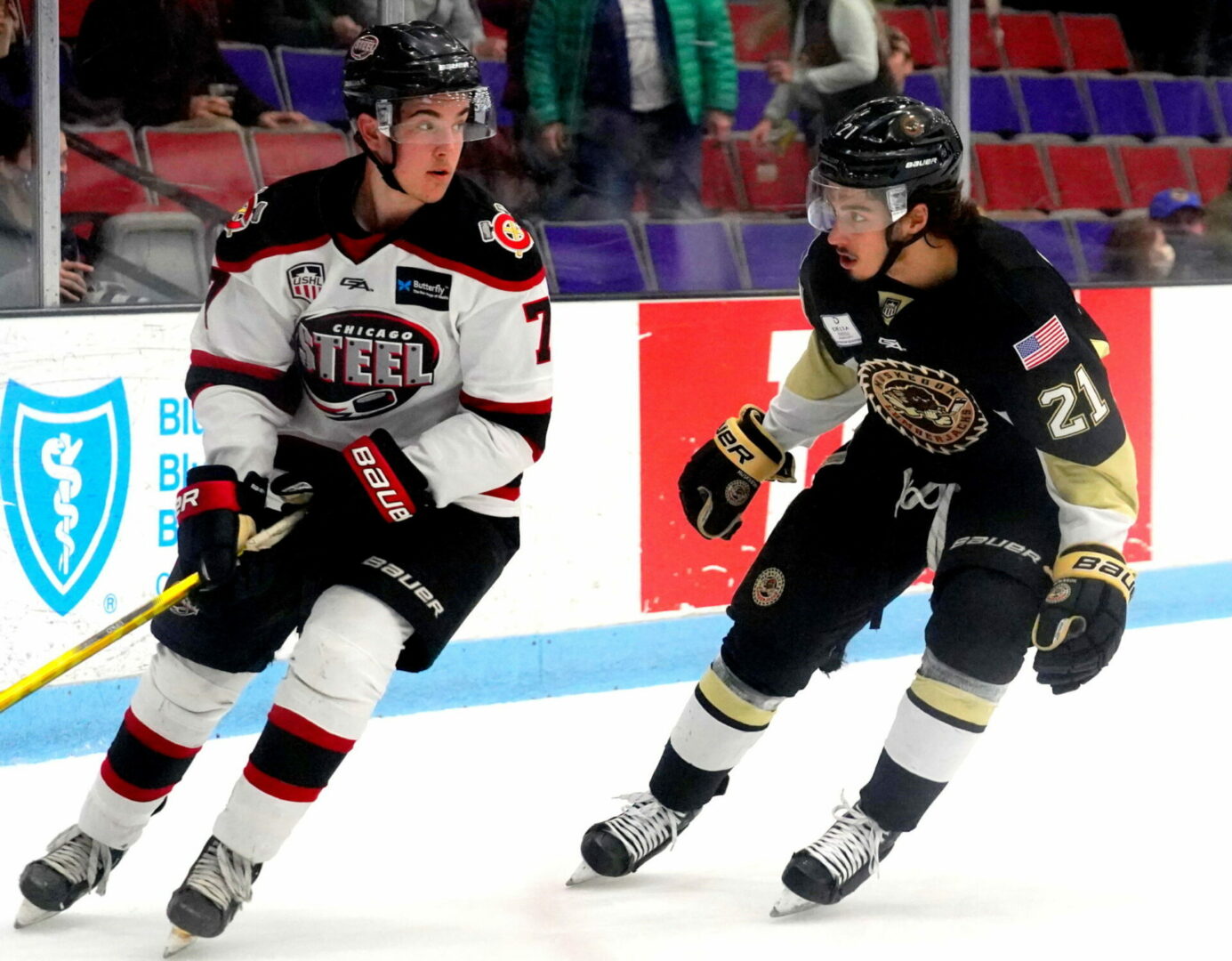 The Steel struck early in the period, getting a goal from Erik Middendorf at the 1:41 mark to take a 2-1 lead.

Muskegon evened the score at 7:04 of the second when Owen Mehlenbacher stole the puck in the Chicago end and make a quick pass to Cameron Berg, who scored with a shot from the left circle to tie the score at 2-2.

Gushchin scored his second goal just 48 seconds later, taking a pass from Jack Williams and finding the mark with a high shot, giving Muskegon its first lead, 3-2, at the 7:52 mark.

Chicago’s Matt Coronato scored on a breakaway less than two minutes later, tying the game 3-3, then Muskegon’s Jacob Guevin scored a power play goal with a long shot from the point, giving the Jacks a 4-3 edge. 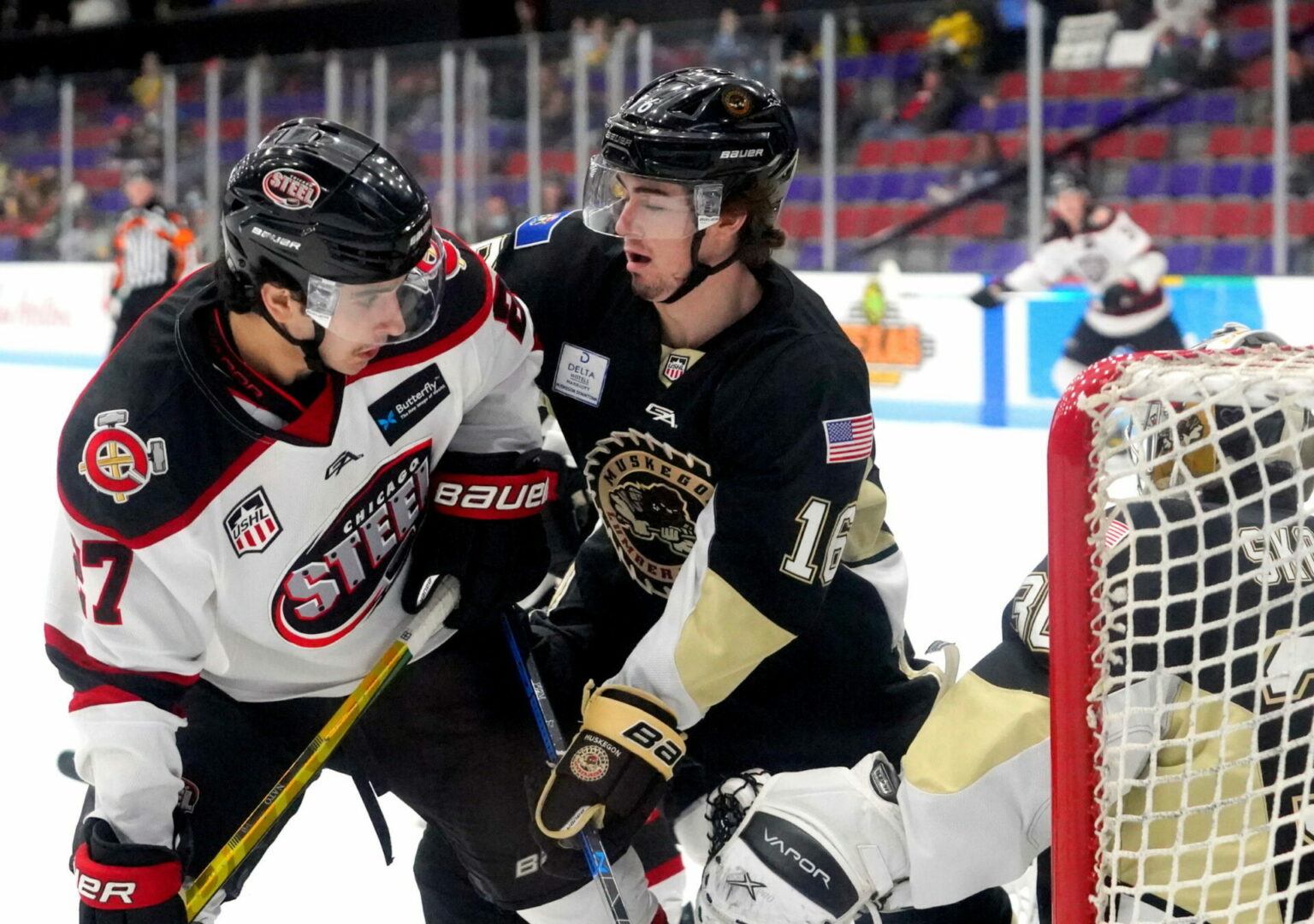 Muskegon defenseman No. 16 Kyle Aucoin gets in front of Matt Coronato. Photo/Leo Valdez

Berg appeared to score for Muskegon with three minutes left in the second period, but the goal was waved off when the referees called goalie interference on the play. The fans booed loudly at the call, because a Chicago player clearly pushed a Jacks player into the goalie, but the call stood.

“(The referee) felt we didn’t put enough effort in stopping ourselves from going into the goalie,” Hamilton said. “In the league we can’t review goaltender interference. It was what it was, and that is not why we won or lost. It was a well-played game and every little call is put on under a microscope.”

Coronato scored again from close range with 13 seconds left in the second period, and the game was tied 4-4 at the second break.

Fantilli’s goal 8:34 into the third period gave Chicago its final edge. The Jacks couldn’t muster another goal, despite pulling their goalie for an extra attacker in the final two minutes.

Quinn Hutson had two assists for Muskegon while Williams, Gushchin, Davis Pennington and Tanner Kelly each had one.

“It’s hard,” Hamilton said about having such a great season come to a sudden end. “This team truly wanted to win, and they sacrificed ice time and minutes because it was important to them. I am going to miss them. We had some really good men and this didn’t feel like a job. 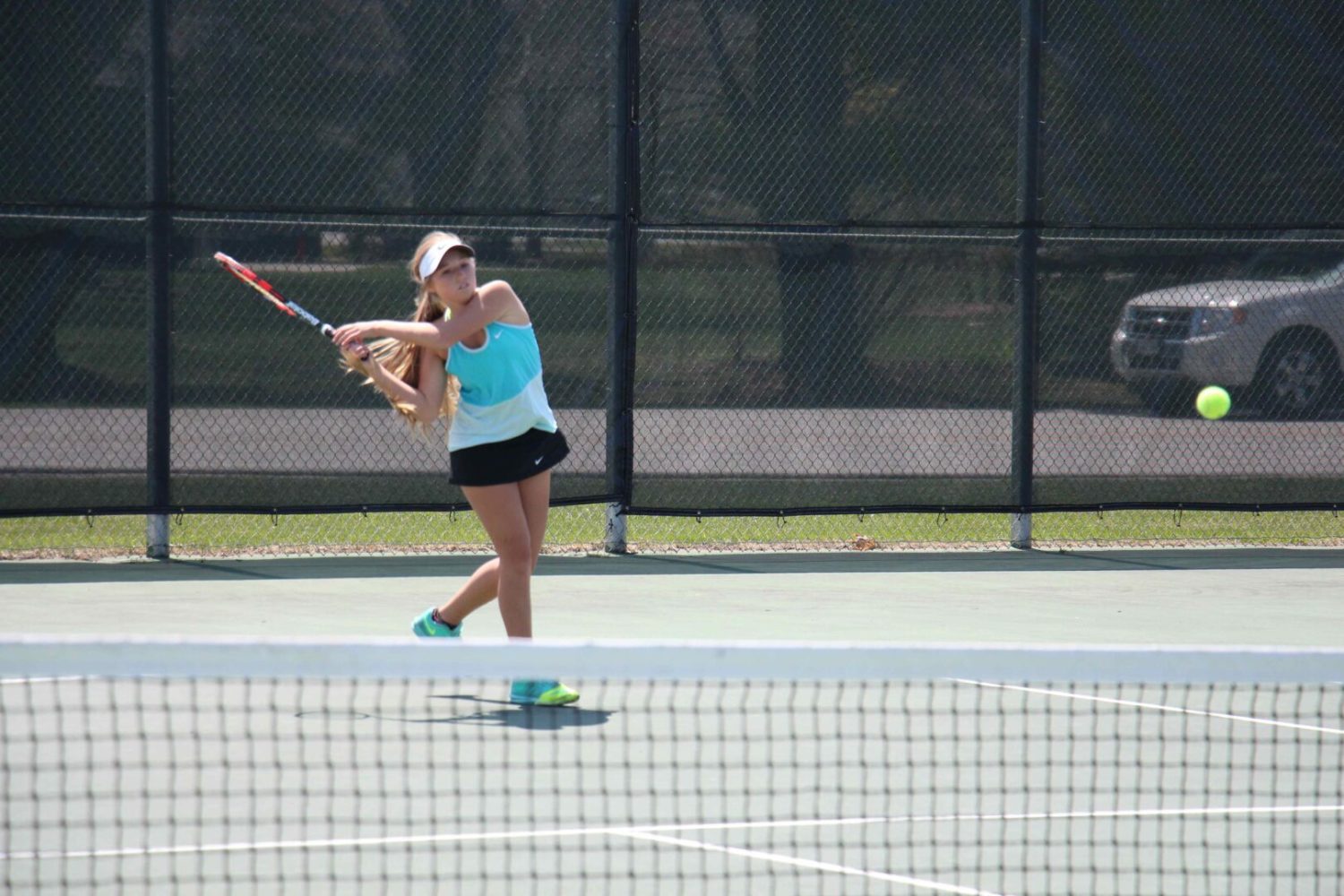 Packard packes a punch, but Whitecaps fall to 4-7 overall on season with home loss to Great Lakes