Clippers rebound from a six-run deficit, and get their first home victory of the season, with an 8-7 win over Lima Locos

MUSKEGON – The Muskegon Clippers have been snake bitten of late, losing four in a row, including three straight one-run decisions.

On Tuesday night at Marsh Field, it looked like the losing streak would continue after the Clippers allowed seven runs in the seventh inning, which erased a 1-0 Muskegon lead.

But the Clippers were resilient, scoring two runs in the bottom of the seventh, then adding another five in the eighth after the first two hitters were retired. That allowed them to steal an 8-7 win over the Lima Locos, giving the Clippers their first home win of the season. 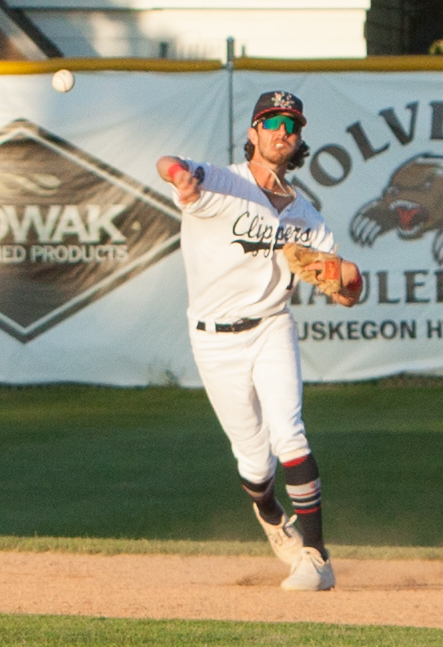 Crew Cohoes makes a play at shortstop for the Clippers. Photo/Jason Goorman

Levi Jensen put the comeback over the top with a two-run homer in the eighth inning.

The Clippers are now 6-5 on the season, good for third place in the Great Lakes League’s Northern Division.

Muskegon will remain at home to host the Royal Oak Leprechauns on Wednesday at 7:05 p.m., before closing the home stand on Thursday against Grand Lake Mariners at 6:05 p.m.

“We could have won all three of last week’s one-run losses, and we didn’t win any of them,” said Clippers Manager Walt Gawkowski. “Tonight was a great example of how baseball is a game of 27 outs. There is no clock, and nobody is going to take a knee or hold the basketball on you, and our guys never lost faith and battled, and it couldn’t have come at a better time.”

“I thought Mitch White was outstanding,” said Gawkowski. “He certainly deserved a win.”

The Clippers opened the scoring with a home run from Evan Balzano in the second inning to take a 1-0 lead.

Muskegon had a chance to increase its advantage in the bottom of the fifth with runners on second and third with one out, but hit into a line-out double play to end the inning. 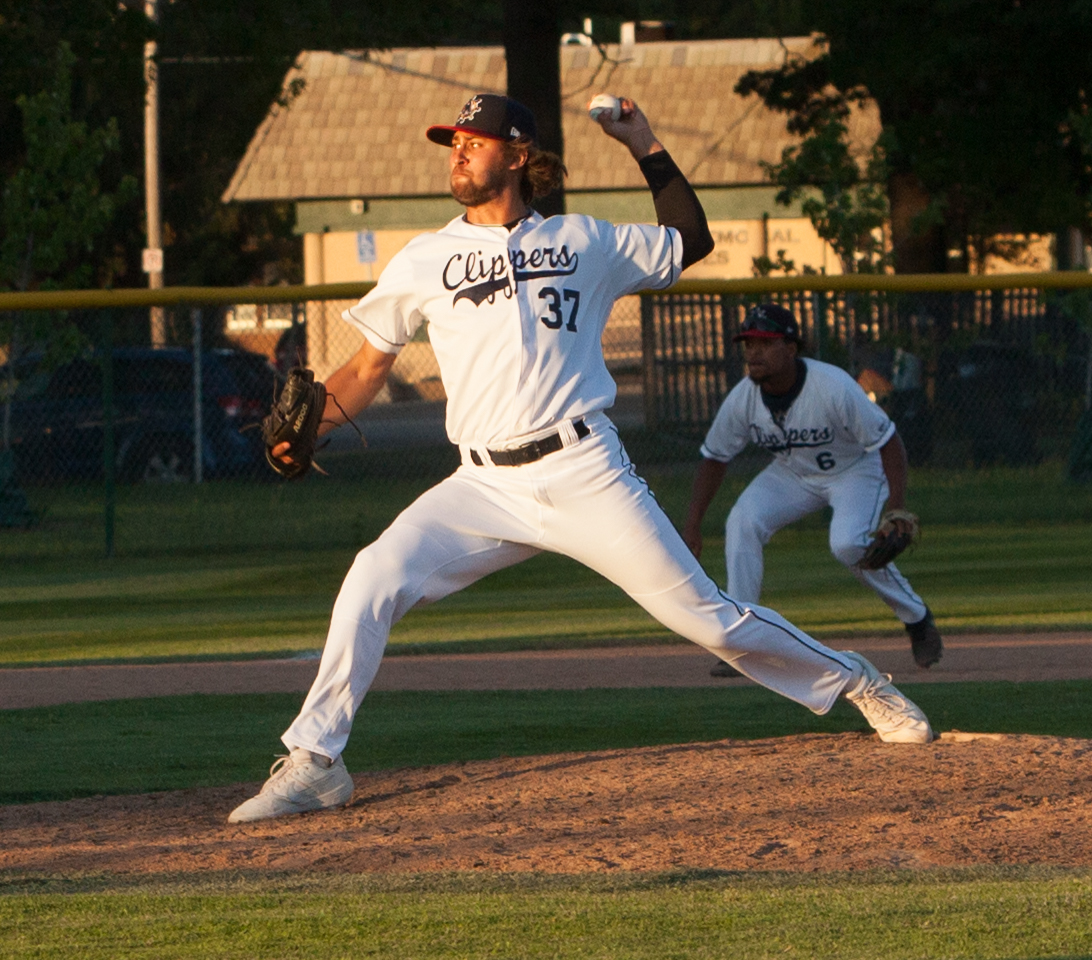 Thomas Sylvester delivers a pitch for Muskegon in the ninth inning. Photo/Jason Goorman

The game remained 1-0 until the seventh inning when the flood gates opened. The Locos scored seven runs in the frame on a three-run home run by TJ Reeves, a three-run homer by DJ Jackson, and an RBI single from Jake Smallwood.

The Clippers responded with two runs in the seventh, scoring on two wild pitches to cut their deficit to 7-3.

Muskegon had two outs and nobody on in the eighth inning before Noah Marcoux and Tre Jones both walked. Wes Mitchell hit a two-run double to cut the Clippers’ deficit to 7-5, then Balzano had an infield single that scored Mitchell from second base to make the score 7-6.

Jensen then came up to the plate and nailed a two-run home run over the left field fence to give Muskegon an 8-7 advantage.

“Levi Jenson is just one hell of a competitor,” said Gawkowski. “He has great leadership skills and I just love watching him play.”

“I knew that I had to put the barrel on the ball and try to get it to the next guy,” said Jenson. “Just the mentality of wanting to come to the ballpark after snapping a four-game losing streak, that’s what it’s all about.”

Thomas Slyvester picked up the win, recording the final six outs of the game, allowing no runs on two hits while striking out one batter.