NORTH MUSKEGON – Sooner or later all young athletes find themselves in pressure situations, with big games on the line.

North Muskegon freshman catcher Maddison Balon encountered that situation a little sooner than most players do, but she responded beautifully.

Her softball team was tied with Ravenna, a squad that beat North Muskegon twice in the regular season, with two outs and runners on second and third in the bottom of the fifth inning on Saturday. 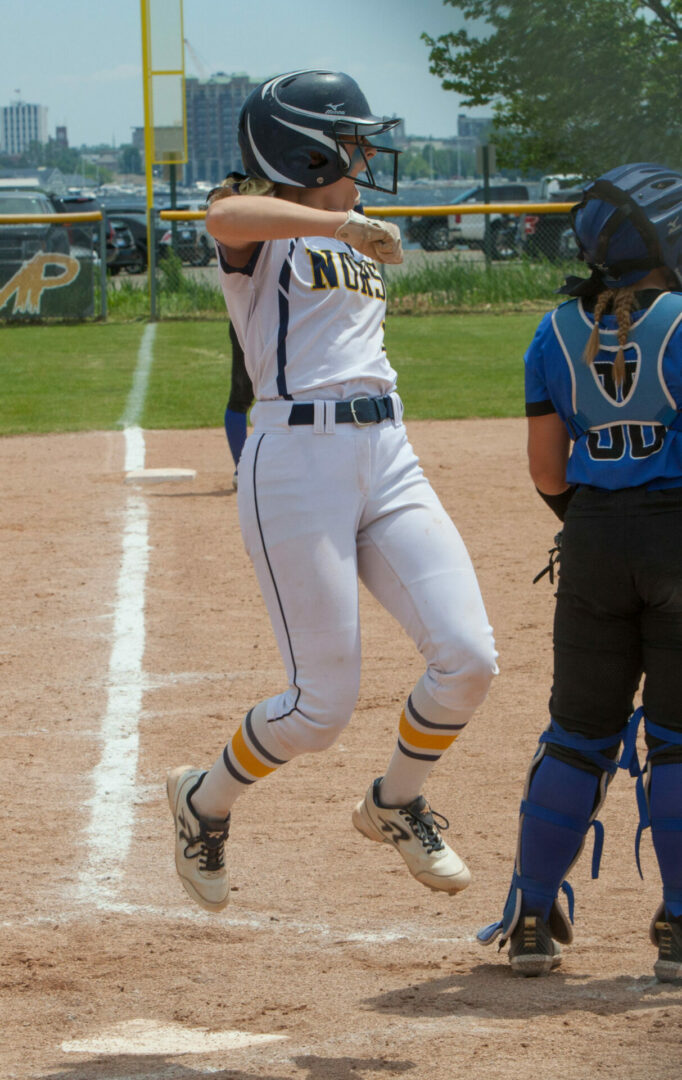 Emma Houseman jumps up after scoring a run for North Muskegon. Photo/Jason Goorman

Balon calmly worked a full count, and figured she might get something to hit on the payoff pitch, which turned out to be correct. It was a fastball right down the pike, and Balon laced a two-run single to center field, driving in two runs and giving North Muskegon a two-run lead.

That lead stood up behind great pitching and great defense, and the Norse walked away with a 4-2 come-from-behind upset victory over Ravenna in the championship game of the Division 4 district tournament hosted by North Muskegon.

It was the first district title for the Norse softball team in seven years, and the first for Coach Matt Houseman, whose team tied for third place in the West Michigan Conference in the regular season, and was not expected to win on Saturday.

North Muskegon, now 24-14 on the season, moves on to regionals next Saturday at Calvin Christian High School in Grandville. 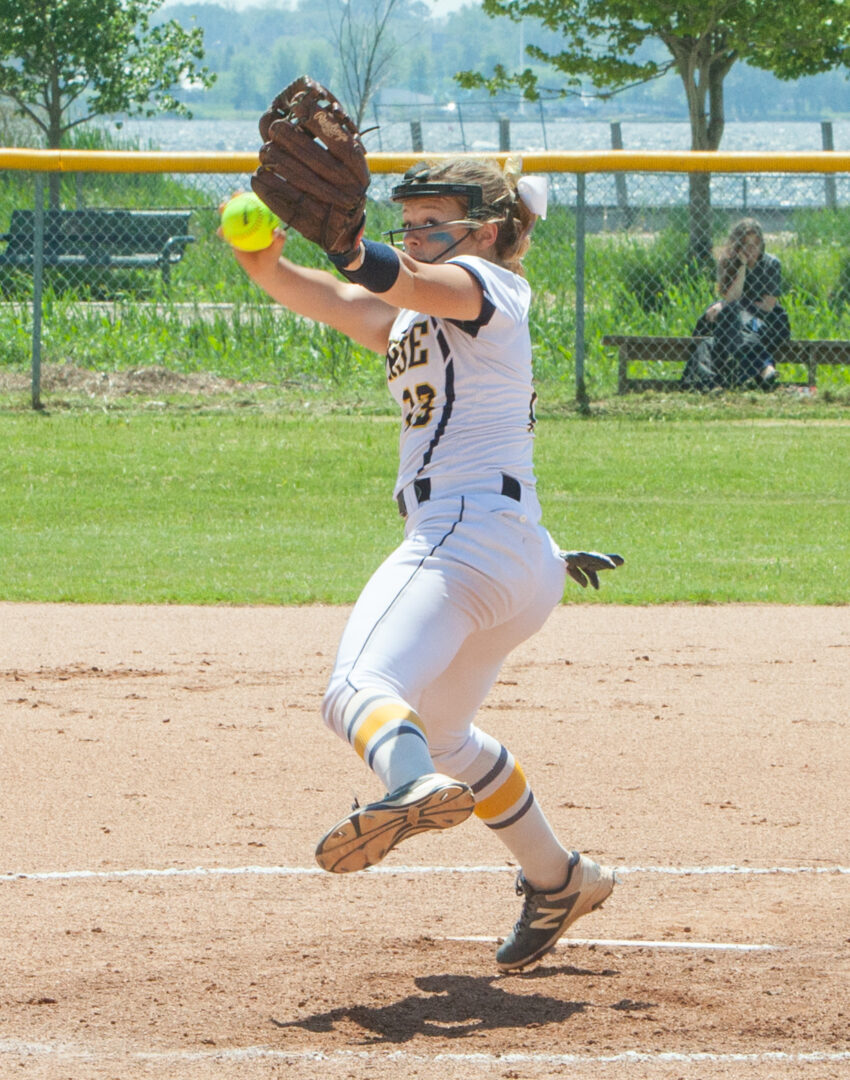 A berth in the regionals did not seem likely earlier this spring, with the Norse starting four freshmen on a consistent basis. But the team improved dramatically as the games went by, and were ready to shine in their biggest game so far.

“We talked earlier in the year, and we kind of knew where we were at,” Coach Houseman said. “We knew we had some talented kids, but we also had some young kids. We told them not to worry about winning or losing, just to get better, and they did. We tried to take some pressure off them, and it worked.”

The game was tight throughout. Neither team scratched out a run until the top of the fourth inning, when Ravenna’s Emma Gillard and Maddie Kilbourne both singled and Ellie Solem reached on an error, leaving the bases loaded with two outs.

Alexis McMahon took advantage of the situation by dropping a bloop single to center field, scoring Gillard and Kilbourne and giving Ravenna a 2-0 lead.

North Muskegon got on the scoreboard in the bottom of the fourth when Balon hit a leadoff double, advanced to third on a groundout, then scored on an RBI groundout by Isabella Mallory.

Ravenna encountered some defensive problems in the bottom of the fifth, allowing the first two Norse batters to reach base on errors. Megan Houseman then beat out a bunt single, loading the bases with nobody out, and Emma Houseman followed with an RBI single to tie the game at 2-2.

“She had a huge hit right there,” Houseman said. “We’ve got three or four kids I would have been comfortable with at that plate in that situation, and she’s definitely one of them. I was just hoping she would hit it somewhere where somebody wasn’t, and she did. It was a big hit for a freshman in that situation. 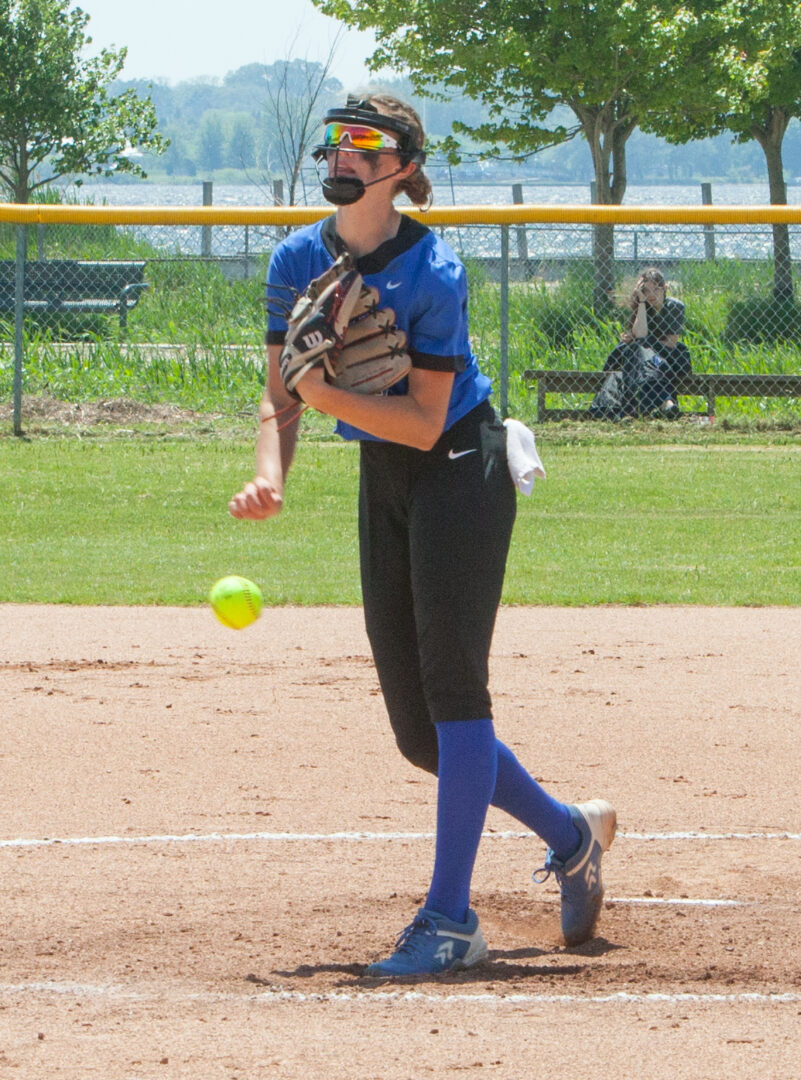 Megan Houseman (one of three Housemans on the team, all the daughters of the coach) pitched a strong game for the Norse, scattering four hits while striking out one and walking three in seven innings. Instead of trying to overpower the Bulldogs, she threw strikes and allowed her defense to do the rest, and they took care of business.

Twenty of Ravenna’s 21 outs were made on clean defensive plays. That included five of the last six outs in the sixth and seventh innings, when the outcome was still very much in doubt.

Third baseman Rylie Cooper and left fielder Baila Lang – both freshmen – were particularly strong with their gloves, cleanly handling several hard hit balls that could have dropped in and caused problems.

“(Megan) sent me a text yesterday, saying ‘Dad I really want the ball, I will get it done for our team,’ and it played out,” Coach Houseman said. “She threw a complete game and only had one strikeout. That means our defense was pretty good.”

Balon and Emma Houseman each finished with two hits for North Muskegon.

Ravenna finished the season with a sparking 25-5 record and a share of the West Michigan Conference championship. The Bulldogs reached the title game by beating Montague 6-4 in the semifinals earlier in the day. North Muskegon had a first-round bye.

Kilbourne led the Bulldogs at the plate in the finals with two hits. Gillard pitched well, tossing a complete game four-hitter with five strikeouts and only one walk.

“It was just one inning,” said Ravenna Coach Dave Sherman about the fifth inning, when the two errors started the North Muskegon uprising. “Defense can win or lose softball games. Megan (Houseman) did a nice job on the mound for them, too. She used the whole plate.

“It’s tough. I feel bad for all of the players, but I have three seniors who definitely didn’t want it to end this way. But we had a great year.” 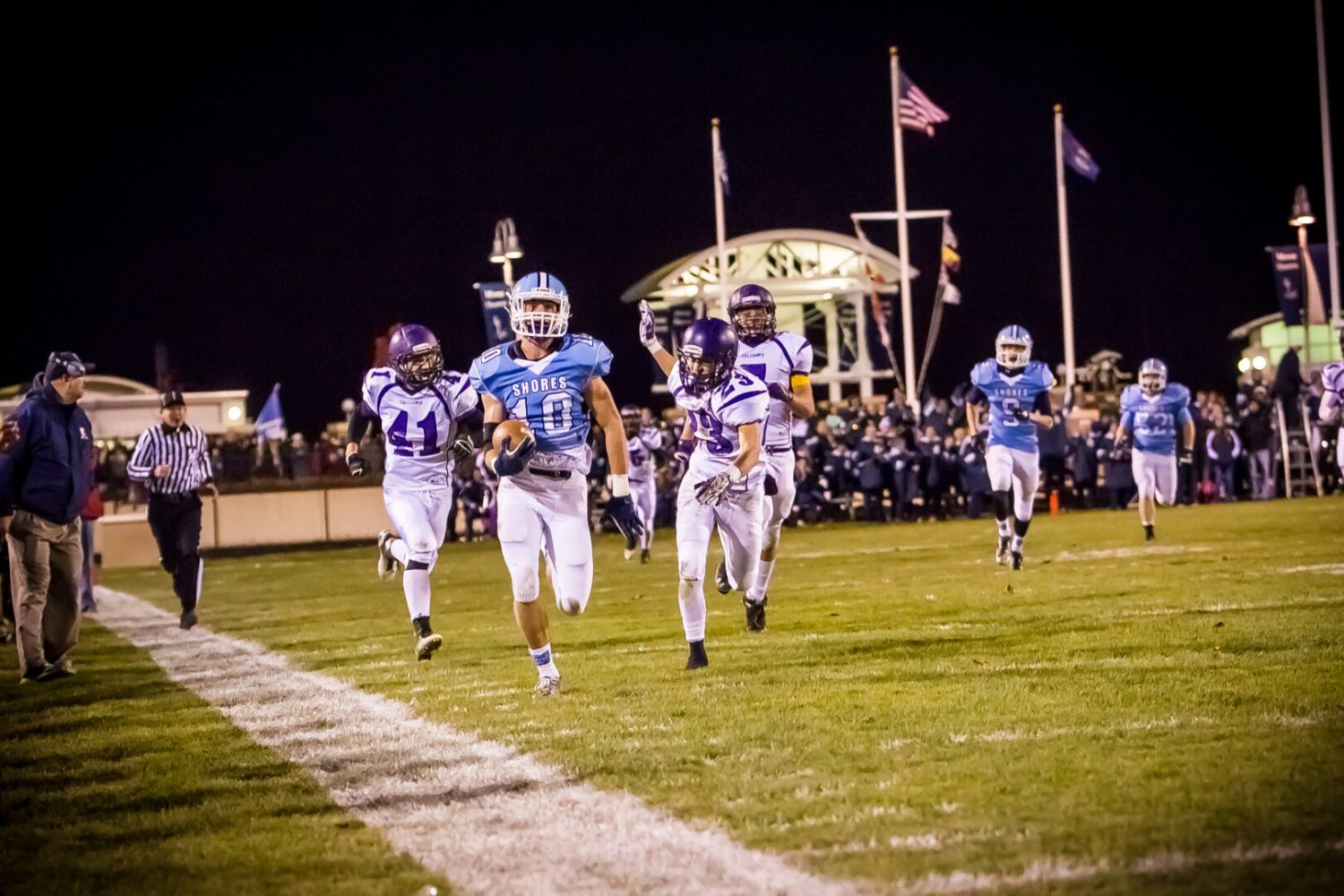