HOLTON – The Holton softball team has been in hot pursuit of a state championship for several years now, and the Red Devils may finally reach that lofty goal this weekend.

It would be the first state softball title in school history – and as Holton Coach Kirk Younts recently discovered through a little bit of research, it would also be a first for Muskegon County.

No county varsity softball team has ever won an MHSAA state title, or even made it to a championship game, so the Red Devils will be chasing some pretty big history this weekend. 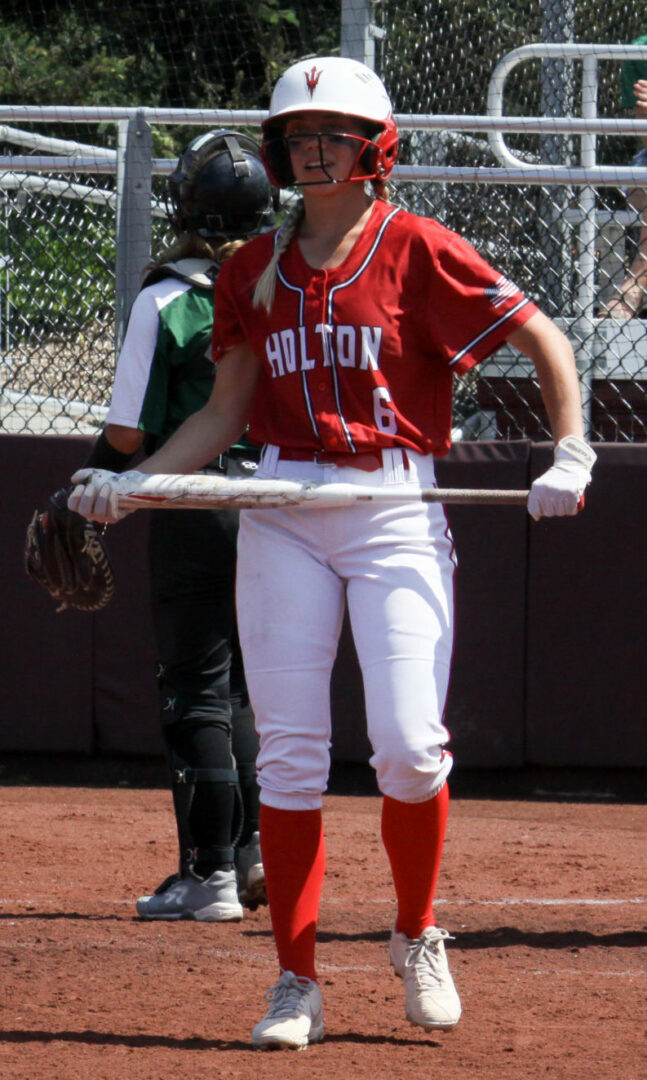 Courtney Boes gets ready at the plate for Holton. Photo/Beth Olson

The final leg of their championship chase will begin on Friday morning, when they play Rudyard in the semifinals at 10 a.m. at Michigan State University. The winner will move on to the Division 4 state title  game on Saturday at 3 p.m. against the winner of the Unionville-Sebewaing-Bridgman semifinal.

“I do not see where a Muskegon County team has ever even made it to the state championship game,” Younts told LocalSportsJournal.com. “We had a little talk, and I let (the players) know that they have a chance to do something special, and it’s very possible. If we play like we did (on Tuesday), anything is possible.”

Even if Holton was not in line to be the first team from the county to win a state title, the Red Devils would still have plenty of motivation to get the job completed. They’ve been a powerhouse for years, and advanced to the state semifinals in both 2015 and 2017 before being eliminated.

While it’s great to win conference, district and regional championships, winning the ultimate trophy is a growing itch that really needs to be scratched, according to Younts.

“You want to get over that hump,” said Younts, whose team enters the semifinals with a 36-6 record, and has been ranked No. 1 in the state among Division 4 schools all season. 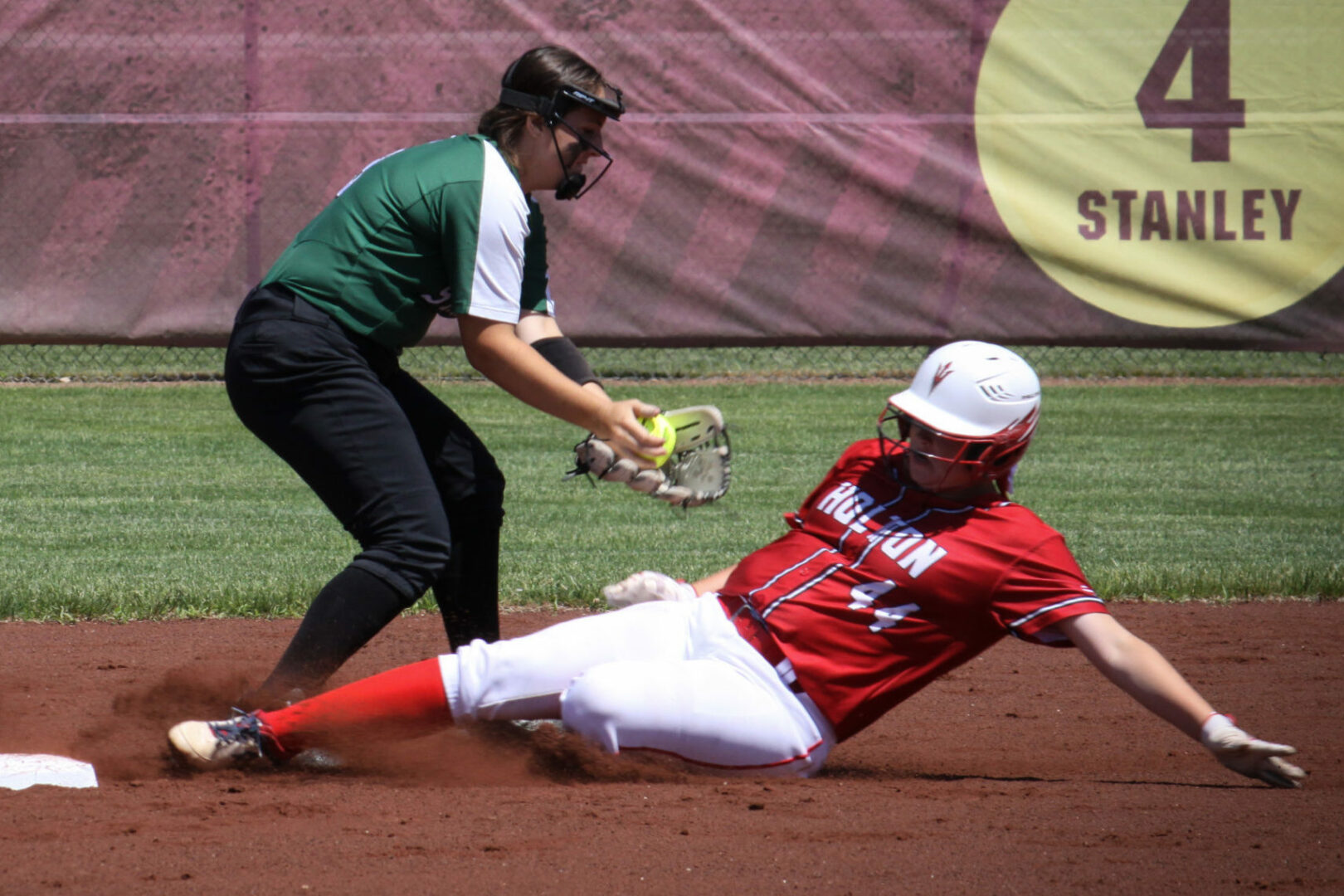 Younts said he’s learned some valuable lessons over the years during his team’s tournament runs. One big lesson was the necessity to schedule very tough opponents from bigger schools in the regular season. That might lead to a few extra losses, but the team is toughened up and more than ready for all challengers when the state tournament rolls around.

Three of Holton’s six losses this year have come against Division 2 teams – Big Rapids, Oakridge and Hamilton. What was lost on the field was gained in the experience of playing high quality opponents and learning what it takes to beat them.

There have also been several impressive wins against teams from much bigger schools, including a 10-2 victory over Division 1 Mona Shores on May 1.

“We try to play in tough tournaments to get us ready for tough competition,” Younts said. “We have to play teams like Ravenna, Montague, Oakridge and Mona Shores. That’s what gets us ready for the end of the year. I’ve learned that.”

So far the benefits of playing a grueling schedule have been obvious for Holton in the Division 4 state tournament. The Red Devils easily dispatched Pentwater 15-0 in districts, beat Marion 17-4 and Mesick 7-1 in regionals, then downed Portland St. Patrick 6-1 on Tuesday in the state semifinals.

As Younts said after Tuesday’s game, “they are playing some very good softball at the right time of year.”

Younts said every one of his three teams that reached the semifinals since 2015 has been very talented, but he thinks the 2021 squad is the best overall.

“This is the best one through nine lineup I’ve ever had,” the coach said. “My first year (2015) we were 37-0 going into the semifinals and we lost. This year I have the most consistent nine players I can put out there.”

The amazing part is that two of the very best players on the roster are freshman – Ryann Robins and Abbie Fowler – who are both just 14-years-old.

While Holton expected to be very good this spring with just the upperclassmen on the roster, it’s clear that the addition of the two super freshman has pushed the Red Devils to new heights.

“They have both had great seasons,” Younts said. “If you didn’t know any better, you would never know they were freshmen. They are tight with the whole team. Sometimes I forget that they are only 14-years-old.”

The Red Devils have a lot of other weapons, as well. Kylie Gould had a .388 batting average, followed by Kennedy Greene (.381), Gianna Reed (.351), Kendall Greene (.328) and Maddison Bossett (.305). Gould is also a top pitcher, with a 10-1 record and 109 strikeouts this spring. She pitched the win over Portland St. Patrick in the quarterfinals on Tuesday.

With so many good players, the Red Devils have an amazing amount of confidence, Younts said. The players seem relaxed and ready to roll in all situations, even if their head coach gets a bit nervous at times.

“I’m more worked up than they are,” said Younts, who added that assistant coaches Morgan Wahr and Brandi Rice have also played very big roles in the team’s success this season. “I’m sick to my stomach on game days, while they relax and play music on the bus – they think they are great singers – and just have fun.

“I’m more nervous this season than I ever have been. I recently had a conversation with a good friend of mine, and I told him that it feels like there is no giant team standing in front of us, for the first time. But I have reminded the players that we could be the giant that stands in front of us (by making mistakes). We might be the only team that could beat us.”