By Craig Beilfuss
LocalSportsJournal.comLegendary, Hesperia Community Schools veteran high school coach, Dan Homan passed away on June 23. Homan was a Hesperia native. He was a Hesperia graduate and an educator for over thirty years in Hesperia, teaching science at Hesperia High School. His accomplishments on the athletic side are many.

“Dan had a lot of back pain because of herniated disks and had lung issues. He was having a hard time getting around and just got worse rather than better,” commented Homan’s wife, Eileen Homan. “It was sad to see him go downhill. Dan filled a fuller life than most. He would go in early before school started to help kids and for so many years coached all year long. Then he would play baseball in the summer and many years of fastpitch softball. I feel he lived a very full life even though it was cut short. We will miss him lots,” said Mrs. Homan. 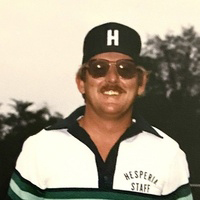 First year Athletic Director and educator at Hesperia Community Schools, Tony Grimard, talked about the longtime Hesperia coach. “I have taught and coached at Hesperia for 25 years, so I have had the pleasure and honor of working with Dan for years.”

“Dan’s passing is a huge loss for the entire community of Hesperia. As a teacher, a wrestling coach, a softball coach or a football coach, Dan has had an impact on so many lives here in Hesperia, said Grimard.

The Athletic Director continued on, “The massive public outcry of support of Dan is a testament to the years Dan dedicated to helping young people. Dan will be forever remembered as a legendary figure in history of Hesperia athletics.”

Coach Homan’s accomplishments on the field, would lead to a host of awards over his coaching career, with none probably being bigger than his 1999 Induction into the Michigan High School Football Coaches Association Hall of Fame, in which he was presented with a plaque and a ring by the Association and former University of Michigan Head Football Coach, Lloyd Carr. Homan was also inducted into the Michigan High School Coaches Hall of Fame in 2011.

The longtime skipper had a great relationship with the media as well. Recently, veteran radio announcer Jon Russell, talked about his relationship, with the legendary coach from Hesperia. “When I started sports broadcasting at WSHN in Fremont back in the fall of 1986, Dan was among the first group of coaches I struck up a professional relationship with, said Russell. “My wife (Arleen) was a Hesperia grad and knew Dan and Eileen, having had Dan as a teacher and Eileen as an advisor so we had something in common with the Homan’s from the start.”

“Dan would warn me he never felt comfortable doing press interviews. He was a man of few words but I soon learned the words he did say were worth listening too. Even though interviews weren’t his favorite thing he soon felt comfortable enough with me to give me what I needed to know without a lot of “coach Speak.” He would give you an honest answer to an honest question.”

Russell continued on, “Dan was a team guy and that team included at home with Team Homan. Eileen and Dan were high school sweethearts and if Dan was coaching an event, you could bet that Eileen was around doing her job. I remember many a cool fall evening sharing a press box window as Eileen filmed the games for Dan and she would even act as a spotter for me calling out the names of tacklers if I missed someone.”

The longtime radio announcer concluded his comments about his coaching friend, talking about a letter he received from Homan, shortly after he announced his retirement from coaching football at Hesperia. “I knew Dan was coming to the end of his football coaching career and I asked him to let me know when he was going to hang it up because I would love to do a story on him for the local Newaygo County weekly publication, the Times Indicator. I use to freelance some stories and certainly felt when the time came, I wanted to be on top of the news.”

“He told me he had the 15-minute rule. He said that’s the time it took for him to walk from his classroom to the administration office to tell then he had, had enough. I got a call from Dan one morning. “Jon, I just invoked the 15-minute rule.” That’s how I learned he retired as football coach. Dan gave me a great story which was published in the Times Indicator.”

“A letter I cherish to this day,” says Russell. “In it he told me how much our professional relationship meant to him and how much he enjoyed listening to the broadcasts and the tapes I would make for him and the kids as keepsakes. He said the article I had written, brought him to tears and said he couldn’t thank me enough. Our thoughts are with Eileen and their girls and the family and indeed Panther Nation. Heaven got a little more green and white,” said Russell.

Visitation was held at Crandell Funeral Homes in Fremont on Monday, June 28th and Tuesday, June 29th, with a funeral that followed. In lieu of gifts the family would ask that you contribute to the Dan and Eileen Homan Scholarship fund at the Fremont Area Community Foundation. The fund was established by their daughters to help Hesperia High School student-athletes continue their higher educational goals and honor the Homan’s legacy of commitment to community. The Foundation will match up to $500 per donor household. Donate at www.danandeileen.org.

“I can’t express in words how I feel with the outpouring of support and love from so many. It has been so overwhelming to deal with the loss of Dan. I can’t thank you all enough for being there for me and my family. It is comforting to know we have so many friends to lean on. Thank You. We are blessed,” said Eileen Homan.

Dan Homan is survived by his wife Eileen, four daughters and a host of relatives and friends.