You have to go all the way back to 2004 to find the last time the Hart Pirates football team started the season 2-0.

According to Coach Joe Tanis, the last conference championship was in 1968. Furthermore, the program has never qualified for the playoffs other than last season when all the teams went into the postseason. 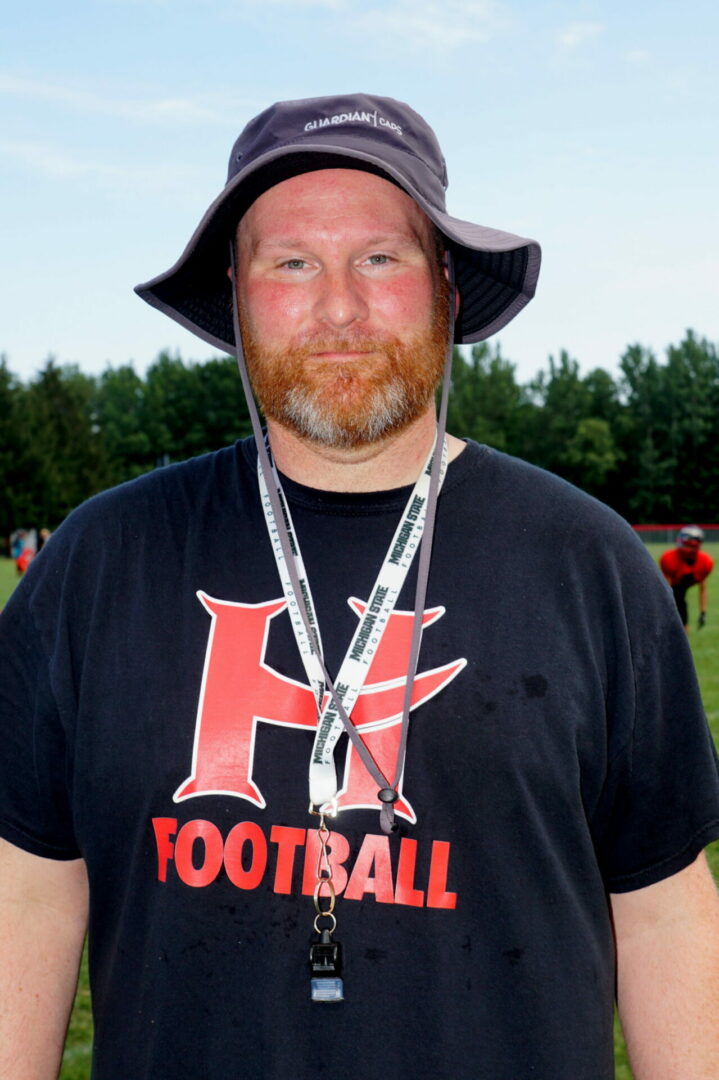 Tanis and his Pirates will hit the road at 7 p.m. Friday evening when they travel to Montague to take on the defending Division 6 state champion.

Tanis, in his first season, is also employed as a premier sub at Hart High School. Tanis came over from Wyoming High School, where he was the defensive coordinator. Prior to that, the veteran coach made stops at Ravenna (2019) as the offensive line coach, Orchard View (2012-2018) as the head coach, Napoleon (2011) co-defensive coordinator, Northern Michigan University (2009-2010) video coordinator, Galesburg Augusta (2008) defensive coordinator; Olivet College (2005-2007) wide receiver coach and other multiple roles.

According to Tanis, he got his real start at Grandville Middle School, coaching seventh grade football right after high school graduation.

So, what brought the longtime coach to Hart and why would someone want to take over a program which is not known for having a winning tradition in football?

“Honestly, it was not on my radar for awhile,” Tanis said. “I didn’t want to take a head coaching job just to just take a head coaching job because I knew I needed the right job,” said Tanis. “Ravenna AD Kyle Jawor, told me that I should apply multiple times because he said he thought I would really like the administration. I had more people who said under no circumstance was I to ever take that (Hart) job if I planned to keep coaching. I applied and started doing my research and really loved what I saw.

“K-12 is all on one campus and they were really big into people and you could tell the culture in the building was a positive one and a great one,” Tanis said. “I spent most of that time with AD (Tim Hertzler), Principal (Brandon Bruce), and Superintendent Mark Platt.”

Bruce left to take a superintendent’s job and former Montague principal Troy Moran has taken over.

“I think he brings a great energy to our building,” Tanis said. “I couldn’t be more grateful as I believe they are fully committed to giving our kids a great experience and a chance for success.

Tanis said the community is a good fit for his family. His three kids will attend Hart schools. Tanis is looking forward to the challenges that lie ahead.

“Very few jobs exist where a team has never earned the right to the playoffs,” Tanis said. “I think the opportunity to do some things that have never been done in a community is an exciting and rewarding challenge. The timing of going to a new conference in a year added to the timing piece of things aligning to help turn the program around. To accomplish what we are seeking to do is going to take a lot more than just a couple football coaches. We feel like those things are in place as we seek to go further.”

After Hart opened the season with a 40-20 win at Holton and then won its home opener last Thursday with a 30-22 victory over Kent City. 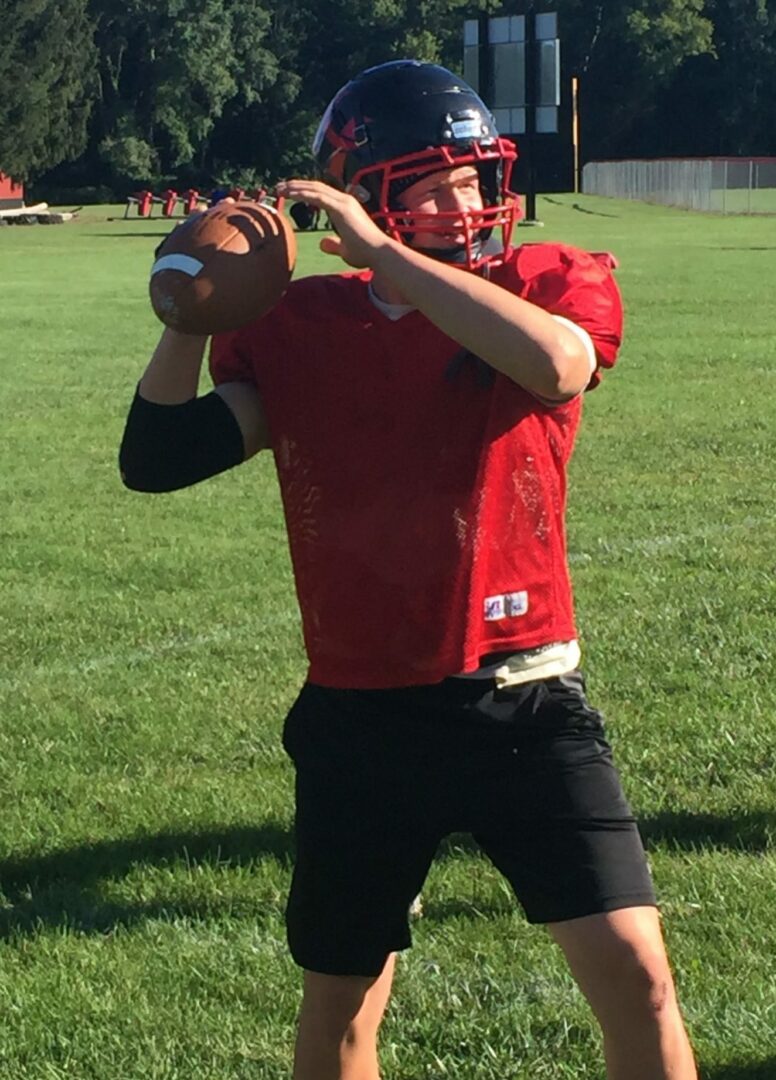 That victory created quite a buzz through the Hart football program.

“A lot of people have described a buzz in the air and excitement around the program unlike anytime they can recall, said Tanis. “I think that’s awesome as we try and get more people involved. We have a great staff in the high school that is very invested in our kids, in the district, including great support from the teachers, grounds, custodial, and support staff.”

Tanis hopes that confidence continues to be contagious through all aspects of the program. Tanis points to the wrestling program, led by Coach Altlands and Coach Smith, as one key to the early success. And, of course, having players buy into the coach’s way of doing things doesn’t hurt one bit.

Tanis, a 2001 graduate of Grandville High School, played football for four years under Irv Sigler III and would later go on to play collegiate ball at Olivet College for Irv Sigler Jr. Those stops helped formulate Tanis’ way of doing things as a coach.

“I think defensively, we have already made great strides.” Tanis said. “Our defensive staff, led by defensive coordinator Jacob Tumele, has had great buy in. The kids made a major jump from week 1 to week 2. I think our defense has done a great job eliminating fatal plays and playing great in the red zone.”

Tanis also is impressed with his team’s ability to tackle even with a large group of new and young players in the program. The technique has been sound, getting aligned in the right spots and using good angles to pursue.

Tanis, is quite pleased with the current makeup of things on the offensive side of the ball.

“Offensively, we have used a lot of different guys and combination of kid’s especially in the skill spots,” Tanis said. “But, I feel like we have five or six kids who should have a chance to touch the ball every game.”

There were some struggles against Kent City, but much of that credit, according to Tanis, is the skill of the Eagles’ team. Big plays in key moments also have helped the Pirates in the opening two weeks of the season.

Tanis knows there is still much room for improvement.

“We need to keep cleaning up in all areas of the game,” Tanis said, “I think we have played really good complimentary football in all three phases so far and that’s been critical. We have done a decent job of protecting the football and we feel like we have made major strides in the special teams department.”

Tanis and his staff, haven’t set any goals in terms of number of wins or losses, conference championship or making the playoffs for the first time in school history. But you get the feeling they are looking forward to their Friday evening matchup with the Montague Wildcats.

“We haven’t really talked about team goals,” says Tanis. “I think goals are important, but we are even more focused on growth. I feel like when people achieve a goal they all of a sudden become somewhat complacent.’

Scoring 30 or more points in back-to-back games hasn’t happened for the Pirates in more than a decade. It’s never happened in three straight games. If that’s going to happen, it will have to come against the defending state champions, which defeated the Pirates 75-0 a year ago.

“My message to the fans would be that we have a long way to go, but we are also just getting started,” Tanis said. “We are going to face a lot of challenges yet this fall and we hope to just keep improving and changing the perception of Hart football within our team walls, but also in the school, community, and beyond as well.

“Our kids can feel the energy and appreciate the crowds we are drawing.”