Whitehall rebounds in WMC showdown against Ravenna, shuts out Bulldogs 42-0

WHITEHALL — After last week’s tough loss to West Michigan Conference power Oakridge, the Whitehall Vikings wanted to bounce back in a big way against another conference foe, Ravenna.

The Bulldogs, coming off a pair of wins and looking to keep their hot start going, also had their thoughts fixed on Whitehall. 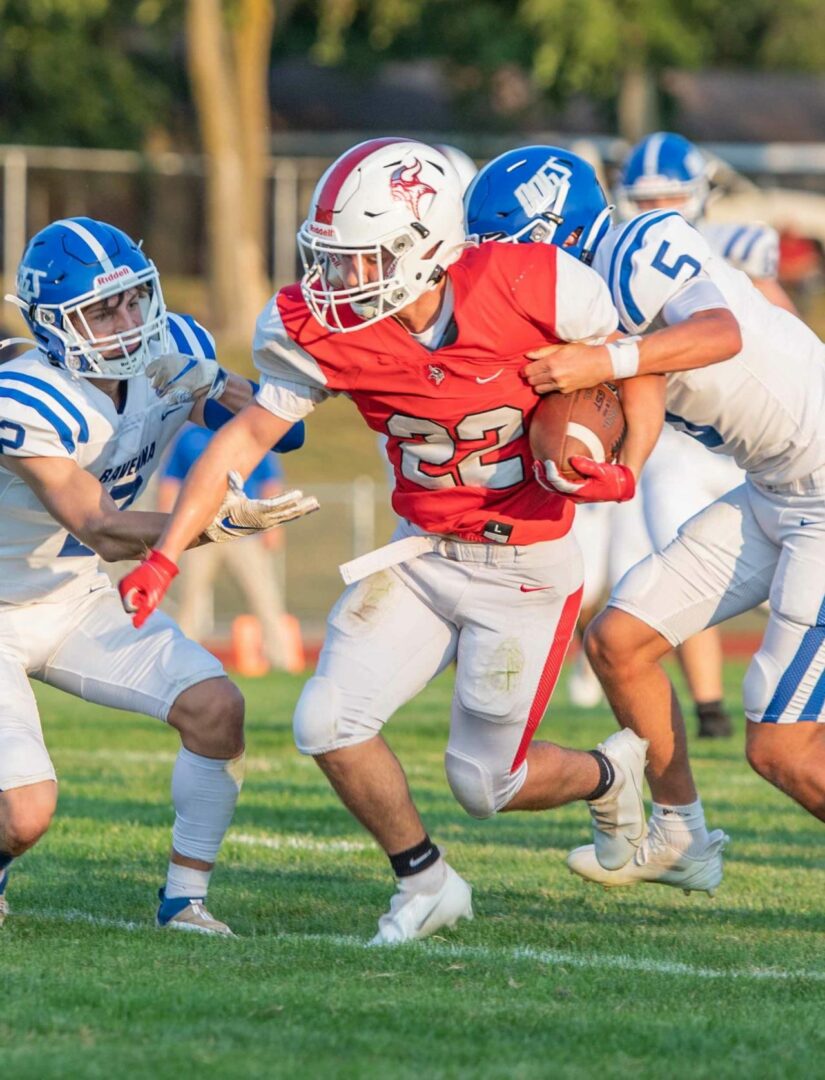 It is safe to say the Vikings feel a lot better now, beating Ravenna 42-0.

The vikings racked up 391 total yards and kept the Bulldogs to only 154 total yards.

Senior Alec Pruett led the rushing attack for the Vikings with 151 yards on 20 carries along with two scores.

Whitehall built a 21-0 lead by halftime that was sparked by a 17-play eight minute possession that led to the Vikings’ opening seven points.

One of three touchdown passes on the night, Stratton was 6 of 9 passing for 92 yards. He also had eight rushing attempts for 89 yards.

Ravenna senior quarterback Kyle Beebe tried to get his team’s offense clicking and connected on a 12-yard pass to Grant Becklin to get the offense rolling. But on the next play, a Bulldog fumble resulted in a Whitehall recovery by Jackson Cook.

Cook then forced another turnover off an interception that was returned well into the Bulldogs zone. 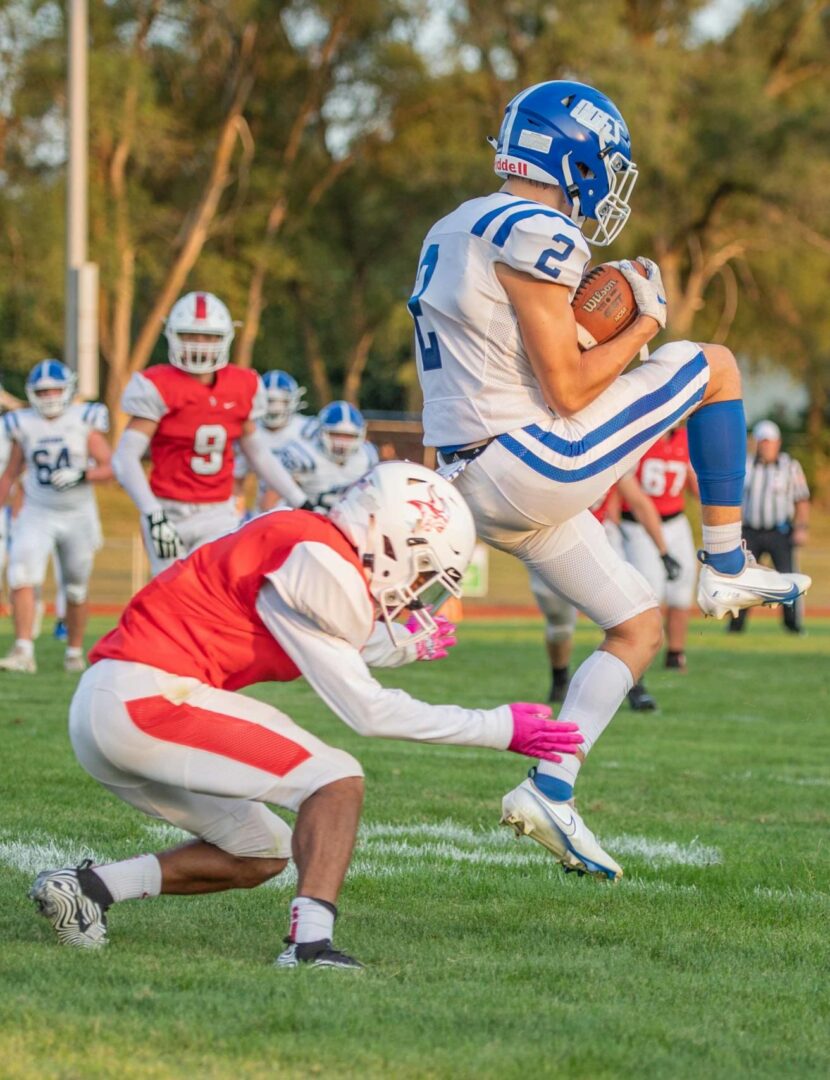 Ravenna’s Grant Becklin hauls in a pass for a Bulldogs. Photo/Eric Sturr

After a huge Reavenna return to the 47 yard line by junior Hunter Hogan, the Bulldogs looked to strike back.

But Whitehall senior Owen Scott saw otherwise, coming up with an interception three minutes before half to set up the Vikings offense again.

Brodie Fogus helped the Viking capitalize on the Ravenna turnover, completing a 22-yard strike from Stratton.

Whitehall did not take long to set the tone in the second half, thanks to a 30-run from Nate Bolley that set up his own 20 yard touchdown run.

Leading 28-0, Whitehall was in full control.

The Vikings’ defense was able to force Ravenna into a three and out on the Bulldogs’ first drive of the second half. With pressure on special teams, Whitehall was able to get Ravenna to shank a punt that was downed on the 45 yard line, in Bulldog territory.

Whitehall’s Stratton took advantage of the good field position, throwing a 45-yard touchdown pass to Fogus and a 35-0 lead.

Fogus pitched in on the defensive side shortly after, coming up with an interception to set up another Whitehall scoring opportunity. 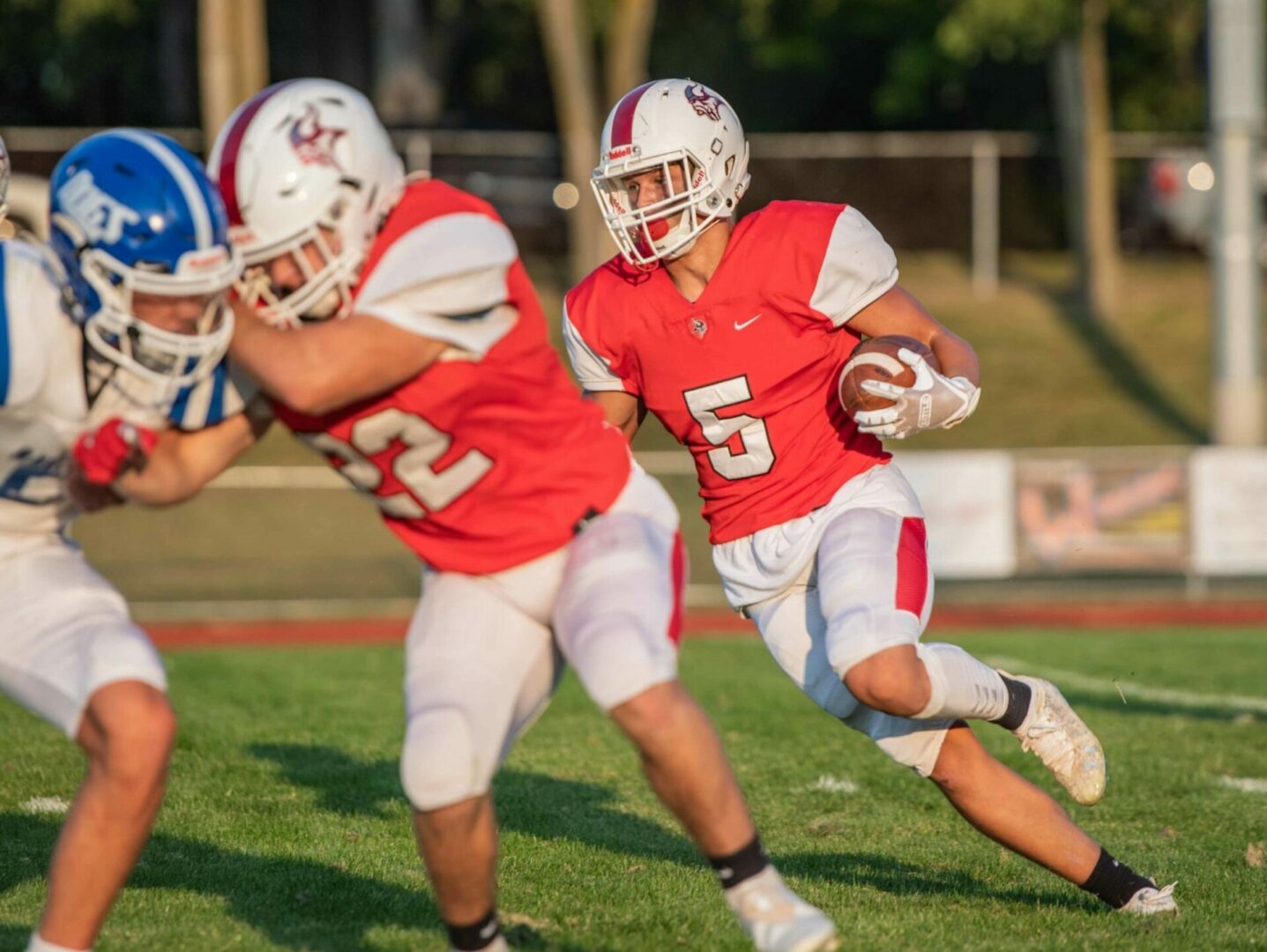 Whitehall’s Jaiden Altgibers cuts up-field to pick up a first down. Photo/Eric Sturr

Whitehall’s Stratton then used his legs to damage the Ravenna defense again, this time with a 21-yard run down to the Bulldogs’ five yard line. Preutt then found the end zone to finish off Ravenna.

The strong offensive attack for Whitehall was led on the line by senior Gabe Reavey and Junior Wesley Russell.

“The o-line was very dominant,” said Sigmon. “The amount of carry Pruitt had was crazy to me because it seemed like he was getting 10 yards a run.

“I am happy with the improvement from our team,” said Sigmon. “Special teams played solid too and not missing our PATs was important for us.”

Jaiden Altgilbers and Max Brown led the Whitehall defense with 5 tackles each.

Kyle Beebe paced the Bulldogs rushing attack with 40 yards and had 65 passing yards. Drew Mabrito also hauled in two passes for 33 yards and had four tackles, one tackle for loss. 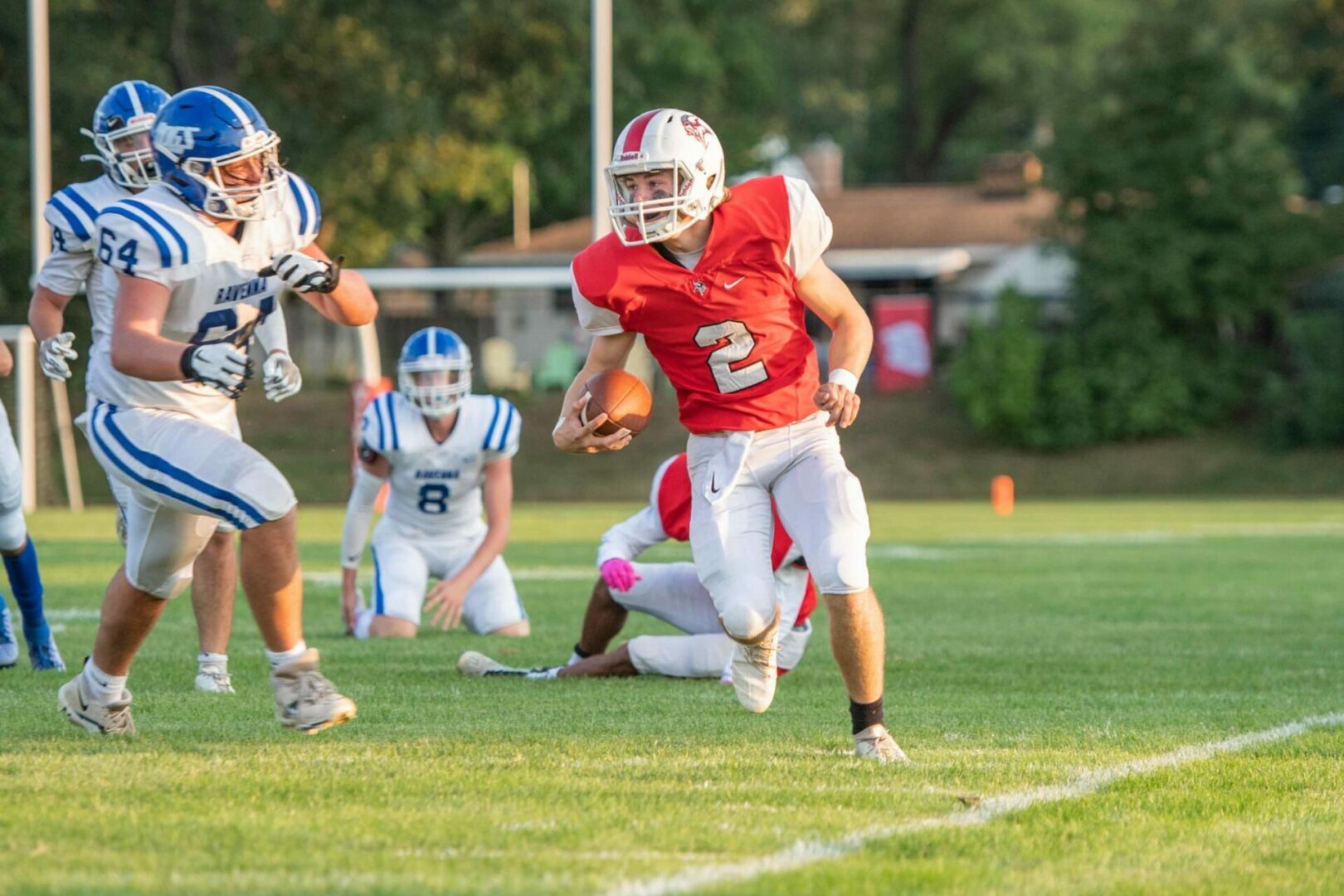 Kyle Stratton picks up a Viking fumble and scampers to the outside for positive yardage. Photo/Eric Sturr 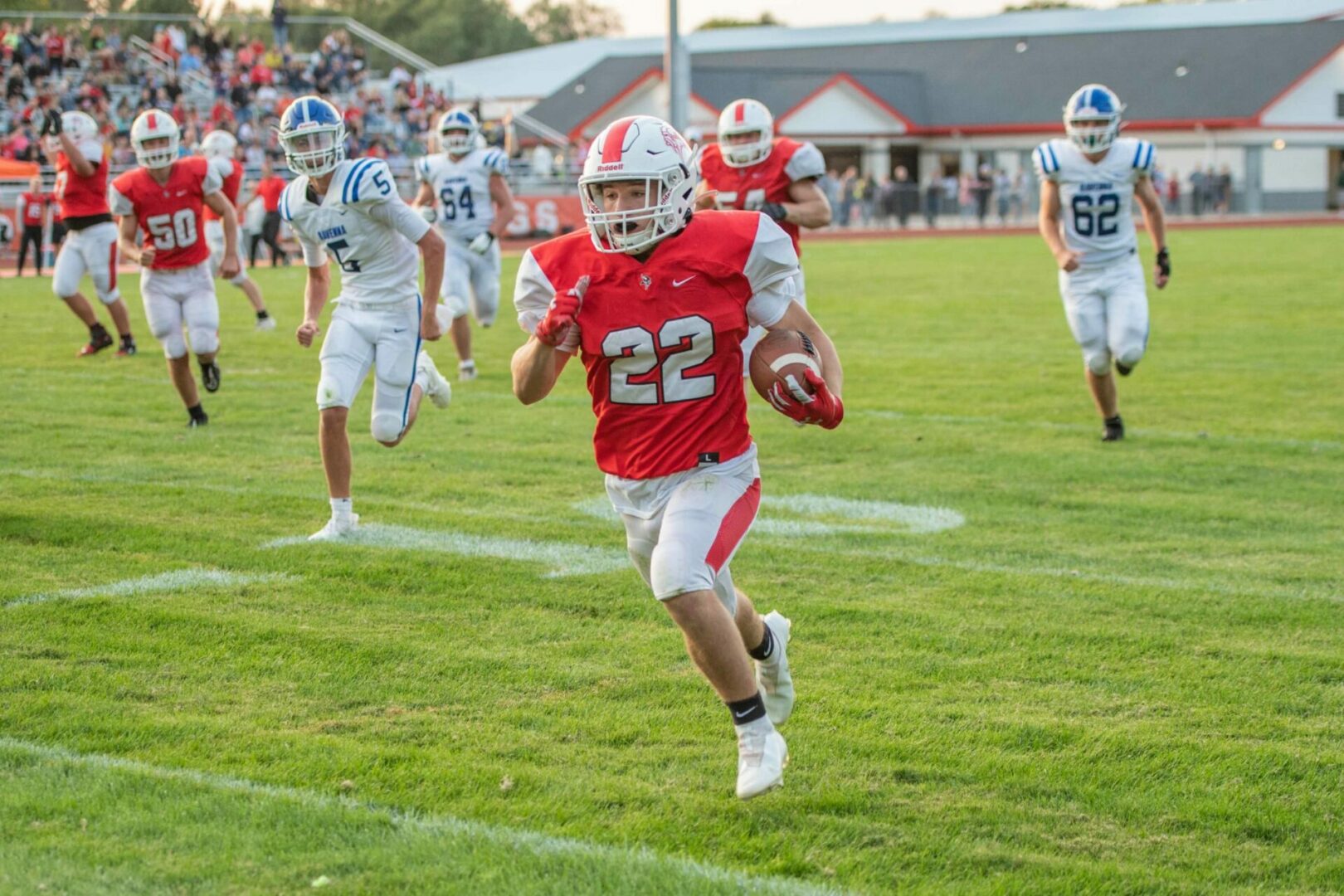 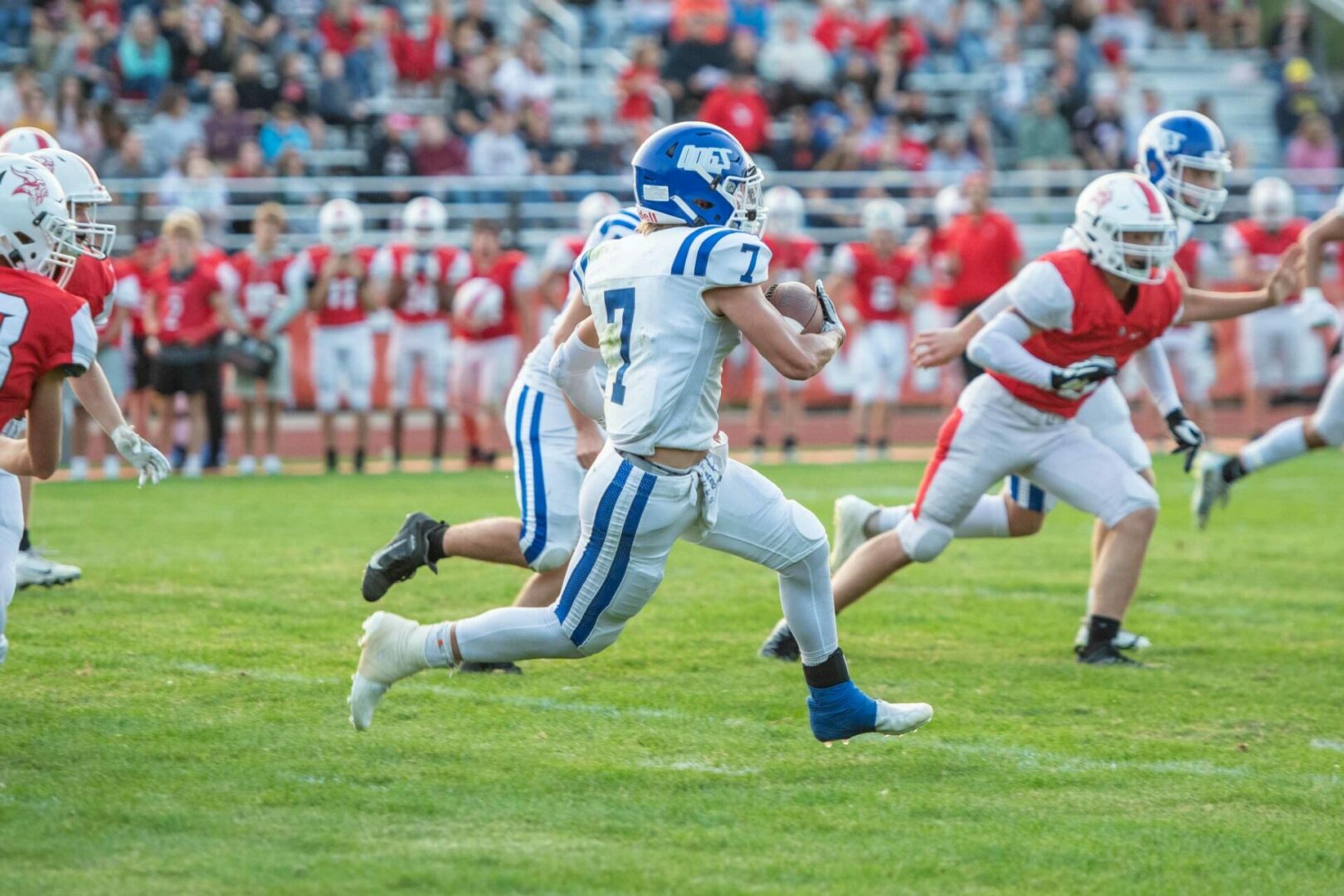 Ravenna’s Hunter Hogan breaks into the secondary and picks up a Bulldog first down. Photo/Eric Sturr 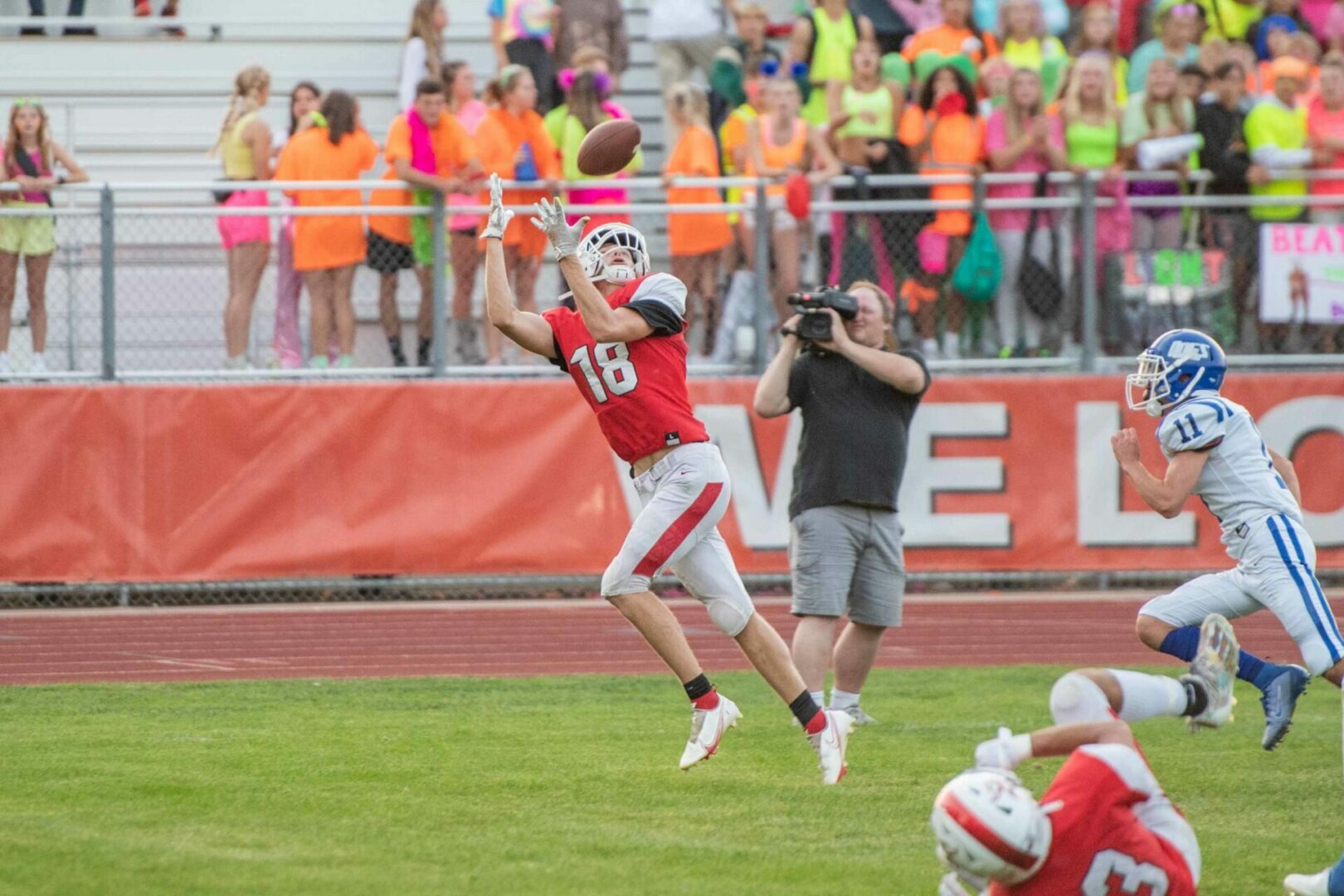 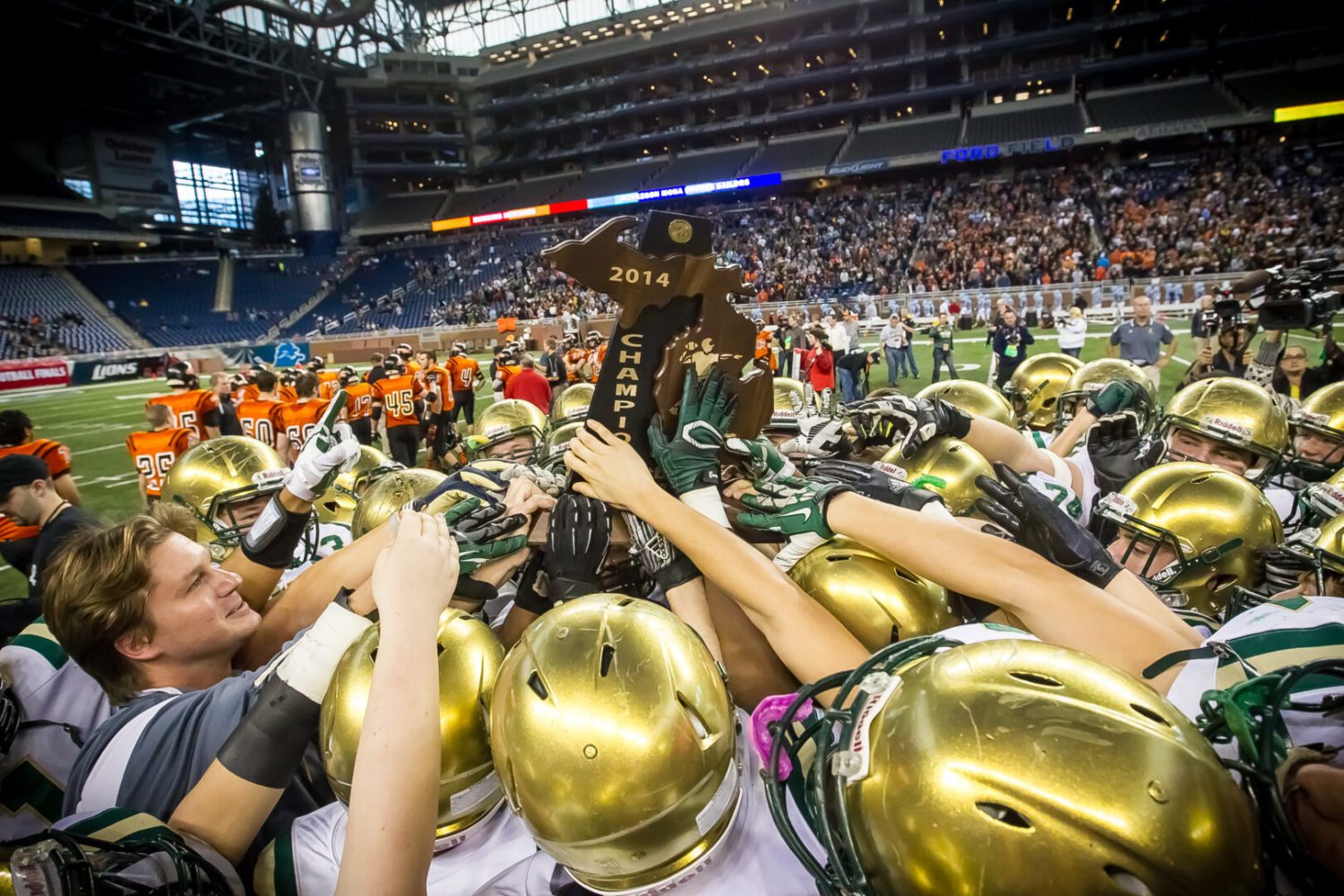