Social media was buzzing over the weekend as youth football games involving premier programs around the City of Muskegon came together to showcase area talent. 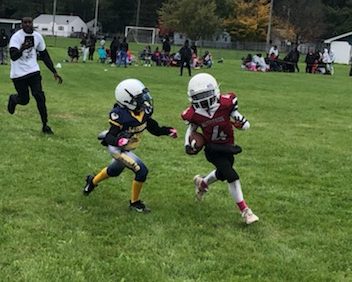 No. 4 Alijah Sydney rushes the ball for the game winning TD in the 9u game. Photo/Melvin Lane

The Muskegon Elite Youth Program hosted local teams from Port City and Lakeside, programs who have been a stable in the community.

In the three game clash, fans got a glimpse of future talent to keep an eye on.

In Game One, the Port City Lil Reds defeated Muskegon Elite 7U, 30-0.

Game Two was a defensive battle with Muskegon Elite 9U defeating the Lakeside Steelers, 6-0, in overtime.

In the fourth quarter, Lakeside DB AJ Bradford intercepted a Michigan Elite pass giving his team the opportunity to break open the 0-0 tie with less than 2 minutes remaining in regulation. 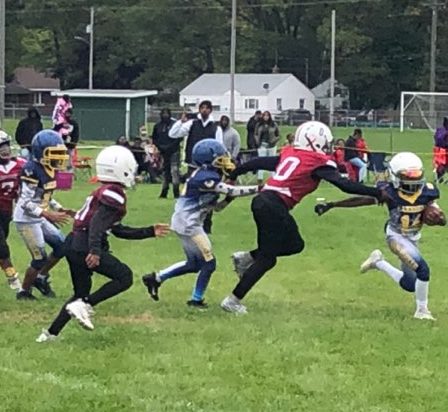 No. 14 Michael Holland rushes the ball for Lakeside. Photo/Melvin Lane

Lakeside quarterback Michael Holland, an athletic runner, got a first down but the Michigan Elite defense was held tight by a Nathan Rowan tackle in the last play of regulation.

In the overtime period, Muskegon Elite’s Alijah Sydnor found the end zone around the left end for a 5-yard TD score.  Charlie Harthron set up the play with a key defensive tackle to stop Lakeside on its first possession in OT.

The final game of the afternoon was an 8-6 win for the Port City Cats over Muskegon Elite 12U.

Callahan Millis gave Muskegon Elite a 6-0 lead in the first quarter, showcasing his elusiveness and speed during the touchdown run.

Port City responded in the third quarter with a JJ Stokes touchdown reception from quarterback Eli Totten. The Cats took the 8-6 lead with a successful 2-point conversion on a Totten run.

With both defenses holding through the fourth quarter, the Cats’ Meikhi Longmire recovered a Muskegon Elite fumble on its final possession that reached striking distance of the end zone.

Port City was able to run out the clock behind Vic Clay and tough yards from Kevin Washington.

Check out highlights from the Muskegon Elite 12U and Port City Cats matchup shot by Clinton Walker.