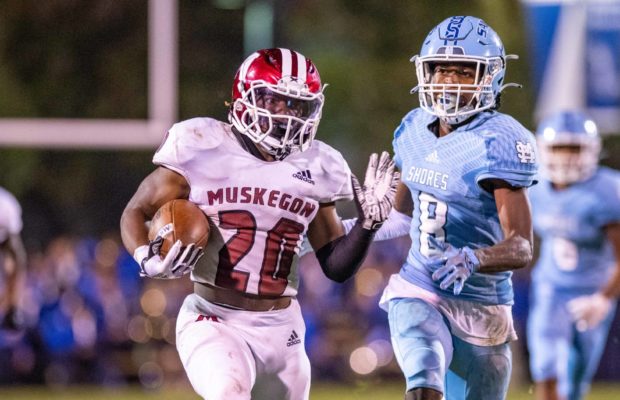 It’s hard to imagine that many of the 875 football victories in the history of Muskegon High School were much sweeter than the one on Friday night.

Muskegon traveled across town to rival Mona Shores as the underdog and made a resounding statement, unleashing a lethal, quick-strike running game and sprinting away from the host Sailors, 49-28, in front of more than 6,000 fans at Sailor Stadium.

In a back-and-forth game in the first half, it was the Big Reds who made the better adjustments at halftime, using a 22-7 scoring edge in the second half to turn a slim 27-21 halftime lead into a runaway.

The Sailors focused their defense on slowing down senior quarterback Myles Walton, but it turned out to be two lightning-fast sophomores who stole the show.

Jakob Price, a diminutive 5-foot-7 and 165 pounds, showed next level speed on touchdown runs of 70 yards in the second quarter and 99 yards in the third quarter. He finished with a game-high 217 yards on six carries, an average of 36 yards per attempt.

Destin Piggee, even smaller at 5-6 and 160 pounds, contributed as both a runner and a receiver. Piggee rushed six times for 123 yards and two touchdowns and caught two passes for 71 yards and another score.

“Jake and Destin, man, those two sophomores are electrifying,” said Muskegon coach Shane Fairfield. “They are the best kids and the best teammates. They are a joy to be around at practice and they are so loving and caring of other people around them and then you see what happens on Friday night.”

Price said all of the news outlets which predicted a Shores victory helped motivate and focus his team.

Muskegon’s Jakob Price splits the Mona Shores defense and takes it to the endzone for a Big Reds touchdown. Photo/Eric Sturr

“We love it when they pick against us,” said Price, part of a loaded sophomore class at Muskegon. “You saw tonight what happens when you pick against the Big Reds.”

Mona Shores tried to hang in the game behind the arm and the legs of senior quarterback Mark Konecny, who scampered 11 yards for a touchdown as the hosts took a 21-14 lead with 4:21 remaining in the first half.

At that point, it appeared that it was going to be another classic, back-and-forth game like many in the recent rivalry, but 12th-year coach Shane Fairfield and his Big Reds had other plans.

Muskegon, which ranks sixth in the nation with 875 football victories, scored the next five touchdowns in a row – 32 points in a row – to basically put the game away before the fourth quarter even started.

The Big Reds scored the final points of the first half on a 37-yard pass from Walton to Piggee, then took the halftime lead on a controversial 80-yard fumble return by senior Damari Foster. Konecny had just hit Jaylen Vinton on a seam route for a first down, but he fumbled (the Mona Shores coaches thought he was down) and Foster scooped it and sprinted along the Muskegon sideline for the touchdown and his team never trailed again.

Muskegon received the second-half kickoff and, after a 48-yard run by Price, punched it in on an 8-yard run by Foster.

Mona Shores was still very much in the game at that time, trailing 33-21, when a key series of events midway through the third quarter completely changed the complexion of the game.

Mona Shores QB Mark Konecny launches a pass just as he is about to take a hit. Photo/Eric Sturr

The Sailors drove the ball to the 1-yard line, but Elijah Johnson was stopped inches short of the goal line on fourth down. On the very next play, Price broke through the right side of the line of scrimmage, using blocks from freshman guard Robert Mills and senior tackle Jamarrius Dickerson, and raced 99 yards to the opposite end zone for the dagger.

The final points for Muskegon came on a 57-yard run by Piggee and a 37-yard field goal by sophomore Adrian Ramos-Velazquez.

A look at the team rushing statistics shows the story of the game.

Walton did just enough through the air, completing 3-of-8 passes for 113 yards and one touchdown, to keep the Sailors’ defense honest.

“Our offense is explosive,” said Fairfield, who has a new offensive coordinator this fall in Montrell Dockery. “I am very excited with who they are and how they play.”

Konecny did his best to keep it close, completing 16-of-27 passes for 215 yards, with one touchdown and one interception. He was also the only Shores runner with more than 33 rushing yards, finishing with 21 carries for 121 yards and three touchdowns.

Ryan McNiff caught five passes for 81 yards and Demetri Roberson had three catches for 77 yards and one touchdown.

Muskegon, which improved to 6-1 and has now won five games in a row, closes out the regular season at Reeths-Puffer next week and then home against Zeeland East.

Mona Shores, which dropped to 5-2, plays at Holland and then is home against Wyoming.

The two schools will play in different divisions in the playoffs, with Shores in Division 2 and Muskegon in Division 3. The silver lining for the Sailors is that, back in 2019, Muskegon handed them a humiliating 53-0 home loss, but both teams ended up making playoff runs all the way to Ford Field.