The Eagles pulled out a narrow 31-34 victory in the CSAA Silver Championships in an event hosted by Lakeview.

It wasn’t so close for the Eagles’ girls who ran away with the meet. Kent City put up 20 points to runner-up Morley-Stanwood, which had 79. White Cloud was third, followed by Holton, Lakeview and Hesperia.

Following behind the top two teams for the boys were Morley-Stanwood, Hesperia, Holton and Lakeview. 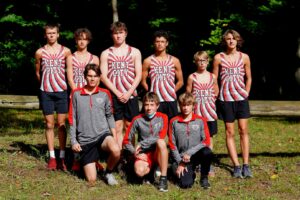 The Eagle girls didn’t get the top spot individually, but captured the next six places.