It is not easy taking a loss as a win. But the Muskegon Lumberjacks were able to do that on Saturday night.

The Lumberjacks hosted Dubuque for the second night of a two-game series at Mercy Health Arena and needed to break a 4-game losing streak. 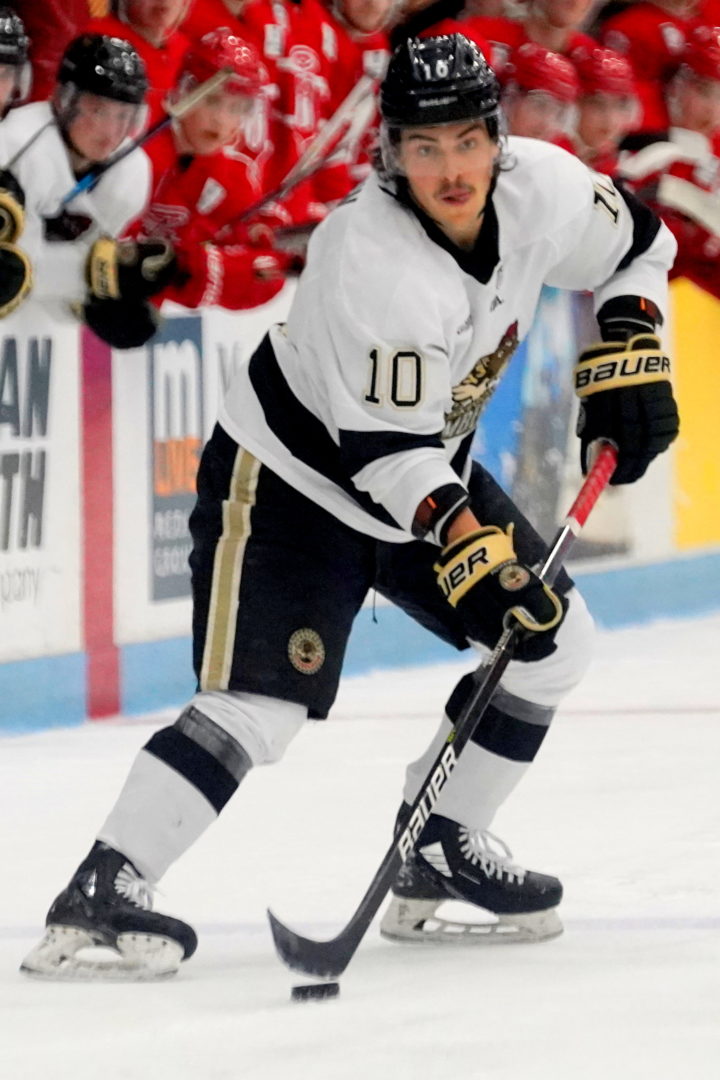 While Muskegon walked away with a 4-3 shootout loss to the third-place Fighting Saints, it was able to gain an ultra important point in the young season.

Every point is valuable for any talented team that is struggling early on like Muskegon (1-6-1-2). Those points will come in handy when the playoffs approach down the line.

But on Saturday night, it was an early regular season game and the Jacks looked a lot more inspired.

The team needed pep in its skates after taking three ugly losses in a row.

First it was a loss last week Friday in Madison when the Jacks let in four goals in the last 10 minutes of a 6-3 loss. The following night, it was five first-period goals. And last night, it was seven goals stuffed in on new talented russian goalie, Platon Zadorozhny, who deserved a lot more support.

But thankfully, that type of play looks to be behind this team.

The Lumberjacks have been shaking up their roster and bringing in new talent the past two weeks.

Jacob Braccini was shipped in from Fargo a couple weeks ago and the left-handed forward came through with a goal that put Muskegon up 2-1 in the second period. 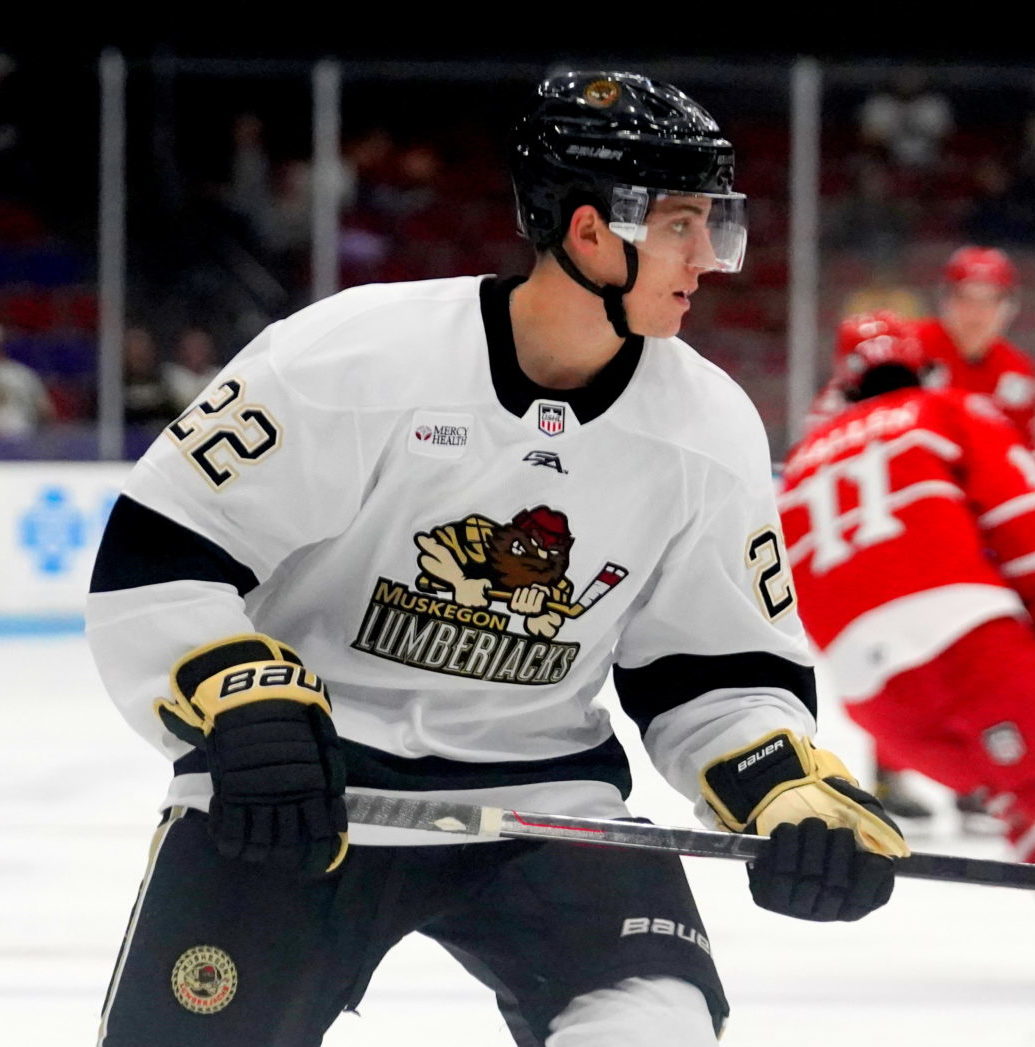 Parker Lindauer came to Muskegon from Tri-City this past week. Photo/Leo Valdez

“Braccini scored a goal tonight and he’s been with us for a couple of weeks and it’s nice to see him get going,” said Muskegon Coach Mike Hamilton about the forward’s goal on Saturday.

Parker Lindauer was also brought in this past week and the Madison, WI native came through with an assist on Saturday. Unfortunately for Lindauer, a puck caught him in the jaw during the third period and he was escorted off the ice but was confirmed to be ok.

“He’s ok, he took a puck to the jaw and we took some precautionary stuff to make sure he’s ok,” said Hamilton about Lindauer’s mishap. “I thought he (Lindauer) was good and there’s a lot of things moving in the right direction.”

The team is seeing new faces step up and that keeps the guys accountable and focused that they can also produce.

Jacob Guevin increased his point streak to eight games. The Omaha commit grabbed an assist on the night and looks to be continuing where he left off after last season’s 45-point performance.

“It’s fun to see guys get a point and get rewarded for their hard work,” said Hamilton after commenting on some of the key point getters.

The bad news for the Lumberjacks is the discipline is still lacking, starting with a penalty in the first 70 seconds of the game. 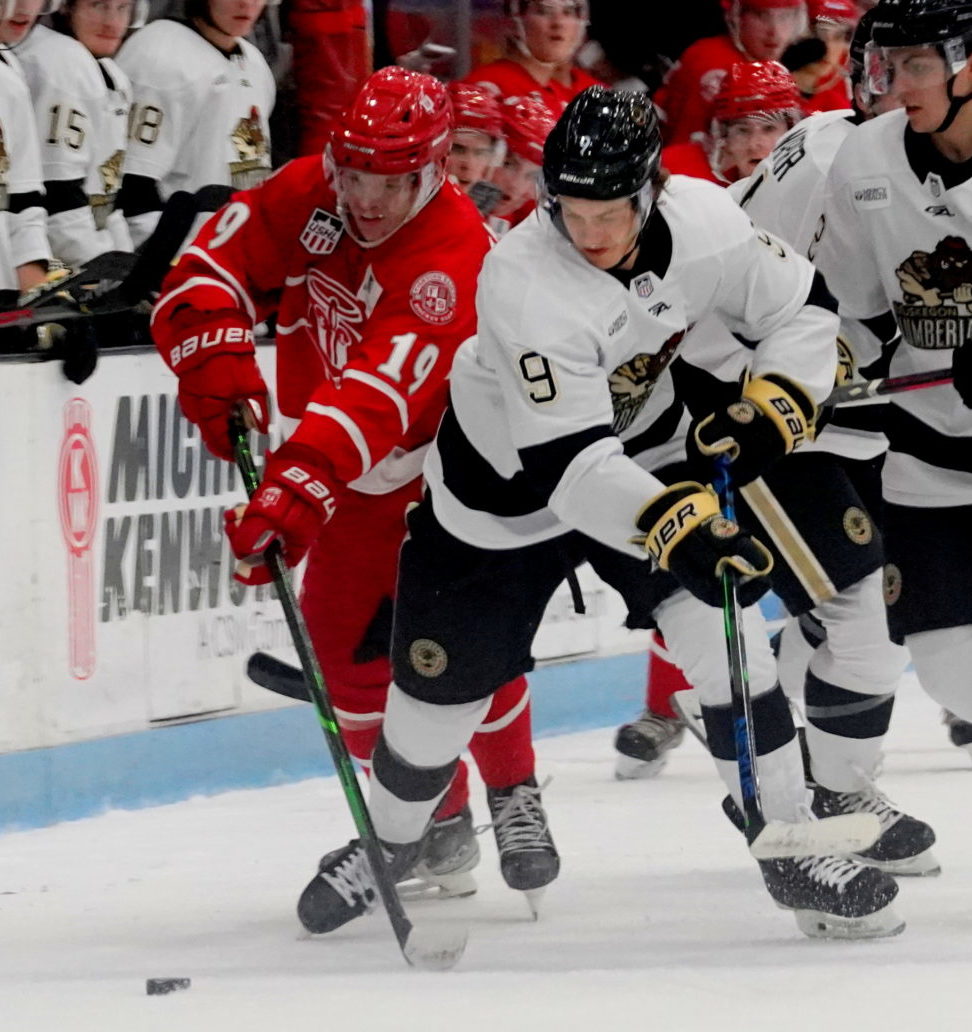 Muskegon’s No. 9 Joey Larson battles for the puck along the boards. Photo/Leo Valdez

“It’s kind of our thing right now,” said Hamilton about his team’s weakness on giving up unneeded penalties. “We’re not getting those little things done and making those little mistakes. Our frustration will be there if we allow it, but we got to kill off those penalties.”

The Jacks led 1-0 after the first-period, getting the first of Tyler Hotson’s two goals.

But Muskegon finished the period with a penalty and that enabled Fargo to tie the score 1-1, 35 seconds into the second period.

Muskegon then built a 3-1 lead eight minutes later in the second period, but a too many men on the ice penalty, enabled Dubuque to strike and trail 3-2.

Briccini gave Muskegon a 2-1 lead on an exciting breakaway that was set up with a through-pass from Lindauer.

Just over a minute later, Hotson found the net for the second time of the night on a nifty setup by Guevin who faked a shot in front of the Dubuque net, skated right, and sent a pass to the front of the net.

All in all, Muskegon looks to be shaking off the early season bug.

The Jacks will look to keep the bounce in the right direction next weekend, when they host Youngstown on November 5 and 6. 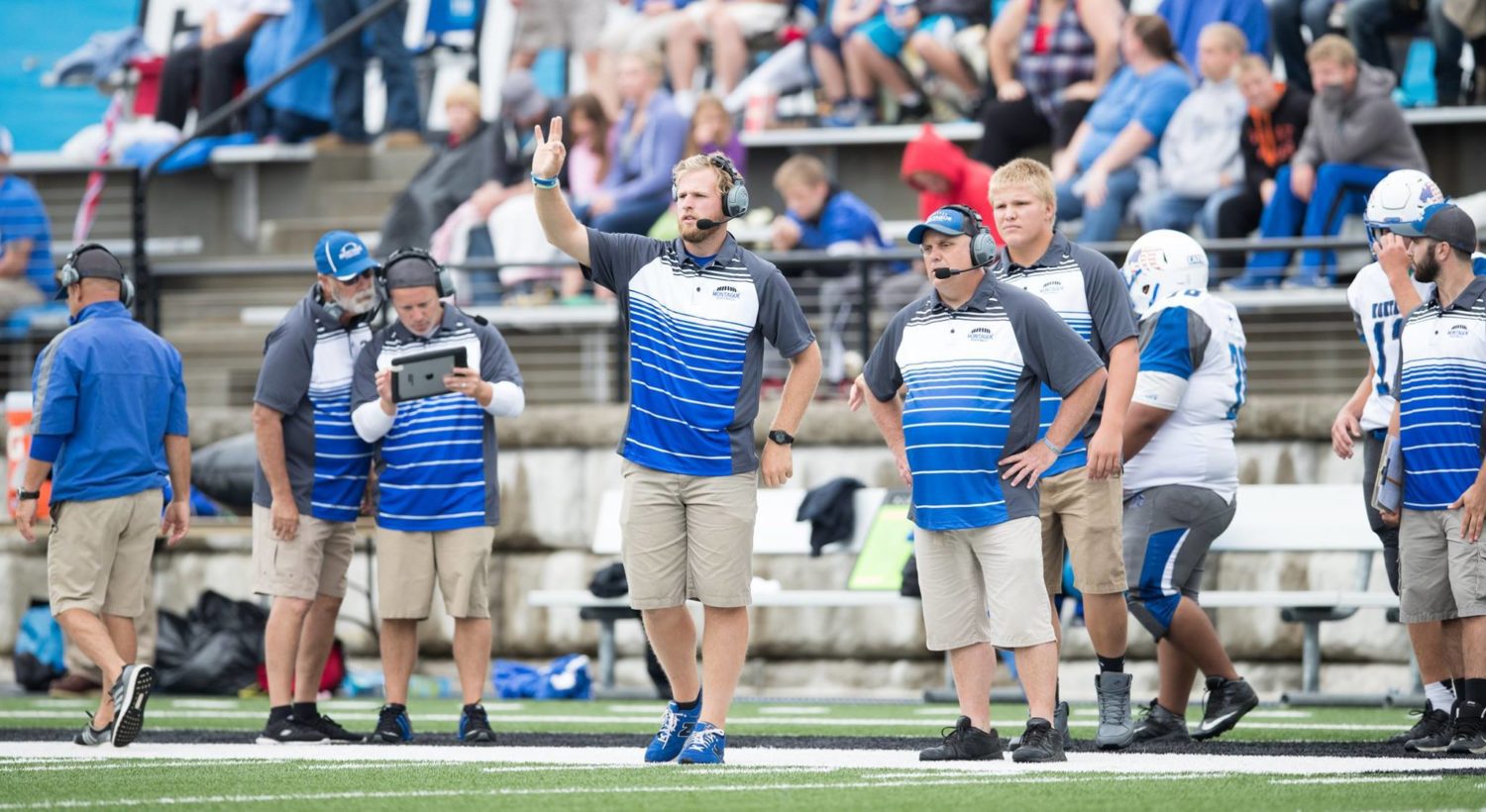