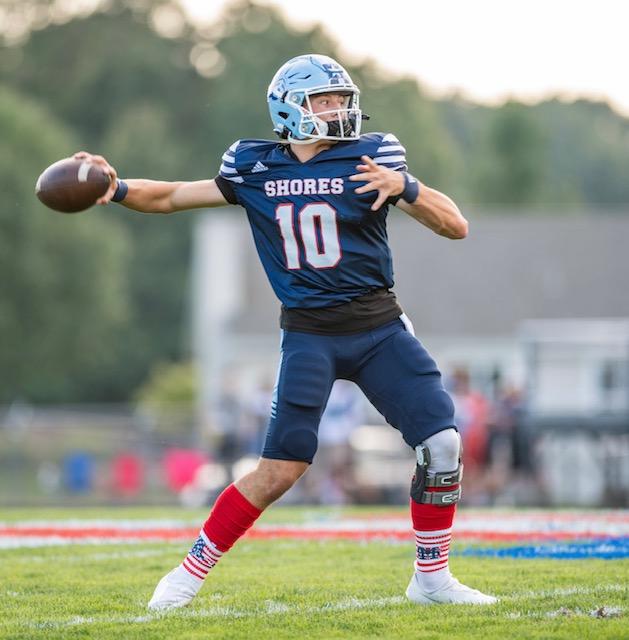 Thomas Wolfe wrote his most famous novel, “You Can’t Go Home Again” more than 80 years ago, warning that people tend to look at the past in an overly nostalgic light – and that things will never be quite as good or pure as you remember them.

Mark Konecny and his son – same name – have together proven Wolfe’s theory wrong since moving back to Muskegon from Colorado in 2017, coming home and loving life and football at Mona Shores.

Mark Konecny (the dad) was a star quarterback for Shores in the late 1970s and his senior year in 1980, who went on to Alma College and then became the first Michigan Intercollegiate Athletic Association player to make it to the NFL, playing for the Miami Dolphins and the Philadelphia Eagles.

Mark Konecny (the son) was the backup quarterback to state player of the year Brady Rose and a key contributor to the state championship team last fall, who now has assumed the starring role as the Sailors pursue a Division 2 state championship “three-peat.” 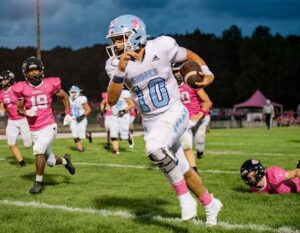 This season, Konecny started off the Sailors’ drive for another title with a bang, connecting with fellow senior Demetri Roberson for a 94-yard touchdown at Lowell on his first pass of the season.

Konecny’s ability to throw and run equally well has kept defenses off balance, as the Sailors have averaged more than 45 points per game – amassing 270 yards per game on the ground and 140 yards through the air.

In his first home varsity start against Zeeland West on Sept. 17, Konecny connected on 11-of-15 passes for 166 yards and two touchdowns and rushed six times for 54 yards and three touchdowns in a 47-12 victory. Even in losses to Detroit King and Muskegon, Konecny and the offense have shined, never scoring less than three offensive touchdowns in any game.

He savors the title runs of the past 2 years and hopes for one more, as his dad never competed in a playoff game. Shores first qualified for the playoffs in 2013.

“I’ve trained over the past 6 or 7 years to become the best quarterback I can be and to be ready for the big games and the big moments,” said Konecny, a tremendous athlete who is also the Sailors’ starting shortstop in baseball. “That’s when it’s the most fun.”

Earning respect and the spotlight

The younger Konecny admits he didn’t want to leave all of his middle school friends in Colorado and move to his dad’s hometown in Michigan – where he essentially knew nobody.

“I was opposed to it at first,” Konecny said.

The whole idea of coming home again began early in 2017 (Mark’s 7th grade year), when his father was invited by Koziak to speak to his team at a fundraiser about his experience of playing at Shores and making it to the NFL. The younger Konecny then attended veer camp with Shores that summer, where he learned his style of play was a good fit for the Shores system.

“As soon as the camp was over, I came back to Muskegon and hung out with the guys a little more and started establishing friendships,” he said. “Then I was ready to move.”

Konecny played his 8th grade year in Colorado and transferred to Mona Shores Middle School after the first trimester.

His talent was apparent from the start, as he was the starting quarterback on the freshman team, which finished 7-1-1 (he overcame a broken collarbone that season, the same injury which ended his dad’s senior year in 1980). As a sophomore, he led the Shores junior varsity to an 8-1 record and saw his very first and only varsity action at quarterback that fall in the final 3 minutes of a playoff win over Midland Dow.

Things also have worked out nicely for the Konecny family off the field, as well.

After his playing days were done in the late 1980s, Konecny Sr. worked as a fireman in Littleton, Colo., for 25 years, and he was able to get a similar job back home with the Norton Shores Fire Department. His mother, Lauri, landed a kindergarten teaching job at Campbell Elementary in the Mona Shores district.

The older Konecny coached the Shores special teams during his son’s freshman and sophomore seasons, but stepped aside after the 2019 season to give his son some space and just be another dad in the stands.

“I want his final two years to be all about him and the work that he has put in,” said his father, who was inducted into the Muskegon Area Sports Hall of Fame in 2007. “I just want to be an advocate for him and do whatever I can, lend whatever knowledge or experience I can, to help him achieve his goals.”

While the name and the school and the position may be the same, Konecny and his father are completely different types of players.

Dad was faster and more ground-oriented, leading an outstanding Shores team his senior year to a rare, 20-7 win over Muskegon, before suffering a season-ending broken collarbone the following week at Traverse City.

He was quickly converted to running back at Alma, where he became the first in school history to rush for more than 1,000 in a season with 1,059 yards in 1984, earning all-MIAA honors. He played two years in the Canadian Football League, before realizing his dream of playing in the NFL in 1987 and 1988.

Konecny first made it in the big leagues as a member of the Miami Dolphins in 1987, but his best NFL season came with the Philadelphia Eagles in 1988, when he returned 17 kickoffs for 276 yards and 32 punts for 226 yards.

His son is physically bigger and stronger, evidenced when he became a rare Shores junior skilled athlete to make the 1,000-pound club, meaning his combined best in the bench, squat and deadlift totaled more than 1,000 pounds. He also possesses a rocket arm and is being recruited solely as a quarterback. His first offers came from Lawrence Tech and Morehead State early this season, and others have been rolling in for the 3.92 GPA student.

Ironically, the year that he might have made the biggest impression of all on scouts and his teammates was last fall – when he played very little quarterback as Rose’s backup. He proved his toughness in a variety of other roles (starting several games at outside linebacker) and displayed his team-first mentality by graciously accepting his backup quarterback role.

“We want to get our best players on the field, but there can only be one quarterback, so it’s kind of a problem,” Shores coach Matt Koziak explained last fall. “One of the things I really like about Mark is that he has a very inquisitive football mind. He wants to know why we do certain things we do in terms of motion or blocking on a particular play – not just what he has to do, but why.”

He showed glimpses of the future in limited opportunities last year.

One of those came in the first quarter of last year’s game at Reeths-Puffer, when Konecny lined up as a slot receiver and received a backwards toss from Rose. He then fired his first-ever varsity pass, which Elijah Farnum took 59 yards for a touchdown.

Koziak said that Konecny was like a sponge the past few years – soaking in lessons from himself and offensive coordinator Aaron James about the nuances of the veer offense and working with his father and former MSU quarterback Ryan Van Dyke on the mechanics of quarterback play.

Konecny also has an incredible work ethic, never missing a chance to throw with his teammates or to hit the weight room. And when he’s not doing one of those things, he can often be spotted at his dad’s old favorite workout spot: the giant Lake Michigan sand dunes at Lake Harbor Park.

No question, having Mark Konecny back as the starting quarterback at Mona Shores more than 40 years after it happened for the first time is a feel-good story. The dad has come full circle after making it all the way to the NFL and the son feels right at home in a place he’s never been before.

There’s only one question remaining:

Will it have a storybook ending?

“I think it’s been a really good fit. I mean, we’ve won two state championships and I get along with everybody,” said Konecny. “It’s been great. We just have to keep working hard and see what happens.” 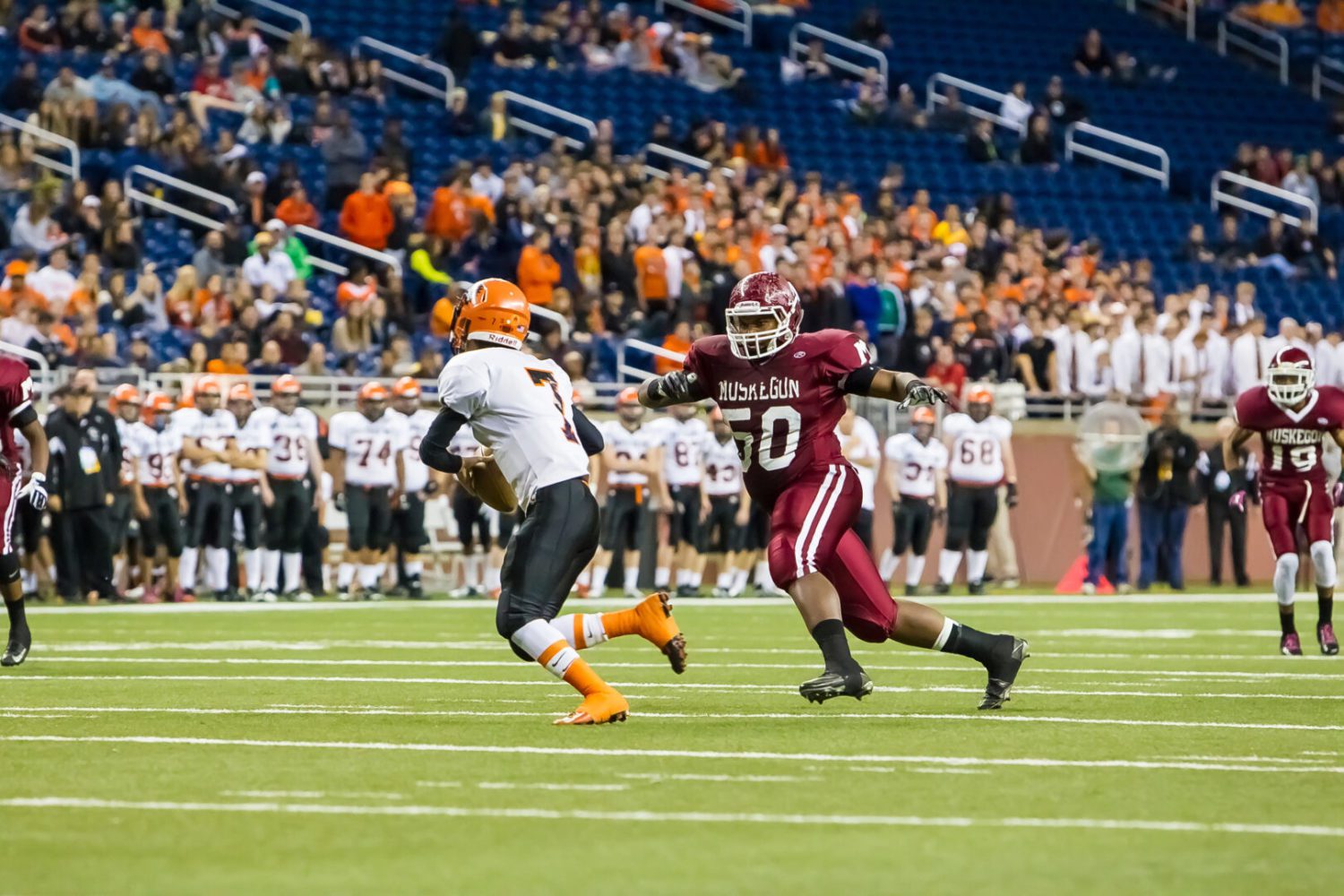