CARSON CITY — Friday night was a special night in the history of Carson City-Crystal football.

It was the first time they were hosting a district championship game and it would turn out to be the final game at Community Field before next year’s renovation. The game presented an opportunity for the Eagles to win their second district title in a row, the third in their program’s history and their first in front of the home fans.

Though it wasn’t a complete domination, CC-C’s great first-half defense put the Muskegon Heights Tigers in a big enough hole to where they ran out of time on a second-half comeback, leading to a 35-26 victory for the Eagles.

“It’s a great feeling, there’s no doubt about that,” said senior receiver Paul Wright. “I had a great game, the team had a great game but giving up that many points in the second half, that can’t happen. We’re going to come to practice and be focused and ready for next week. I’m very excited, super happy we won tonight but we’ve got work to do.”

“It’s amazing to be at home, home field is just so much better,” said junior quarterback Mason Smith. “On the road, you have to travel and get ready three hours before. We just played how we played and it felt great.”

“We have great kids and we have parents and a community that’s bought in,” said head coach Tim Swore. “You can have that and sometimes you don’t win a district championship but that doesn’t mean it’s a failure, so we’re enjoying the fruit of both.”

At the start of the game, it appeared as if it’d be another dominant performance by the Eagles, who previously beat Muskegon Heights at home on Oct. 15, 41-14.

On the very first play from scrimmage, Wright received the kickoff on a hop at his own 35-yard line. Four seconds later, he was halfway down the field without a defender in front of him. The home sideline and crowd exploded into a frenzy as Wright took it 65 yards virtually untouched for an Eagles touchdown. Following the two-point conversion by senior Cole Stone, the Eagles led 8-0.

It was then time for the CC-C defense to shine. The Eagles would force turnovers on downs for three of the first four dives by the Tigers. Even though the first two drives would get within 25 yards of the Eagles’ end zone, there was no panic by the defense, according to Wright.

“We had that bend, don’t break, mentality,” he said.

It was on Muskegon Heights’ final drive of the first half where the Eagles’ defense showed up big. Up 20-0 following rushing touchdowns by seniors Bryce Stanley and Doug Billings, the Tigers drove down the field in less than a minute to have the ball in a goal-to-go situation. Following a sack, Swore made the mistake of calling a timeout and, with 12.5 seconds left and the ball three yards from the end zone, it looked as if the Tigers would get on the board before the end of the half. With them getting the second-half kickoff, a score there would close the gap tremendously and move momentum to their sideline.

“That stop at the end, I made a really dumb choice after the sack to take a timeout,” Swore said. ‘It was not smart, it put our defense in a bad spot.”

“I told them at halftime they got me off the hook because that was a bad coaching choice,” Swore said. “We all make mistakes and one thing I try to do in front of them, when I do make a mistake I try to own it because I want them to own it.” 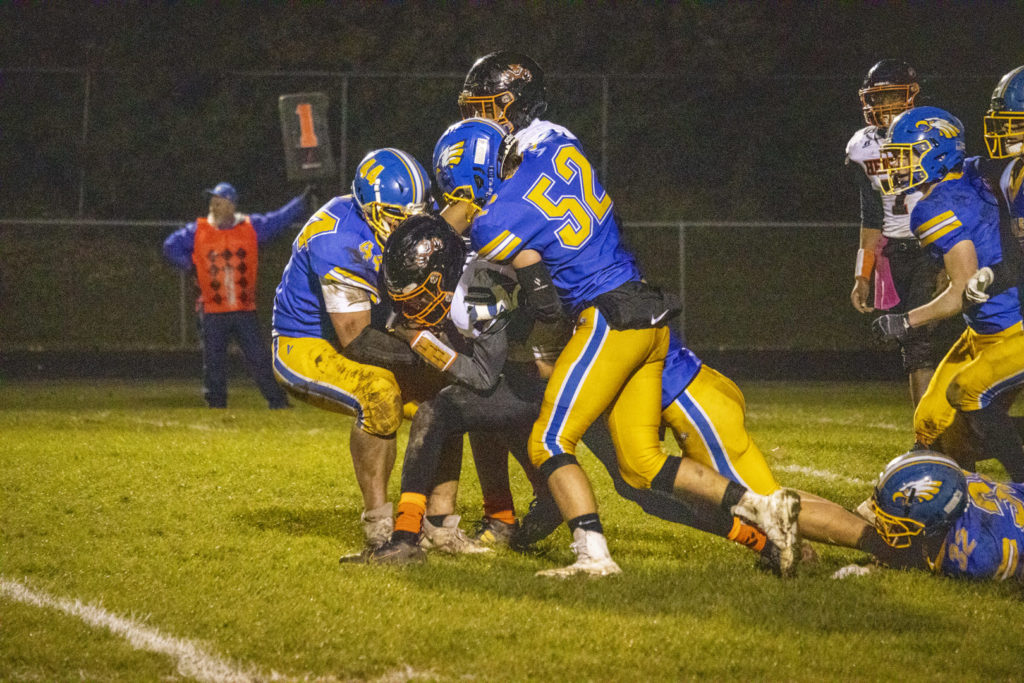 But Muskegon Heights wasn’t going away in the second half. Their first second-half drive resulted in a one-yard touchdown run by Anthony Floyd. However, CC-C would answer right back as Wright, once again, returned a kickoff for a touchdown, this time for 80 yards, making the score 28-6.

“Honestly, I can see it in my head but when it happens, your mind just goes blank and you go be an athlete,” said Wright of his kickoff returns. “The second one, I got into like three guys and one of them had my waist and I stiff-armed out of it. Returning is everything, it’s so fun. Honestly, every time I touch the ball on a kickoff, I have a chance.”

“We’ve worked hard on our return, we spent two different segments this week working on our kickoff return,” Swore added. “I said, ‘Hey, hopefully, we don’t have to do this too many times but when we do, let’s be really good at it.’”

The Tigers’ second drive of the half resulted in an interception by Stanley. However, they’d get the ball back on the very next play when they picked up a fumbled snap. The Tigers took advantage of the opportunity and scored on a 12-yard touchdown grab in the end zone by Hand Guyton to make the score 28-12.

CC-C would answer back with a touchdown, a 29-yard catch and run by Stanley, who was left wide open in the middle of the field, to make the score 35-12. But Muskegon Heights continued to work and continued the sudden shootout with a 60-yard scoring drive in 1:14, capped off by a 25-yard touchdown to Diamond Davis.

Muskegon Heights would close the gap further as they picked off a pass by Smith at midfield and scored on the first play of their drive, a 25-yard touchdown catch by Guyton, to make the score 35-26.

The Eagles would get the ball with 9:53 left in the game on their own 40-yard line. At that point, Swore needed to keep the red-hot Tigers’ offense off the field. The Eagles switched to a run-heavy package and continued to roll the clock. They’d drive the ball down to the Tigers’ goal line and would end the game on a knee as some great clock management and some timely penalties against the Tigers’ defense allowed the Eagles to run out the clock and win the game.

“They answered the bell,” Swore said of the final drive. “We’ve had a few of those drives this year in times when we needed it. To be able to do both is great, it’s important. We didn’t want a back and forth shootout, we wanted to do things to control it. I can’t say enough about our defense and what they’ve done against some really good teams this year.

“We have things we have to get better and at to their credit, they had a couple different offensive linemen on there that we were trying to put the heat on,” Swore continued. “No. 3 (Edwards) does just such a great job of avoiding the blitz and getting to the outside and we worked all week on different pursuit angles for him.”

Next week is a familiar spot for these Eagles, who now advance to the regional finals as one of eight teams left in Division 8. They’ll travel to Beal City, who beat Iron Mountain, 41-6, on Friday night. The players are confident in their abilities and are looking forward to the week of practice and the chance to bring the program its first regional title in school history.

“We’ll just go to practice, work on the fundamentals and come back next week stronger,” Wright said.

Edwards led the Tigers’ offense with 308 yards passing on 20 completions. Guyton led the receivers with 65 yards on seven catches.

The Eagles were led on offense by Smith who passed for 126 yards on nine completions and ran for 46 yards on 12 carries. Stone added 54 yards on 15 carries. Wright led receivers with 52 yards on three catches.

Whitehall cuts loose in the second half, beats North Muskegon 41-3, improves to 3-0 on the season