The Crusaders made a statement.

MCC dominated from start to finish, showing a defense and a running game reminiscent of the glory days in a 50-14 shellacking of visiting Ravenna in a Division 7 district championship game.

It’s a final score which will get the attention of teams from around the state as the Crusaders, whose 12 state titles in the playoff area is second only to Farmington Harrison, showed they might have what it takes to make a run at Title #13.

David Hill, a junior, was the star on this night, bursting through big holes up front repeatedly and showing off his speed, finishing with 18 carries for 187 yards and two touchdowns.

Senior fullback Nick Powell added 82 yards on just eight carries for MCC, which finished with 49 rushes for 385 yards – an average of almost 8 yards per carry. The defense, meanwhile, limited Ravenna to 23 rushes for 61 yards (2.6 per carry).

Lawton is located more than 75 miles from MCC, so if the two coaches cannot agree on a game time, it will be played 1 p.m. Saturday. The game will likely be played at MCC’s Kehren Stadium, although Coach Steve Czerwon said he wants to evaluate field conditions first.

He might be reluctant to move the game after the way his team dominated the rival Bulldogs.

Ravenna, which had won its last game at MCC in the 2019 Division 6 district opener, 14-0, were never able to slow down the Crusaders this time around.

The Crusaders rolled to a 20-0 lead behind the arm and legs of senior quarterback Elliot Riegler, who connected with junior Cam Willer on an 11-yard pass to open the scoring and scrambled 18 yards for another score. Sandwiched between those was a 2-yard scoring run from Hill.

The Bulldogs (7-4) finally got on the board late in the second quarter when 6-2 senior quarterback Kyle Beebe went to the air, leading his team down the field on a drive that was capped by a 1-yard plunge by Hunter Hogan, making it 20-7.

Any momentum Ravenna had disappeared quickly, as the Crusaders answered right back with a scoring drive, capped by Joe Waller’s 1-yard run to take a 26-7 halftime lead.

Ravenna had to deal with an extremely emotional week, as they learned that starting junior defensive end Keigan Swan had been diagnosed with leukemia and started chemotherapy treatments on Friday. A huge throng of Ravenna fans wore, and the Bulldog players all wore orange socks, to show their support.

MCC put the game away with 24 consecutive points in the second half as the game went to a running clock.

Waller (31 yards), Hill (36 yards) and senior Dane Rutz (5 yards) scored the Crusaders’ second-half touchdowns. Rutz, a senior, is in his third game back after missing the first eight games with a knee injury.

The Crusaders very rarely broke out of their tightly-packed, T-formation on offense, as the offensive line dominated. Leading the way up front are tight ends Sam Convertini and Sam Kartes, tackles Jaden Johnson and Alex Barnhill, guards Landon Patterson and Jack Heminger and center Easton Cook.

It was a vintage MCC performance, using many of the same basic plays and formations which date back to Roger Chiaverini in the mid-1970s – but it’s a formula that has certainly stood the test of time.

Ravenna capped the game’s scoring late on a 1-yard run by senior dive back Dayton Thomas.

Beebe completed 21-of-28 passes for 227 yards, with Grant Becklin and Hogan each grabbing six passes. Hogan was also his team’s leading rusher with seven carries for 36 yards. Seniors Brandon McFarren and Brady Stock each made six tackles.

The Crusaders won four consecutive Division 8 state championships from 2013 to 2016, but have not advanced past districts since then – until Friday night.

MCC, which has 116 students and would compete in Division 8, is in a cooperative agreement with Western Michigan Christian, which has 243 students. The combined enrollment of 359 makes MCC a Division 7 school for football.

Check out photos from the Crusaders’ win, shot by Tim Reilly 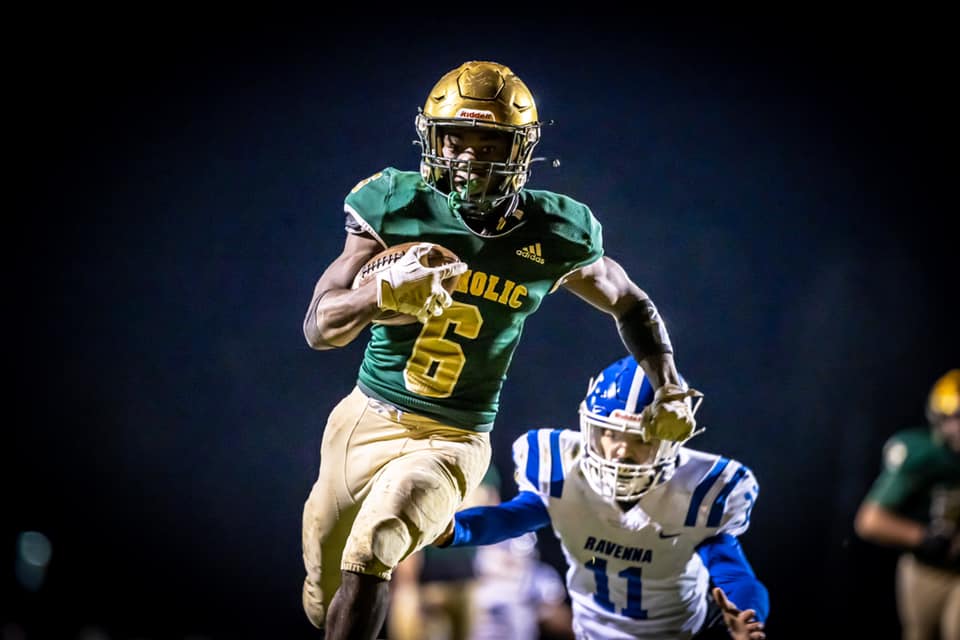 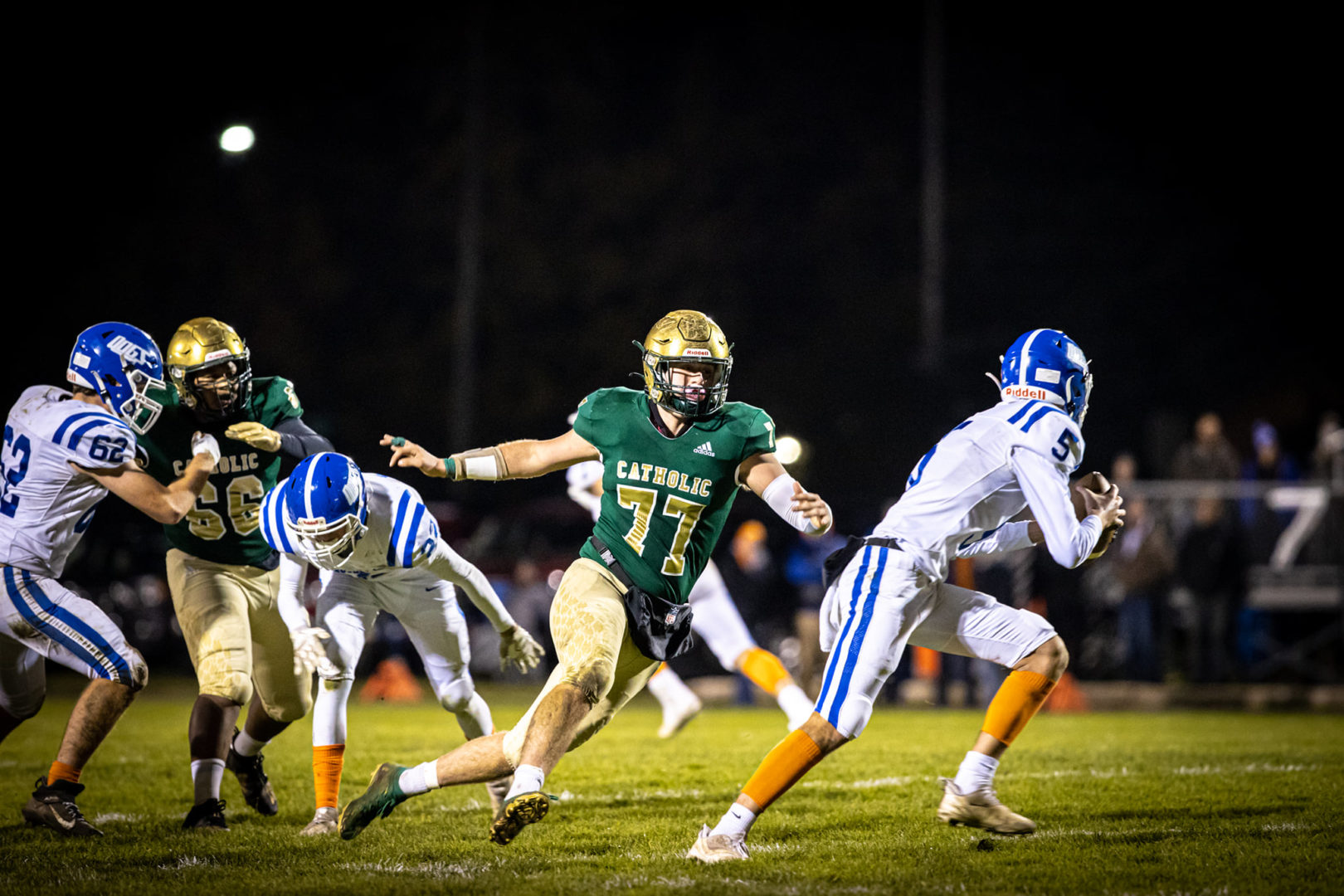 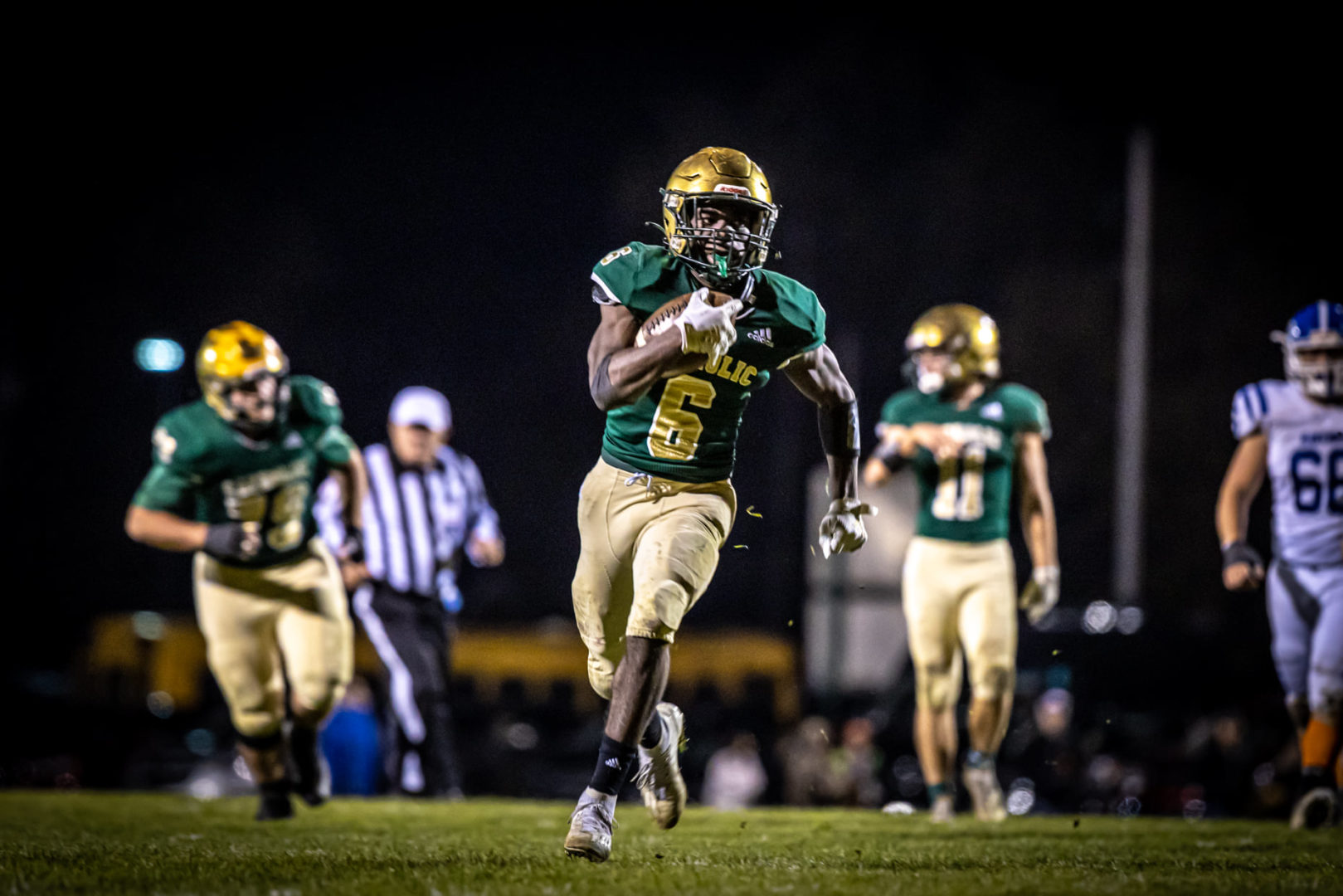 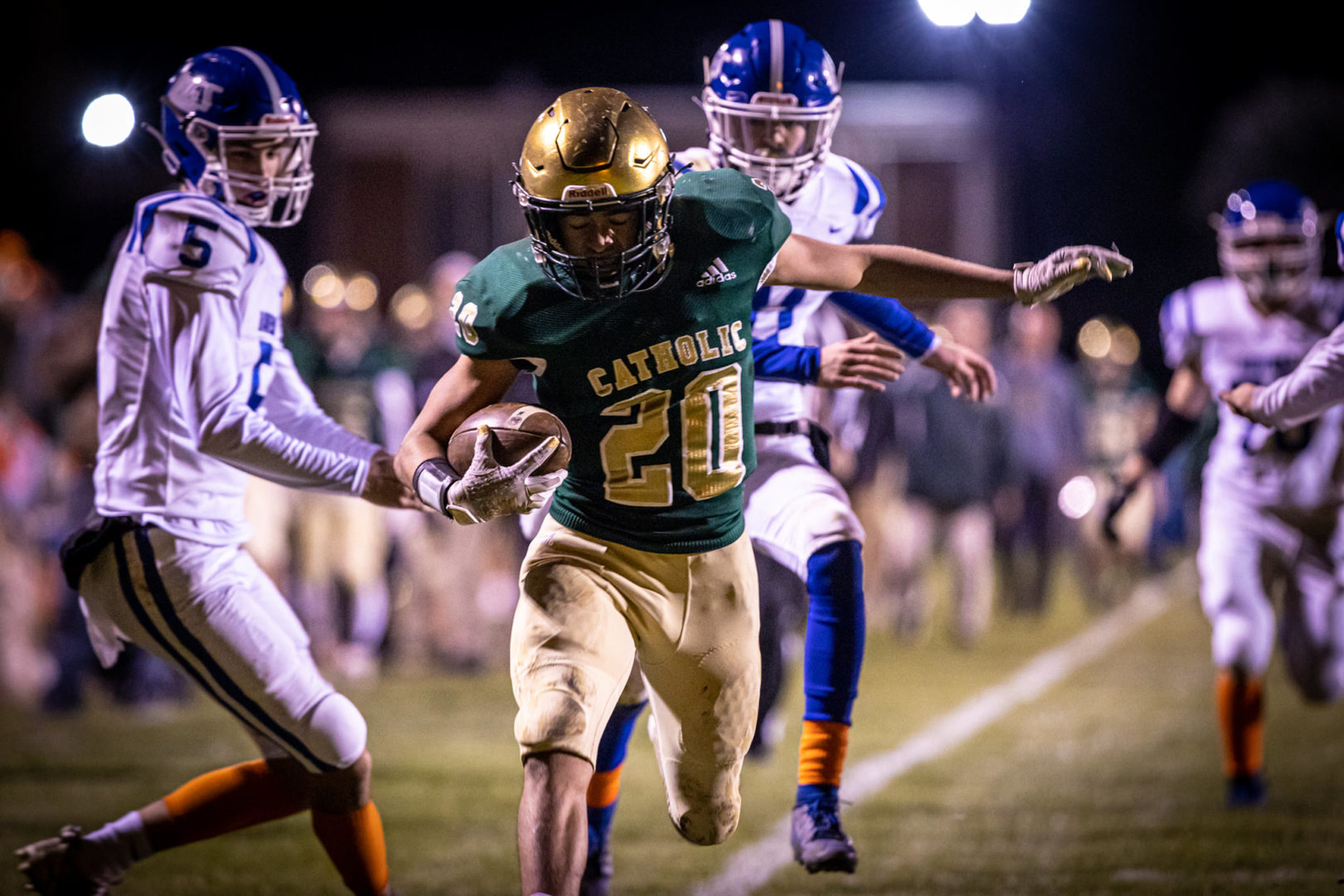 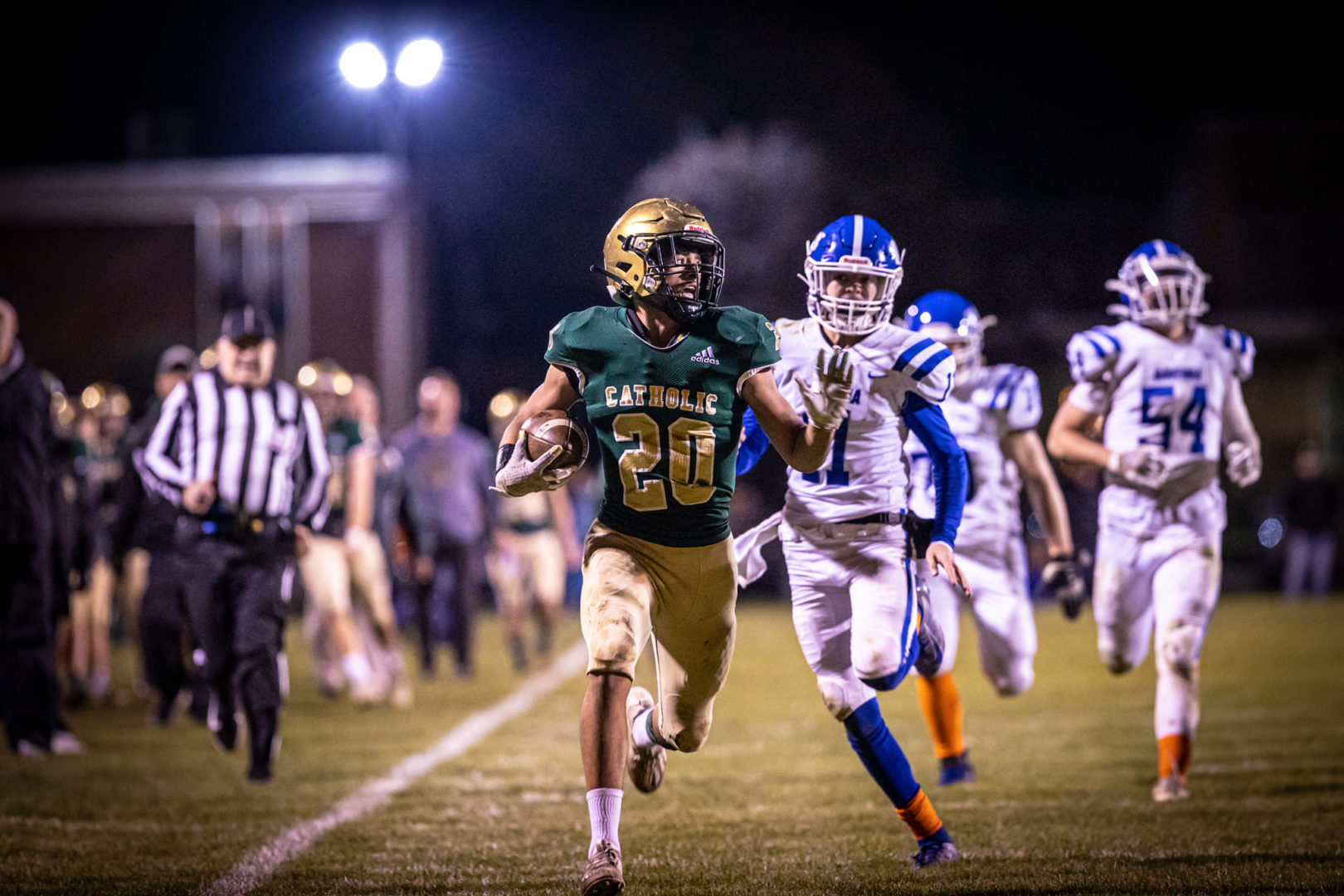 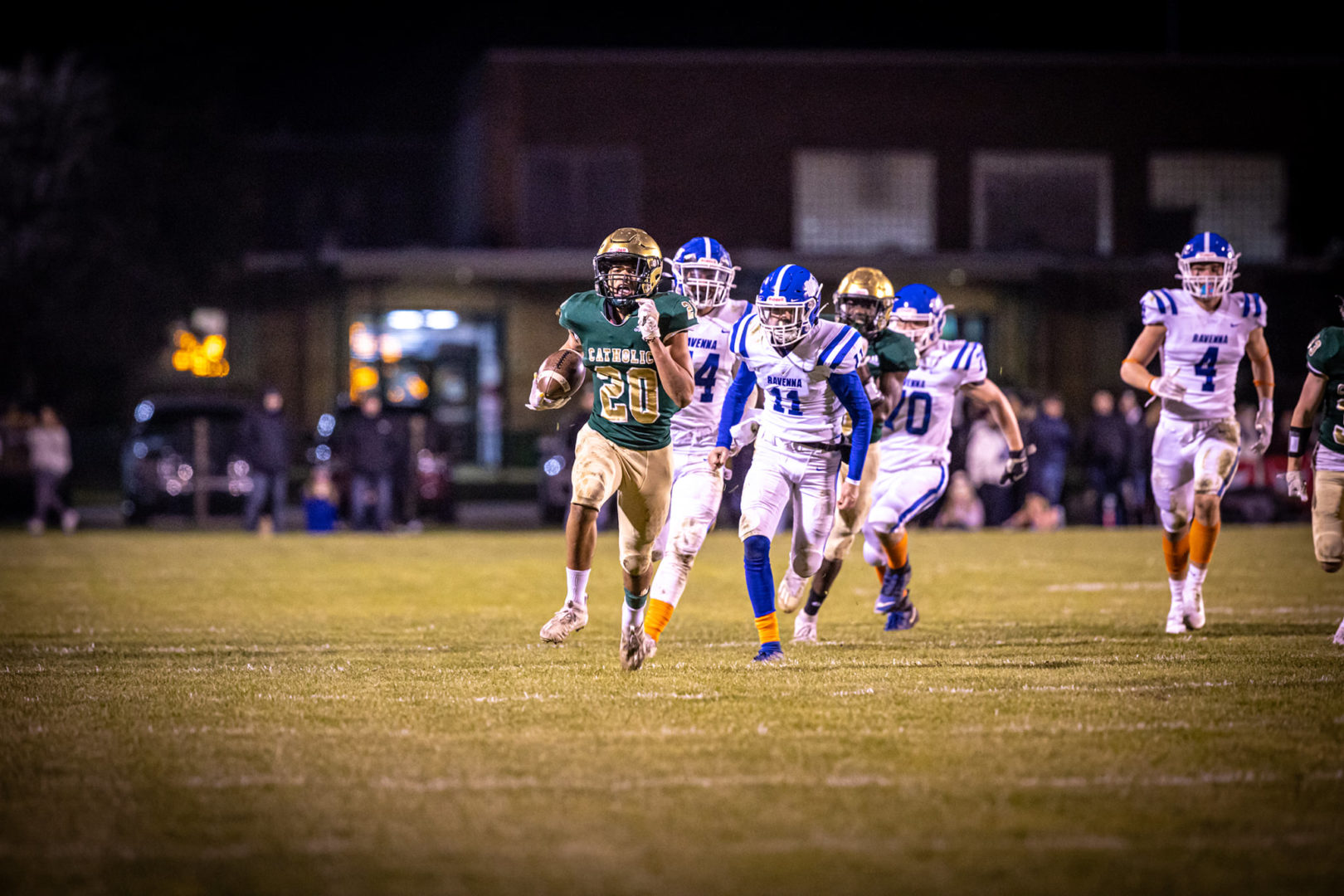 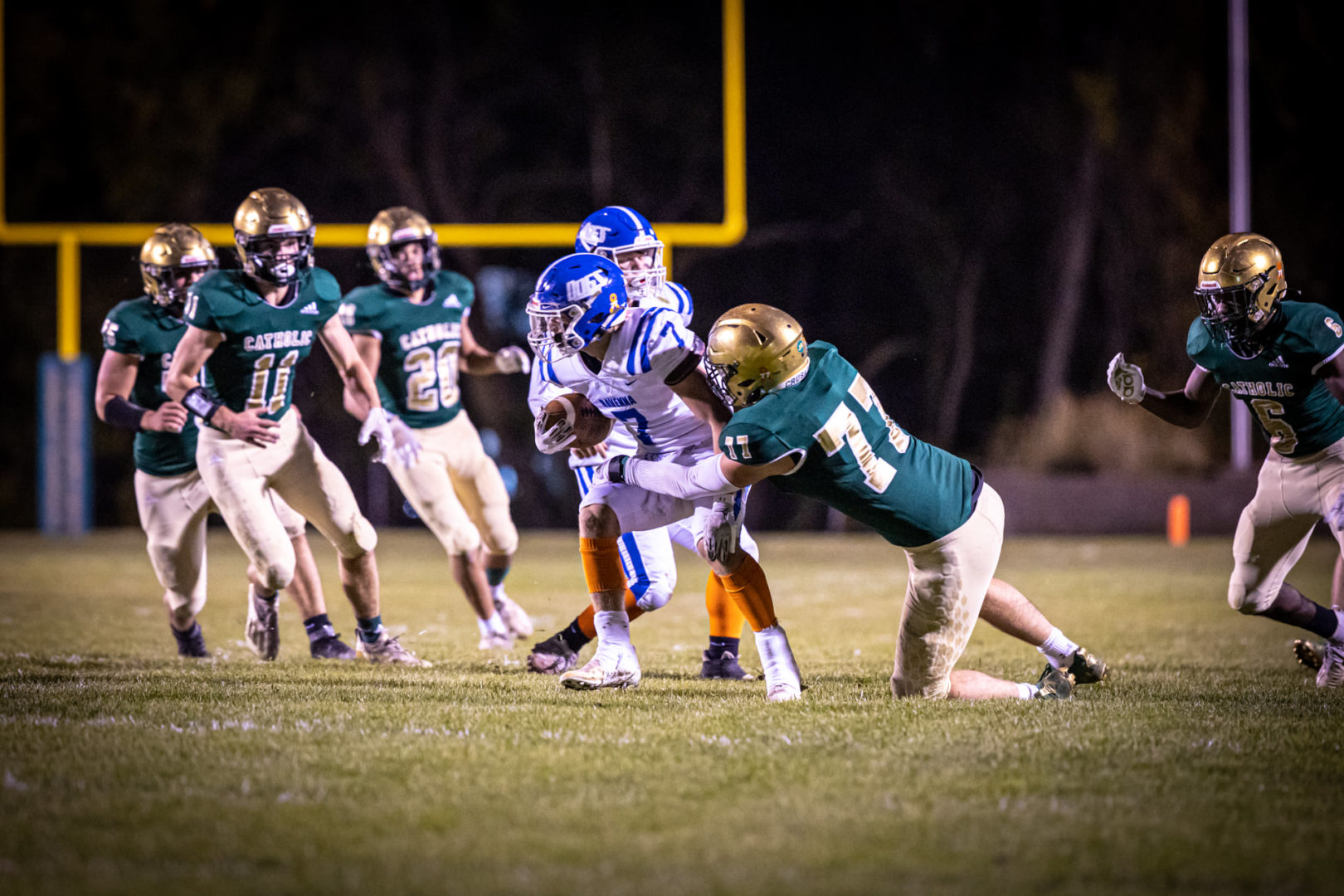 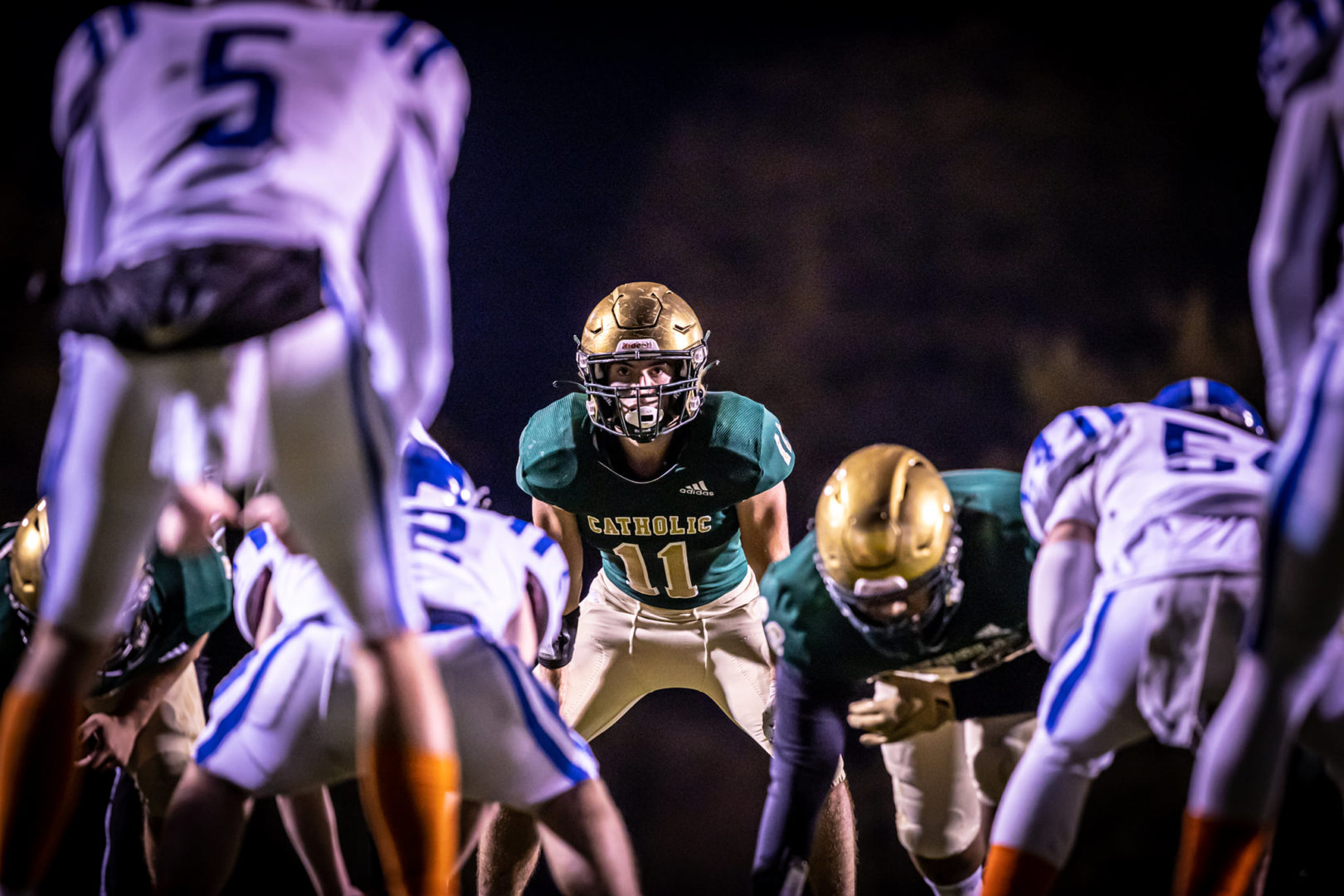 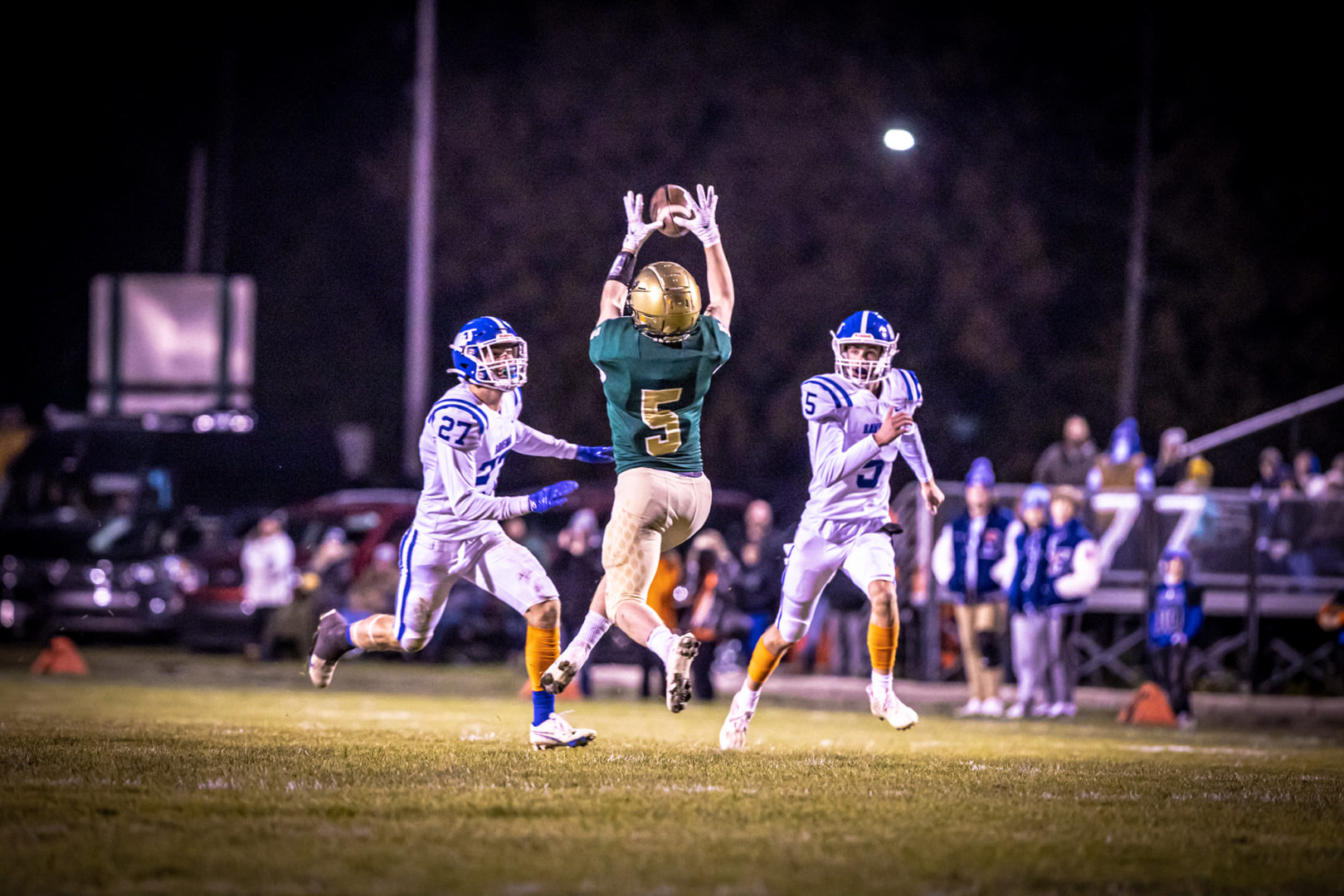 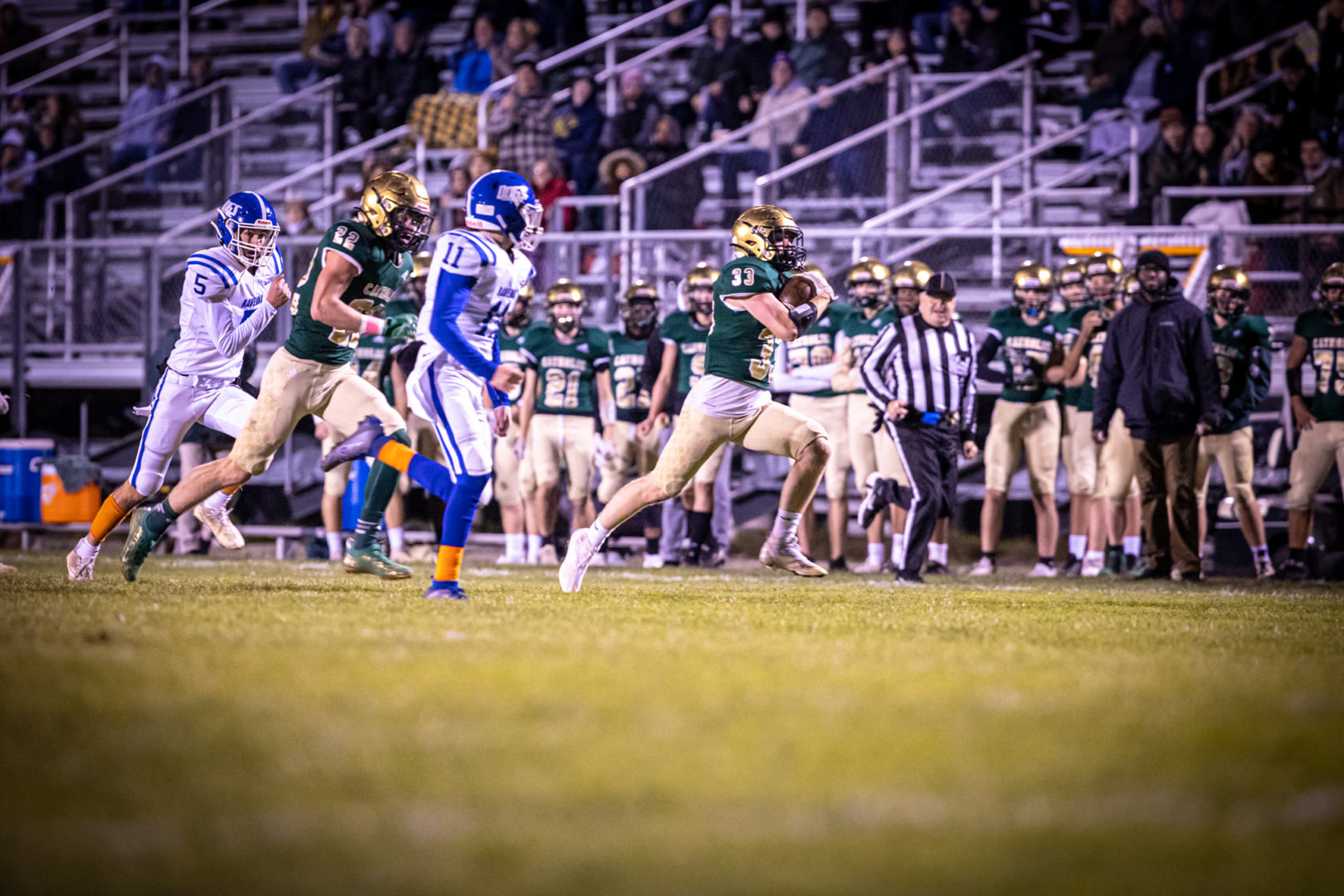 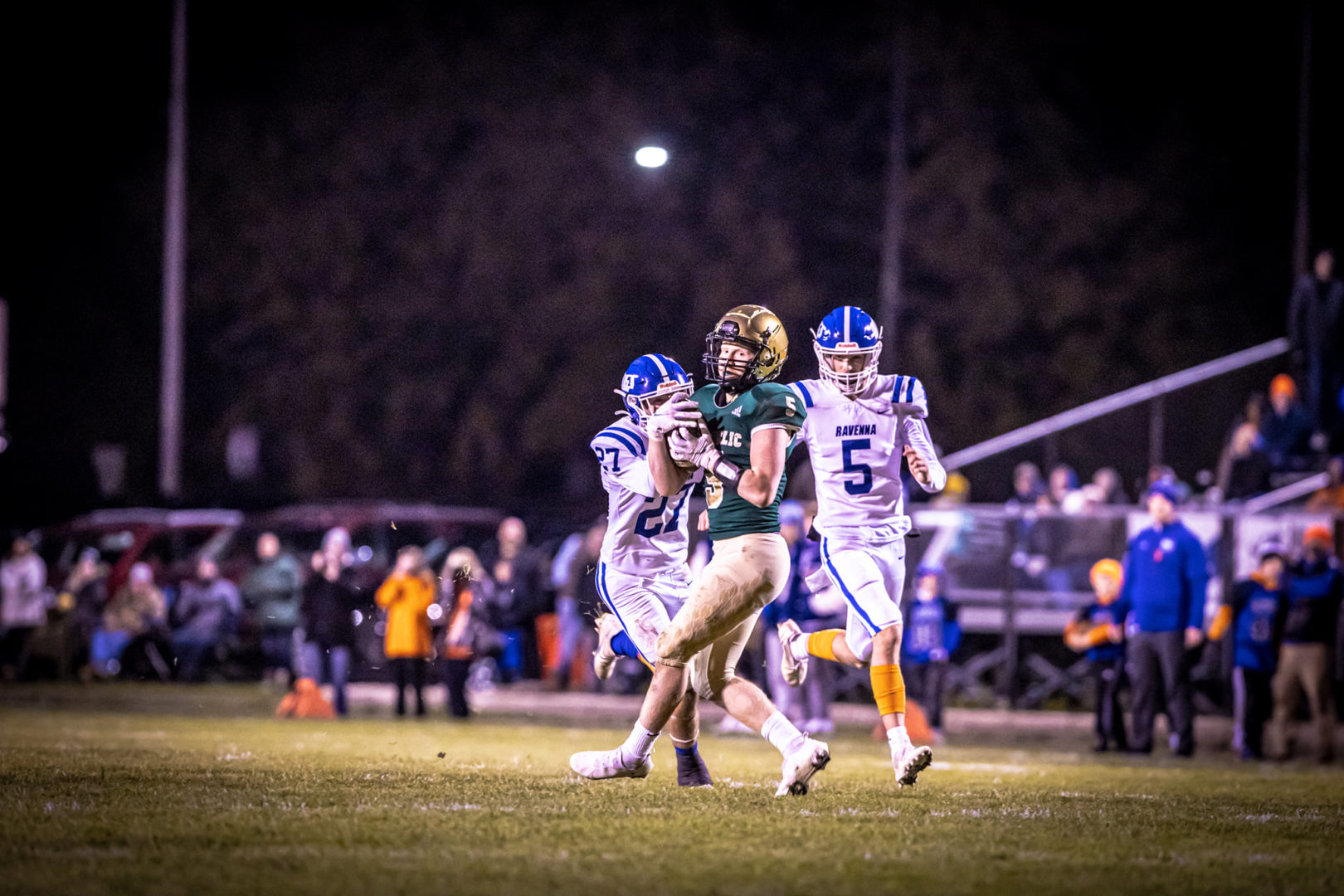 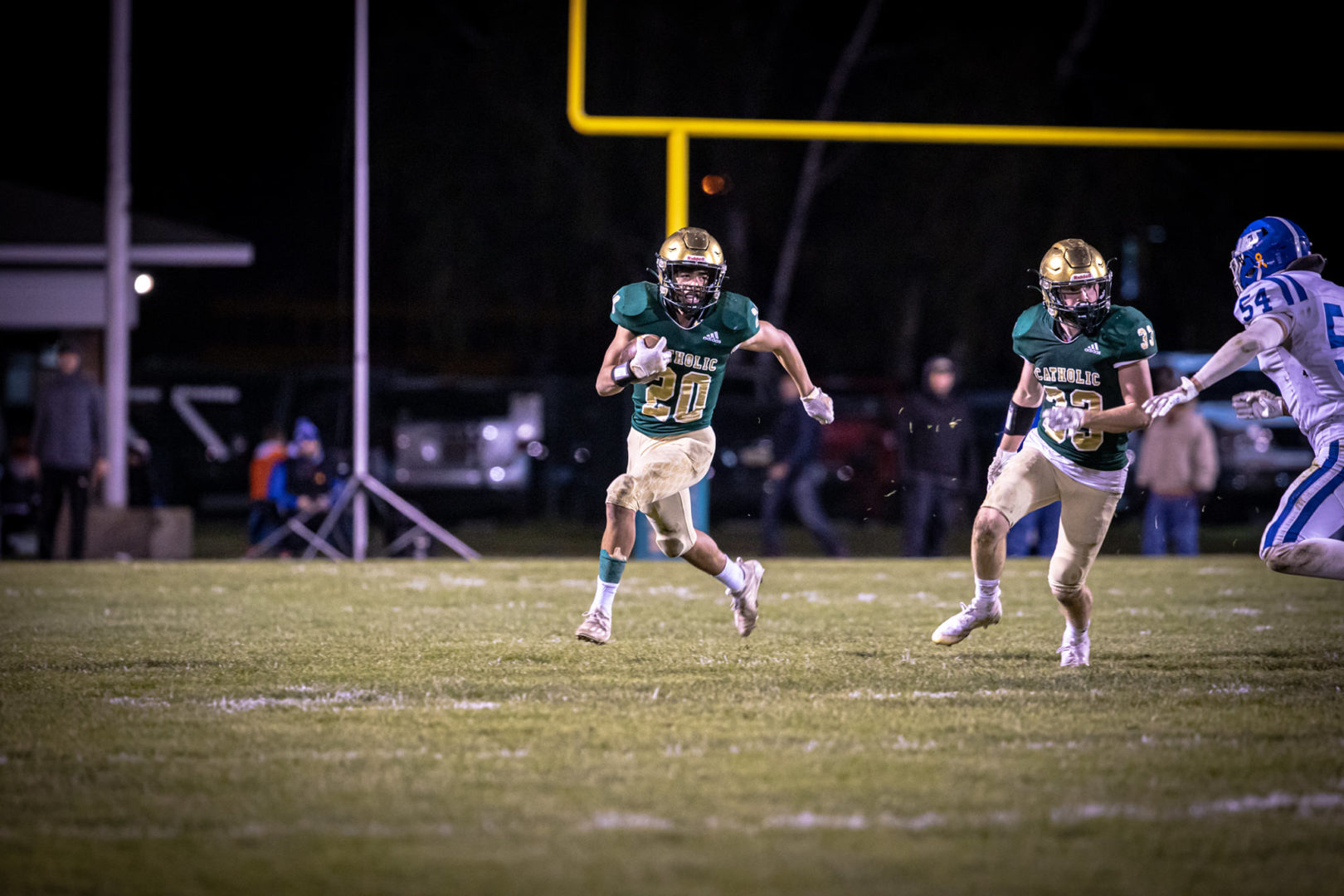 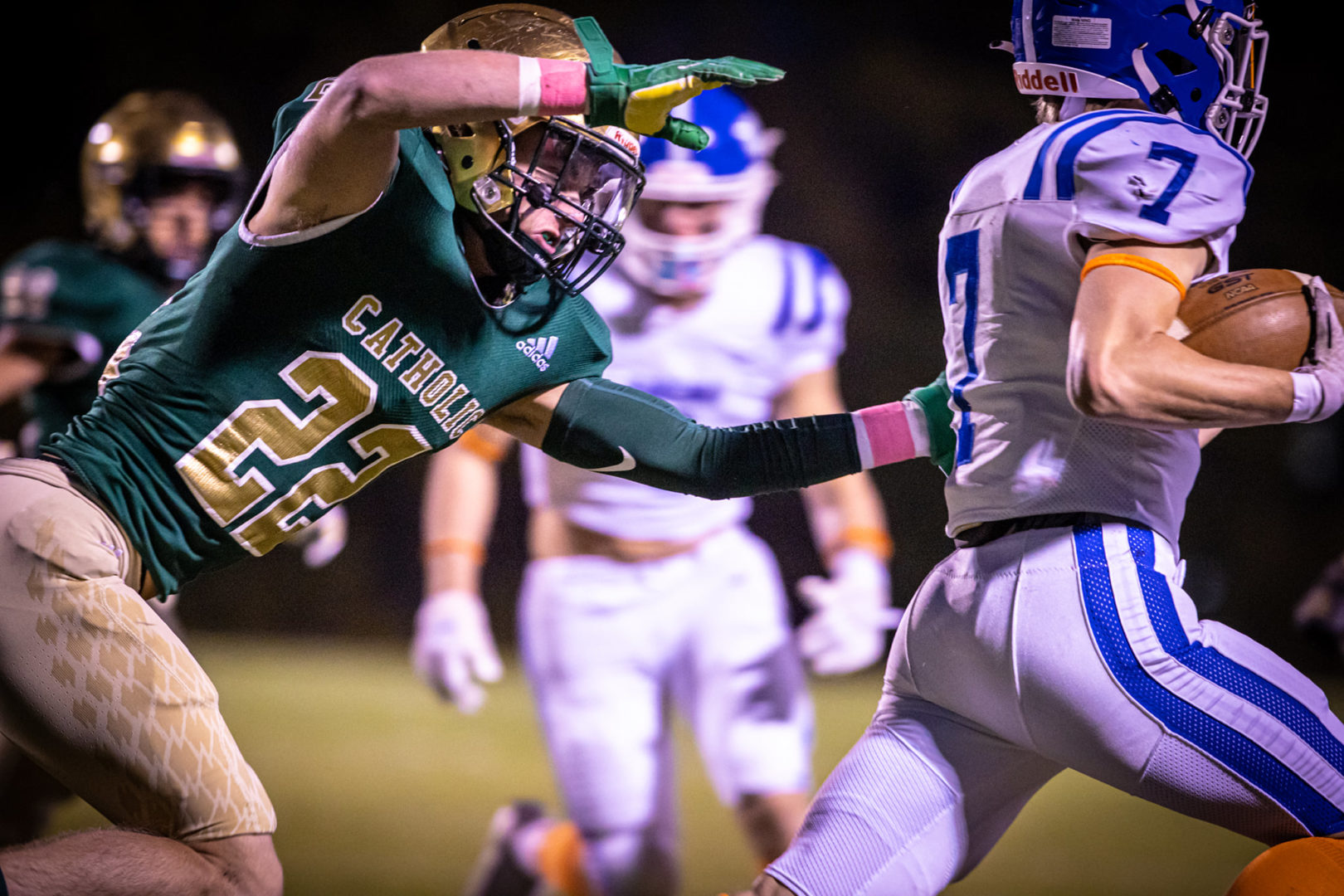 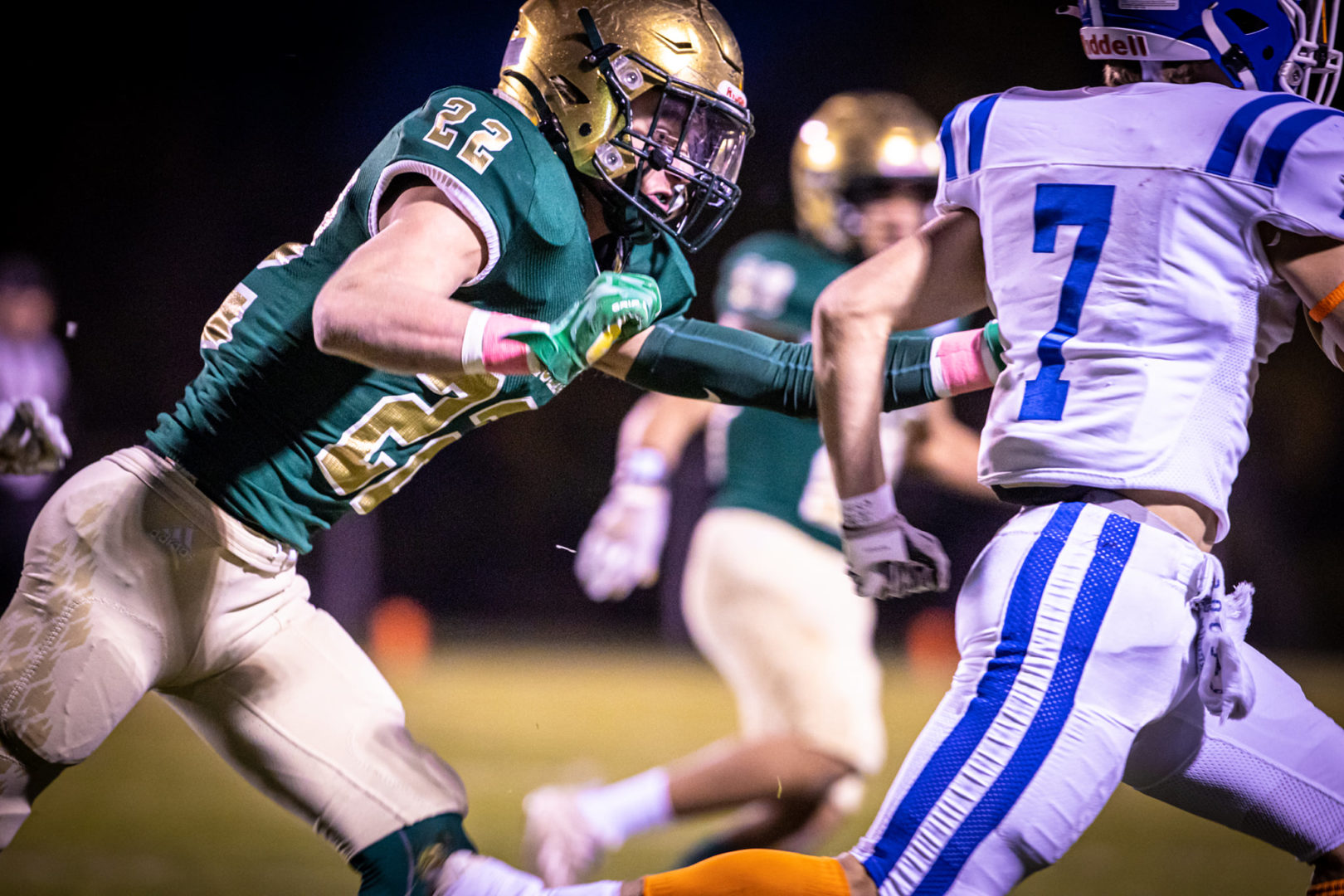 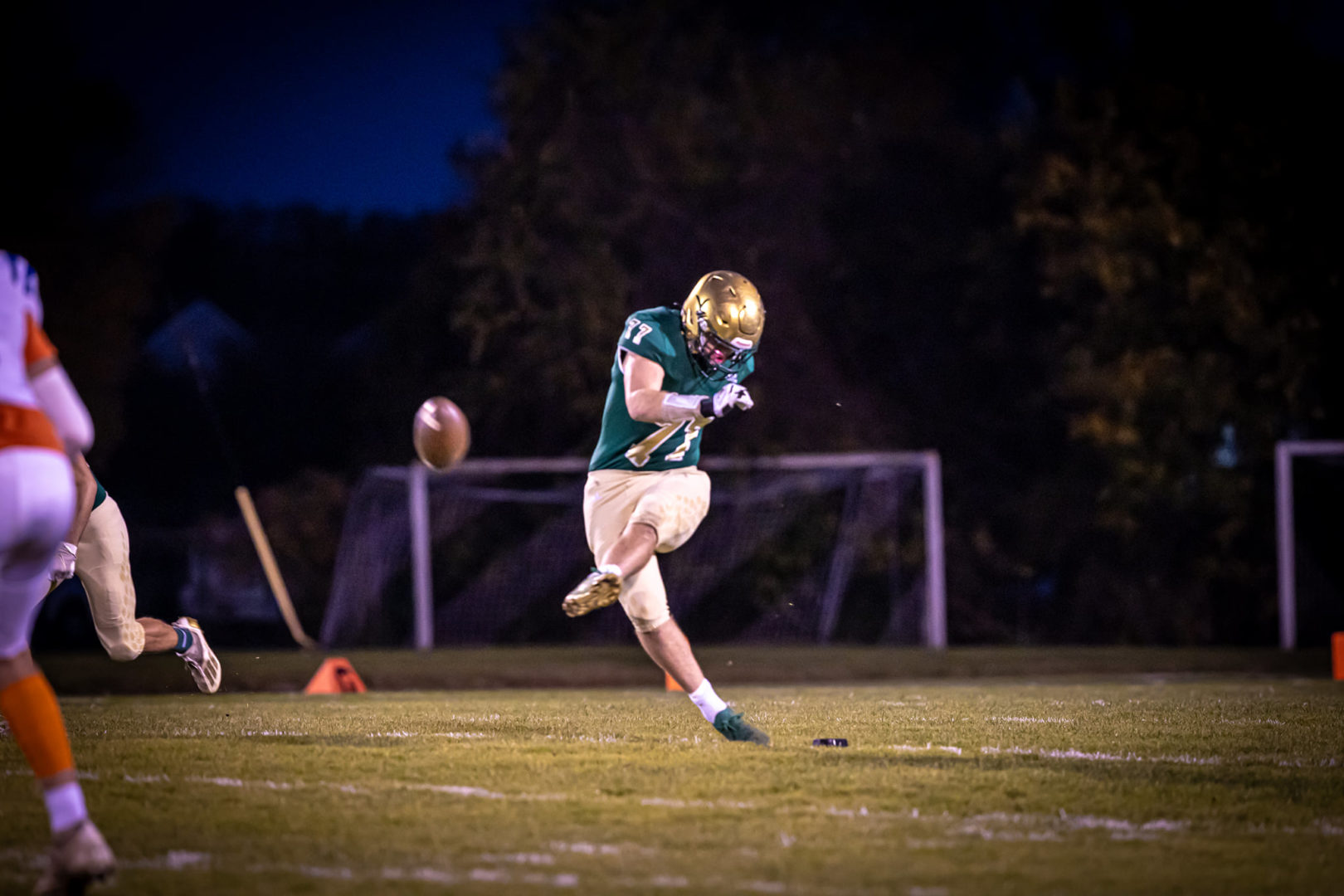 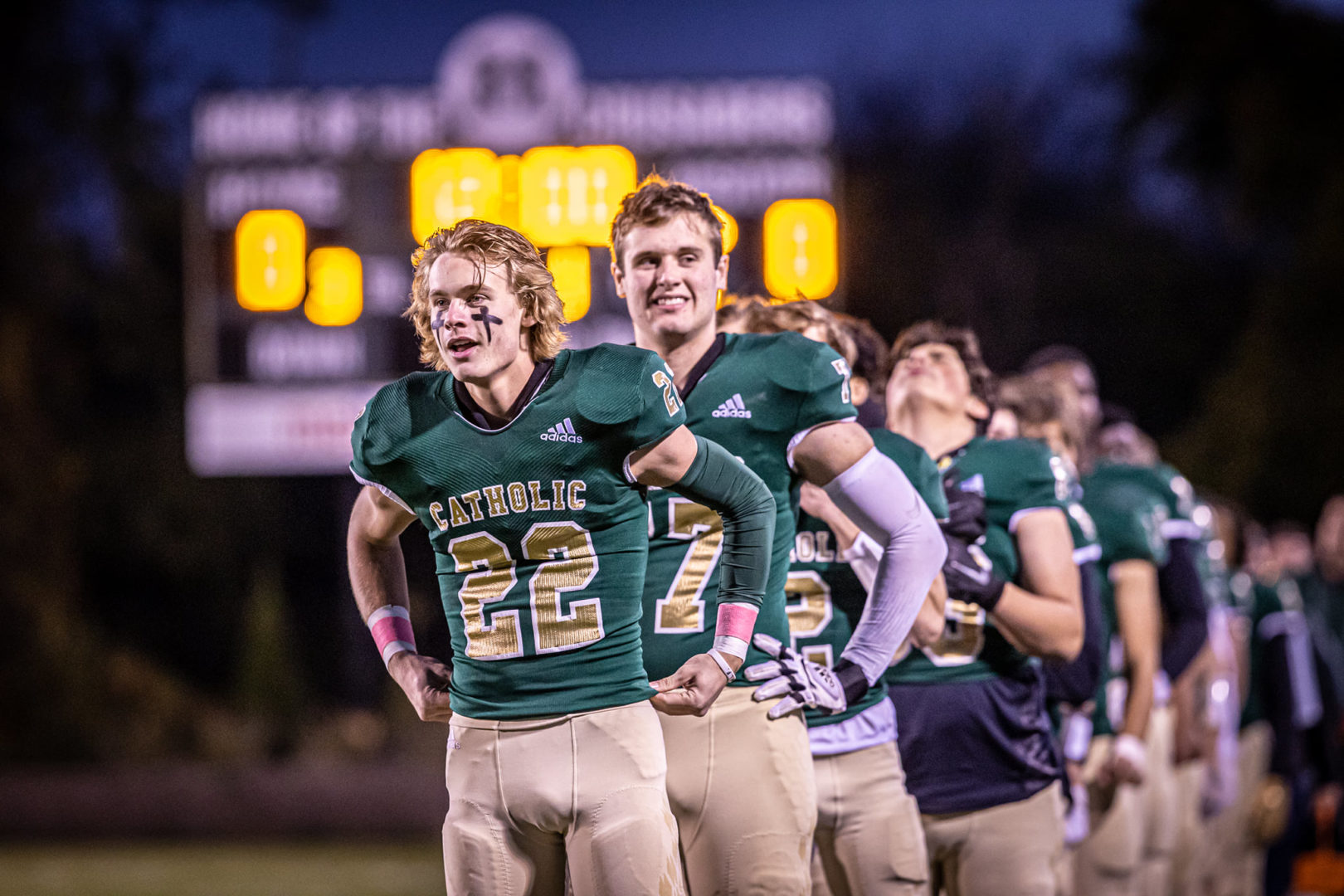 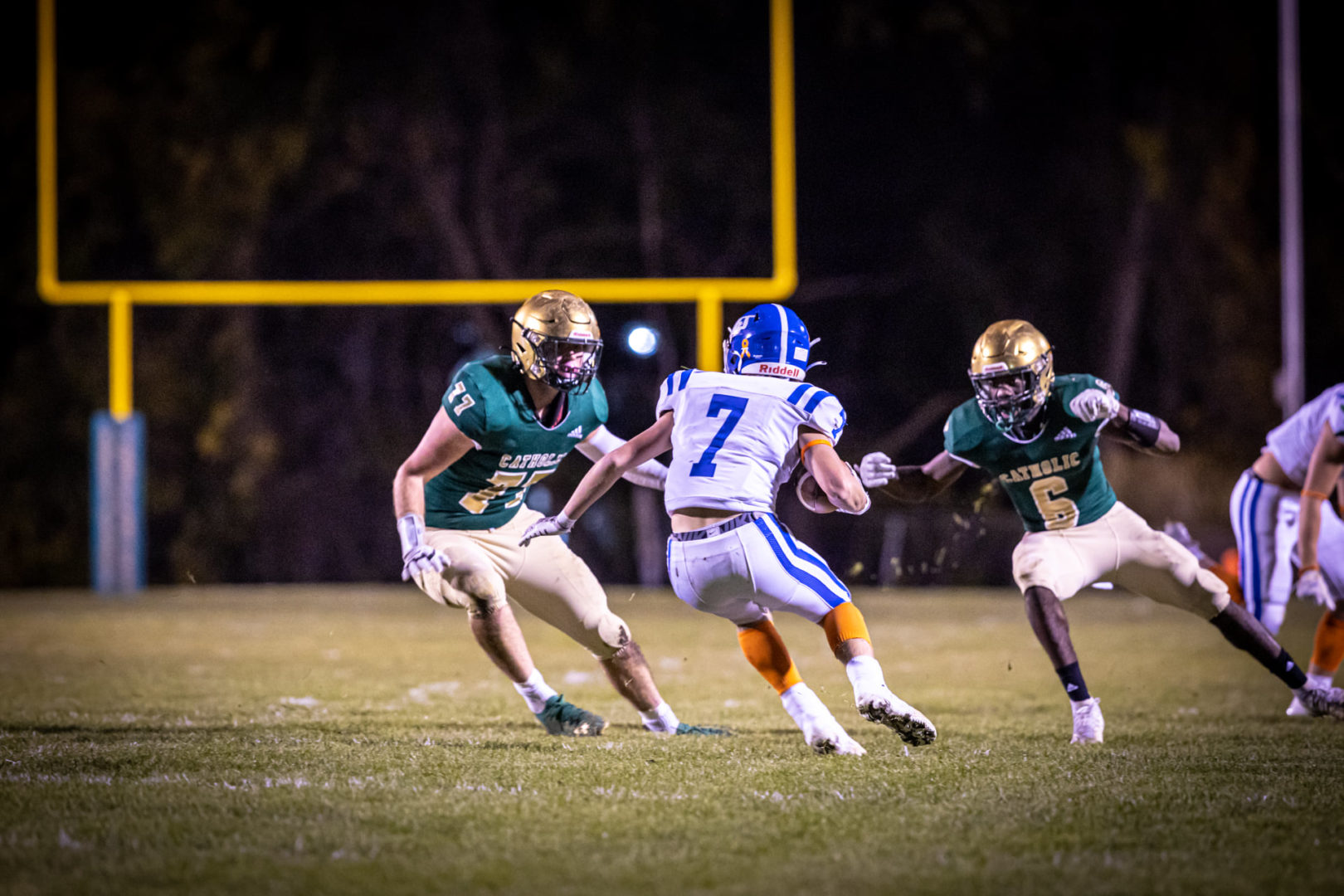 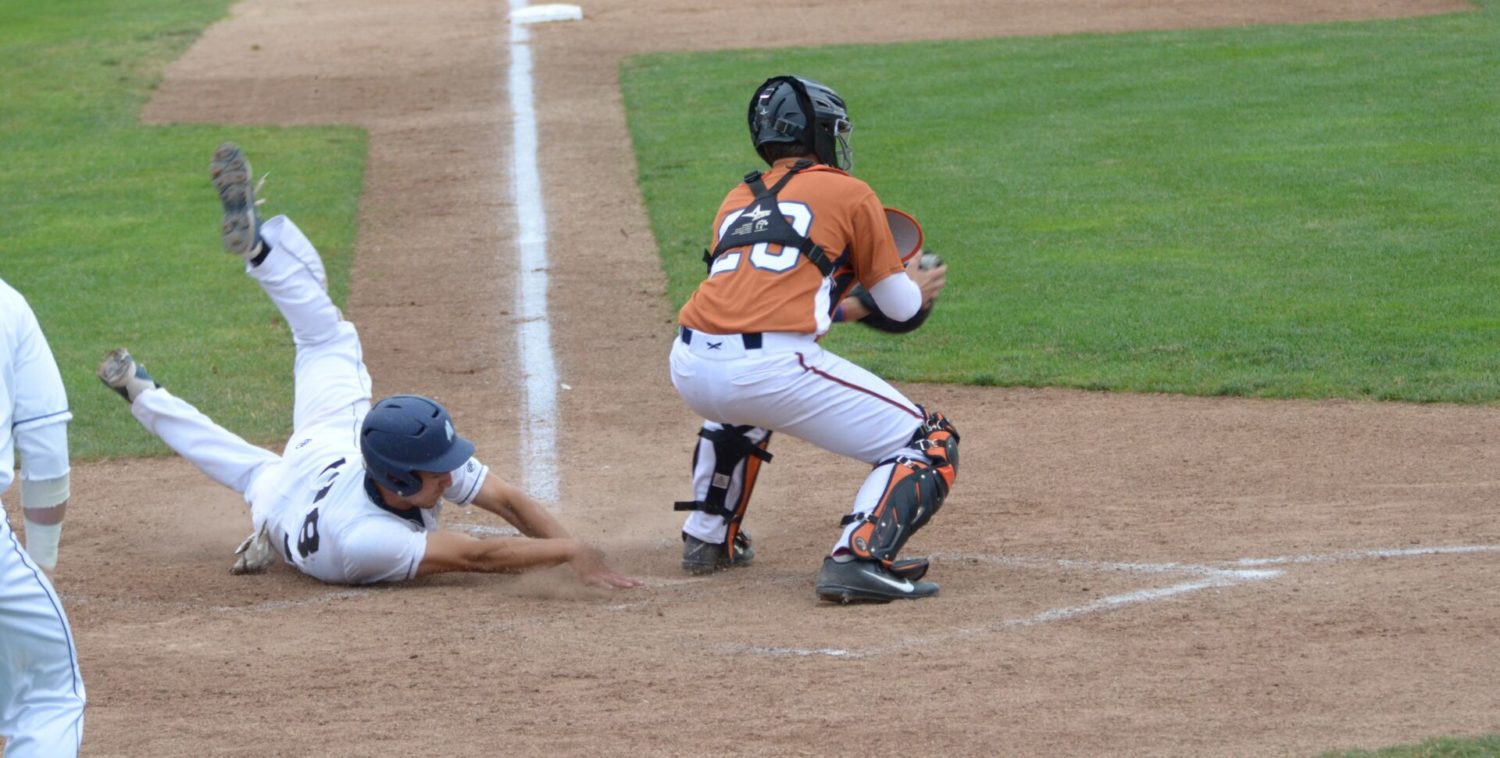 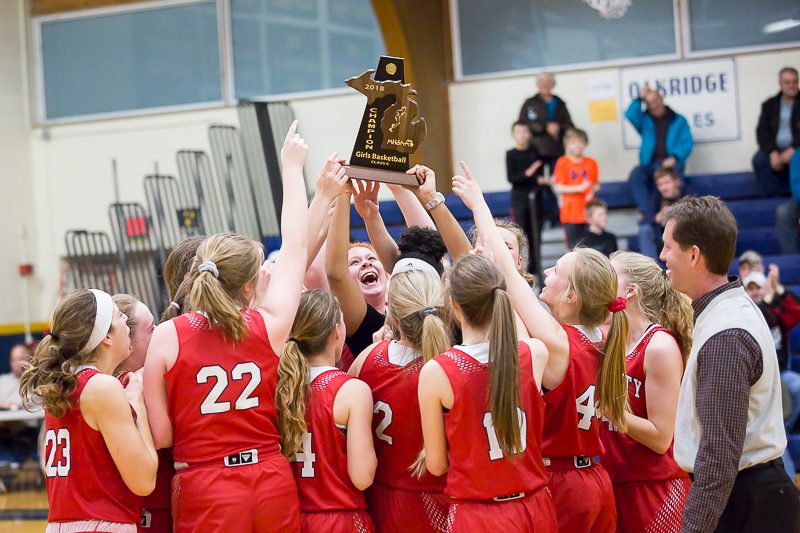