Whitehall comes up short in 24-14 loss to Cadillac

CADILLAC – Whitehall’s football team saw its season come to an end Friday night when Cadillac pulled out a 24-14 victory to win the Division 4 district championship at War Memorial Stadium in Cadillac.

It’s always tough when you lose in the playoffs, but this one might have stung a little bit more for Whitehall because the Vikings had their chances to come away with a win.

Penalties threw the Vikings back on several occasions when they had drives going.

“Every time we had a first down, all of a sudden it was like bam! Holding, holding, holding,” Whitehall head coach Tony Sigmon said. “That’s really uncharacteristic for us. That’s never really happened this year. I guess I’ll have to look at the film on that and be a better coach on that.”

The Vikings got behind, 17-0 in the second quarter and looked like they might trail by more when they lost a fumble to the Cadillac Vikings, who recovered it at the Whitehall 24-yard line.

Whitehall then swung momentum in its direction when it marched down the field, and cashed in the opportunity with senior running back Alec Pruett scored on a four-yard run around end with 41.7 seconds. 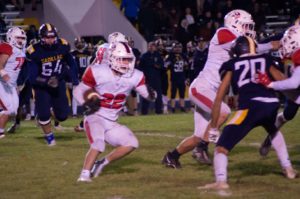 Whitehall senior running back Alec Pruett (22) gains some yardage against Cadillac in the first half of Friday night’s Division 4 district final in Cadillac. (Photo/Greg Gielczyk)

It narrowed Whitehall’s deficit to 10 points, 17-7 at the halftime break.

What did the coaches talk with the team about in the locker room after being able to score that touchdown?

“Really, we just wanted to make a couple quick adjustments,” Sigmon said. “We felt we had kind of figured out as far as what we needed to do schematically.

“So, we made those adjustments, and the kids came out and battled their hearts out the second half.”

Whitehall threw a scare into Cadillac when it took the second half kickoff and marched right down the field, capped by junior Nate Bolley’s five-yard scoring scamper that cut the Cadillac lead to three, 17-14 with 7:41 left in the third quarter.

Cadillac threatened on its ensuing possession, a 33-yard pass play edging the Vikings into Whitehall territory at the Viking 42-yard line. Whitehall’s defense held, though, and forced a punt early in the fourth quarter.

The Vikings couldn’t move the ball, and a fourth down attempt failed, turning the ball over on downs. Cadillac would score on the next play making it a 10-point game again with 4:24 left in regulation.

“It felt like every time we had a good play or something, something weird would happen, something crazy,” Sigmon said. “It was a tough night.

“This is an excellent football team right here, and I love them dearly. I think they’re great kids. Our kids settled in after we had a couple really bad things happen and everything, and we were ready to play at a high level. I’m really excited about that.” 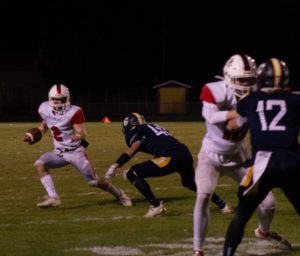 Stratton finished 8-of-15 passing for 87 yards.  He also led the Vikings in rushing with 95 yards on 13 carries. Red Watson caught two passes for 41 yards.

Whitehall had 317 yards total offense to 312 for Cadillac.

Whitehall also outgained Cadillac in rushing with 291 yards to 225.

Pruett gained 62 yards on 18 attempts with one touchdown, and Bolley had 53 yards on five carries with a touchdown.

Whitehall loses 12 seniors, including several that were important contributors, but returns a lot of younger players and Sigmon expects to have a good team next year.