ANN ARBOR – Following his senior season of football at North Muskegon, Noah Stewart knew he wanted to play the sport at the next level, but he felt his limit was at a Division 2 or 3 school, such as Michigan Tech University.

And why not? His father, Michael, and uncle Jim, both played football for Michigan Tech. 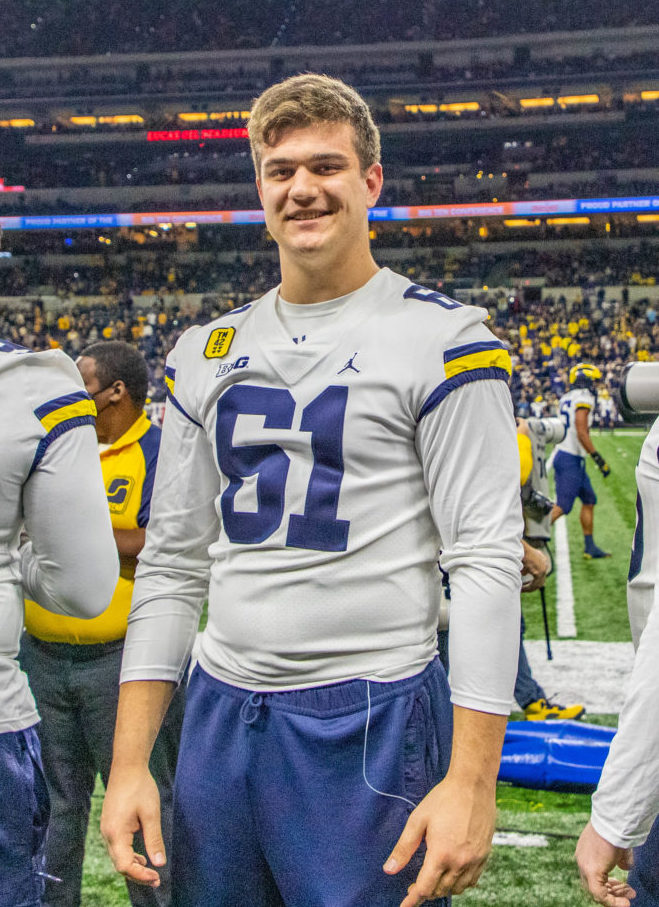 North Muskegon grad and U of M offensive lineman Noah Stewart, stands on the sideline during the Big Ten Championship game against Iowa at Lucas Oil Stadium in Indianapolis on December 4. Now Steward and his teammates prepare for Georgia and New Years Eve. Photo/Brett Farmer

But almost on a whim, Stewart banked on himself and his senior highlight film and wound up fulfilling what he thought was only an unrealistic dream – playing for the University of Michigan Wolverines, who will take on Georgia on New Year’s Eve in a national semifinal game.

“I was briefly committed to Michigan Tech,” Stewart said recently on a study break for final exams. “Really, that was my dream to play at Michigan Tech because my dad and uncle had both gone there.”

But even after he committed, Stewart and his family began discussing other opportunities he could pursue. Stewart himself admitted, what’s the worst that could happen?

“It was my uncle who actually said, ‘You need to get your film out there,’ Stewart recalled. “You never know what could happen.”

By pure fortune, a family friend was an acquaintance of Allen Trieu, a West Michigan native who now is a college football recruiting analyst for 247Sports.

“They said he could easily get my tape on (University of Michigan head coach) Jim Harbaugh’s desk,” Stewart said.

Sure enough, once college coaches and recruiting coordinators got their eyes on Stewart’s blend of elite size at 6-7 and outstanding athleticism on tape, they began to blow up his social media.

“I had no idea that was going to happen,” he said. “I was getting interest from a handful of (Mid-American Conference) schools and a lot of recruiting coordinators at some big-time schools started sending me personal messages and following me on Twitter. I’d have coaches come to my basketball games. It was all just crazy to me.”

Stewart’s first Division 1 offer came from South Dakota State, and he also received preferred walk-on interest from Michigan State and Iowa and a grayshirt offer from Western Michigan University. But it was a message from then-offensive line graduate assistant Josh Hendershot from the University of Michigan that really sparked Stewart’s interest.

“Josh Hendershot from Michigan reached out and said they were interested in offering me a preferred walk-on spot,” Stewart said. “It was such a huge offer to me because a Michigan degree carries so much strength.”

Stewart carried a 3.7 grade point average through high school and had grown up a Michigan fan and just thinking about playing at Michigan Stadium, “The Big House,” gave him goosebumps.

But he wasn’t sold on the opportunity until he visited Ann Arbor and got a personal feel for the program. 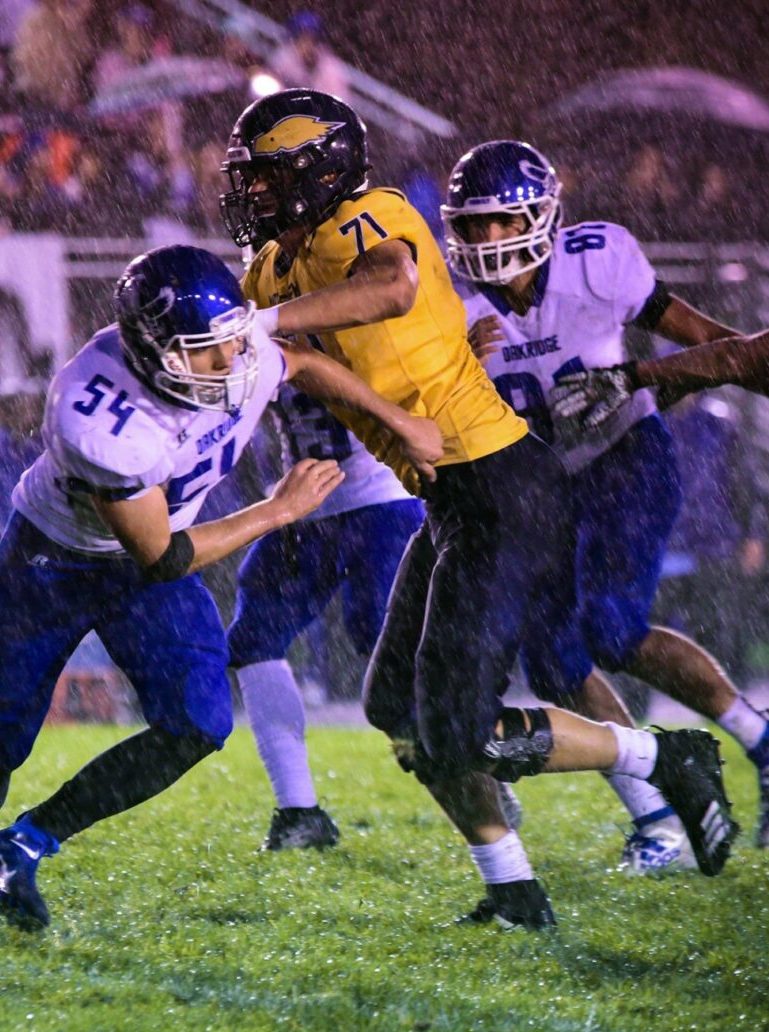 No. 71 Stewart during his days playing for North Muskegon. Photo/Mitchel Dixon|MSD Photography

A handful of offensive line assistants showed Stewart around campus, including a tour of their facilities, weight room and study areas. He also talked in-depth with then offensive line coach Ed Warriner.

But Michigan’s best pitchman, Stewart said, was Andrew Vastardis, a former walk-on himself who developed into one of the best centers in the Big 10 Conference.

“He’s a big reason why I committed,” Stewart admitted. “I talked with him quite a bit and he told me how walk-ons were treated at Michigan. Honestly, before all of this happened, I had no desire to be a walk-on, because you always hear stories about how the rest of the players treat them like dirt and you basically spend four years getting your (butt) kicked.

“But (Vastardis) said walk-ons were treated like anyone else on the team. He was very honest about everything.”

While Stewart possessed the athleticism of a tight end, he initially was also the size of a college tight end, not a Division 1 college offensive lineman.

“I’ve always said you can’t coach height and you can’t coach determination, and Stewie’s got both of those traits,” he added. “He’s a very determined kid, both academically and certainly athletically. We tried to play him at tight end his senior year because he runs extremely well for a kid his size and he’s got good hands. He just lacked some of the instincts. But we sat down with him before the season and he told us he’d like to move back to tackle. It turned out to be a good decision.”

It didn’t take long for Stewart to realize he was a small fish in a huge pond when he enrolled at Michigan and began practicing. His roommates during his first season were fellow freshmen defensive lineman Kris Jenkins, linebacker Nikhai Hill-Green and star running back Blake Corum.

“Blake and Nikhai are from (Baltimore) St. Francis, an elite private school that traveled to play schools from all over the country,” Stewart said. “And here’s me from tiny North Muskegon, where our furthest game was a two-hour drive. It was definitely a culture shock.” 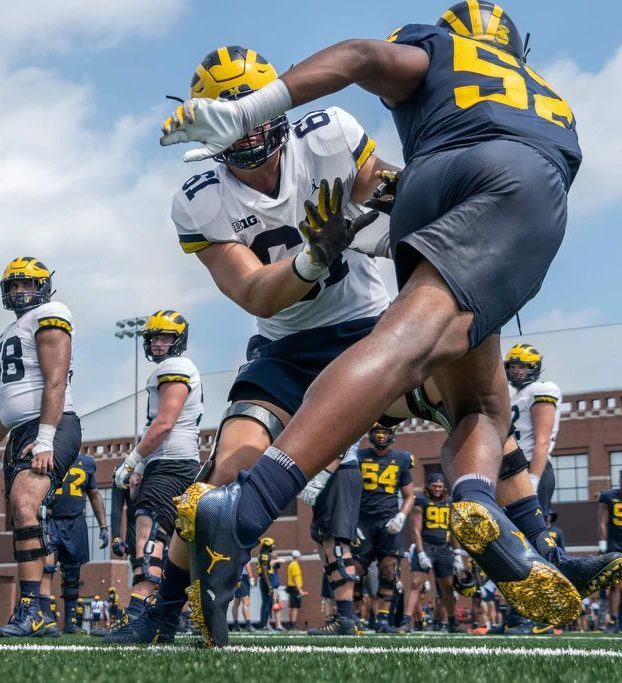 Stewart said he tried to be a sponge and soak up as much knowledge as he could from his veteran teammates and coaches. Learning practice habits from Vastardis, whose intensity is always at 110 percent, has also been vital.

“No disrespect to North Muskegon, but I learned more about playing O-line in two months at Michigan than in eight years in North Muskegon,” he said. “Just everything from hand and foot placement to balance and movement. It’s a lot.”

Stewart admitted he did get beat up his first season in Ann Arbor, especially lining up against future NFL talent on a daily basis.

“The strength of these guys is just insane,” he said. “I was the strongest guy at my school in North Muskegon, but when I got here, I was the weakest. The first time I was on the scout team, I had (current Indianapolis Colts defensive end) Kwity Paye line up in front of me and I’m thinking, ‘How the hell am I going to block this guy?’”

Stewart took his lumps, but he survived by going through Michigan’s strength program and eating an extraordinary amount of calories. Stewart’s case is unique because he’s a Type 1 diabetic, but he said he’s formed friendships with nutritionists at the school to aid him with his diet.

“It’s basically a seafood diet,” Stewart joked. “You see food and you eat it.”

Here’s a typical menu for Stewart during the season: For breakfast, he said he’ll consume about eight eggs, along with hefty portions of bacon or sausage, along with French toast or pancakes.

For lunch, it’s typically high-carb options like lasagna (3 or 4 pieces) and veggies.

“I’ll also have some coffee to get me through the rest of the day,” he said.

Dinner is Stewart’s favorite, and the best is on Monday’s during the season after a Wolverines’ win.

“They call them the ‘Victor’s Meal,’ and they’ll roll out some nice steaks, lobster tails and a lot of ice cream.”

Witham noticed the difference immediately when the now 283-pound Stewart was back home recently for a few days and asked his former coach if he could get into the weight room.

“He’s a grown man now,” Witham said. “Kids going into a situation like that, it’s sink or swim. I’m sure he’s gotten beaten down a lot, but he’s brushed himself off and gotten back up. And after a while, if you dedicate yourself like he is, you’re no longer the hunted but the hunter.”

Stewart got his first taste of being a hunter earlier this fall, when he saw his first game action in the Wolverines’ dominating win over Northern Illinois on Sept. 18.

“(First-year offensive line coach Sherrone) Moore was hyping them up all week, so I figured I wouldn’t be playing,” Stewart said. “I didn’t even get my ankles taped before the game.”

But with U-M holding a huge 60-point lead entering the fourth, Moore approached Stewart and told him to ‘Be ready.’

“Then he told me I was going in and I actually had to rip my insulin pump right off my arm,” Stewart said.

Stewart played just three plays at left tackle – all run plays – but when he came back to the sidelines, he could see his parents, mom, Kerry, and dad ,Michael, standing and screaming in the stands. Vastardis gave him a big hug in congratulations.

Despite seeing just three plays of action, this entire season has been a dream come true for Stewart, as Michigan has defied all odds by winning its first Big 10 championship since 2004, including a dominating win over rival Ohio State, and clinching their first berth ever in the College Football playoffs. 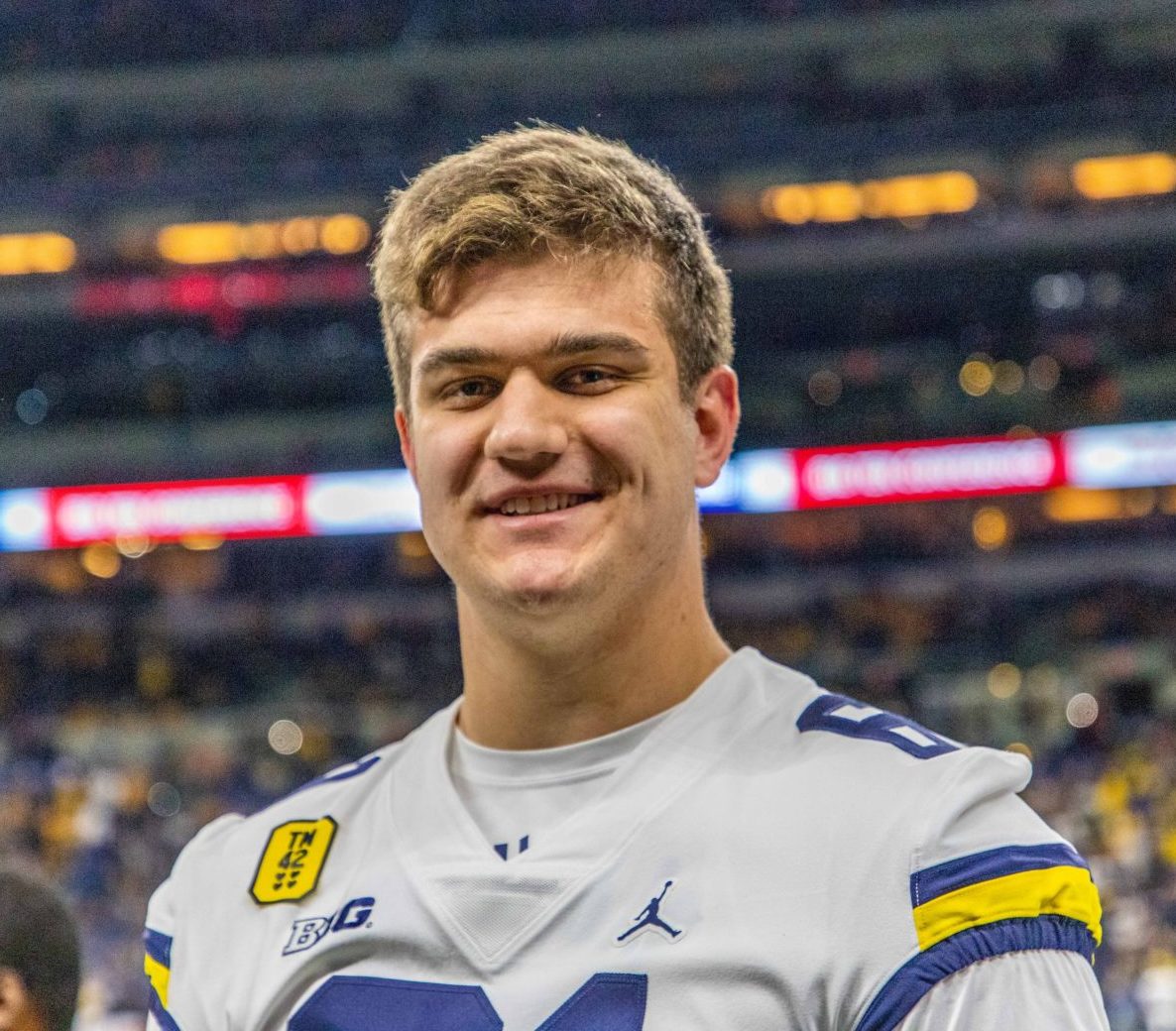 Stewart has been given a lot of great Christmas presents over the years, but maybe none as incredible and hidden as Michigan’s Big 10 Championship. Photo/Brett Farmer

As a non-scholarship player, Stewart didn’t travel to road games this season, but he will be on the sidelines for U-M’s semifinal game against Georgia on New Year’s Eve in Miami, Florida.

Stewart attributed the team’s resurgence from last season’s dismal Covid-shortened 2-4 finish to a different attitude from the players, aided by a new, younger coaching staff including the enthusiastic Moore.

“As a freshman, practice felt like a job. It wasn’t fun,” Stewart said. “This year, the first day of spring ball, we were bumping music and it was just a different vibe. During the ‘Beat Ohio’ drill that we started, we were busting out some hard rock and we were all screaming. It’s just been a blast to be a part of and we’ve kept that same energy all season.”

This off-season, Stewart said he’ll sit down with Moore, as well as head coach Jim Harbaugh, and talk about what he needs to do to take the next step. The ultimate ceiling for Stewart would be to get on scholarship and see consistent playing time before his time in Ann Arbor is over, but for now, it’s baby steps.

“I want to be part of the (O-line) rotation. That’s my goal,” Stewart said.

Regardless, Witham said Stewart now has opened a world of possibility to fellow athletes at North Muskegon. In other words, what seems impossible means it only hasn’t been accomplished yet.

“I’m as proud as proud can be,” Witham said. “There’s something to be said for a kid to be put on such a big stage like this. I tell you what, he’s determined to make it happen. But I told him, ‘Don’t forget where your roots are. You may be in a big pond now, but it’s not too big for you.”

Check out photos from Steward during the season on the field at the Big House in Ann Arbour. 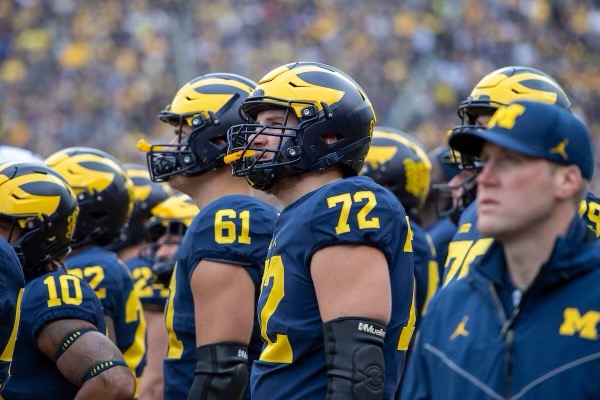 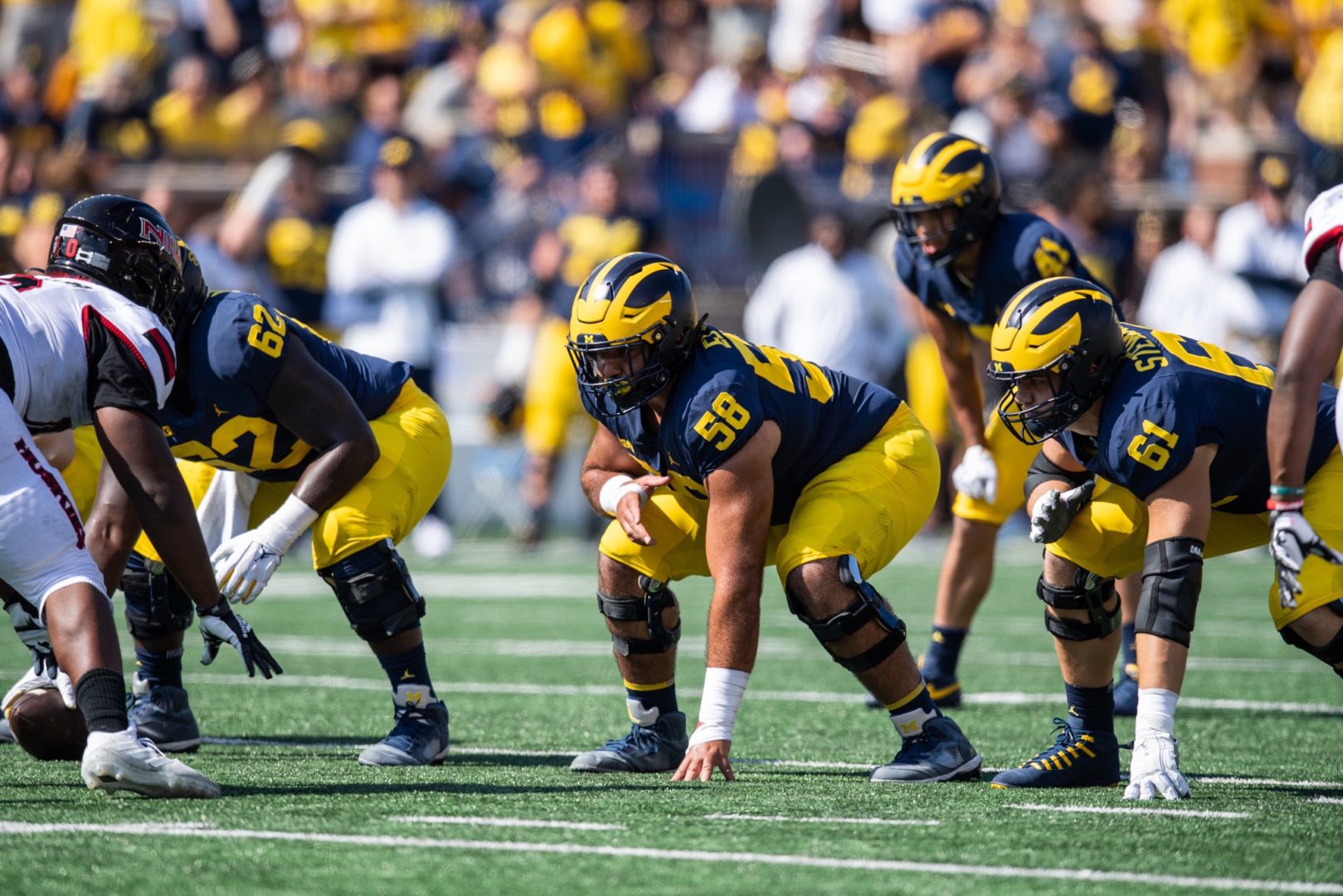 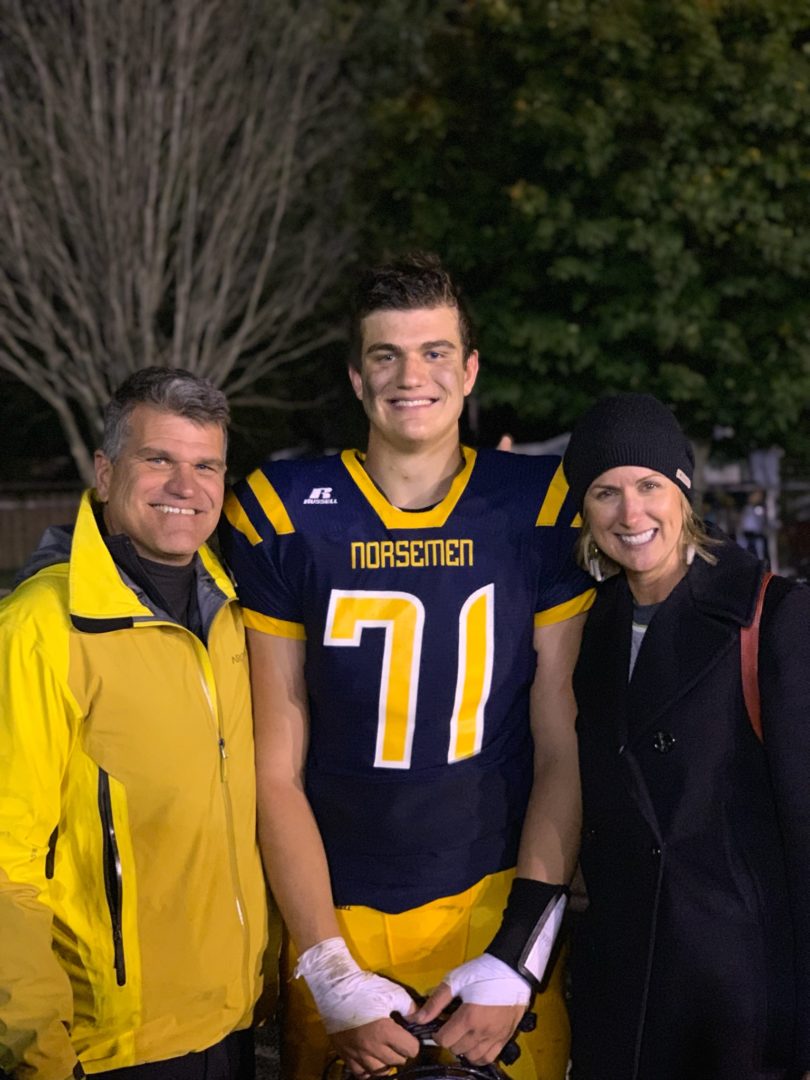 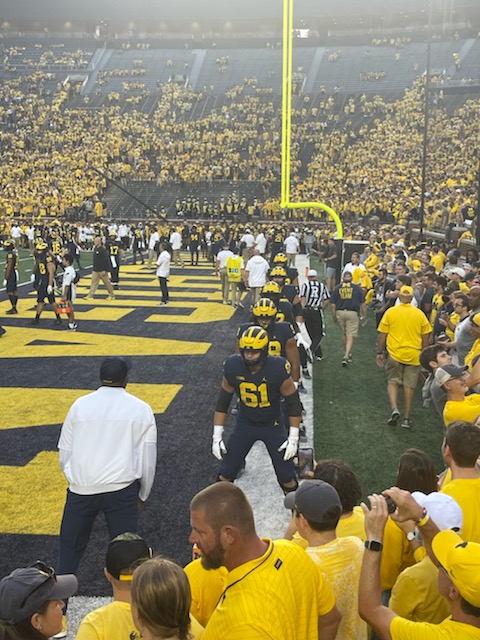 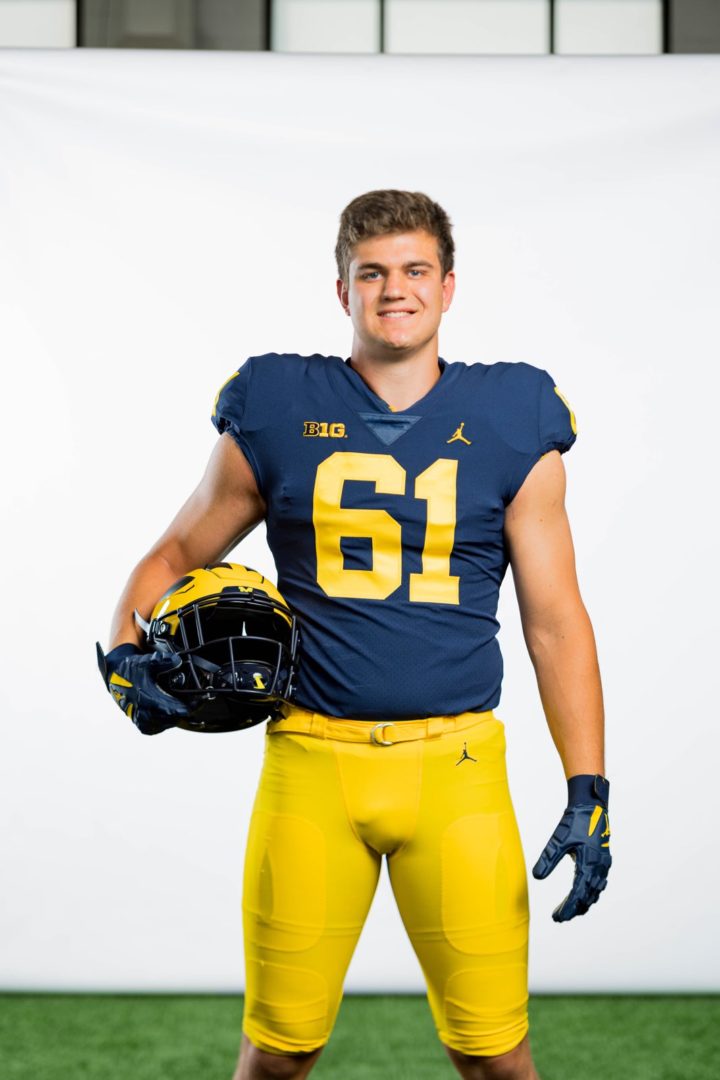 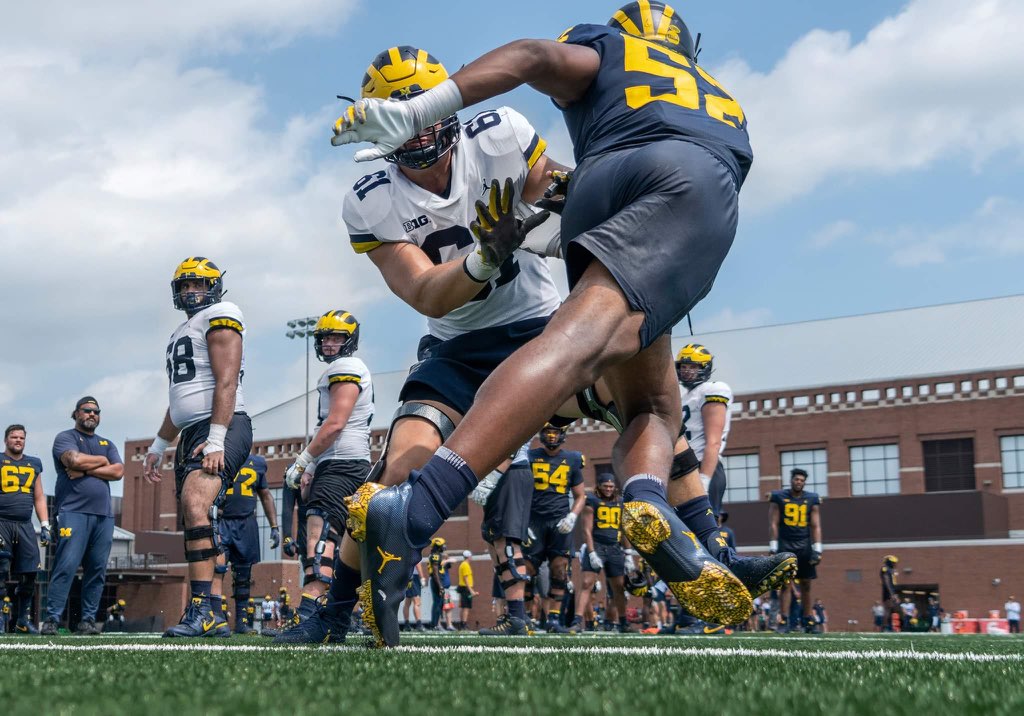 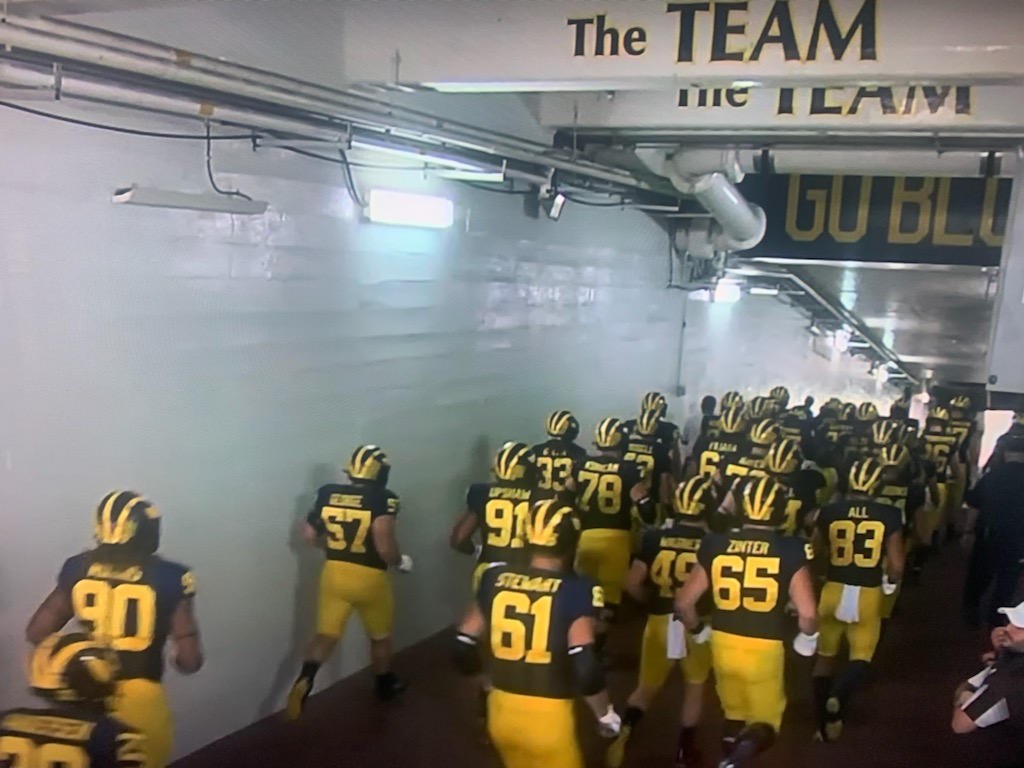