NORTH MUSKEGON—It was a tight one but the North Muskegon Norsemen girls basketball team got past Muskegon Heights Academy on Monday evening 44-40.

North Muskegon jumped out to a 11-8 lead after the first eight minutes of action.

Senior Molly Stewart had the hot hand early on for the Norsemen, dropping in two buckets from 3-point land and Gracie Philpot would convert on 2 two point field goals and a free throw, to account for all of North Muskegon’s first quarter points.

Muskegon Heights would make a second quarter, as junior Ty’veonna Davis would score 9 consecutive points for the Tigers putting them ahead 17-12 with 4:37 remaining in the first half. Heights would hold the upper hand in the second stanza 12-9 to knot things up at 20-20 at the halftime break. 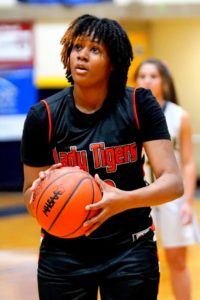 Heights would take the lead in the third quarter at 22-20 on a basket by Davis. It would be there last lead of the evening. The Norsemen went on 13-5 third quarter spurt to take a 33-25 lead entering the final eight minutes.

The Tigers got within three 41-38 with 2:50 remaining but could never get over the hump and North Muskegon held on although being outscored by the Tigers 15-11 in the fourth quarter.

“It was great for our girls to put four quarters together tonight,” said North Muskegon head coach Ryan Hankinson. “It was good seeing them have fun again. It was an important game for us.”

North Muskegon has been hit hard by injuries as they lost three starters before the season began. 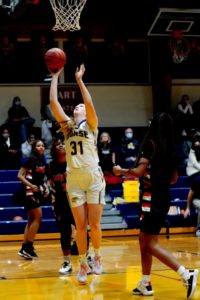 The Tigers were led in scoring by junior Ty’veonna Davis with a game high 21 points and junior A’Neia Johnson chipped in with 10 points.

North Muskegon is now 2-7 overall and is 0-6 in the West Michigan Conference. They will host league leading Hart (6-0) on Thursday evening.

Muskegon Heights saw its record drop to 1-3 overall. The Tigers are 1-1 in Lakes 8 Activities Conference play. Heights will travel to Holton on Wednesday evening for a matchup with the Red Devils