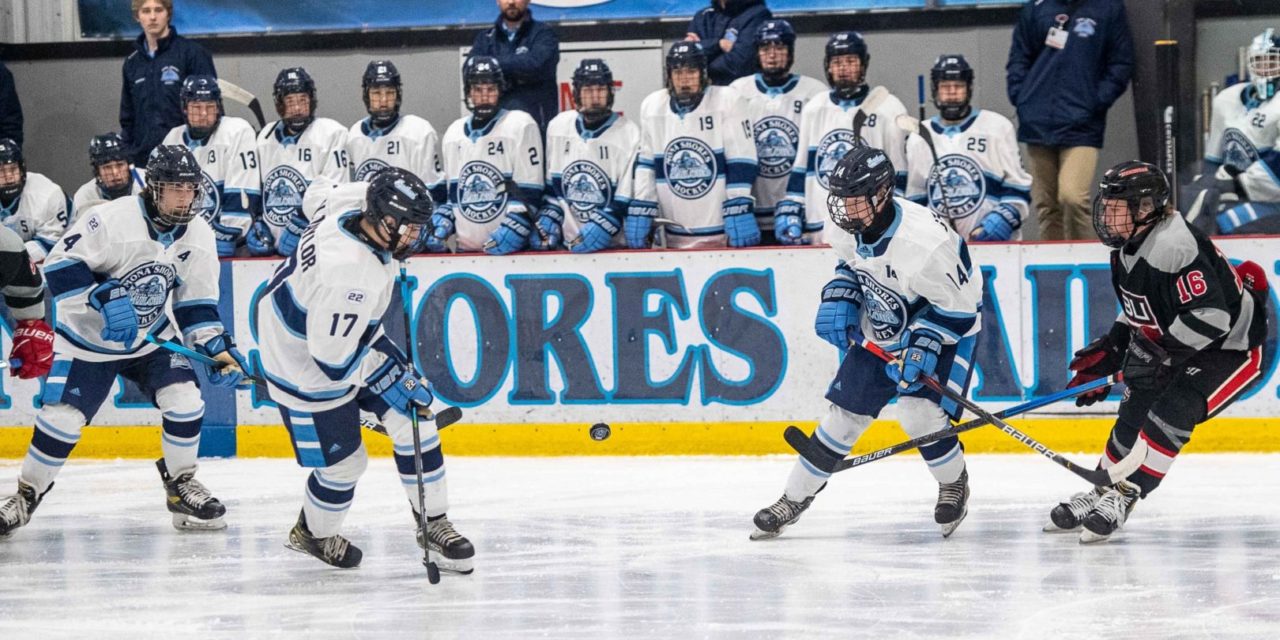 Mona Shores hockey’s top line of Trent Benedict, Jake Nanna, and Ty Langlois have been paired together since the first game this season, but the connection between the three goes back much further than this past November.

“I’ve known Jake and Ty my whole life, before I could even skate, I was hanging with Ty,” junior forward Trent Benedict said. “Jake and I have been playing hockey since we were 9 or 10.”

The familiarity with each other, as well as the rest of the team’s closeness, has been a major asset for the Sailors this season. Heading into the state tournament, Mona Shores has already claimed the O-K Conference Baum Division championship and holds a 20-4 record.

For a team that has had recent success, the next goal in front of them will be a deep playoff run. 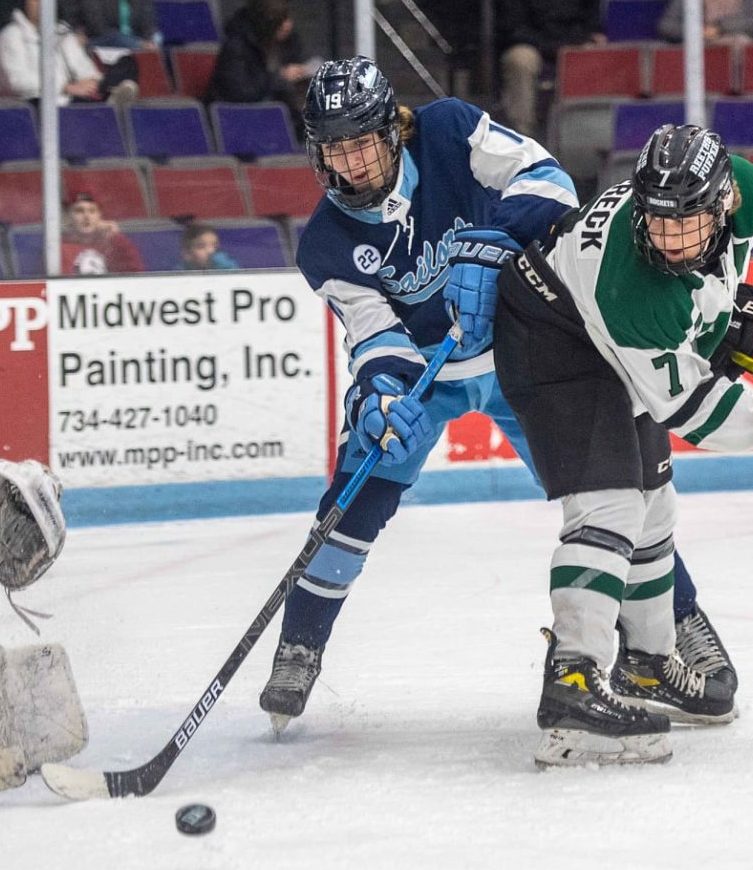 Mona Shores’ No. 11 Trent Benedict battles for a puck during the Sailors’ matchup with Reeths-Puffer earlier this season.

“We returned a lot of players from last year. This group of guys have been playing hockey together for several years,” coach Chris Benedict said. “There’s a trust factor there. They know tendencies and what they’re going to do and what they’re not going to do.”

While building trust and chemistry can take time over the course of the season with new players, having the same group of guys on a team gives the Sailors a leg up when it comes to just playing the game, Nanna said.

“You can trust everybody you step out on the ice with,” Nanna, a junior, said. “Knowing each other that well helped. Being out there with people you’re friends with and close with, it helps.”

Last year’s team, which featured many of these same players, enjoyed plenty of success, finishing with a 14-3-1 record, an O-K Conference Baum Division title, and a trip to the state regional finals, where they lost a 3-2 game to eventual state runner-up Byron Center.

Comparing the two teams, Chris Benedict said that this year’s version of the Sailors stacks right up next to last year’s team.

Langlois, a senior, said this is the best team that he has ever played on. 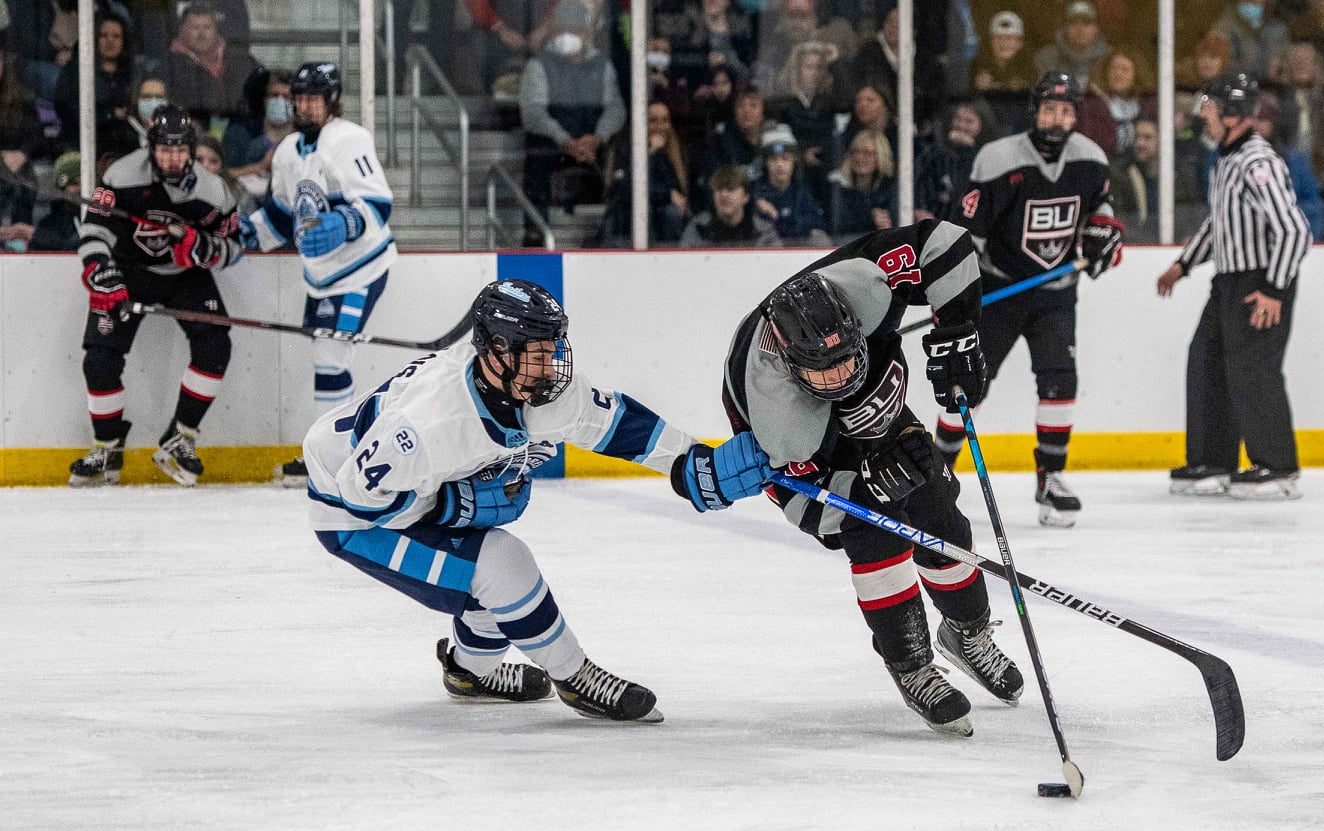 Mona Shores’ No. 24 Ty Langlois tries to poke the puck away against Byron Center. Photo/Eric Sturr

“I feel like we have more skill this year. I feel like the boys are coming together and having a better bond,” Langlois said. “The way we are, this is the best team I’ve been on, so I’m very confident with this team.”

For Chris Benedict, this year’s team is especially enjoyable because he’s been working with the players for a number of years.

“I love this group of guys. I’ve been coaching most of them since they were 9- and 10-years-old. They’re great young men,” Benedict said. “It’s awesome, watching them. The culmination of all the work they’ve put in and we’ve put in.”

With son Trent as part of that group, Chris Benedict said the two of them have found a good balance separating the home from the rink.

“We’ve finally after all these years found that balance. I think it helps that we separate the rink from home,” Chris Benedict said, adding that Trent does not get treatment any different from the rest of the forwards.

All four losses this year have come against some of the top teams in the state. In those four games, the Sailors have been within two goals in each game. Coach Chris Benedict said that while no one wants to lose games, it does give the team something to work on heading into the post season. 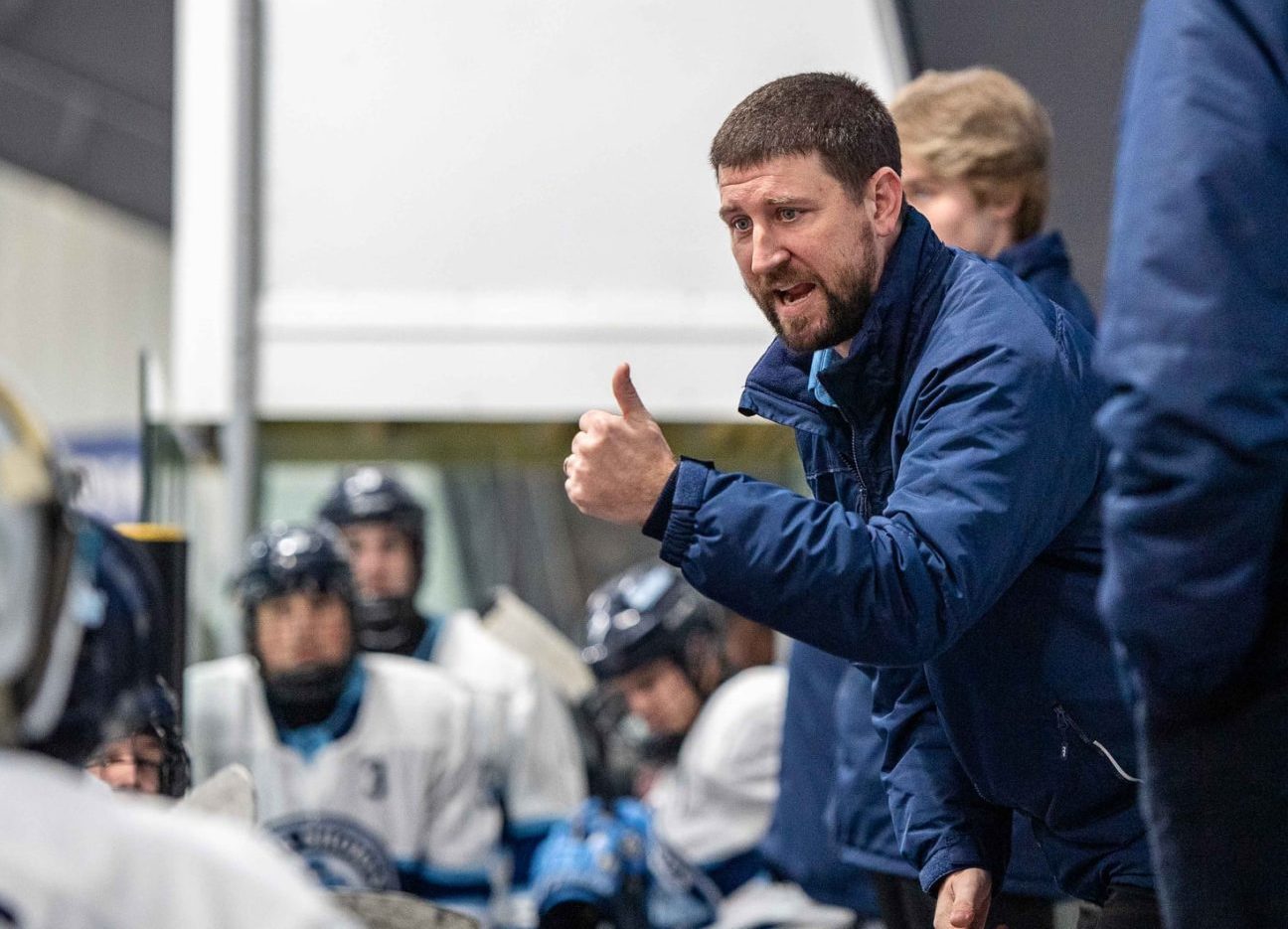 Coach Benedict talks with his team during a timeout. Photo/Eric Sturr

“Our four losses were against top teams in the state, all of them are relatively close games,” Chris Benedict said. “You never want to lose but they are good measuring stick games for us. We’re right where we need to be.

“If we can put three periods together, it’s going to be tough to beat us. I wouldn’t want to face us in the playoffs.”

With the start of the playoffs now here for the Sailors, Nanna said that the team is confident they can make a deep tournament run.

“This team, when we all set our minds to something, we go 100 percent,” Nanna said.

Trent Benedict agrees that this is a very talented team, but also said it is important to not overlook anybody.

“You can’t think that far ahead, you have to take it one game at a time,” Benedict said. “We’ll accomplish that goal by doing the little things right.” 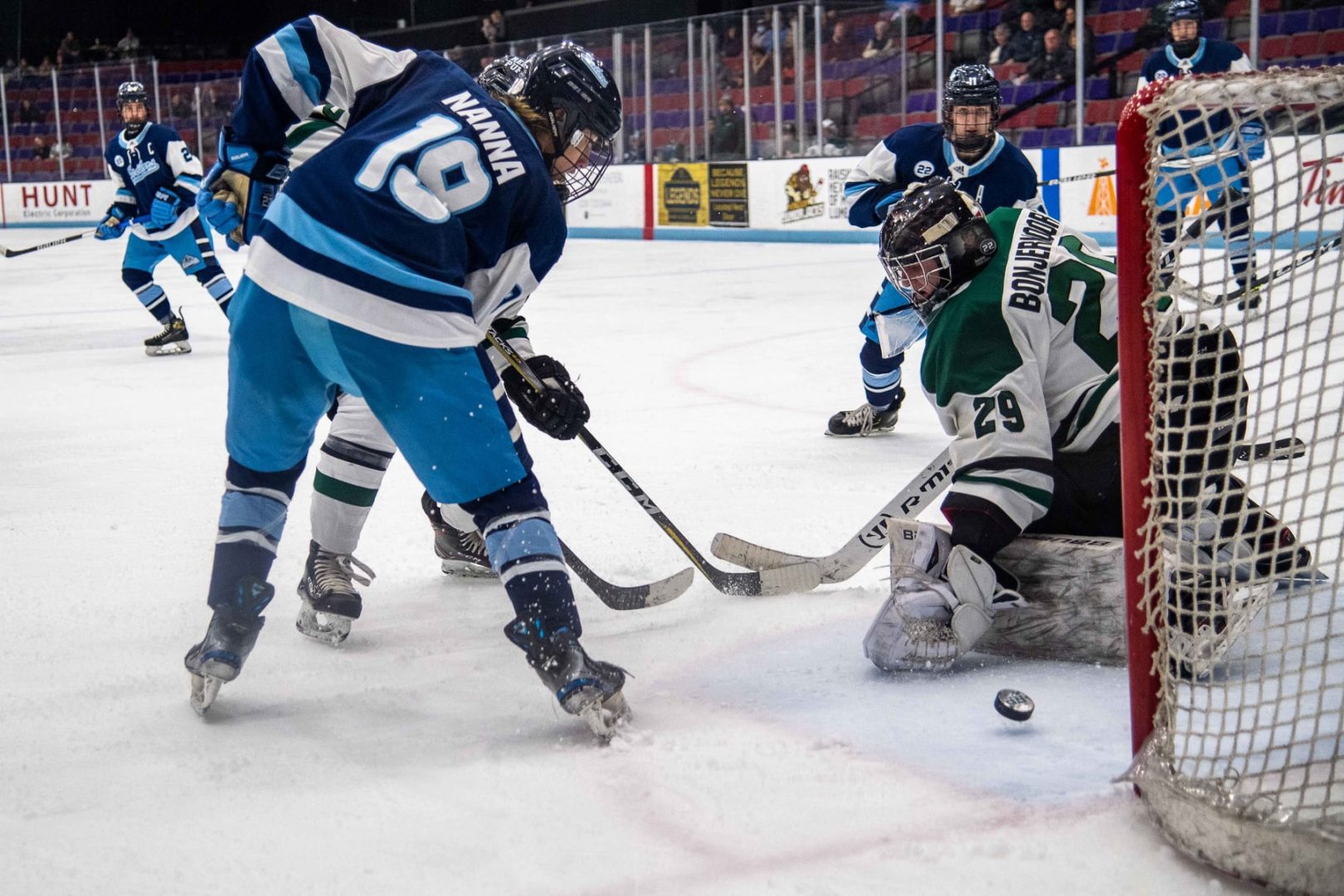 Mona Shores’ Jake Nanna watches a bouncing puck in front of the Reeths-Puffer net during a game early in the season. 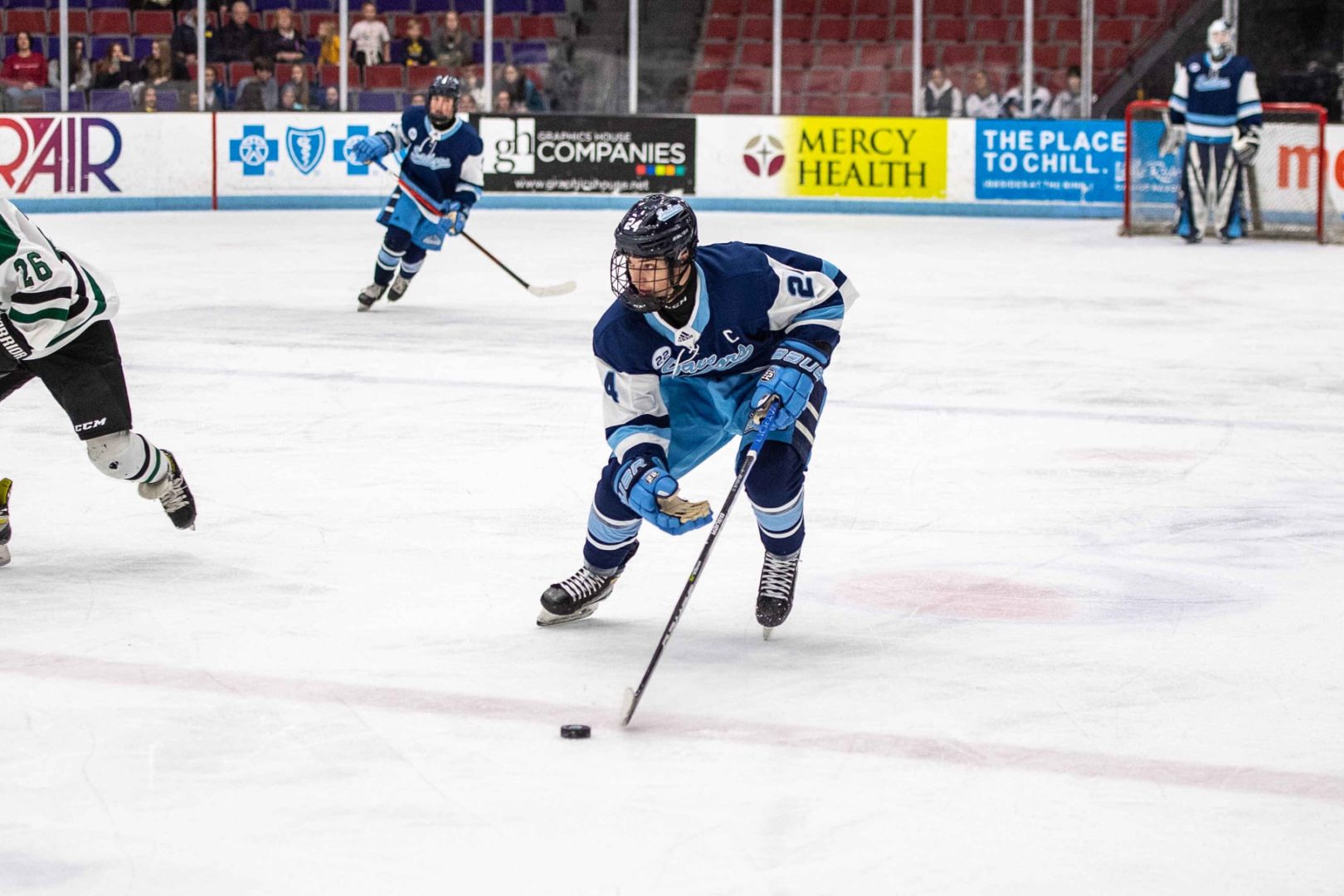 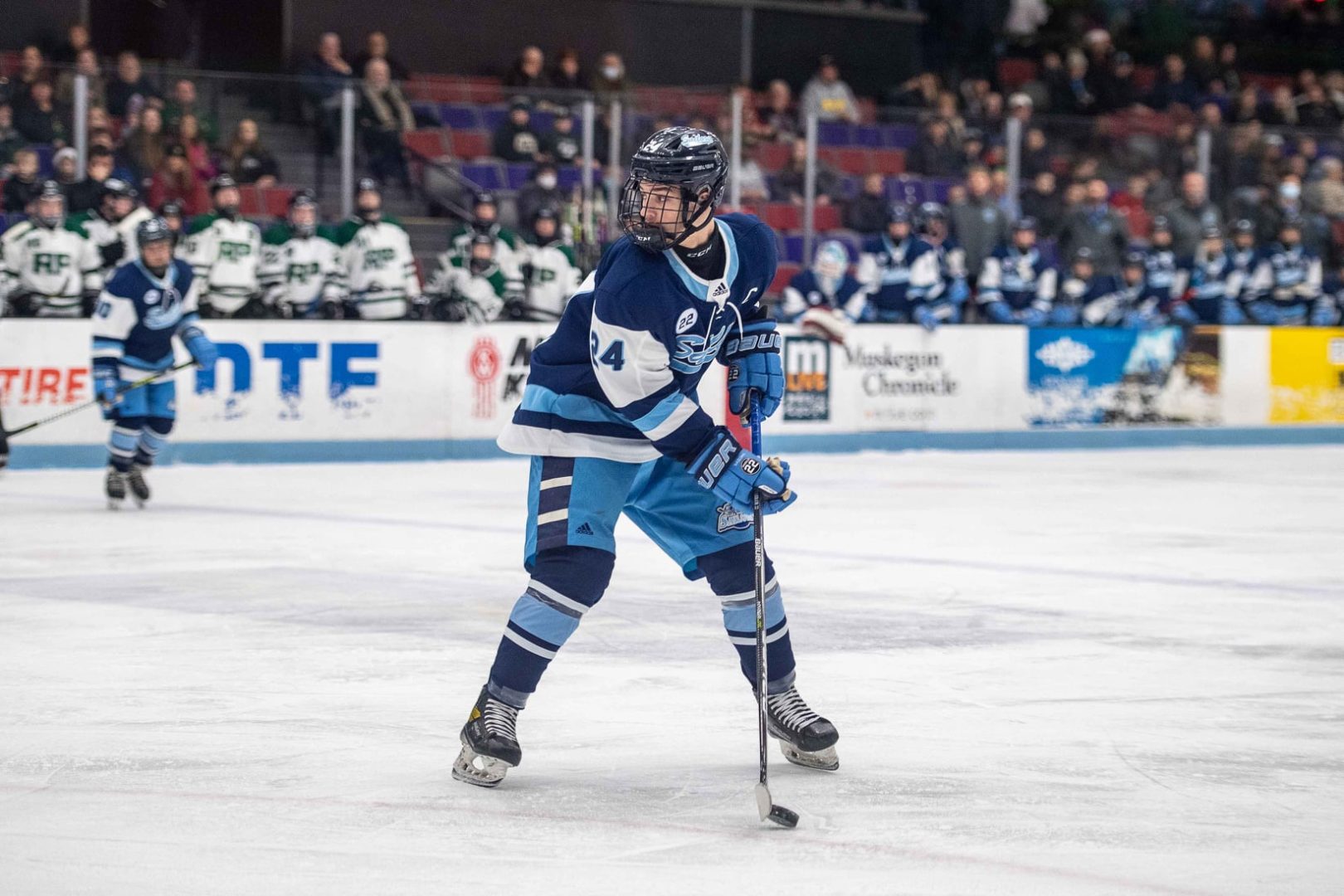 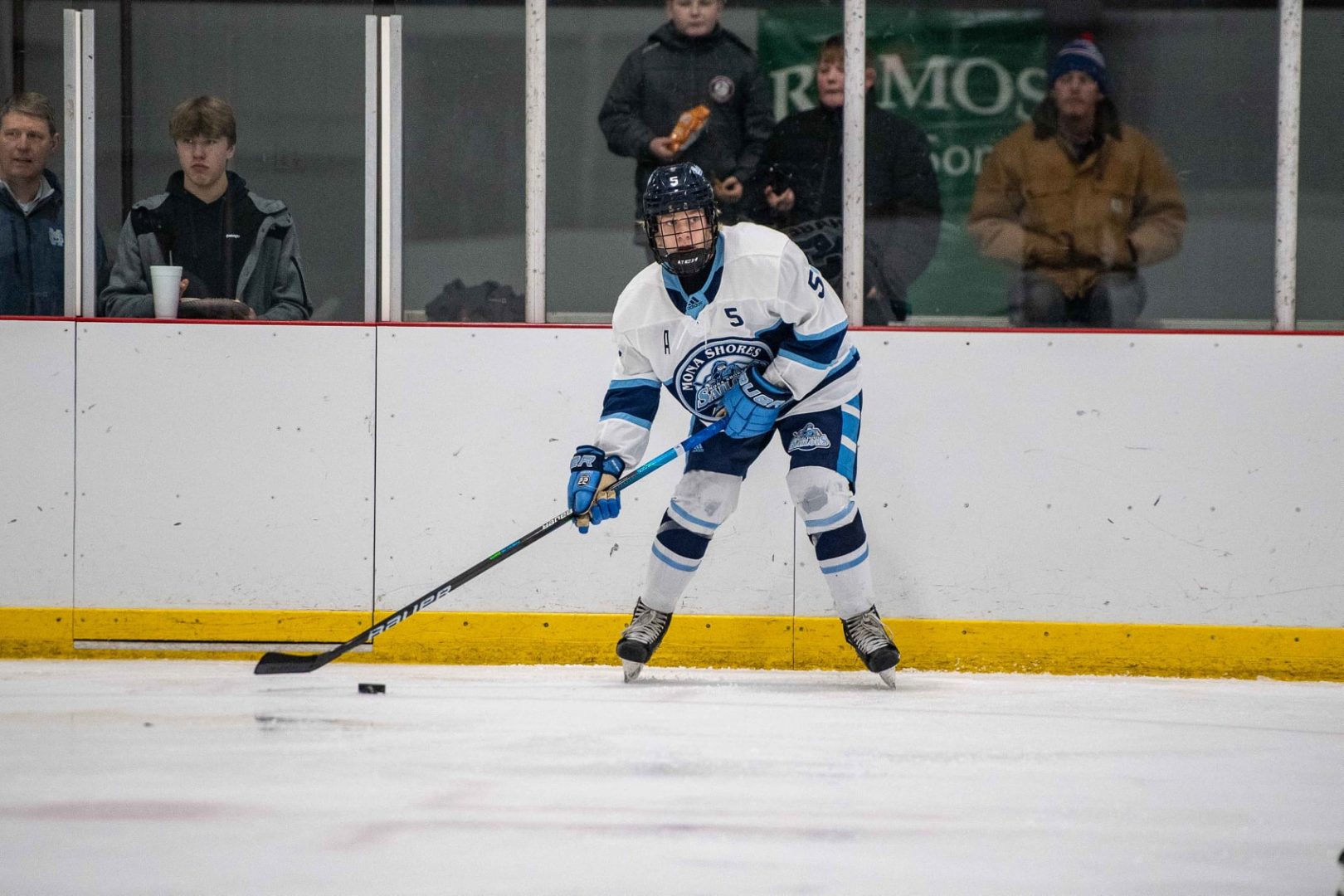 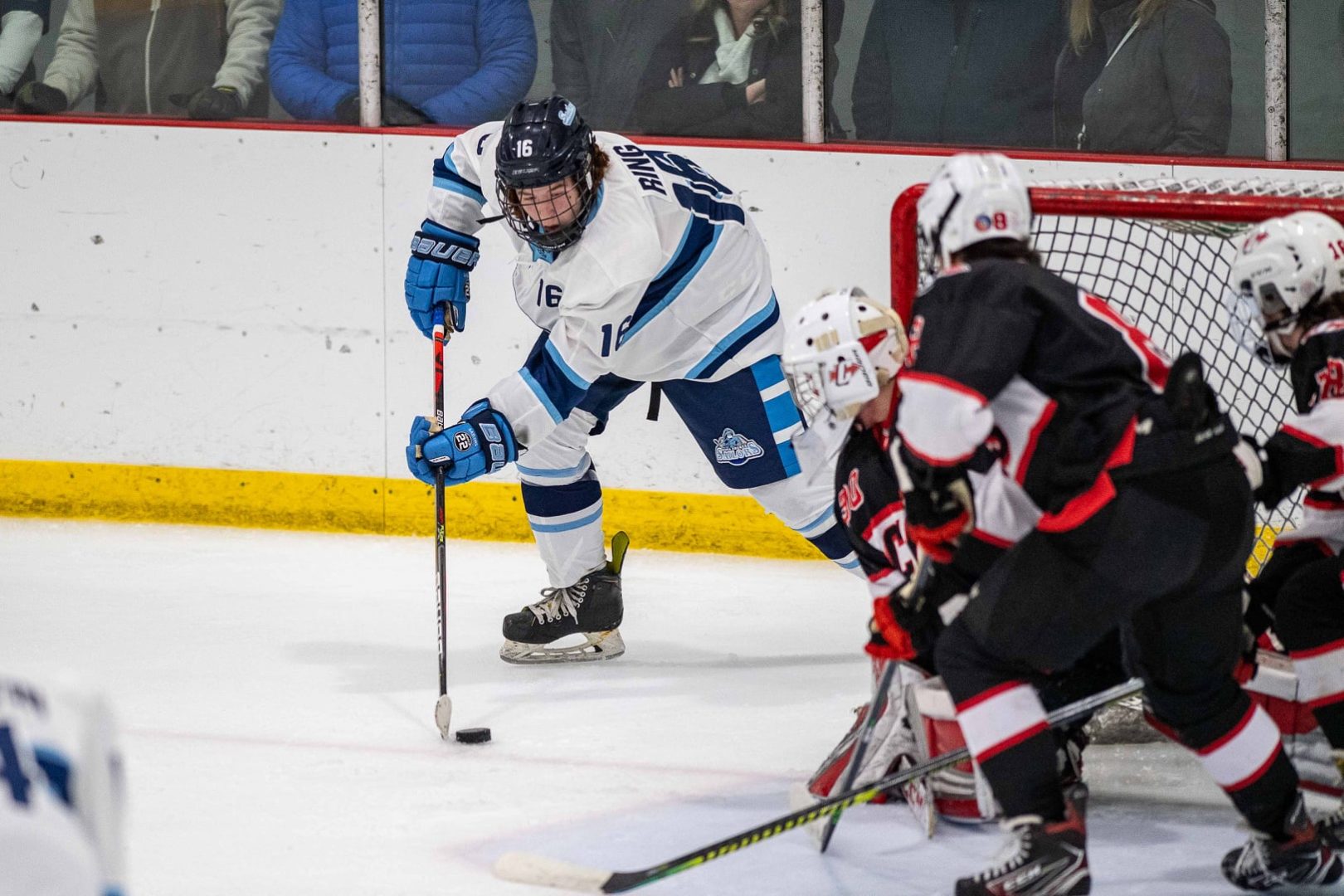 Ethan Ring manages the puck next to the net for Mona Shores. Photo/Eric Sturr 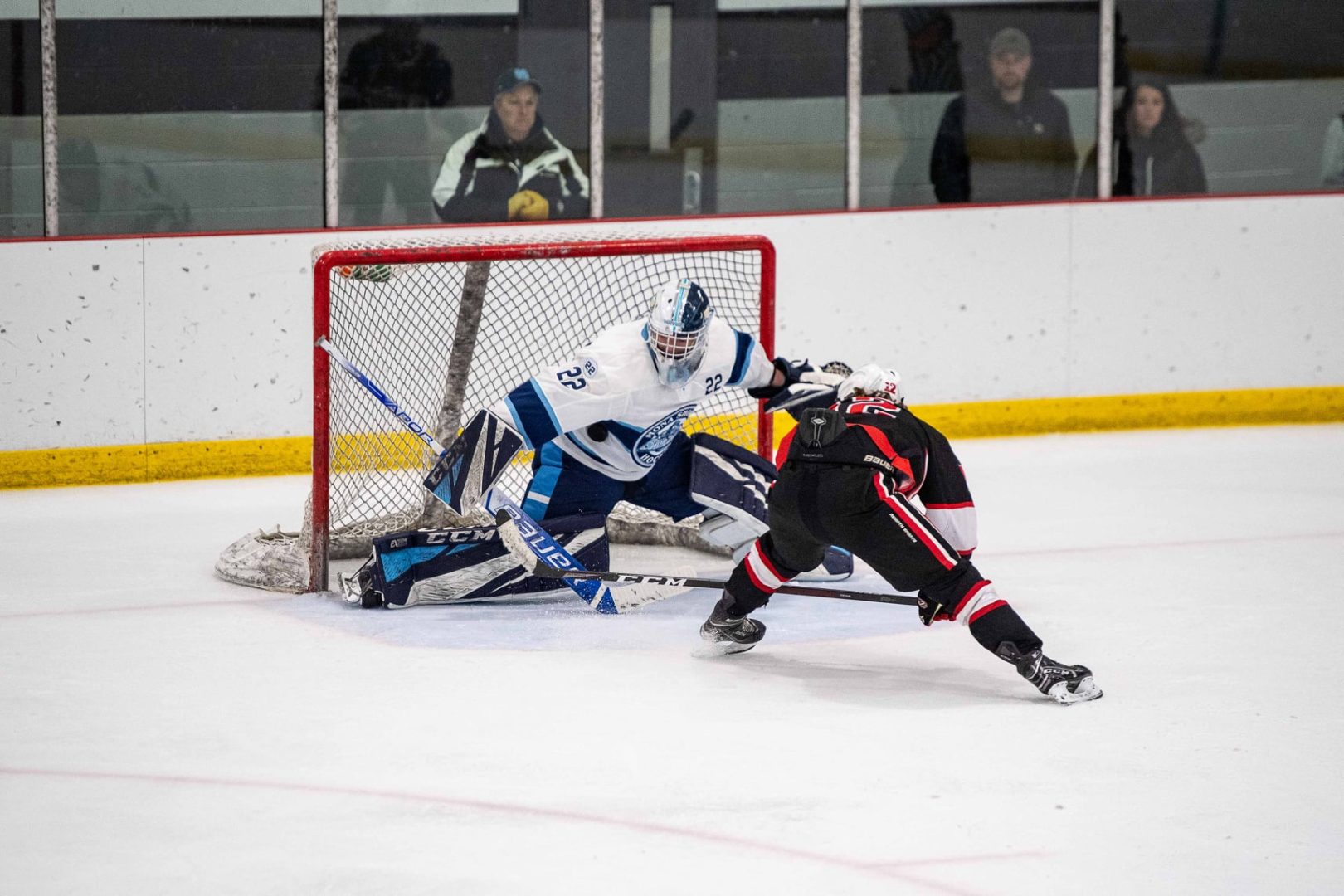 Carter Dethloff makes a save in goal for Mona Shores. Photo/Eric Sturr 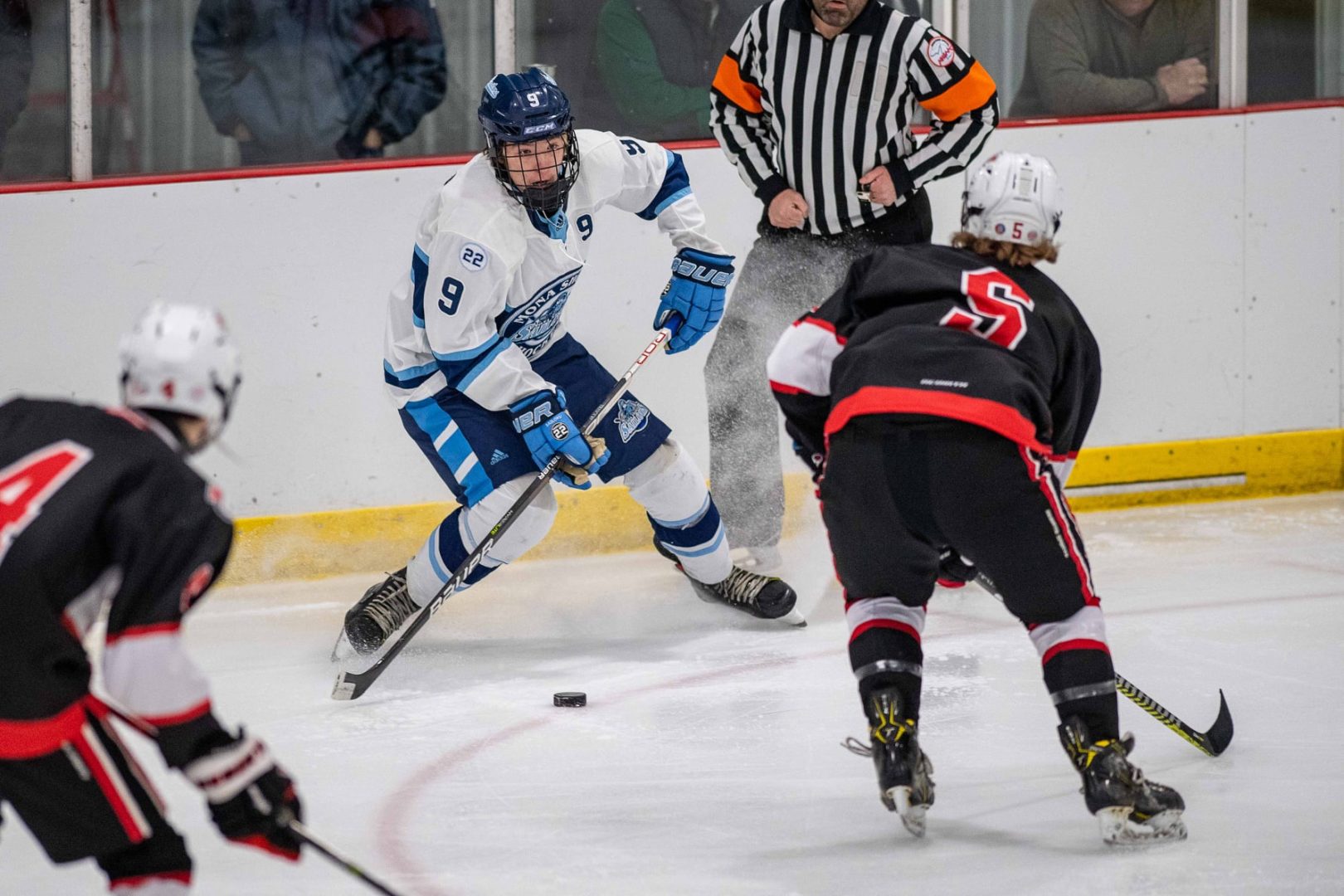 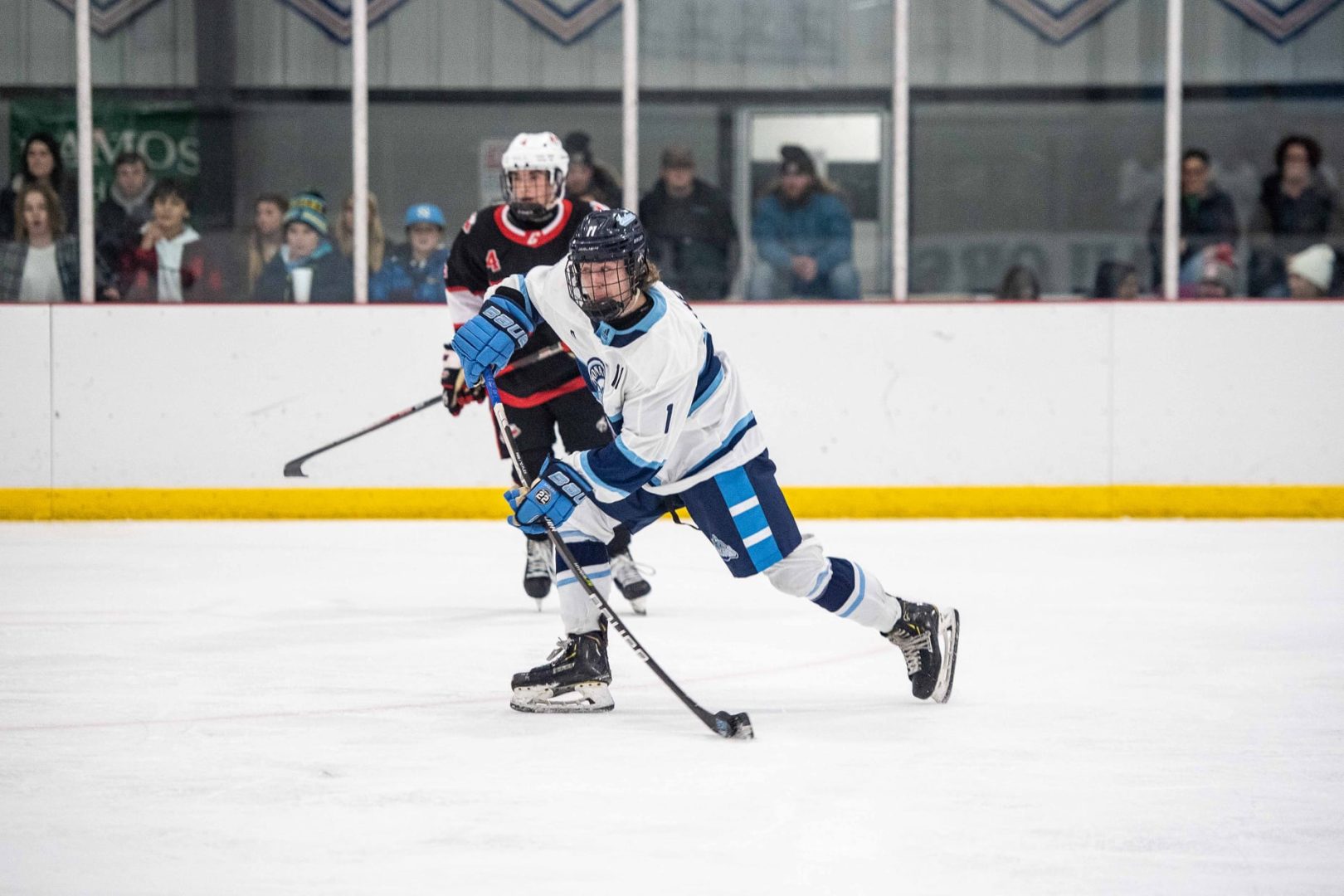 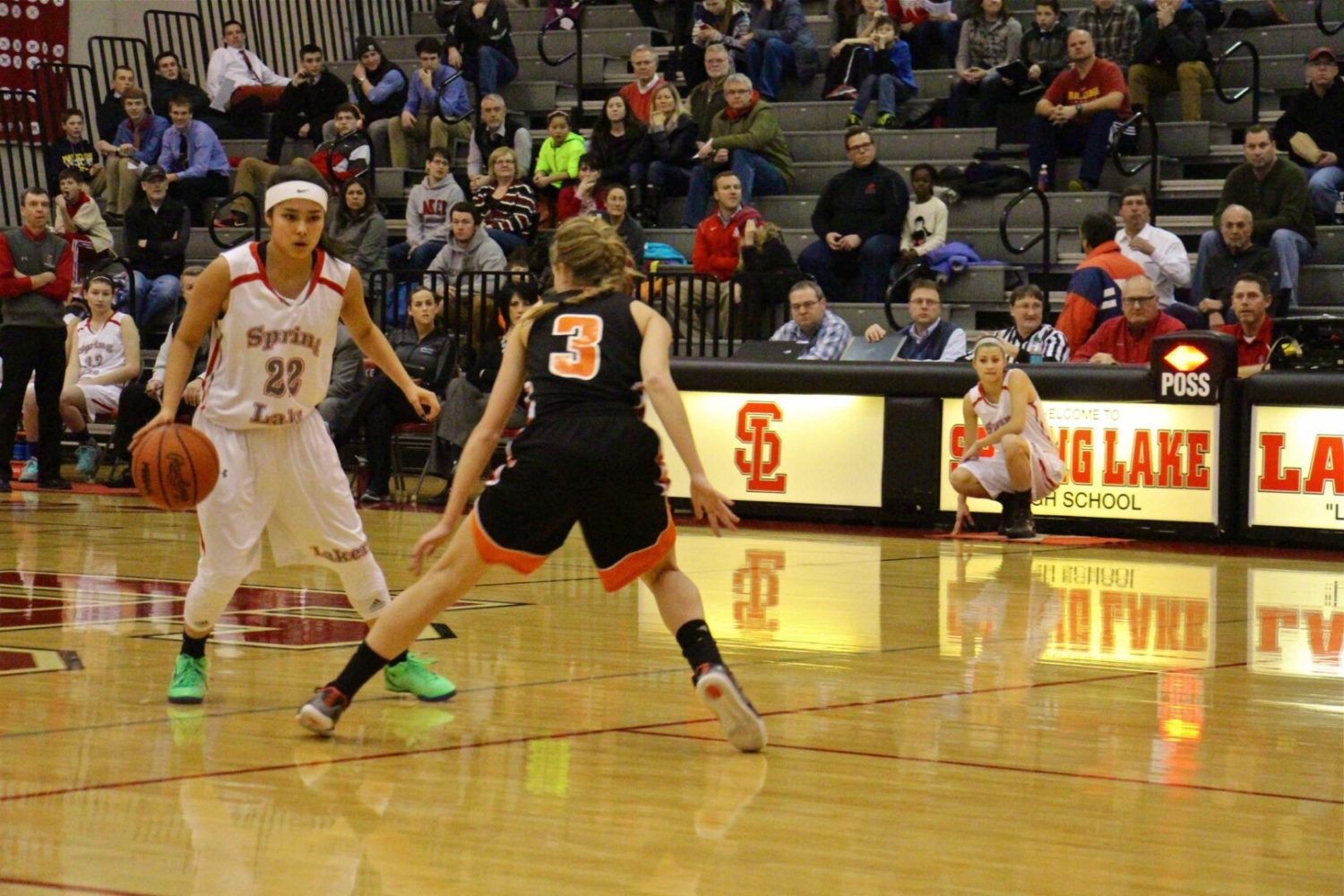