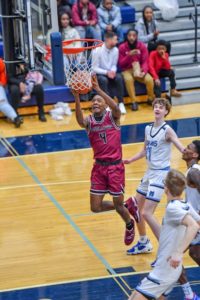 “I thought that Briggs should have been on the first team,” said Muskegon coach Keith Guy “and I feel the same way about Sydnor. I hope people start respecting them. They were the best back-court in the state of Michigan.”

The Grand Haven Buccaneers had a trio of starters selected to the honorable mention team.

Seniors Bashir Neely and Nic Stump along with junior 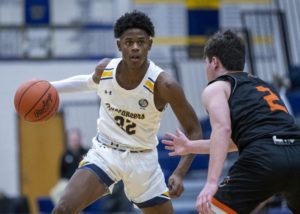 Harrison Sorrelle were all named to the all-state team. They led the Buccaneers to an 18-4 season record and a second-place finish in the OK Conference-Red behind Rockford.

“He (Neely) had a dominant senior season after improving significantly each of the past 3 seasons, said Grand Haven coach Greg Immink.

“His 19.2 points per game is the 10th highest single season scoring average in GHHS history.” Neely will continue his academics and basketball career at Grand Rapids Community College.

Stump was selected all-state honorable mention as a junior.

“Nic provided toughness in the paint and shooting from the perimeter,” Immink said. He led our team in rebounding, 3 point shooting and free throw shooting for the 2nd straight season. Stump will continue his academic and basketball career at Hope College.

Sorrelle was selected all-state honorable mention as a sophomore.

“Harrison spent much of the season playing through a significant injury, but was

still able to earn all-state honorable mention,” Immink said. “A long, athletic guard who can get to the paint or score from the 3 point line. A three year starter, he will be one of the top returning players in west Michigan.

Reeths-Puffer had two honorable-mention selections as sophomores Jaxson Whitaker and Travis Ambrose were voted in by the Associated Press panel.

Reeths-Puffer finished 13-8 under first-year head coach Nate Aardema and 9-5 in the OK Conference-Green. That was good for third place.“I am extremely happy for Travis Ambrose for earning honorable mention all state as a sophomore,” Reeths-Puffer coach Nate Aardema said. “He is a true student-athlete that has earned every bit of recognition he is getting. He is a pleasure to coach and will continue to do great things for our basketball program.”

“Jaxson Whitaker is very deserving of the honor of honorable mention all state,” Aardema said. “He is a very devoted athlete that excels in everything he sets his mind to. He’s already the best shooter I have ever coached and he’s only a sophomore. He is a great asset to our program.”