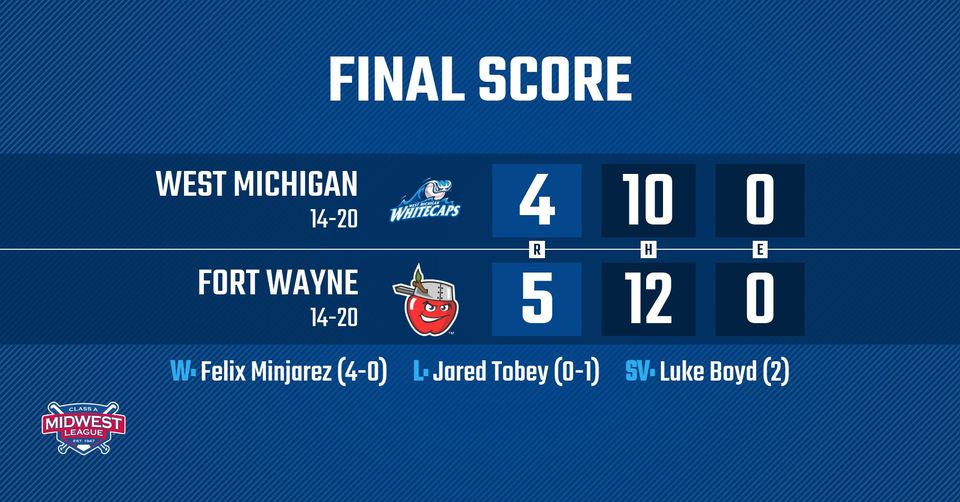 FORT WAYNE, IN – The West Michigan Whitecaps came up just short as part of a 5-4 loss to the Fort Wayne TinCaps in front of nearly 3,000 fans Tuesday at Parkview Field.

The back-and-forth contest saw West Michigan take the largest lead of the ballgame but was erased with TinCaps runs in each of the middle innings. The Whitecaps road record falls to an Eastern Division worst 5-11 this season.

Fort Wayne struck first when Jarryd Dale delivered a run on an infield single to give the TinCaps a 1-0 lead in the opening frame.

In the second, Wenceel Perez launched his team-best seventh home run on a deep drive down the right-field line to give West Michigan a 2-1 lead.

Fort Wayne responded with single runs in each of the following three innings. A fourth-inning RBI-triple by Ripken Reyes and a solo homer by Matthew Acosta sent the TinCaps out in front, heading into the seventh with a 4-3 lead.

Corey Joyce tied the game at four with a run-scoring single in the seventh before Angel Solarte followed with one of his own in the bottom of the frame to help Fort Wayne retake the lead, ending the scoring in the contest.

In the ninth, Corey Joyce kept the ‘Caps hopes alive with a two-out triple, but TinCaps outfielder Corey Rosier speared Colt Keith’s line drive down the left-field line to end the contest and give Fort Wayne the Tuesday victory.

Fort Wayne reliever Felix Minjarez (4-0) secured his fourth win of the season with two innings of one-run baseball, while Jared Tobey (0-1) suffers the loss in his first game back with West Michigan – part of a Minor League rehabilitation assignment.

Luke Boyd pitched a scoreless ninth for his second save of the season.

The Whitecaps fall to 14-20 and into a fifth-place tie with Fort Wayne at the same record. Joyce and catcher Josh Crouch posted multi-hit performances in a losing cause for the ‘Caps.

The West Michigan Whitecaps continue this six-game series against the Fort Wayne TinCaps Wednesday at 6:35 pm. Pitcher Keider Montero gets the start for West Michigan against lefty Jackson Wolf.

Broadcast coverage with Dan Hasty starts on the Whitecaps Baseball Network at 6:20 pm. Get your tickets for all 2022 home games now at www.whitecapsbaseball.com.