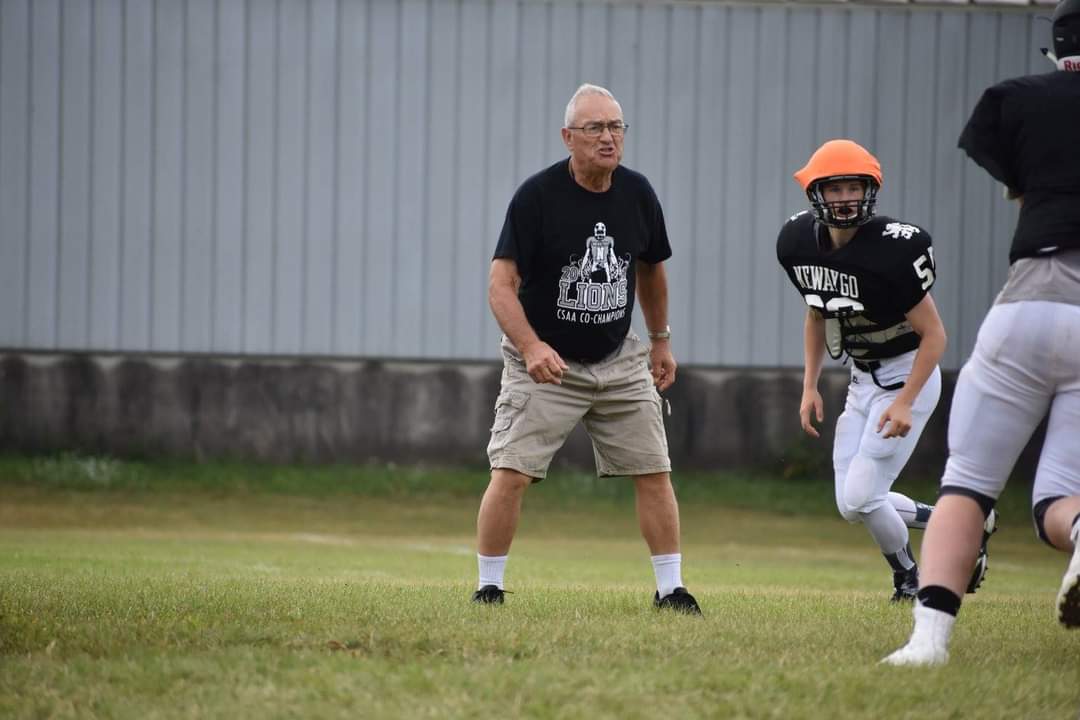 NEWAYGO--In a profession that features so much turnover, and longevity for more than 10 years is few and far between, Newaygo’s John Goodin definitely bucks the trend with coaching in high school athletics.

The Lions’ defensive assistant coach will be entering his remarkable 56th season of coaching high school football this fall, a career that began in 1967 as an assistant in Newaygo.

Goodin has donned just a couple other school colors during his illustrious career, as he later spent one year at Ravenna, before taking the head coaching position at Howard City Tri-County for 27 years. There, he enjoyed tremendous success, tallying a total of 153 wins.

“Those were my best teams,” Goodin, 81, admitted. “The Howard City job opened in ’73, and the year prior to that, they had (won just a single game). It was my goal to develop a winning program there. I remember one of our first practices our first year, we had only 12 kids come out. I thought to myself, ‘What in the world is going on?’

“But we ended up having some really good years over there.”

Goodin is being modest, as he transformed the Vikings into a dominant program, which included a 29-game winning streak that stretched from 1977 to 1981. It was snapped by Morley-Stanwood in the fourth game of the 1981 season, a 7-0 loss.

Statistically speaking, Goodin’s best team was in 1978, when his squad allowed opponents to score a total of just eight points throughout the season.

So it’s a shame Goodin’s teams didn’t play in modern day, because they never got to experience post-season glory.

“There was a points system back then, so our teams didn’t get into the playoffs,” Goodin said. “That’s just the way it was. Still, we felt we could have competed with anybody.”

Goodin said he’s always strived to instill in his players the traits that he developed throughout his life, which included working on his father’s farms during his youth and from his service with the United States Marines and National Guard.

Born in Lincoln, Ill., in 1940, Goodin’s father couldn’t afford to purchase more farmland in the state, so he moved his family to Pierson, where it was much cheaper and it allowed him to purchase a dairy farm.

Goodin attended Howard City High School, and after graduating in 1958, enlisted in the Marines, where his basic training was in Southern California, at Twintynine Palms in San Bernardino County. He later was stationed in Okinawa, Japan and finished back in Southern California at Camp Pendleton.

“You learn how to push, drive and motivate the kids; how to get the most from them. One of the key things I’ve been told is you strive to have to get the young people to want to bleed for you. Blood, sweat and tears as they say. Put it all on the line. Then of course, you try to build perspectives such as unity amongst themselves. That’s very important. And conditioning, you try to make them mentally strong, with a focus on attention to detail.”

After 3½ years with the Marines, Goodin said he worked second shift for two years at Wolverine Brass, before a local minister talked him into going to college. Goodin attended Olivet Nazarene University and later completed his graduate degree for a career in education from Central Michigan University. 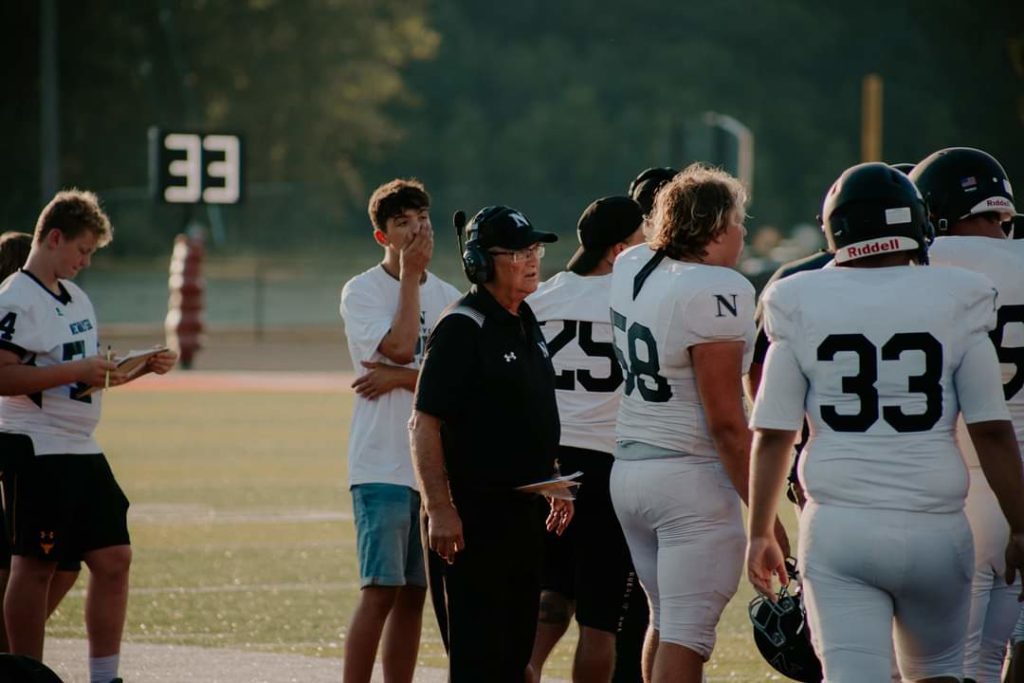 Goodin’s coaching was put on hold at Tri-County when the military called him back into duty during the stabilizing effort in Kosovo in western Europe in 1999. Although in his late 50s, Goodin still considered himself physically fit for duty as he traveled to the country as a member of the International National Guard.

“I worked in operations, mostly developing flight plans,” Goodin said. “I didn’t fly myself. When I turned 60, it was mandatory for me to retire, so that was the end of my military career.”

With his job vacated at Tri-County, Goodin returned to Newaygo as an assistant coach, where he’s roamed the sidelines and practice fields ever since. He said he’s been extremely fortunate to have the support of his wife of 34 years, Kathy, who even volunteered in the cafeteria during preseason football camps at Fort Custer near Battle Creek. Goodin and Kathy have raised five children, Mark, John Jr, Laurie, Lynette and Melanie, while Goodin has had the opportunity to coach four of his grandchildren while at Tri-County.

So the question remains, how has the passion for coaching burned for so long inside of Goodin?

“I think it’s the love of the game and what the game represents,” he said. “What I enjoy the most is working with young kids and seeing them make progress from one year to the next. I love that. And of course, being a part of developing them into the type of people they are today. That’s rewarding in itself.”

His rolodex of players he’s coached is literally in the thousands, but Goodin’s mind is incredibly sharp at recalling certain games, players or moments throughout his career. He mentioned his last quarterback at Tri-County, Phil Butler, who went on to have an outstanding playing career at Hope College. He still holds many of the school’s all-time passing records. While at Newaygo, Goodin also coached Joe Berger, who played at Michigan Tech and enjoyed a 13-year career in the National Football League as a center and guard.

Goodin said he’ll let current Newaygo coach and athletic director Mike Allison know when he’s ready to call it quits, but he’s not ready to hang up his whistle quite yet. Even now, with his 82nd birthday coming in July, Goodin is still at the weight room at Newaygo in the morning three days a week, shaping the next generation of student-athletes.

“I enjoy being active; it keeps me young,” Goodin said. “It all depends on my health. I’ve had both hips replaced and in my lower back and neck I’ve needed to have fused. So that’s limited how much I can do. I used to be a lot more hands-on, showing hand placement and blocking techniques.

“I want to retire when I feel I no longer have value to the program,” he added. “I don’t want to just hang on. But I can say, I still have a passion for it.” 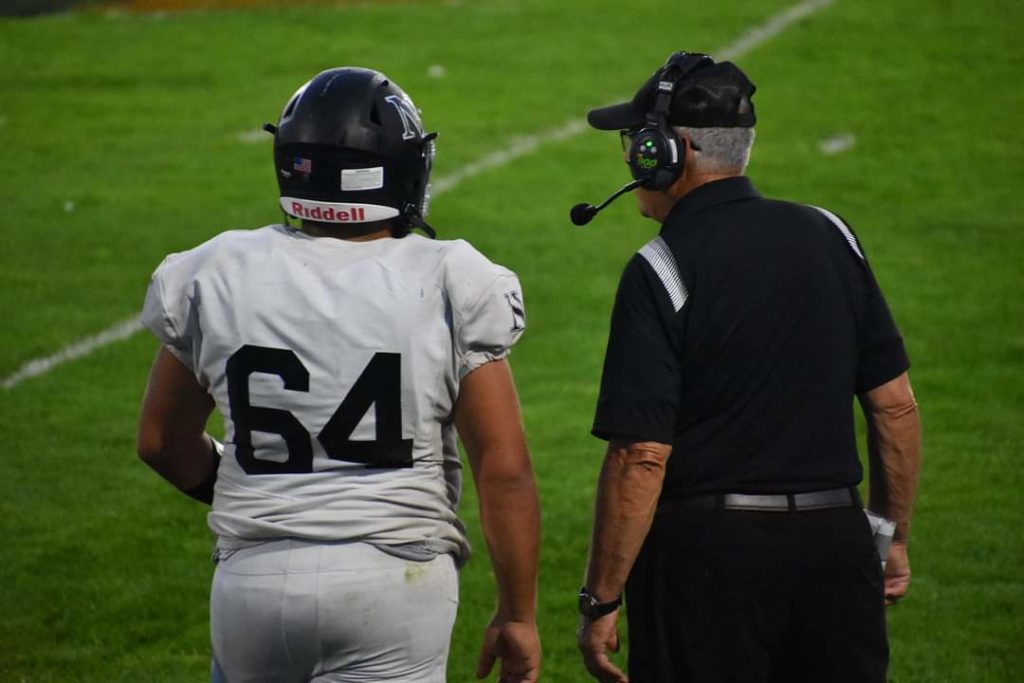