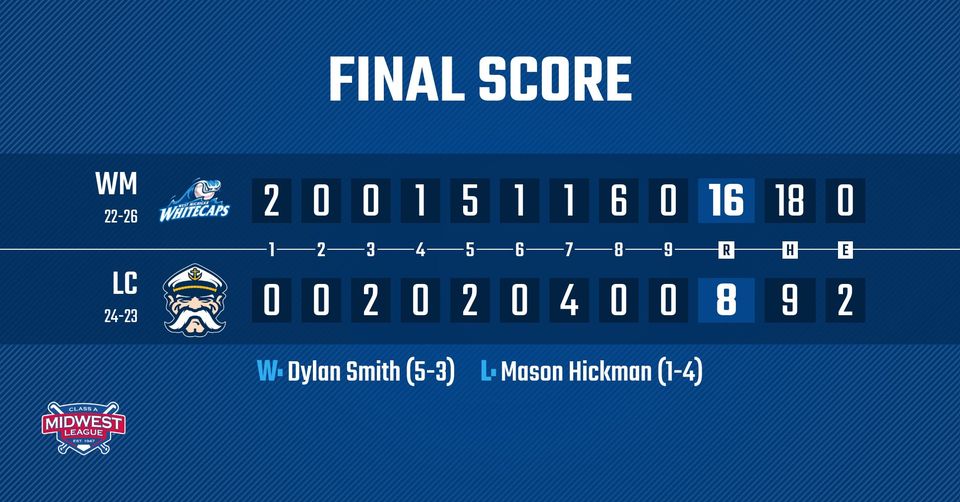 EASTLAKE, OH – The West Michigan Whitecaps blasted a single game-high six home runs as they put on their biggest offensive display of the season in a 16-8 rout of the Lake County Captains Thursday evening at Classic Park.

The Whitecaps set single-game records in home runs (6), hits (18), RBIs (15), runs (16), and extra-base hits (10) in the dominant win. Josh Crouch becomes the third Whitecap to hit a grand slam this season and the second in as many games, while Tigers #12 prospect Colt Keith enjoyed his first multi-home run game in the professional ranks.

Daniel Cabrera, playing in his first game with West Michigan since being assigned from Erie, homered on the first pitch of the game before Keith followed with his first home run, putting the ‘Caps on top 2-0 in the first inning.

Lake County tied the game in the third on a solo homer from Korey Holland before Jhonkensy Noel lifted a sacrifice fly, 2-2.

Ben Malgeri added an RBI-single in the fourth inning before West Michigan exploded for five runs in the fifth – featuring the grand slam from Crouch – to extend the lead to 8-2.

Lake County inched closer with a two-run bomb from Noel in the fifth before Keith and Bojarski added individual homers in the sixth and seventh frames increasing the advantage to 10-4.

Lake County stormed back in the seventh inning, plating four runs, highlighted by a two-run single from Angel Martinez, to trim the lead to 10-8.

The Whitecaps countered with their biggest inning of the series, plating six runs in the eighth as Jose King roped a three-run triple before Malgeri added the sixth home run of the night, 16-8.

Lake County failed to spark a rally as Gio Arriera and Elvis Alvarado combined for 2.1 shutout innings to close the book on the 16-8 victory.

The Whitecaps continue this six-game set with the Lake County Captains Friday at 7:00 pm. Detroit Tigers Top-10 prospect Ty Madden gets the start for the Whitecaps against the Captains Gavin Williams.

Broadcast coverage with Nate Wangler starts on the Whitecaps Baseball Network at 6:45 pm. Get your tickets for all 2022 home games now at www.whitecapsbaseball.com.