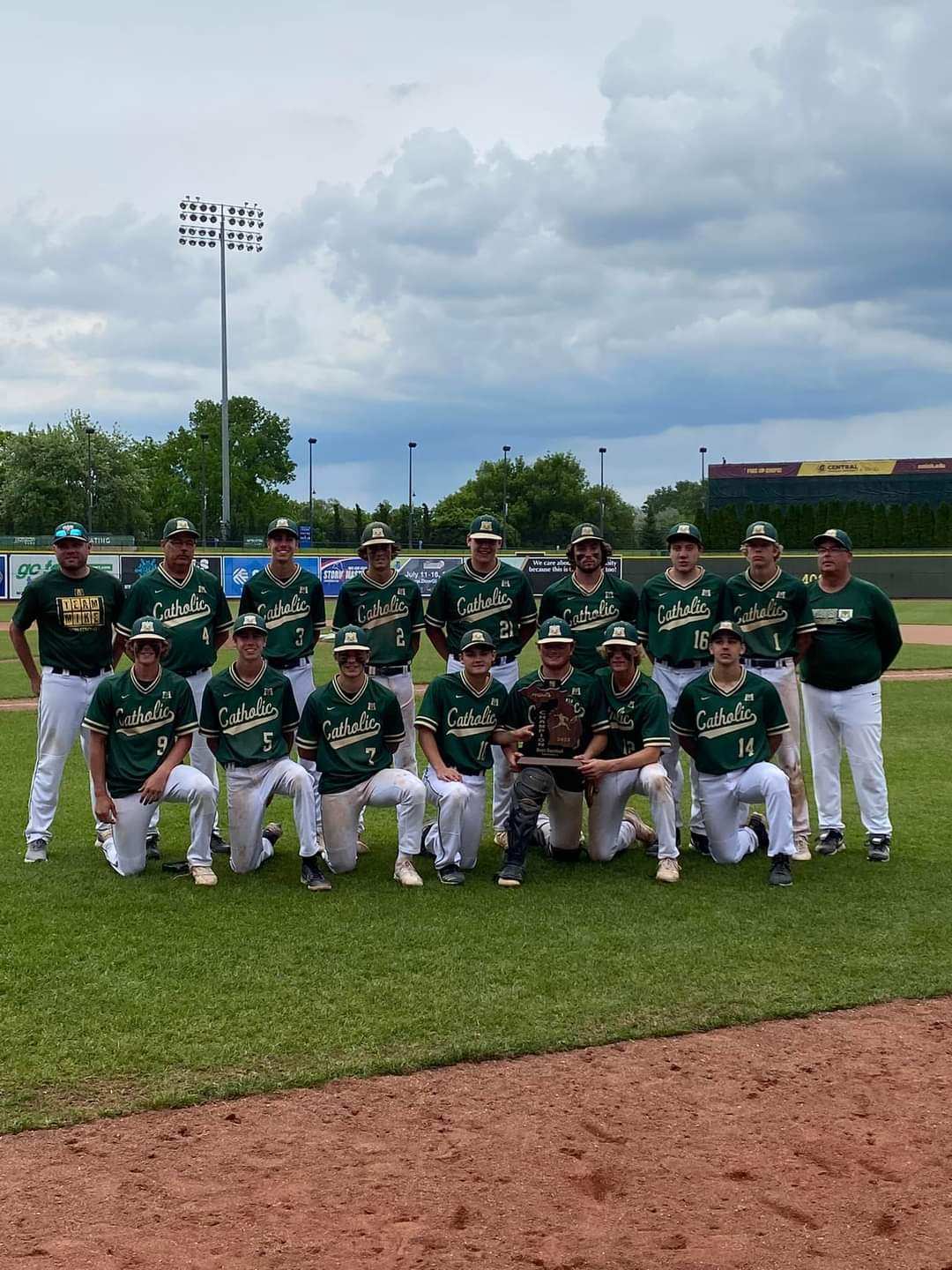 But the Crusaders scored only one more time and ended up losing to the Aggies, 11-6, in the MHSAA Division 4 state quarterfinals to see their season come to an end.

The Crusaders scored two runs in the fourth on three straight hits by Braden Gustin, Dewey Modaff and Sam Convertini.

In the fifth the Crusaders pushed across three runs. Bryan Convertini had a double, followed by another hit from Modaff and one from Croix Klint.

Catholic Central actually had runners on second and third with two out in the fifth inning, but the Aggies second baseman made a diving catch of a line shot up the middle hit by Vince Szymanski.

Beal City answered with a four-run top of the sixth, though, to take a 9-5 lead. The Aggies added two runs in the top of the seventh.

Crusaders head coach Steve Schuitema said the Aggies starting pitcher was touching 90 miles per hour according to the radar gun which posted the numbers on the scoreboard.

But, the Crusaders knocked him out by the fifth inning.

“I was really proud of the kids for just standing in there and taking their hacks,” said Schuitema.

Sam Convertini took the loss on the mound.

Leading hitters for the Crusaders included Bryan Convertini with a hit and two RBI, Modaff with two hits and one RBI and Klint had one hit and two RBI.

“I could not have asked for our team to play any better,” said Schuitema. “It was a long day, it was warm out, the kids were tired playing really good times and just

“We just kept fighting. I’m just very proud of this team. They were up 5-0 after three, and I’m thinking ‘Well, let’s hang around and keep it close, and see what happens.’

“Goll darn if they didn’t start tagging that kid a little bit. They weren’t used to him. He had a ridiculously low ERA (earned run average). He’s a sophomore. He’s going to be a real talent.”

The Crusaders won the regional championship with a wild, 15-12 victory over a very good Dansville team whose starting pitcher is headed to Aquinas.

But he struggled with his control, and the Crusaders were able to get on him pretty early, scoring seven runs in the first inning to take a quick lead.

It only lasted one-half inning, as Dansville came back and scored seven in the second to tie things up, 7-7.

Dansville went ahead, 10-7 in the third.

The Crusaders answered with three runs in the fourth inning to tie the score again, 10-10.

Not so fast. Dansville rallied for a pair of runs to reclaim the lead, 12-10 in the sixth inning.

It would be the last time Dansville would hold serve.

Catholic Central rallied for five runs in the bottom of the sixth, and held on for the win.

“It was a very tight strike zone, and there were walks both ways,” said Schuitema. “It was difficult for both teams.”

Owen Lyonnais picked up the win in relief after coming out of the bullpen in the third and pitching 4 2/3 innings. He gave up only two runs on three hits. Modaff started the game.

Vince Szymanski had three hits, three RBI and scored three runs for the Crusaders. Modaff had two hits and Sam Convertini had one hit and three RBI.

“We had some really terrific plays made by Bryan Convertini all day long,” Schuitema added. “He played right and center field. He was just fantastic.”

Buccaneers get swept by West Ottawa in Tuesday baseball action