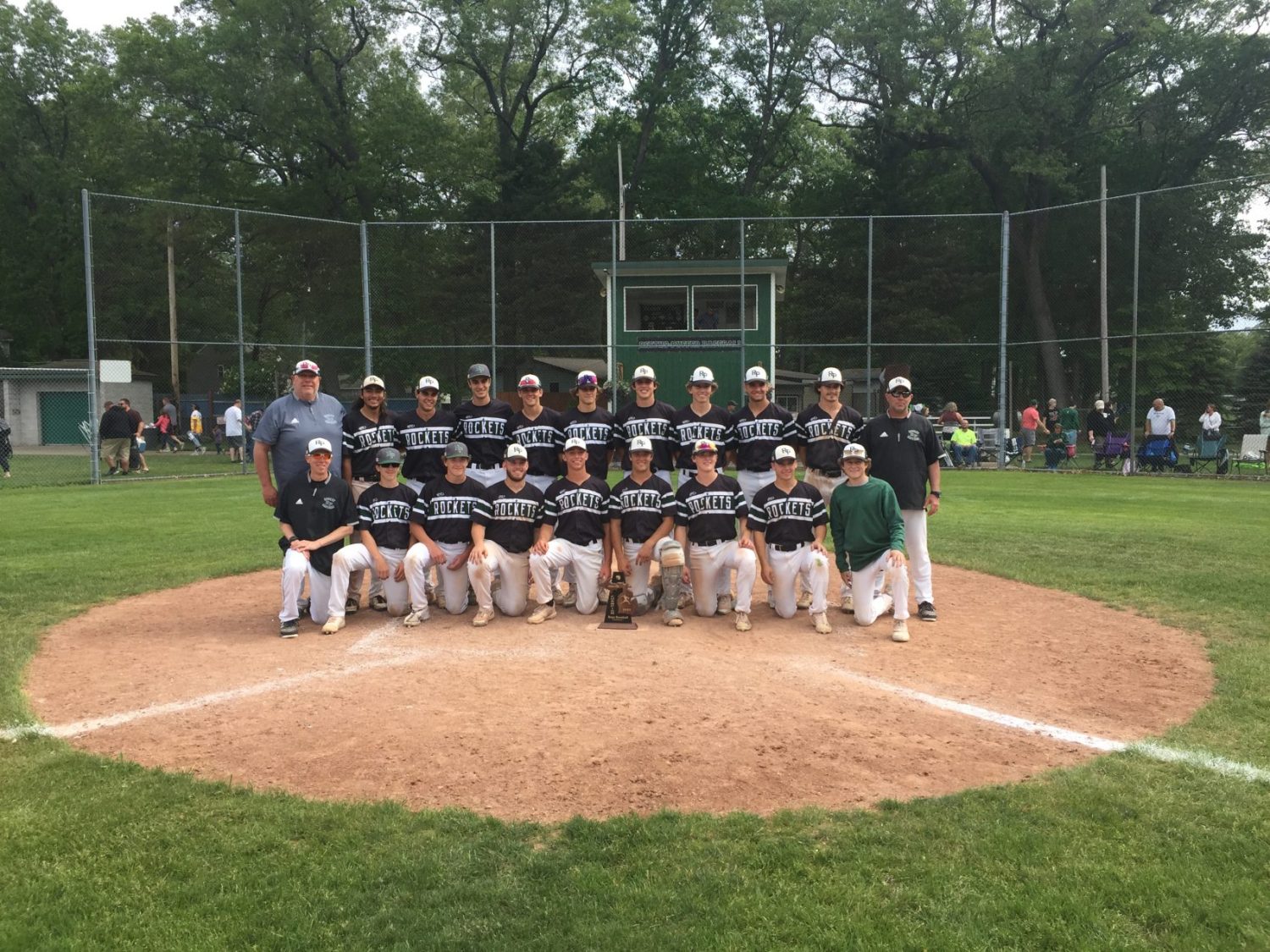 MUSKEGON–Coming into the MHSAA Division 1 district tournament Saturday on its home diamond an overwhelming underdog, the Reeths-Puffer baseball team pulled of a major shocker by rallying from a four-run deficit to knock off 5th–ranked Kenowa Hills, 7-6 in the championship game.

It was the Rockets’ second straight district title.

“Nobody gave us a chance. Nobody,” said an elated Reeths-Puffer coach Butch Attig. “We were (24-9) coming in and we had the third-best record. It says a lot about this team. This team is just resilient.

With a choppy start, the Rockets found themselves in a 6-2 hole.  Kenowa Hills used a pair of home runs from Jaiden Acker to put Puffer on its heels early on.

But, the Rockets, who had turned back another Top 5 team, Mona Shores, in the semifinals earlier in the day, appeared to be unfazed by the deficit and came storming back.

Scoring five runs in the fifth inning, the Rockets leaped back into the lead, 7-6 and then held the Knights scoreless the remainder of the game.

Kaden Edwards had two hits and drove in two runs for the Rockets. Also getting two hits apiece were Kyle Schlaff and Alex Orchard.

The Rockets opened a 4-0 lead on the 3rd ranked Sailors after the first two innings in the semifinals, and extended it to 5-0 with a single run in the bottom of the fifth.

Mona Shores shaved the Rockets’ lead down to two, 5-3, after scoring three runs in the sixth inning.

But, the Rockets weren’t to be denied and finished off the upset in the seventh inning against the OK Green champions.

Rocket senior pitcher Jordan Bochenek was able to silence the Sailors’ loaded lineup, holding them hitless over 4 2/3 innings. He finished the game with a three-hitter. He walked two, allowed three earned runs and struck out three. Jaxon Whitaker came on in relief and gave up just two hits and no runs in 1 1/3 innings.

Panozzo was a force at the plate for the Rockets, knocking in two runs on a pair of hits. Colby Mitchelson also contributed two hits and had one RBI.

“We had three goals this year,” Attig said. “One was a conference championship, two was the county tournament. We didn’t achieve those goals. All our energy went into this day, this specific day.

“We just beat two very, very, very good programs,” Attig said. “I’m proud of my kids. I just love every one of these kids and these seniors mean an awful lot to me.”

The Rockets move on to regional action at 5 p.m. Wednesday evening, June 8, when they travel to Cedar Springs to take on the Grand Rapids Forest Hills Northern Huskies at Cedar View Elementary.

The Huskies from the OK-White, advanced to the regionals on Saturday after defeating Cedar Springs 1-0. Forest Hills Northern will come into the contest with a 21-11 overall record.