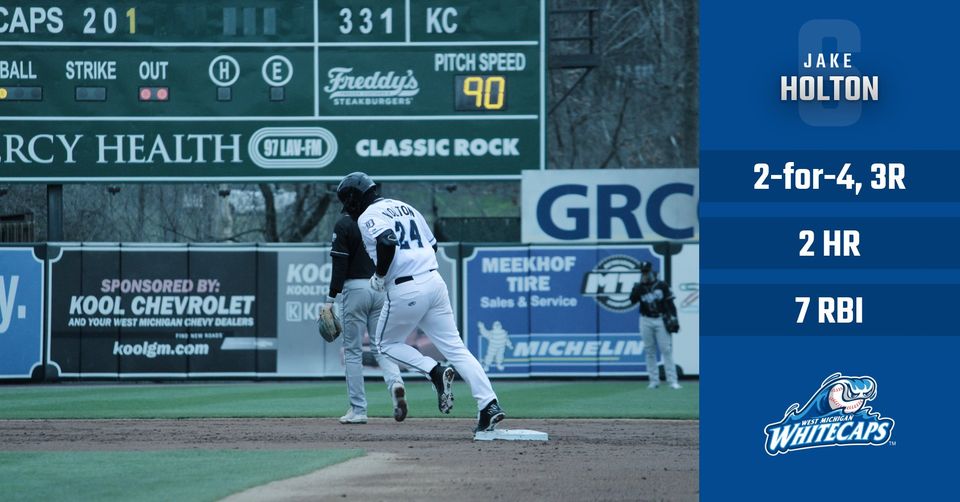 Holton, 24, went 3-for-4 with a walk, three runs scored, his eighth and ninth homers of the season, and seven RBI. The performance by Holton was last replicated by 2012 infielder, Aaron Westlake, on June 3 at Great Lakes.

Only one player in franchise history has collected more RBIs in a single game – Jeramy Laster – who drove in eight runs in a game played on August 8, 2008, at Alliant Energy Field against the Clinton LumberKings.

West Michigan landed the first punch in the back-and-fourth contest as Wenceel Perez delivered an RBI-Double to open first inning. Holton cracked a two-run single later in the frame to expand the ‘Caps lead to 3-0.

The Chiefs scored the subsequent six runs of the contest – highlighted by a four-run third inning against Detroit Tigers Top-10 prospect Dylan Smith. Two-run singles by Thomas Francisco and Tyler Reichenborn helped Peoria build a 6-3 advantage, chasing Smith from the contest after just 2.2 innings on the mound.

In the fifth, the Whitecaps loaded the bases for Holton, who launched his eighth home run and first grand slam of the season to flip the lead back to West Michigan at 7-6. After the Chiefs scored on a bases-loaded hit-by-pitch in the seventh to tie the game, Holton blasted his second homer of the contest with a 411-foot blast over the left-center field wall to give West Michigan what became the game-winning run and an 8-7 lead.

Reliever Elvis Alvarado recorded the final three outs in collecting his third save of the year as the ‘Caps rode Holton’s hot bat to a Tuesday victory.

Hendry Nunez (2-1) preserves his second win of the season with two scoreless innings in relief, while Gianluca Dalatri (0-2) gave up Holton’s homer in the ninth to suffer his second loss of the 2022 campaign.

The Whitecaps improve to 27-31 while the Chiefs record falls to 25-33. Holton was mired in a 2-for-31 slump in nine games to begin the month of June before his historic performance on Tuesday. The first-pitch temperature was 95 degrees with a real feel of 108 degrees – the highest for any ‘Caps game this season.

The Whitecaps continue this six-game series with the Peoria Chiefs at Dozer Park with a Wednesday matinee at 12:05 pm. Pitcher Ty Madden, a Detroit Tigers Top-10 Prospect, takes the mound for West Michigan against the Chiefs Austin Love.

Broadcast coverage with Dan Hasty starts on the Whitecaps Baseball Network at 11:50 am. Get your tickets for all 2022 home games now at www.whitecapsbaseball.com.

Warriors get 21 hits as they sweep doubleheader from Manistee