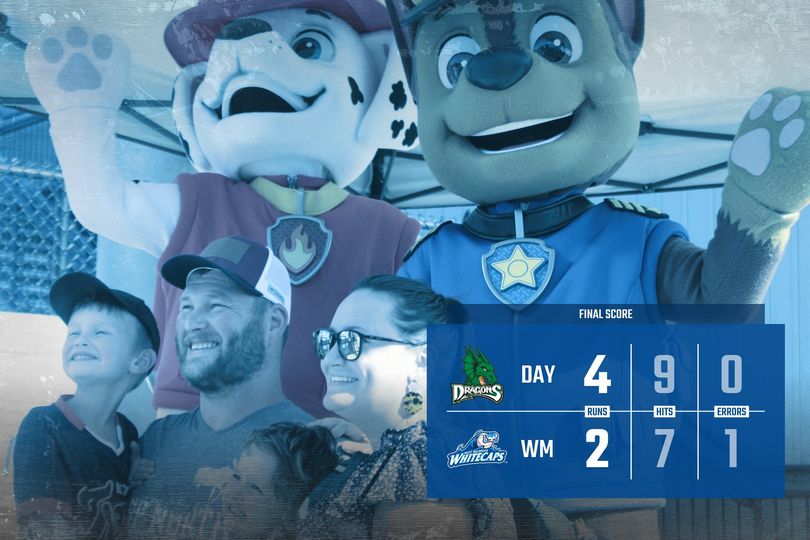 COMSTOCK PARK – The West Michigan Whitecaps failed to convert on solid pitching from Joey Wentz and Brant Hurter as they fell to the Dayton Dragons 4-2 in front of 7,858 fans Friday night at LMCU Ballpark.

Detroit Tigers No. 10 prospect Wentz tossed two innings while allowing one run in his rehab start, as he combined with Hurter to allow just two runs through 7.1 innings pitched with 11 strikeouts. Meanwhile, the Whitecaps finished 2-for-9 with runners in scoring position while leaving ten runners on base in the narrow defeat.

Dayton struck first in the second inning as Quin Cotton scored Jose Torres on a squeeze bunt to take a 1-0 lead.

Torres added to the lead in the fourth with an RBI single before West Michigan responded with two runs in the bottom half – highlighted by an RBI double from Austin Murr – knotting the game at 2-2.

Dayton reliever Jacques Pucheu silenced West Michigan through the middle innings, allowing just one hit through 3.1 innings pitched. The ‘Caps advanced runners into second and third base in the eighth inning but couldn’t capitalize, as Dayton left runners stranded on the corners in the bottom half, keeping the game tied at 2-2 going into the ninth.

The Dragons broke the tie in the top of the ninth as Brian Rey smashed a two-run double to forge Dayton in front 4-2. West Michigan brought the tying run to the plate in the ninth but failed to convert as closer Braxton Roxby closed the door with a scoreless inning to earn Dayton the 4-2 victory.

Pucheu (1-1) collected his first win as Roxby secured his third save. Fernander (2-1) suffered his first loss, allowing two runs with a pair of walks through one inning pitched.

The Whitecaps lost two consecutive games at home for the first time since May 27-28 against Dayton.

Brant Hurter ties the single game-high in strikeouts with eight, last accomplished by Carlos Guzman, who struck out eight batters against the Great Lakes Loons on opening day.

The Whitecaps play the fifth game of this six-game contest at LMCU Ballpark as they take on the Dayton Dragons Saturday at 6:35 pm. Lefty Jack O’Loughlin faces right-hander Joe Boyle for West Michigan and Dayton. Broadcast coverage starts on the Whitecaps Baseball Network at 6:20 pm.