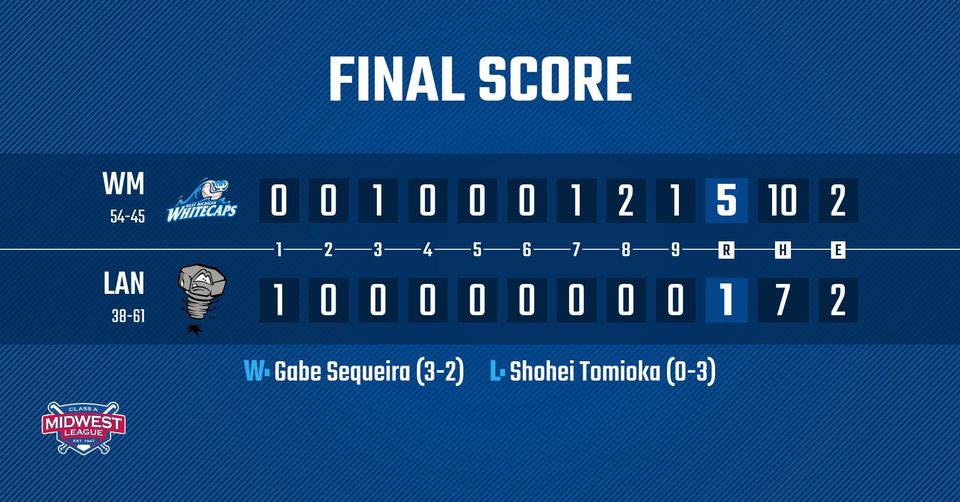 LANSING – The West Michigan Whitecaps enjoyed a two-homer game from infielder Corey Joyce as they charged ahead in the late innings to collect a 5-1 win over the Lansing Lugnuts in front of 6,509 fans on Thursday night at Jackson Field.

Joyce, playing part of his third season in West Michigan, tied the game with a solo homer in the third inning with a towering shot to left field before delivering an opposite-field blast, giving the ‘Caps an insurance run and conclude the scoring in the contest. His homers were his eighth and ninth of the season. Dating back to July 23, nine of Joyce’s last ten base hits have gone for extra bases.

The Lugnuts took the early lead, plating a run on an RBI-single from Jared McDonald in the first.

The score remained the same until the third, when Joyce cracked the first of his two home runs.

Beyond that, both starting pitchers in Keider Montero for West Michigan and Joey Estes for Lansing, were equally effective, tossing five innings and allowing just one run.

The game remained deadlocked until the seventh, when Jose King belted a 3-2 pitch with two outs over the right-center field wall for a solo home run, giving West Michigan a 2-1 lead.

In the eighth, back-to-back RBI-doubles from Josh Crouch and Trei Cruz provided a pair of insurance runs and a 4-1 advantage.

Whitecaps reliever Gabe Sequeira (3-2) tossed 1.1 scoreless innings out of the bullpen, notching his third win of the season, while pitcher Shohei Tomioka (0-3) suffered his third loss after allowing the King’s homer in the seventh.

The Whitecaps currently hold a three-game lead over the Great Lakes Loons for first place in the Midwest League East second-half standings. The Whitecaps improve to 54-45 and 23-10 in the second half.

The Lugnuts fall to 38-61 and 13-20. Joyce, Crouch, and Austin Murr each recorded multiple hits at the plate, while the ‘Caps bullpen of Sequeira, Dario Gardea, and Andrew Magno combined for four innings of two-hit, shutout baseball while striking out seven batters. Gardea tossed 1.2 scoreless frames, giving him 13.2 consecutive scoreless innings.

The Whitecaps continue this six-game series against the Lansing Lugnuts from Jackson Field on Friday at 7:05 pm.

Detroit Tigers Top-30 Prospect Brant Hurter gets the start for West Michigan against righty Jake Walkinshaw for the Lugnuts.