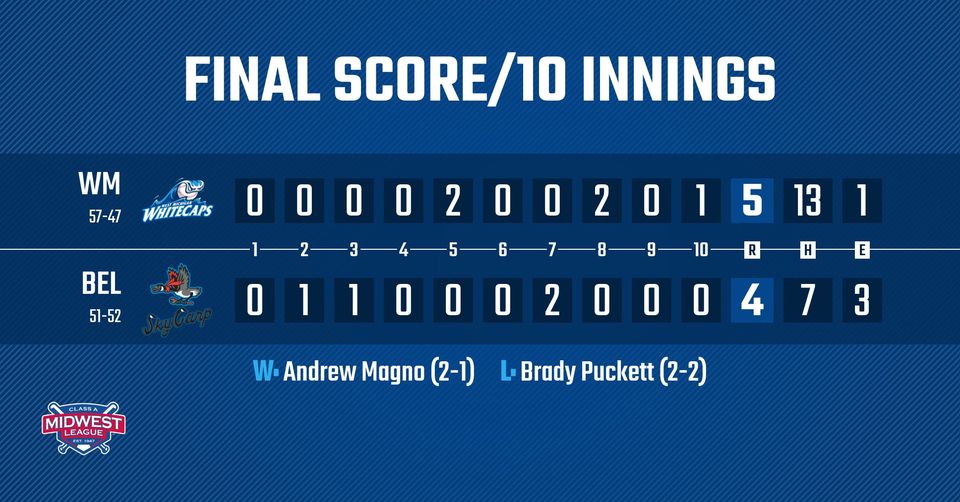 BELOIT, WI – The West Michigan Whitecaps rallied from two different two-run deficits and took their first lead of the ballgame on a go-ahead RBI-single from Esney Chacon in the tenth inning as part of a 5-4 win over the Beloit Sky Carp on Wednesday at ABC Supply Stadium.

Chacon, who stranded five runners on base in his first two at-bats, came through with base hits in each of his final two at-bats, including the tenth-inning single to send West Michigan to its first-ever win at Beloit’s brand new stadium.

In the fifth, West Michigan tied the game after Jake Holton scored on a wild pitch before Josh Crouch tied the game with a run-scoring single to knot the game at two.

The game remained tied until the seventh when the bottom of the Beloit lineup took the lead against ‘Caps reliever Jared Tobey.

Federico Polanco opened the frame with a single before Jose Estrada hit his second homer in professional baseball to give the Sky Carp a 4-2 lead.

The Whitecaps rallied in the eighth by taking advantage of a throwing error from Polanco that allowed two runs to score, bringing the score to a 4-4 tie.

The game progressed to extra innings, where Esney Chacon delivered a go-ahead RBI-single to give West Michigan their first lead of the contest, 5-4.

Andrew Magno, who entered to pitch a perfect ninth, stranded the tying run at third base, culminating in a strikeout of Bennett Hostettler to give West Michigan its first win of the series.

Jace Jung enjoyed his first three-hit game in the professional ranks, going 3-for-5 at the plate. Meanwhile, Trei Cruz reached base four times, and Carlos Mendoza stroked a pair of singles to go along with a walk before being pulled from the game with a foot injury in the tenth inning.

This six-game series between the Whitecaps and Beloit Sky Carp continues from ABC Supply Stadium on Thursday at 7:35 pm.

Brant Hurter gets the start for West Michigan against right Even Fitterer for Beloit.

Broadcast coverage starts on the Whitecaps Baseball Network at 7:20 pm.