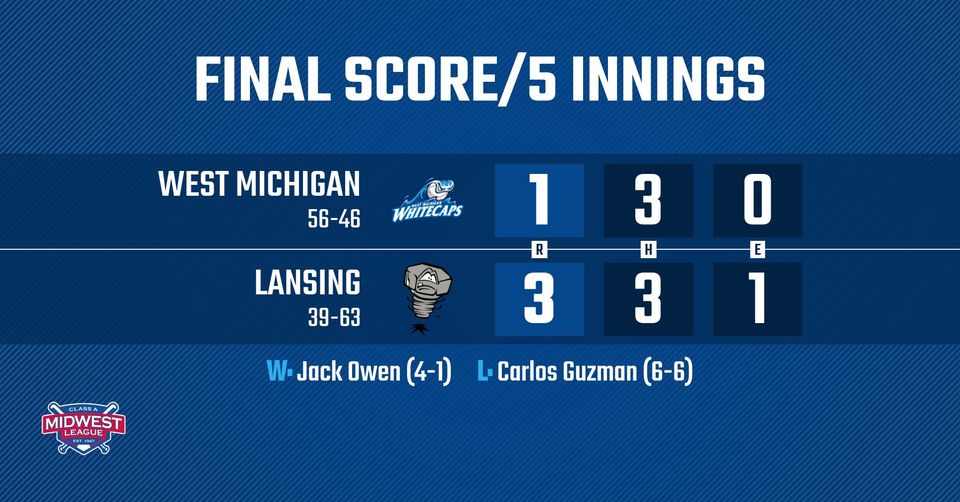 LANSING – A franchise record-low 67 minutes of baseball was played on Sunday at Jackson Field as a rain-shortened contest watched the West Michigan Whitecaps drop their series finale in just five innings to the Lansing Lugnuts by a score of 3-1.

With a thunderstorm approaching, the Whitecaps and Lugnuts moved quickly through Sunday’s five and a half innings of baseball. The game time of one hour and seven minutes marks the fastest official game in Whitecaps history, breaking the previous record of one hour and 19 minutes on May 10, 2003, at Cedar Rapids.

The offense was limited due to time constraints on Sunday, as Lazaro Armenteros blasted his ninth homer of the season to give Lansing a pair of runs in the second.

The score remained the same until the fifth, when Trei Cruz brought West Michigan within a run with an RBI-single, but Jace Jung popped out to end the threat in what became the last chance for West Michigan.

The bottom of the fifth began just moments before the storm, and Brayan Buelvas blasted a solo home run – his fifth homer of the season – to extend the Lansing lead to 3-1 and conclude the scoring in the ballgame.

The Whitecaps begin a new six-game series away from home against the Beloit Sky Carp in West Michigan’s first-ever trip to ABC Supply Stadium in Beloit beginning Tuesday at 7:35 pm.

Starting pitchers for the contest are still to be determined. Broadcast coverage with starts on the Whitecaps Baseball Network at 7:20 pm.