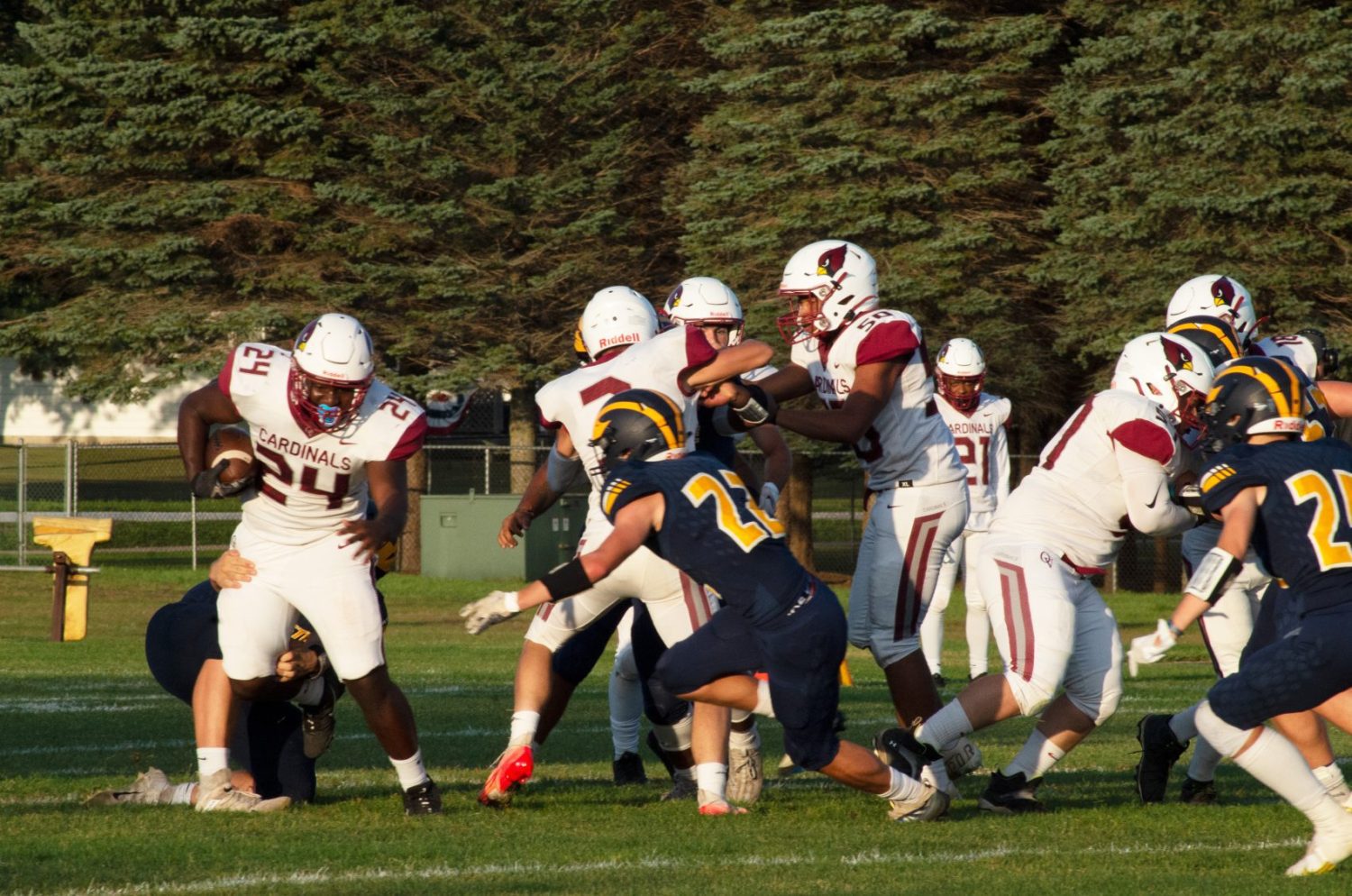 MANISTEE — The winless Orchard  View Cardinals pushed the Manistee Chippewas to the limit on Friday night.
Manistee, coming off a bitter loss to Oakridge last week, survived in the end and topped the Cardinals, 30-14 in a West Michigan Conference Lakes contest.
But, if you’d asked Chippewas head coach Troy Bytwork beforehand if he expected an easy game, he would have answered with a resounding “no!”
“There’s been very few times that we’ve played Orchard View, whether it be there or here, that it hasn’t been a quality ball game,” Bytwork said after the Chippewas had finally held off the feisty Cardinals with a big second half for the victory. 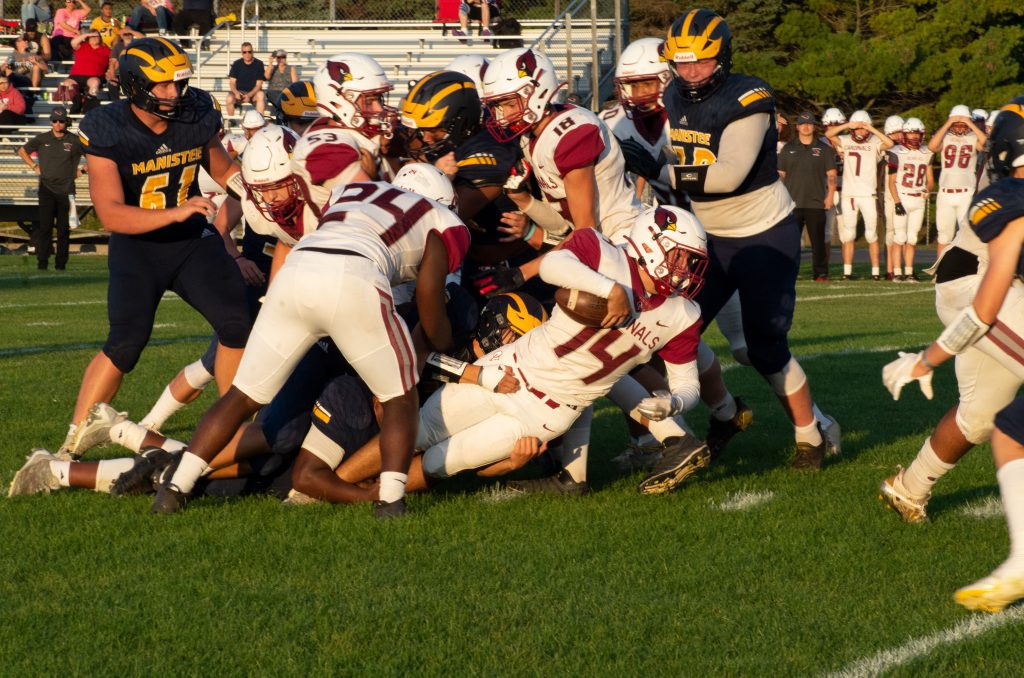 “Fred’s (Rademacher) an exceptional coach. They run their stuff really, really well and I’m not surprised. They were 0-3, but they’d played quality teams (Reed City, North Muskegon and Montague).
“You can’t expect that they’re not going to be good, and they gave us everything we could want. That was a hard fought football game. It obviously could not have been any tighter in the first half.”
Indeed not.
After the Chippewas finally broke through for a 66-yard touchdown scamper by Nick Hornkohl, the first of his two scores in the game, and quarterback Jeff Huber added the two-point conversion to send them into an 8-0 lead at 5:04 of the first quarter, the Cardinals came right back.
Junior halfback Enrique Gutierrez went off tackle and sliced into the end zone from four yards out with 1:47 left in the first and junior quarterback Stephon Oakes took in the two-point conversion for an 8-8 tie at the half. 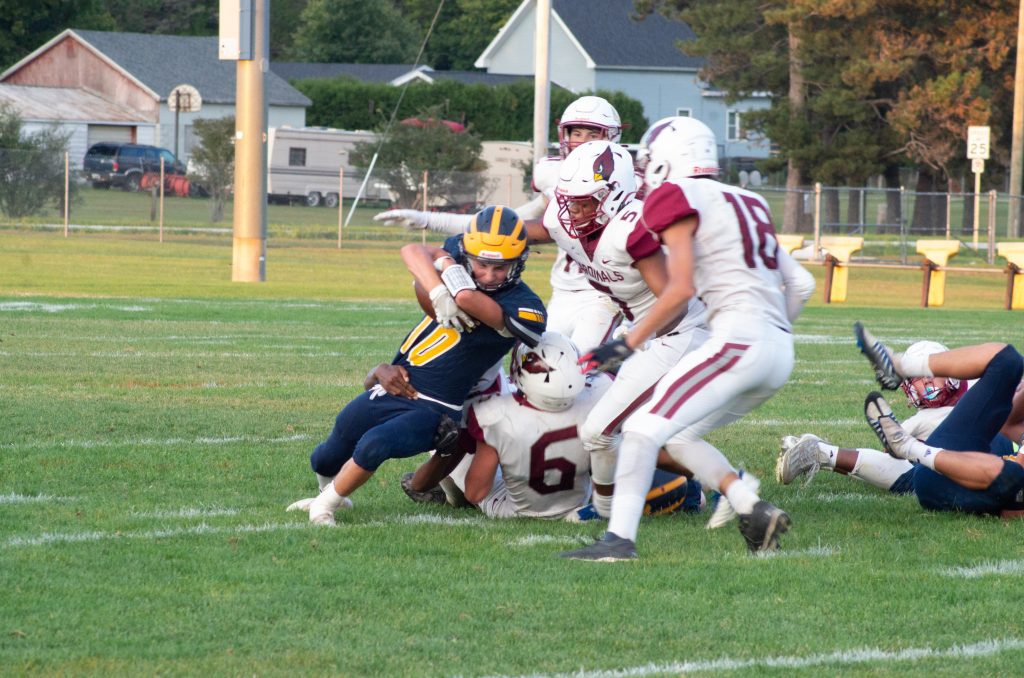 “We’re a good team, (but) we’re young and we’re still trying to figure things out,” Rademacher said. “We came up against a better football team tonight. I’m proud of my guys. We just have to continue to get better. We had our opportunities; we just didn’t take advantage of them.”
The Chippewas had an opportunity to score before the end of the second quarter when they pushed down to the Orchard View 7-yard line on a couple of big passes by Huber, but turned the ball over on downs.
After taking over on downs at their own 38-yard line, the Chippewas proceeded to click off an impressive 62-yard drive in just five plays to the go-ahead score, a 40-yard burst over the right side by junior fullback Isaiah Davis.
Huber’s 2-point conversion run gave Manistee a 16-8 lead with 6:27 remaining in the third quarter. 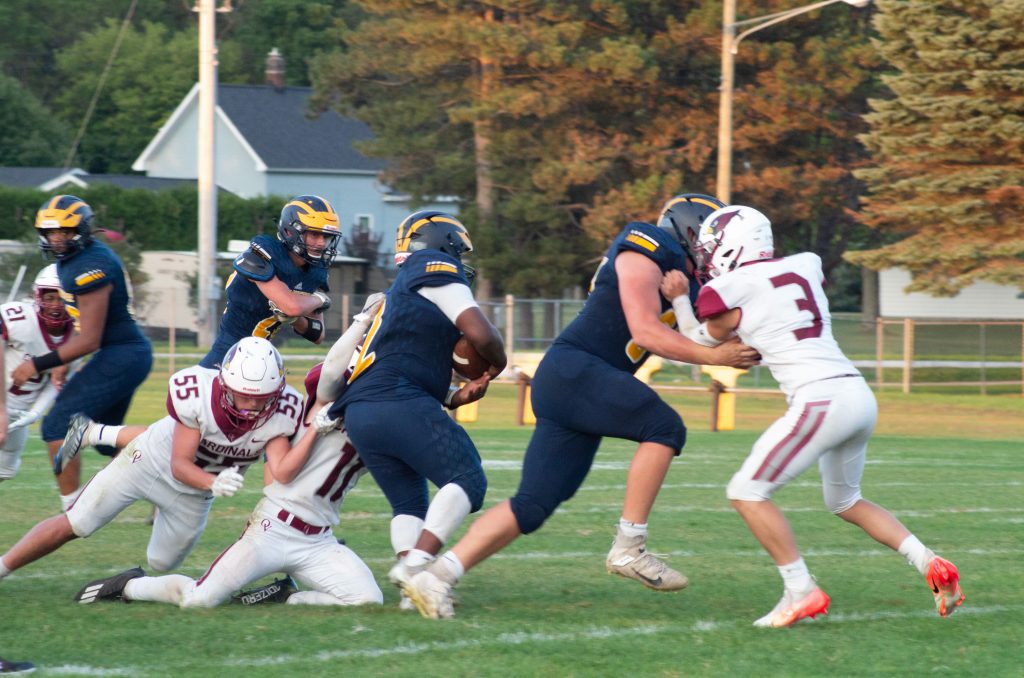 “In the second half, our front guys pushed through and opened up some holes for the running backs, and opened up some passing lanes and we put it on them,” Manistee senior quarterback Jeff Huber said. “We want to rely on our guys up front. They put in the work all summer. We just want to run the ball. That’s our main plan.”
Orchard View, though, answered that Manistee score with one of its own late in the fourth quarter when junior running back Bryce Benard went in from 5 yards out with 7:04 left in regulation.
The Chippewas were hit with a 15-yard unsportsmanlike penalty that moved the ball from the Manistee 22-yard line to the 5, and the Cardinals scored on the next play.
But the Chippewas stopped the Cardinals short of the end zone on the two-point conversion attempt, and maintained the lead, 16-14. 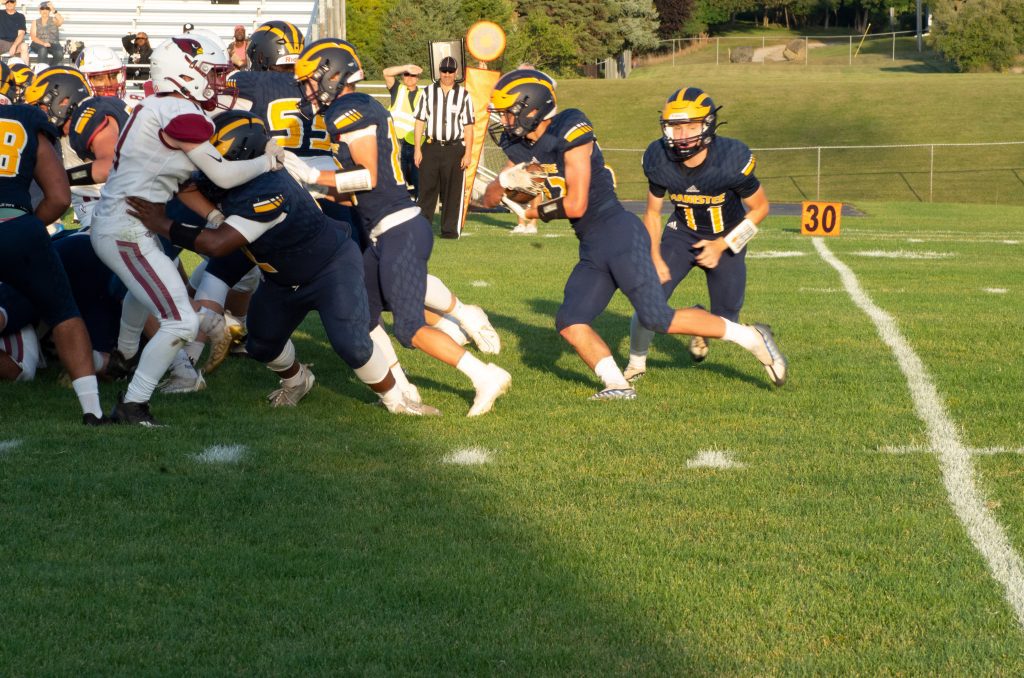 “I think we had to wake up after that (OV TD),” said the QB. “They’re a good team, but we knew we could beat them. We just had to wake up, and then our guys started catching fire up front, and we started pushing people back.
“That led to some scoring. Once we got momentum, that was it.”
Manistee needed just five plays to reach the end zone again to answer the Cardinals score, Huber hitting Hornkohl with a 24-yard pass to move the ball from the OV 40 down to the 16.
Hornkohl punched the ball in from five yards out two plays later, after Davis clicked off a punishing 11-yard run, to give the Chippewas a 10-point lead, 24-14 at the 5:42 mark. Kaden Kott caught the two-point conversion pass.
Manistee’s defense triggered the next Chippewas scoring drive when Braydon Sorenson recovered an OV fumble near midfield, and Huber saw Hornkohl running behind the Cardinals defense down the right sideline for a 44-yard TD strike to end the scoring for the night with 4:11 left in the game.
“I give our kids all the credit in the world,” Bytwork said. “They embraced the moment after going in tied at halftime. You don’t think what could have been, you embrace that particular moment.
“That (second) was the best half of football we’ve played. I think the biggest play was stopping them on the two-point, because that gave us a little bit of juice.
Davis finished the night with 10 carries for 107 yards and a touchdown, followed by Hornkohl with 84 yards and two scores on 18 tries.
Huber, who had 42 yards rushing on five carries, completed 5-of-5 passing for 77 yards and a score. Hornkohl had two catches for 54 yards and a TD.
Defensive leaders included Sorenson with 18 tackles and a fumble recovery, Davis with 14 tackles and a forced fumble while Yosiah Awamolo had 12 tackles.
Alex Theile was the leading rusher for the Cardinals with 47 yards on 17 attempts, while Oakes carried the ball 11 times and gained 35 yards and scored a TD. OV had 104 yards rushing for the game.
Oakes and Collin Riley had seven tackles apiece to lead the Cardinals, with Riley recording two tackles for loss. Cam’Ron Reese, Theile and Zach Peterson each made five stops. Theile also recovered a fumble.
Manistee improved to 3-1 overall and 1-1 in the conference. The Chippewas hit the road for their next game, traveling to Whitehall for another conference game next Friday.

Orchard View (0-4, 0-2) try to snap its winless streak next Friday against Muskegon Catholic.

Can’t make it to the game tonight? Here is the schedule of games on the radio