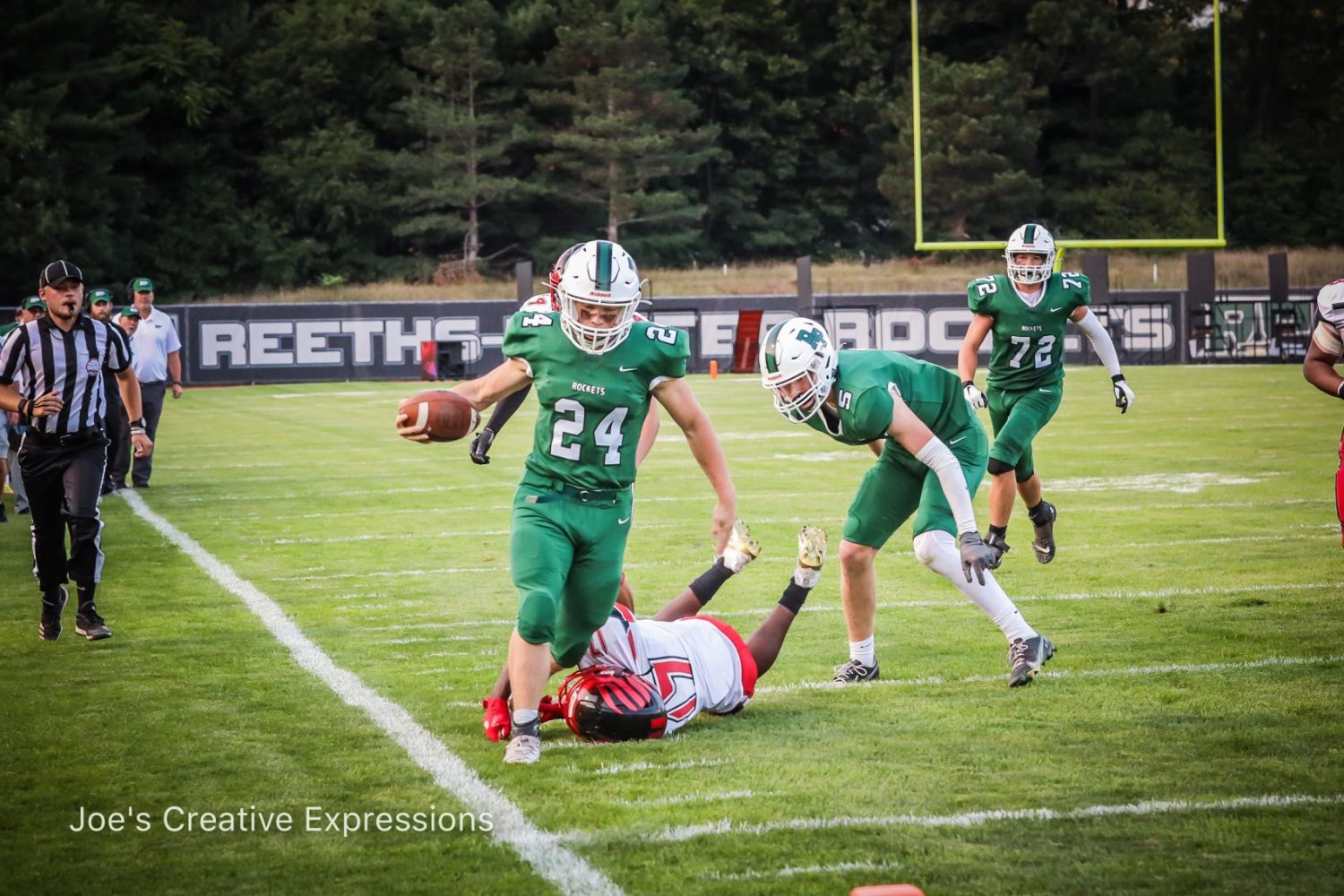 MUSKEGON–Rocket City turned into Party City on Friday night, after host Reeths-Puffer pulled out an emotional thriller that had a little bit of everything – momentum shifts, big hits, gutsy quarterback play, overtime heroics and, yes, controversy.

But after the dust settled, and Grand Rapids Union do-everything quarterback Tommy Stevens’ final pass went incomplete in the end zone, Reeths-Puffer escaped with a 35-29 victory over Union in an instant classic.

“We are just a bunch of guys who really want this, not just for ourselves, but for our school, for Reeths-Puffer,” said junior running back Brody Johnson, as the celebration moved from the field and the bleachers to outside the Rockets’ locker room.

“The student section was packed and everyone was just energized. It’s crazy how much fun it is this year.”

Union suffered its first loss of the year, dropping to 3-1 with tough games the next two weeks at Mona Shores and home against Muskegon.

Puffer, meanwhile, improved to 3-1 under the direction of first-year coach Cody Kater, and will be favored in its next two games at Wyoming and at home against Zeeland East.

“It’s exciting to see our kids be happy and full of pride,” said Kater, whose team suffered several key injuries up front in last week’s emotional loss at Muskegon. “Every high school kid wants that and works for that. We are trying to establish that Reeths-Puffer brand.”

The game pin-balled back and forth throughout, with Union holding a 14-13 halftime lead and the game tied, 21-21, after three quarters.

Things really got interesting – and contentious – in the fourth quarter and then overtime.

Puffer took control midway through the fourth quarter, when a 20-yard scoring run by Johnson, and the ensuing two-point conversion run by senior quarterback Brady Ross, gave the hosts a 29-21 lead.

Union, a team which had been synonymous with losing for much of the past decade, showed those days are long gone with a gutty drive to tie the game.

The first controversial play of the night came on the Red Hawks’ touchdown to cap that drive with 10 seconds remaining.

Stevens, who burned the hosts all game long with both his arm and his legs, darted toward the end zone off right tackle, but took a hit and the ball got knocked loose – and was recovered by the Rockets. However, the official ruled that Stevens had broken the plane of the end zone before he fumbled, making the score 29-27.

On the ensuing two-point conversion, Stevens rolled right on a run-pass option and outraced the Puffer defense to the pylon to tie the game and set off a celebration on the Union sideline.

That set the stage for overtime, which in high school, still gives each school one chance at the 10-yard line.

Union, which went 1-71 in an eight-year stretch from 2012 to 2020, won the coin toss and elected to go on defense first. After stuffing Johnson on the first play, Puffer went to the air and Ross threw a strike to big target Tayte VanderLeest (6-4, 200) in the middle of the end zone. Kater elected to kick the extra point, but a poor snap resulted in kicker Brooks Johnson getting stopped short when he tried to run it in.

That failed conversion left the score 35-29 in favor of Puffer, meaning the visiting Red Hawks needed a touchdown and an extra point for the win.

Union ran the ball three times and got down to the 1-yard line, then scored on a 4th-and1 plunge by Stevens – which turned out to be the second controversial play (both runs by Stevens) of the night.

A flag was thrown for illegal motion, which Union coach Don Fellows argued vehemently on the field for several minutes, but ultimately the call stood and the Red Hawks now faced 4th-and-6 to tie the game.

On that play, Stevens dropped back to pass, then was flushed out of the pocket, before reversing his field and racing toward the end zone. However, Puffer cornerback Clyde Bartee was fast enough and took the correct angle to force Stevens to turn and throw the ball – which he did, just over senior receiver Brian Parks’ hands in the middle of the end zone, ending the game and setting off the aforementioned Puffer celebration.

Puffer quarterback Brady Ross might not have produced as many highlight-reel runs or passes as Stevens, but the gritty senior delivered in every clutch situation. Ross finished 10-of-14 for 87 yards, with two touchdowns and a pair of 2-point conversion runs.

“It’s exciting but these are the kinds of games we haven’t won in the past,” said Ross, who throws regularly to five different receivers, including his junior brother, Bryce Ross.

VanderLeest, who had the game-winning reception in overtime, led the Rockets with three receptions for 38 yards and added several big runs on end-around plays.

Union countered with Stevens, who did most of his damage in the first half with his arm, connecting with junior Jersey Brown on a pair of TD passes, from 27 yards and 25 yards.

In the second half, Stevens started running wild on the tired Puffer defense, scoring on a 4-yard run and his controversial 2-yard run in the final seconds of regulation.

Puffer’s defense was led by the inside linebacker duo of Tyveia Williams and junior Caiden Bolduc, along with the pass rushing of outside linebacker Brooks Johnson and defensive end Caleb Zimmerman.

Reeths-Puffer will travel to Wyoming next Friday. 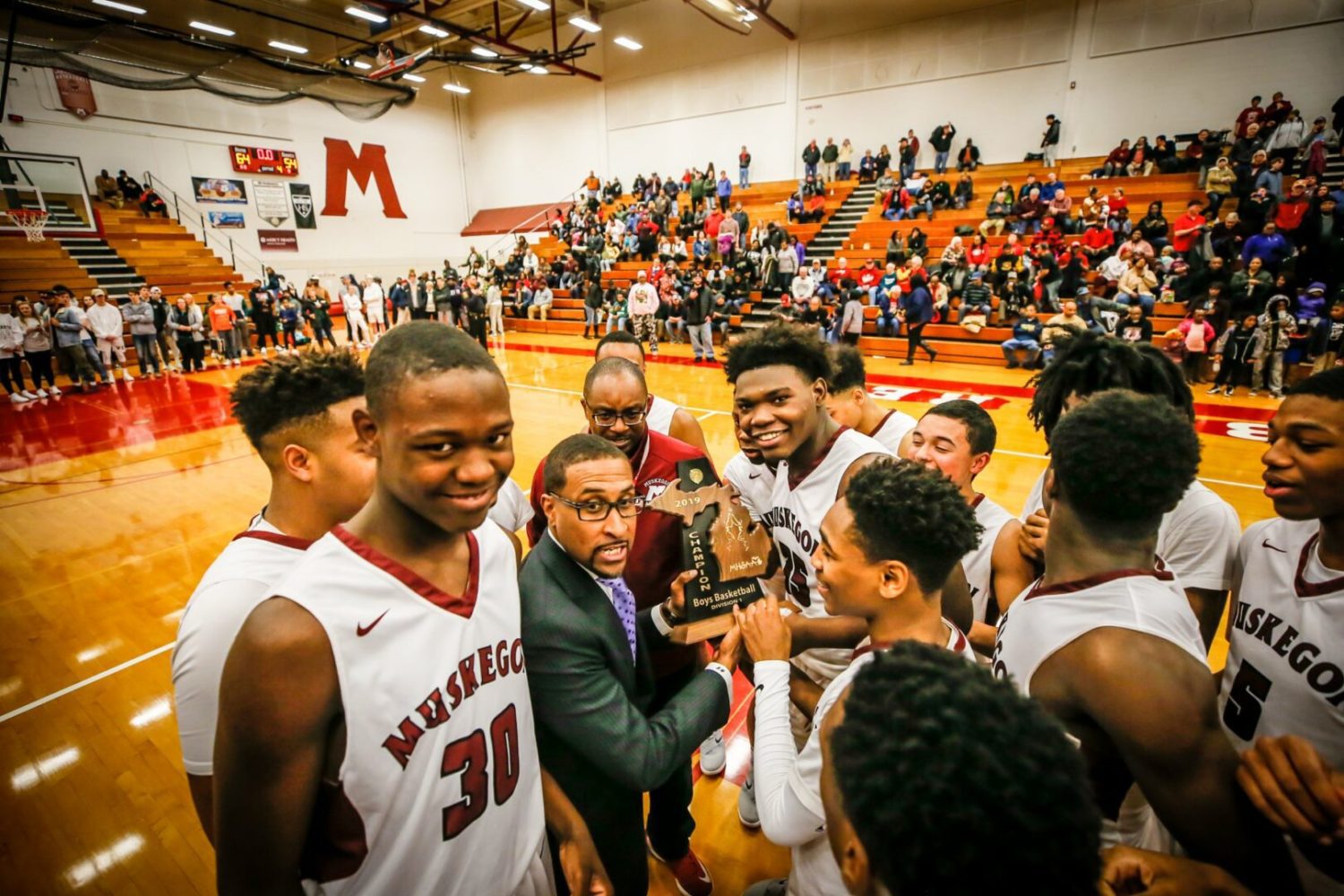