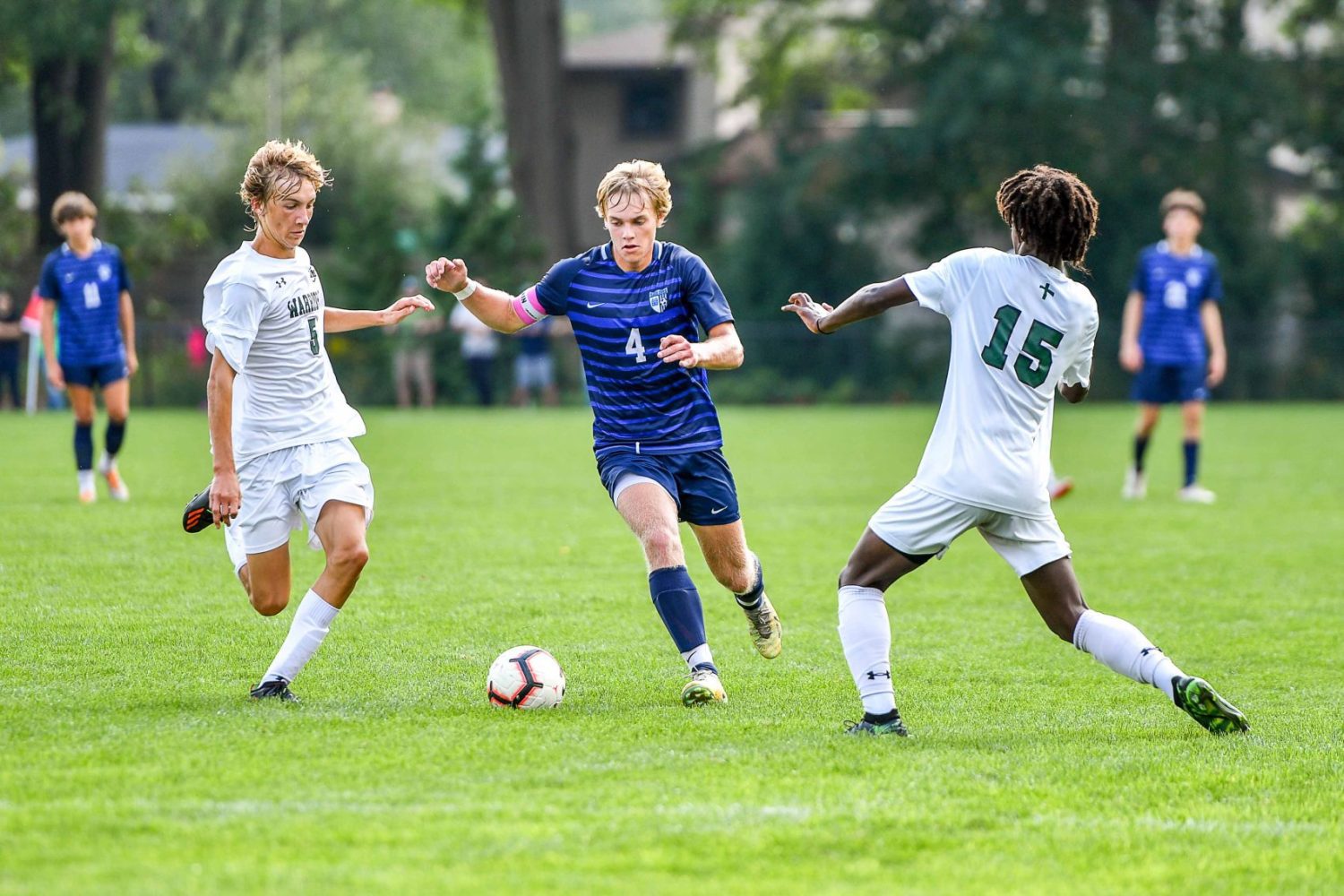 The host Sailors shot past WMC late in the game off the solid play of new French exchange student, Louis Rimbault.

The sophomore midfielder tallied a pair of goals barely a minute apart to lift Mona Shores.

Rimbault gave Mona Shores a 2-1 lead with 17 minutes left in the game after he snuck his first goal past Warrior goalkeeper Jared Olsen. Rimbault found the goal on a bang-up play off a free kick taken by Ryan Burnaw from 30 yards out.

Mona Shores took the 3-1 lead off a perfectly timed head ball by Rimbualt on a corner kick from Daniel VanderPloeg.

“I always wanted to do a header like that (off a corner kick) and it was great to connect on it from Daniel (VanderPloeg),” said Rimbault who is also living with VanderPloeg as his host family. “My host family can go home and have a good night now.”

Rimbault arrived at Mona Shores from France just over two weeks ago and was lacking a physical but not skill.

“He came to us four games ago and was a surprise,” said first-year Mona Shores Coach Bill Moulatsiotis. “He didn’t have a physical yet when he got here, but he sure was a great addition for our defense and as a technical player.”

Mona Shores battled against a stingy WMC defense that stopped the Sailors on multiple opportunities throughout the first half.

Kaden Pulaski gave the Sailors a 1-0 lead with three minutes left in the first half when he took a through pass from teammate Lane Fisher, beat the next WMC defender, and snuck a shot past Olsen inside the far post.

Olsen played tough for WMC in goal, making 15 saves in the loss.

“I was just stepping up on the back end and tried to play fast and physical up on top,” said Olsen who also helped WMC offensively in the second half with his powerful kicks. “Timing my punts is tough but it’s something I’ve been working on and have had success on with an assist against Manistee earlier this season.”

WMC battled back against the Sailors in the second half with an early goal from Gavin Riksen to tie the score 1-1. The senior found the tally on a high cross pass from Jayden Start and battled the ball away from Mona Shores goalie Dylan Brady.

Brady finished with nine saves for the Sailors in the win.

“WMC gave us all we could handle today,” said Mona Shores Coach Moulatsiotis. “Our defense played tough and solid against a well coached team.”

The inaugural “Hero’s Cup” is a special game that honors first responders from the Norton Shores police and fire departments.

“This game was something me and (WMC) Coach Buursma wanted to come up with to honor our first responders who take care of us when we need them and cement our school’s relationships together here in Norton Shores,” said Moulatsiotis.

“WMC is a great program that brought us soccer to Muskegon back in 1968. Even when my dad (Tony Moulatsiotis) coached here, he talked about how good WMC’s program is with multiple state titles and how we couldn’t think about their school’s size compared to ours.”

Mona Shores (8-1-2) will next travel to face rival Reeths-Puffer for an O-K Green matchup on Tuesday. 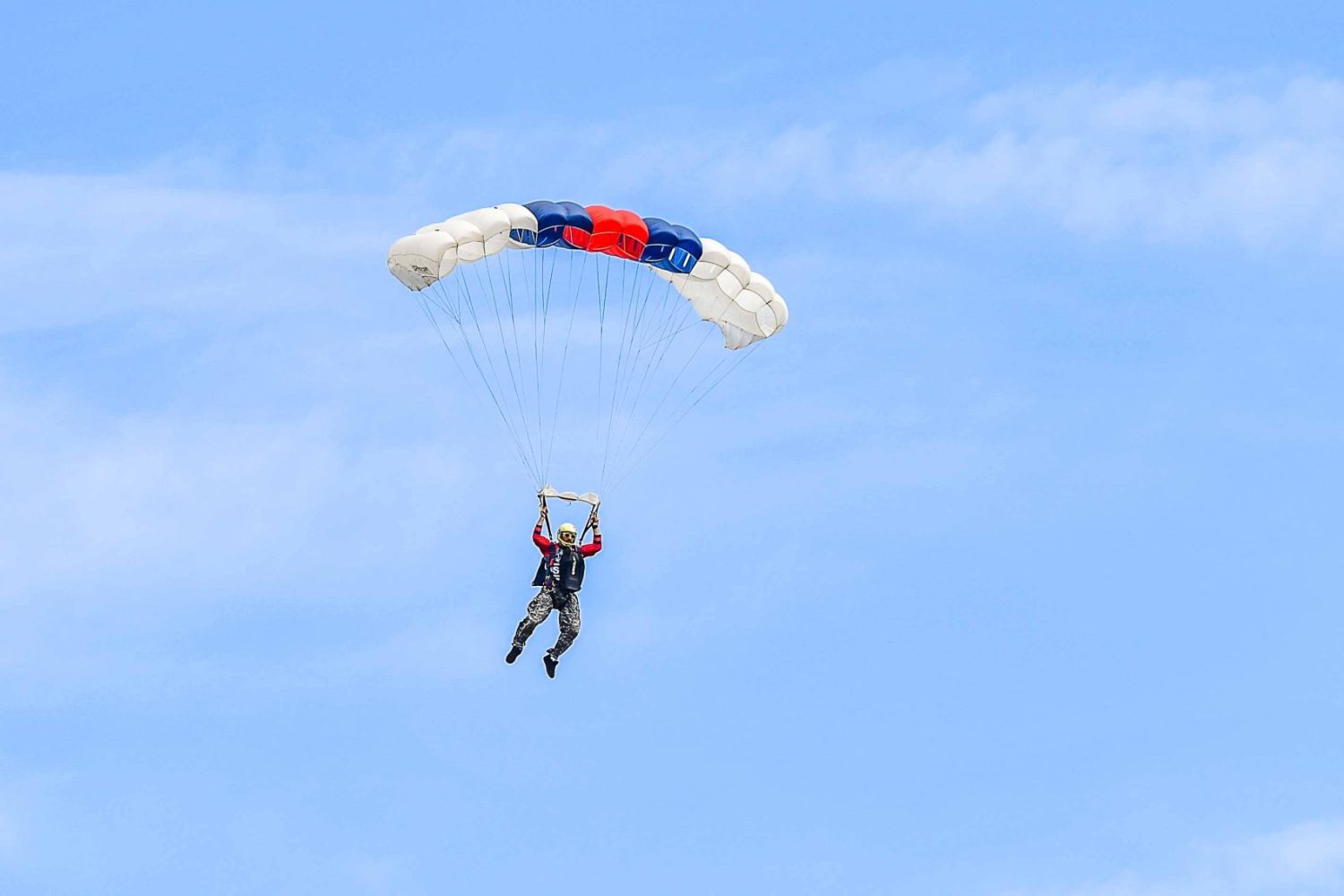 Tim Vanslooter from Skydive Grand Haven drops in on the pitch to deliver The Hero’s Cup trophy. Photo/Eric Sturr 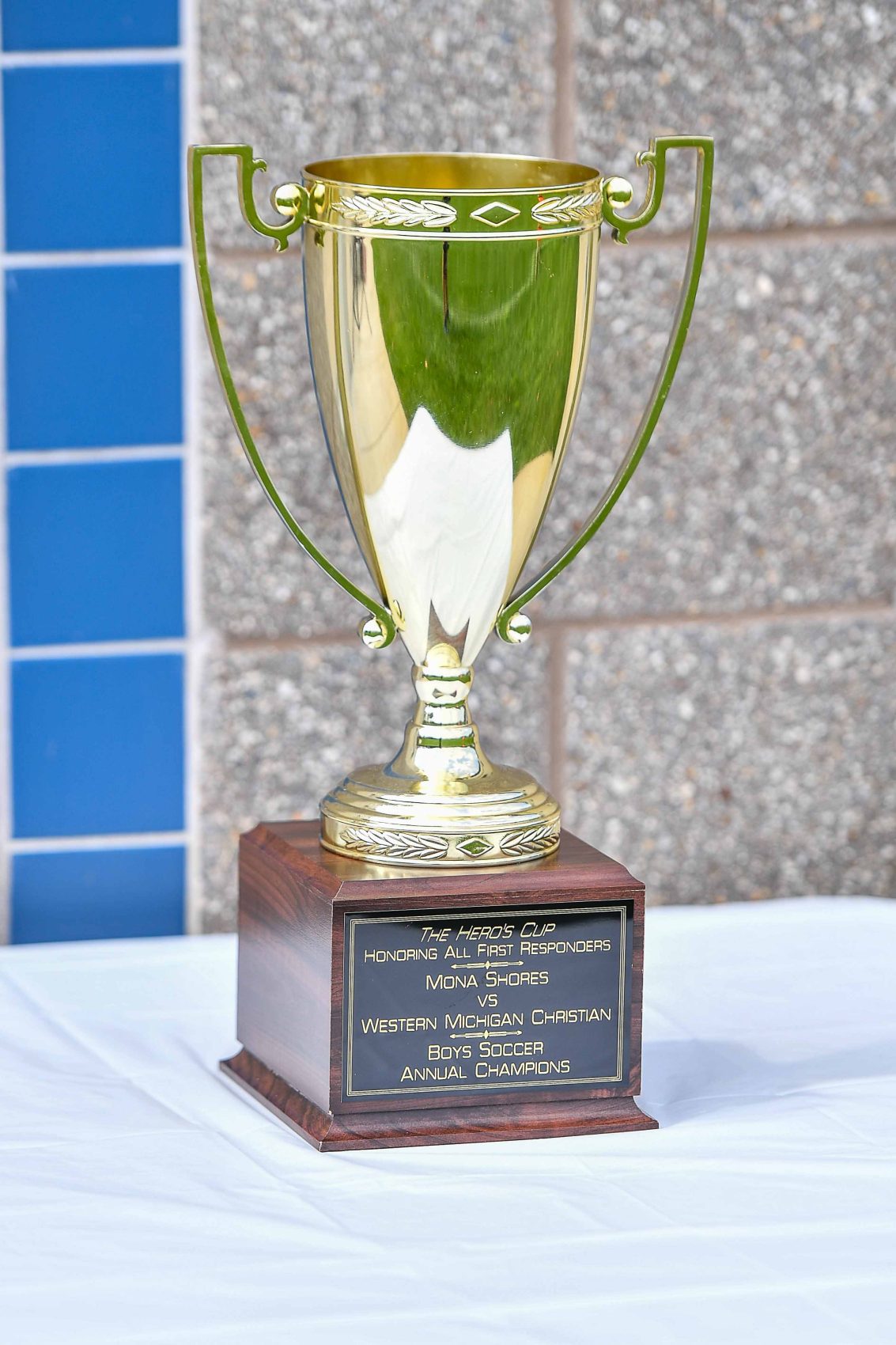 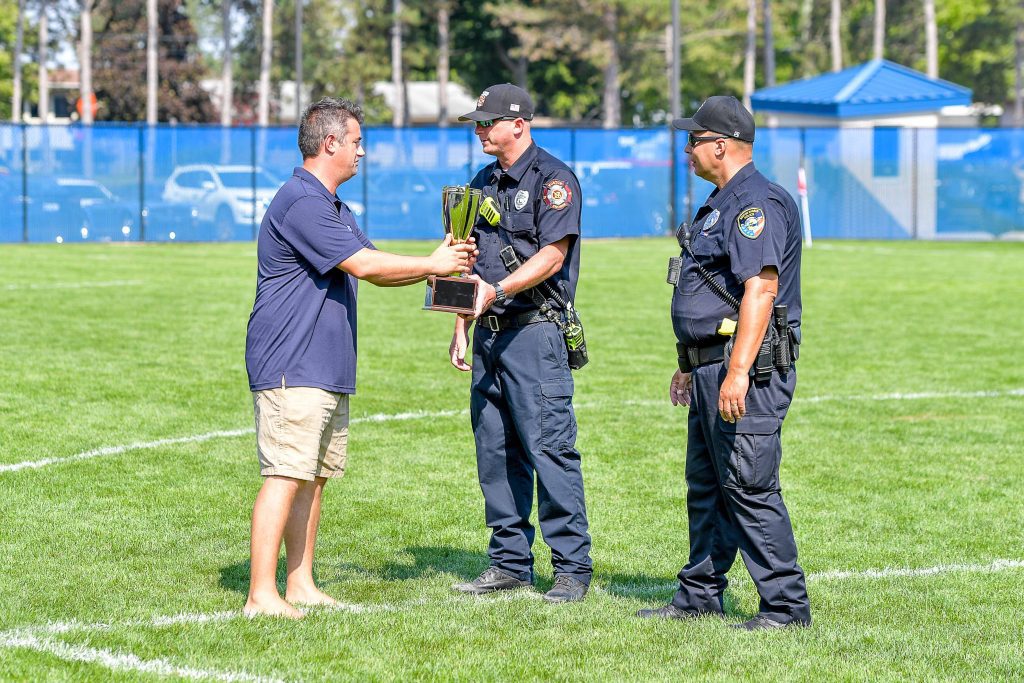 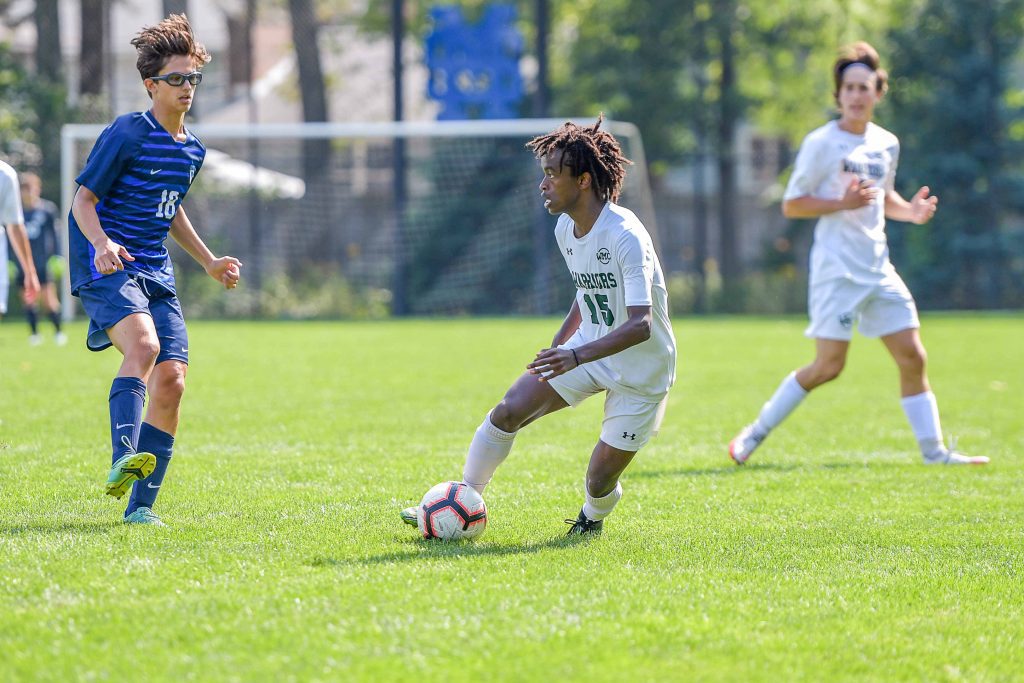 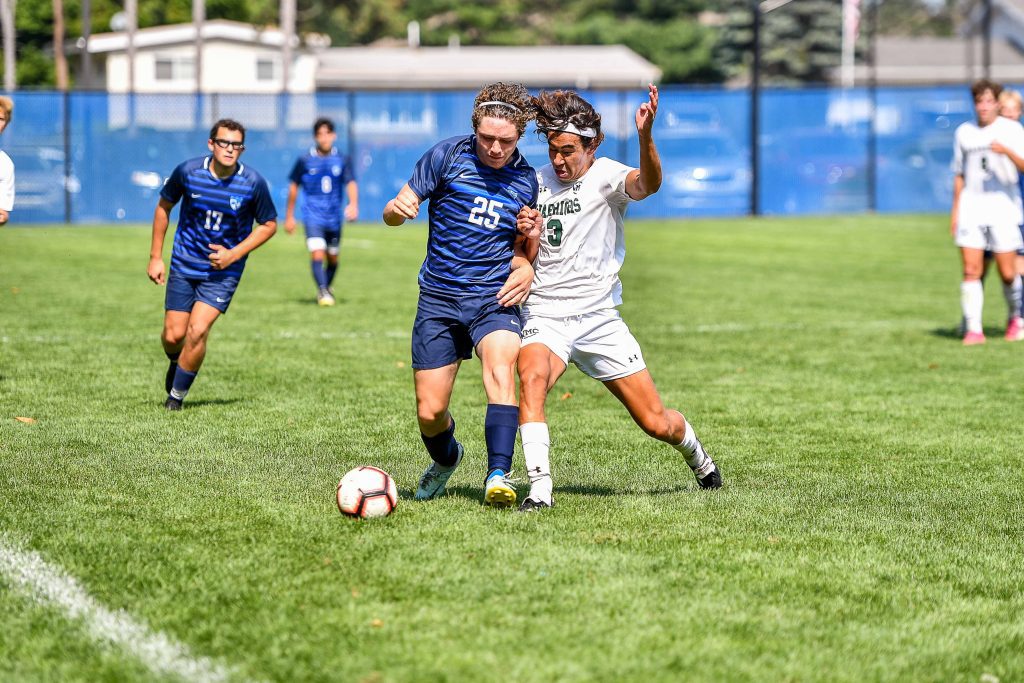 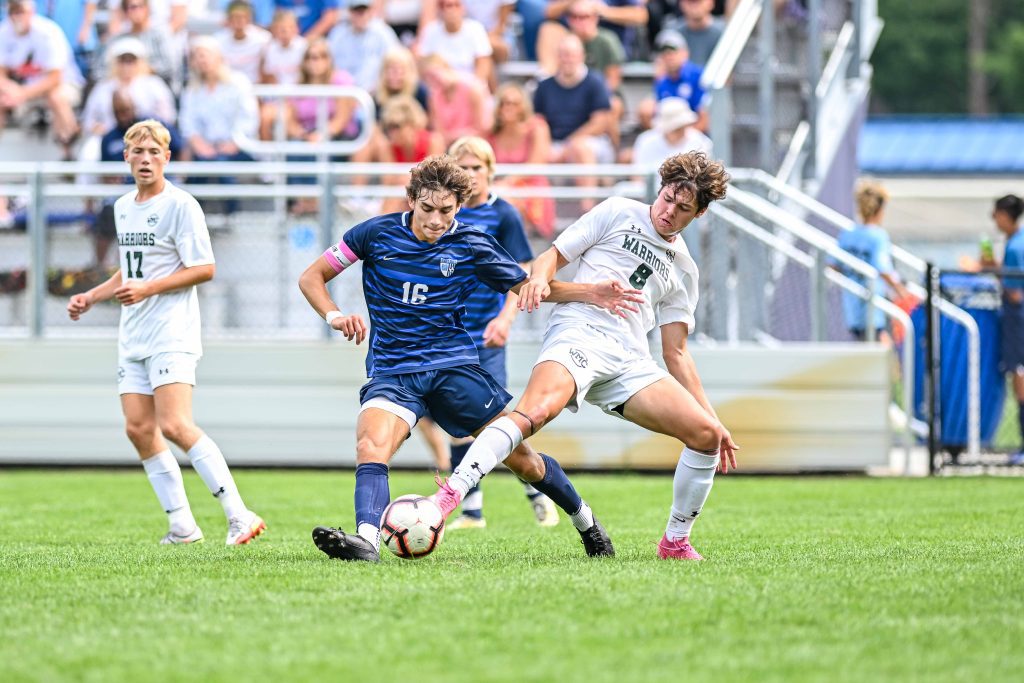 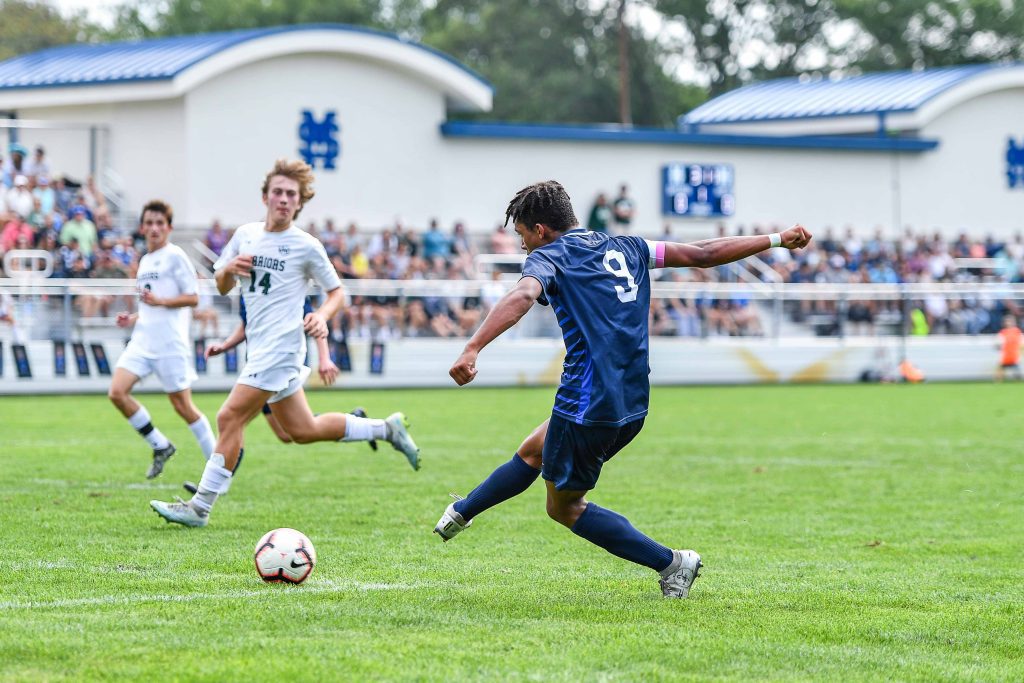 Kaden Pulaski puts the shot by Warrior goalie for the first goal of the game. Photo/Eric Sturr 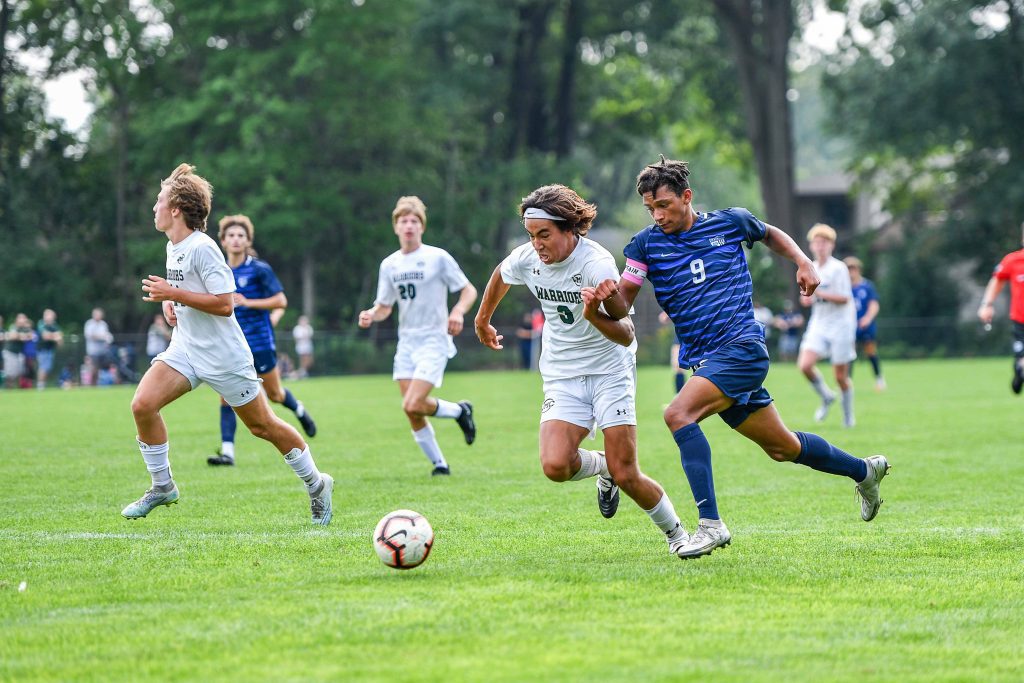 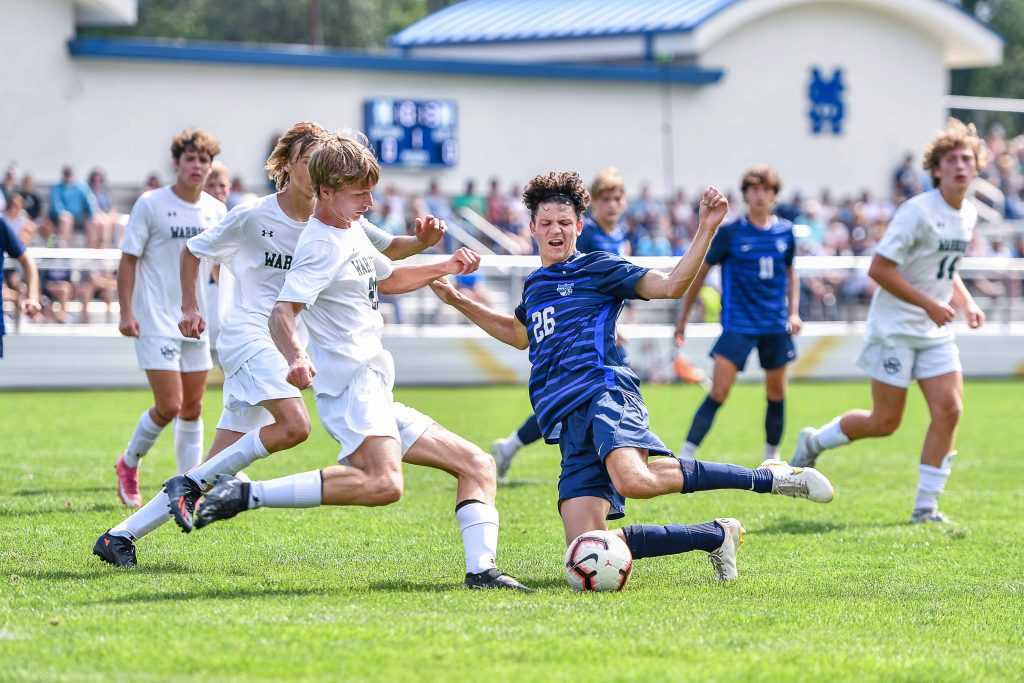 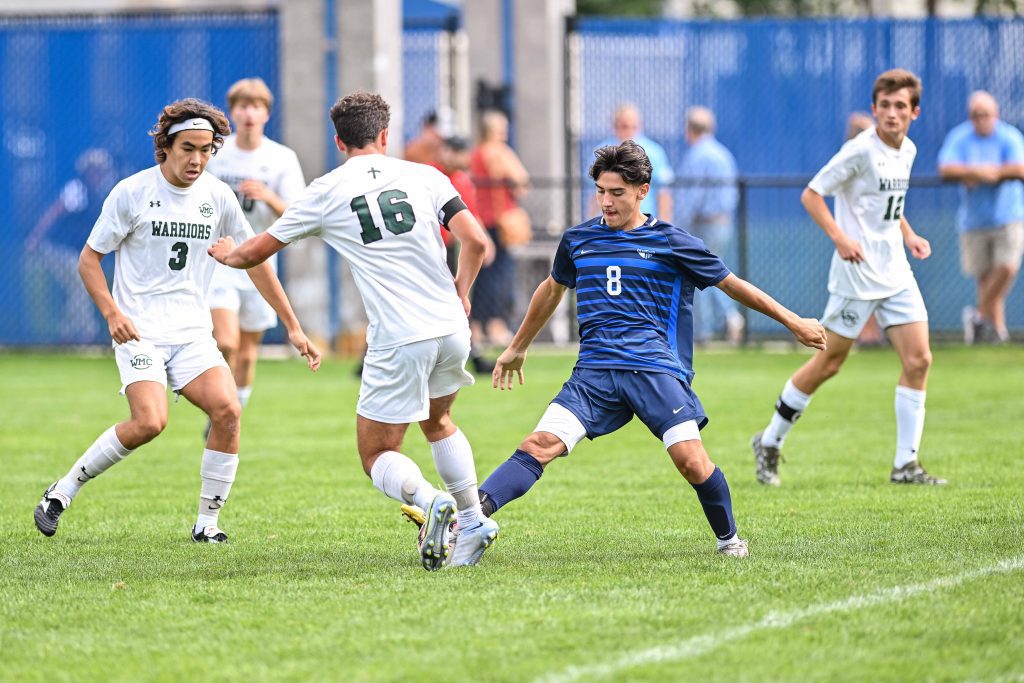 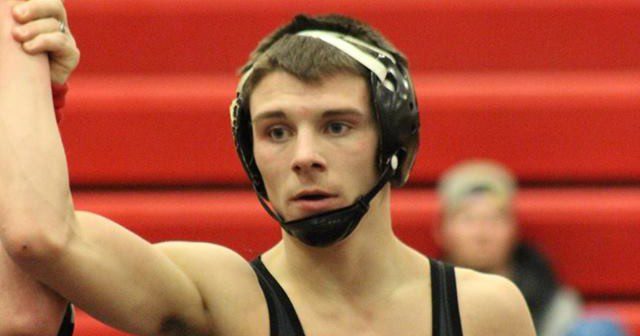