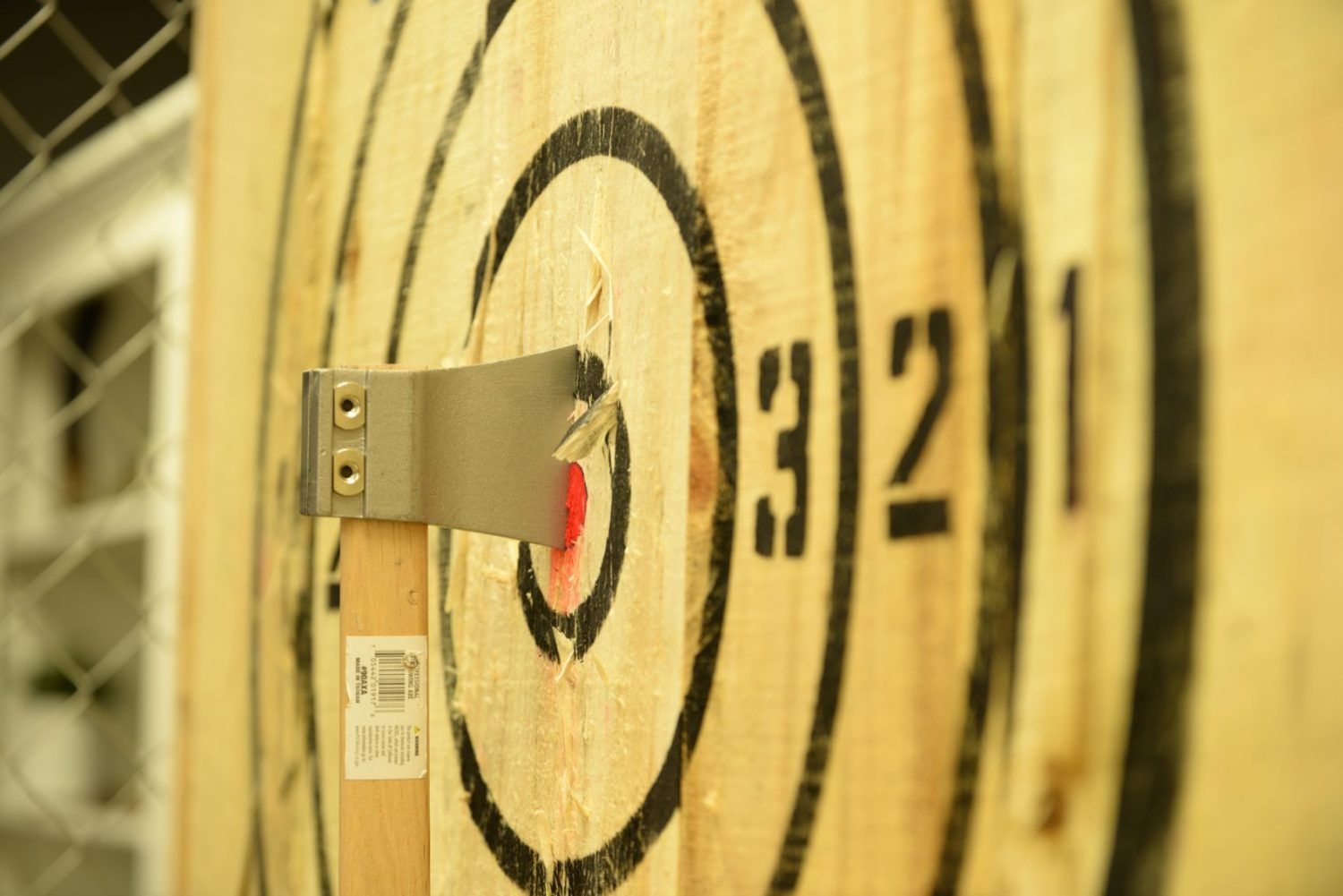 Along with his partner, Ash Masse, they’ve brought a sport to the area that anyone can enjoy: Axe throwing. It’s the first of its kind in this area, and its future is bright.

On Tuesday, Wednesday and Thursdays at the Valkyrie in North Muskegon, there are people throwing axes. There’s a mix of skill levels from beginner to expert along with a wide variety of ages.

A youth club is in the works and will be implemented sometime in the near future, making it even more of a family sport than it already is.

The targets and axes are provided and the players need only bring a smile and good sportsmanship. There is no other gear necessary, making it accessible for any budget.

“It’s for everyone,” Lewis said.

And how could he not be proud?

He started a business in the midst of the Covid pandemic with no guarantee of interest or success. In the end, the risk paid off. Lewis and Masse are now looking at expanding the lanes and space due to high demand.

The growth has been staggering. Just a couple years ago when the league started, there were fifteen players. Today, there are more than 50. The Muskegon league has gotten so popular that they were able to add another night to the schedule, bringing the total to three nights per week.

The sport is played exactly as you’d expect it to be: You throw an axe at a large target and hope to get as close to the middle bullseye as you can. There are two targets per lane, and one person per target.

Each person gets 10 throws, switching sides at the midway point. At the end, the person with the highest score wins.

“It’s about having fun, throwing an axe at the board and trying to get it to stick,” said Lewis. 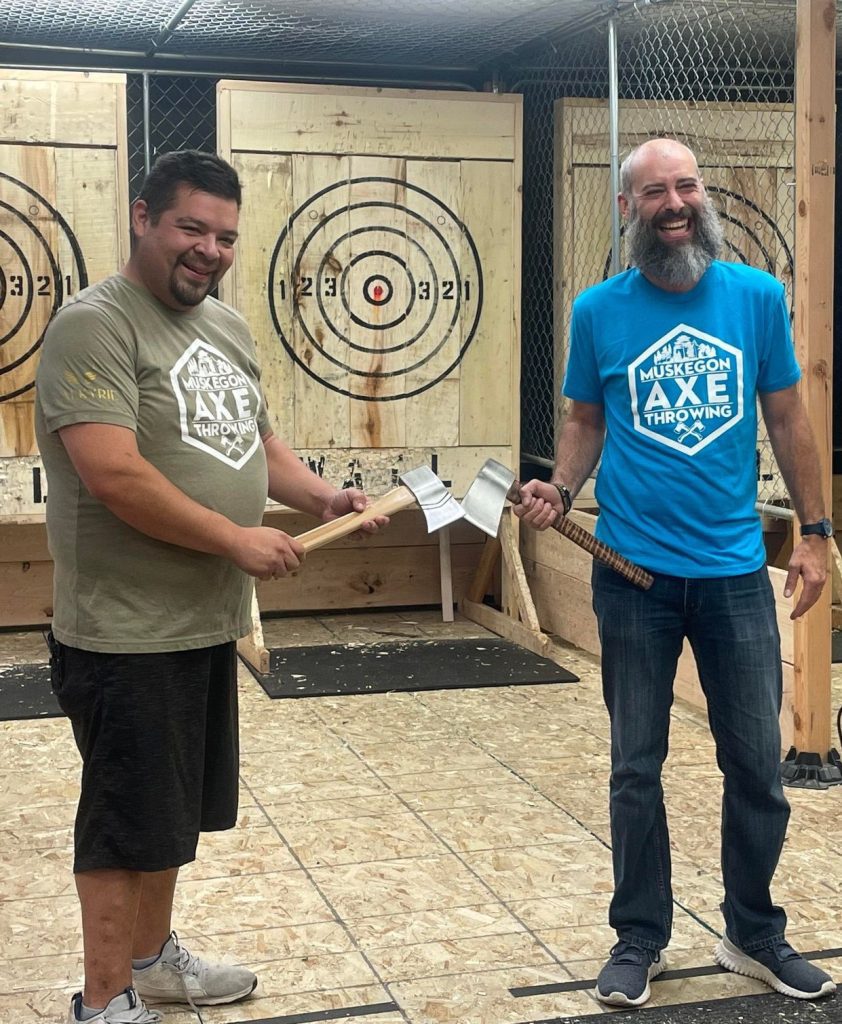 Safety is a huge factor. The sport itself isn’t complicated to learn, but safety always comes first. The rules of safety are basic: Don’t walk in front of a flying axe. Don’t throw an axe until the lane is clear. Throw only in the lane.

But why start axe throwing? For Lewis, it’s in his blood. He has fond memories of his grandfather and cousins throwing axes with him, and it was a love that has continued to grow.

He was surprised when one night, sitting at home, he turned on ESPN and realized axe throwing had become a recognized sport. It took 1½ years of research and backyard axe throwing before the idea came to fruition, starting small and growing in leaps and bounds.

Muskegon axe throwing started as a mobile service. A large part of their business started with providing entertainment for various get-togethers. Since axe throwing requires six feet of distance, it was the perfect sport for Covid.

The league found success quickly, being booked every weekend presently as well as making appearances at festivals and other events. The Muskegon Axe Throwing League donates a portion of every sale from these occasions to various fundraisers.

“Starting a small business is not an easy thing, but now we’re starting to go full swing and the word is starting to get out,” Lewis said.

Mike and Ash both love the sport and their enthusiasm is addictive. Every week is filled with good natured ribbing, adrenaline, but most importantly, laughter and a sense of family. It’s impossible not to feel welcome amid the raucous cheers of support or friendly advice.

The Facebook page has more than 1,000 followers and a perfect 5-star review.

It’s not difficult to see why. The axe throwing league is the perfect place to make new friends, as well as enjoy good food at the Valkyrie where the league is hosted.

There is a league for all four seasons with a three-week break between each.

Walk-in axe throwing is offered at the Valkyrie on nights when league is not taking place. There is no experience necessary, and Mike can be reached via his website, muskegonaxethrowing.com or on their Facebook page.

He encourages anyone with questions to reach out and anyone on the fence to make the leap and give it a try. 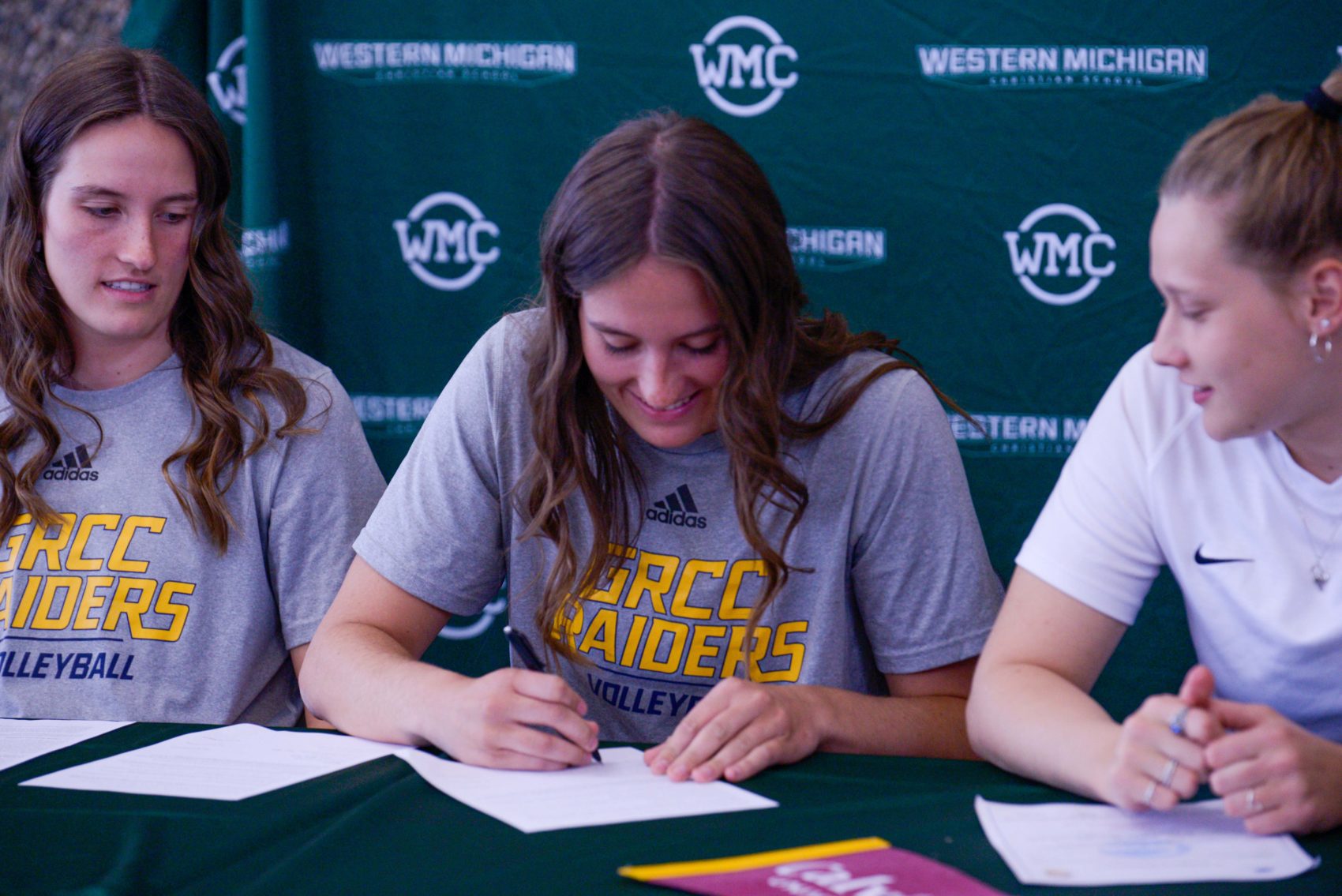