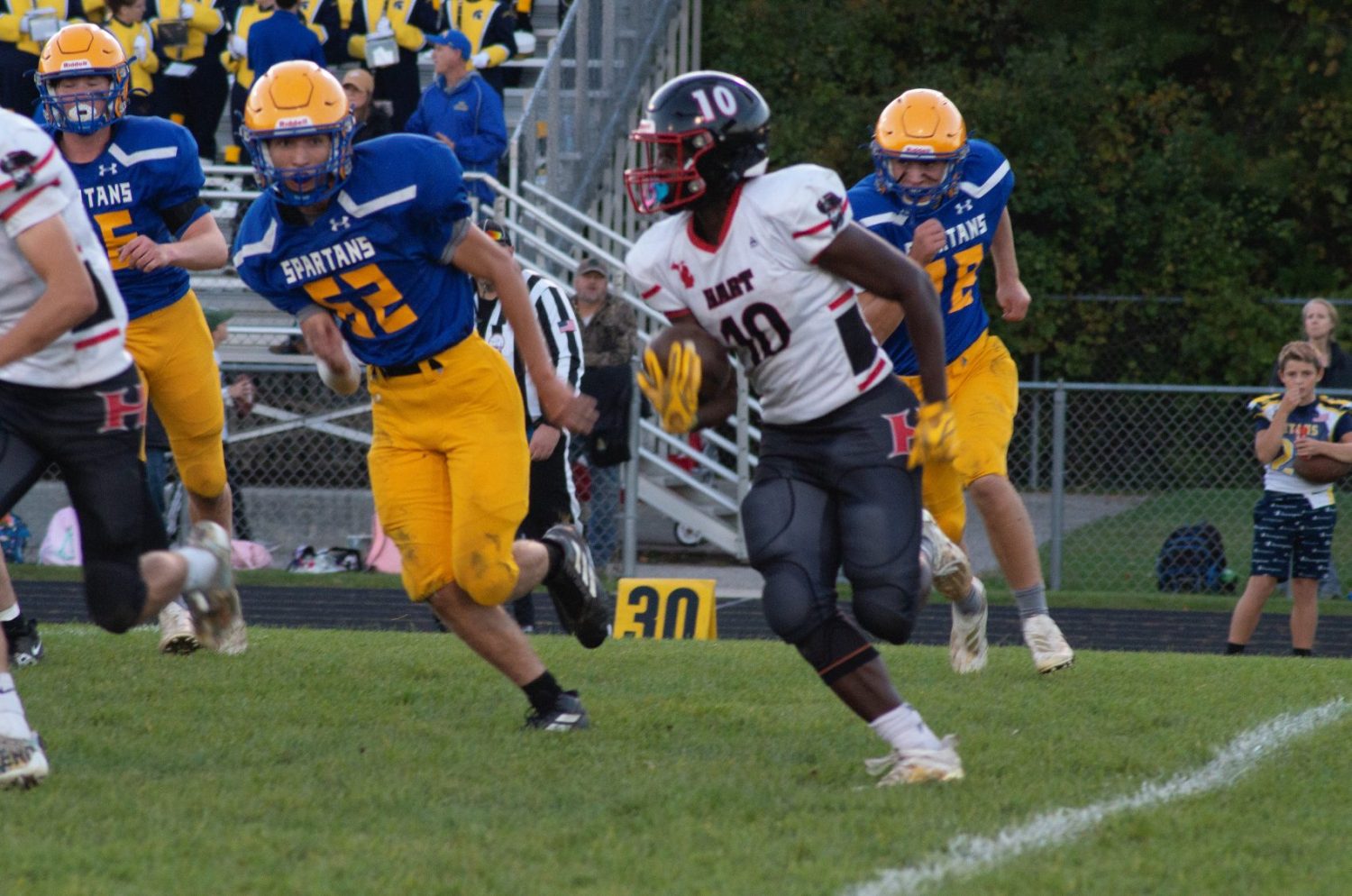 SCOTTVILLE — When it had to, Hart ran the ball right down Mason County Central’s throat Friday night and sealed a 22-16 victory on the road in the West Michigan Conference-Rivers.

Hart successfully bounced back from last week’s 55-14 loss at North Muskegon, and improved its record to 4-2 on the season, the Pirates’ best start in 30 years.

“You’ve got to give them a lot of credit,” Hart coach Joe Tanis said of the Spartans. “They kept fighting until the very end. They’re a good football team.

“I just couldn’t be any more proud of our guys. We had a lot of challenges tonight, a lot of adversity, and our guys just kept rising to occasion every single time.

“There was no finger pointing, and they embraced it. That’s exactly what we want, and all we can ask for. We can’t control the outcome, but we can control our effort and our attitude, and our guys do that.”

After building a 22-8 lead at the end of the third quarter, the Pirates saw the Spartans rally for a score with 2:28 left in the fourth, and with momentum definitely swinging in their direction.

Needing to pick up a couple first downs, and run out the clock, the Pirates clicked off a pair of huge gains by Eman Hertzler and Trayce Tate to move the ball from the Hart 40-yard line to Central’s 13.

“We knew it was going to be a dogfight,” Hart quarterback Trenton Swihart said. “We knew they were going to come out and hit us hard.

“But, we just put our best foot forward, kept pushing and moving the ball down the field. We responded, drove the ball back down the field and kept trucking.”

The Spartans only had the ball for one minute in the second quarter, and that fact wasn’t lost on Tanis.

“Part of that is because we scored quick,” the coach said. “We feel like we can score quick through the air. But, coming out of halftime we knew we needed to get our defense off the field a little bit.

“So, we abandoned trying to score quick, and we really wanted to establish dominance. We came right out and drove the ball down the field, running the same stuff over and over.

“That kind of set our mentality going forward for the rest of the game, I felt like. When we needed it, our kids rose to the occasion.”

Swihart fueled the Pirates’ first scoring drive, hitting Chase Gale with a big pass down to the Spartans’ 19-yard line. Tate went in from 17 yards out with just 2.8 seconds left in the first quarter. Hertzler hauled in the two-point conversion pass from Swihart and Hart led, 8-0.

The combination of Swihart-to-Gale clicked again in the second quarter, only this time for an 84-yard touchdown play. Gale had gotten behind the Spartans’ secondary, caught the ball at about the Hart 40 and took it the rest of the way to the end zone to make it 14-0 for Hart at the 7:41 mark.

But the Spartans got on the board before halftime, senior quarterbck Will Chye throwing a 14-yard scoring strike to senior end Kaiden Cole who made a diving catch in the right corner of the end zone on fourth down.

Chye ran in the two-point conversion to cut the deficit to 14-8 with only 58.4 seconds remaining in the first half.

“The kids kept fighting,” Spartans head coach Scott Briggs said. “They kept clawing their way back into it. Usually when you win the turnover battle, you win the game. But that didn’t happen tonight.

“Right now we’re overcoming some injuries and what not. Give Hart credit. I thought they played hard, and made some big plays. But, again it came down to us making mistakes.

After the Spartans went three-and-out on their first possession of the third quarter, the Pirates immediately struck for another score, going on an 84-yard march.

Connor Edwards, who rushed the ball four times on the drive, scored on a three-yard run off tackle for the touchdown and Tate added the two-point conversion as the Pirates mounted a 22-8 lead with 6:11 left in the third.

But the Spartans answered with a 60-yard drive, capped with an 11-yard touchdown pass from Chye to Cole and then Chye’s two-point conversion run to again make it a one-score game, 22-16 with 2:58 remaining in the game.

“We had some big plays,” Briggs said. “I thought Will did a good job at quarterback, made some really nice passes. Kaiden Cole made some nice catches for us.

“The line was able to hold those guys out. It’s just that we’re not consistent enough. We’re just not at the point where we’re consistent enough in all aspects of the game, offense and defense.”

Hertzler finished the game with 118 yards rushing on nine carries for the Pirates. Tate picked up 57 yards on 11 attempts with a touchdown and one two-point conversion. The Pirates had 253 yards rushing on the night, and 404 yards of total offense.

Swihart was an efficient 4-of-7 passing for 151 yards, a touchdown and a two-point conversion. Gale had three catches for 148 yards and a touchdown.

“Coach (Jacob) Thumele, our defensive coordinator, did a phenomenal job,” added Tanis. “They want to run the ball, and we took away the run tonight.

“We forced them into the pass game early tonight, I thought, and that’s a credit to our kids up front, our D-line and our linebackers. Our defensive backs held up tonight. We weren’t expecting to see somebody throw the ball that many times on us tonight.

“So for them to hold up and do that, it was really impressive. It was just a lot of fun.”

The Pirates are 2-1 in the WMC-Rivers, trailing North Muskegon and Ravenna (both 3-0) by just a half-game. Hart hosts winless Holton next Friday.

It was the second straight loss for the Spartans, dropping them to 1-5 overall and 1-3 in the conference with homecoming against Hesperia next Friday. 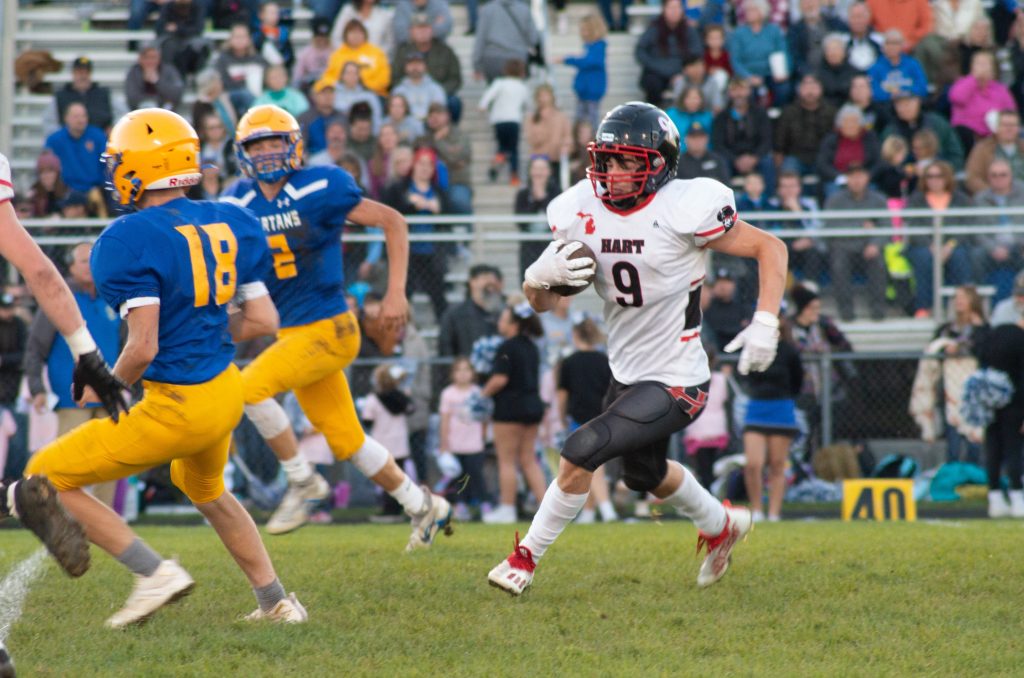 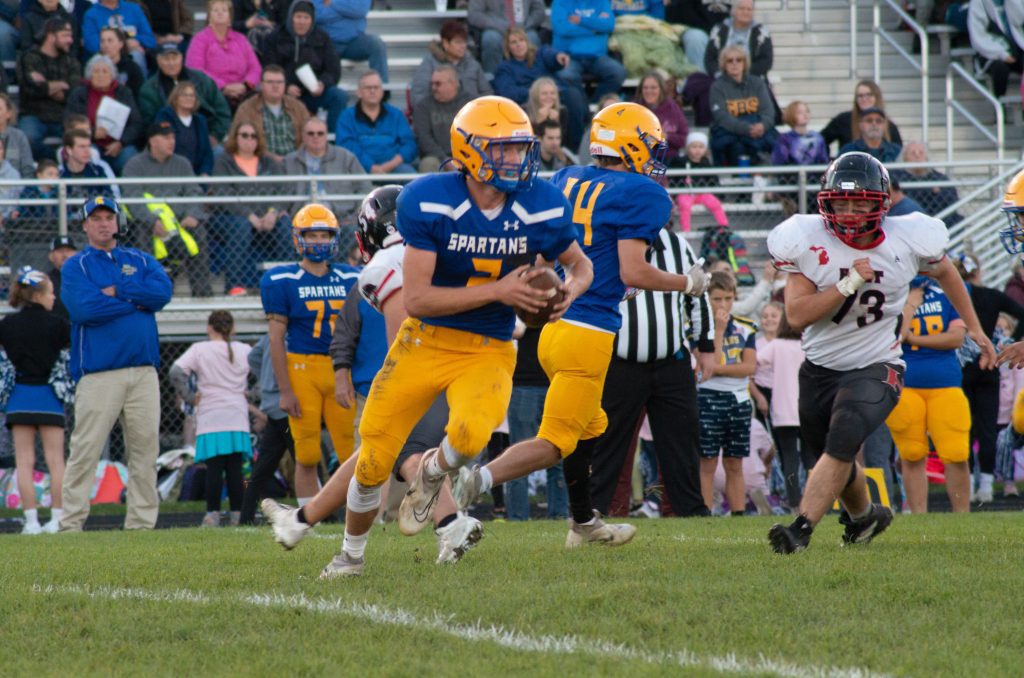 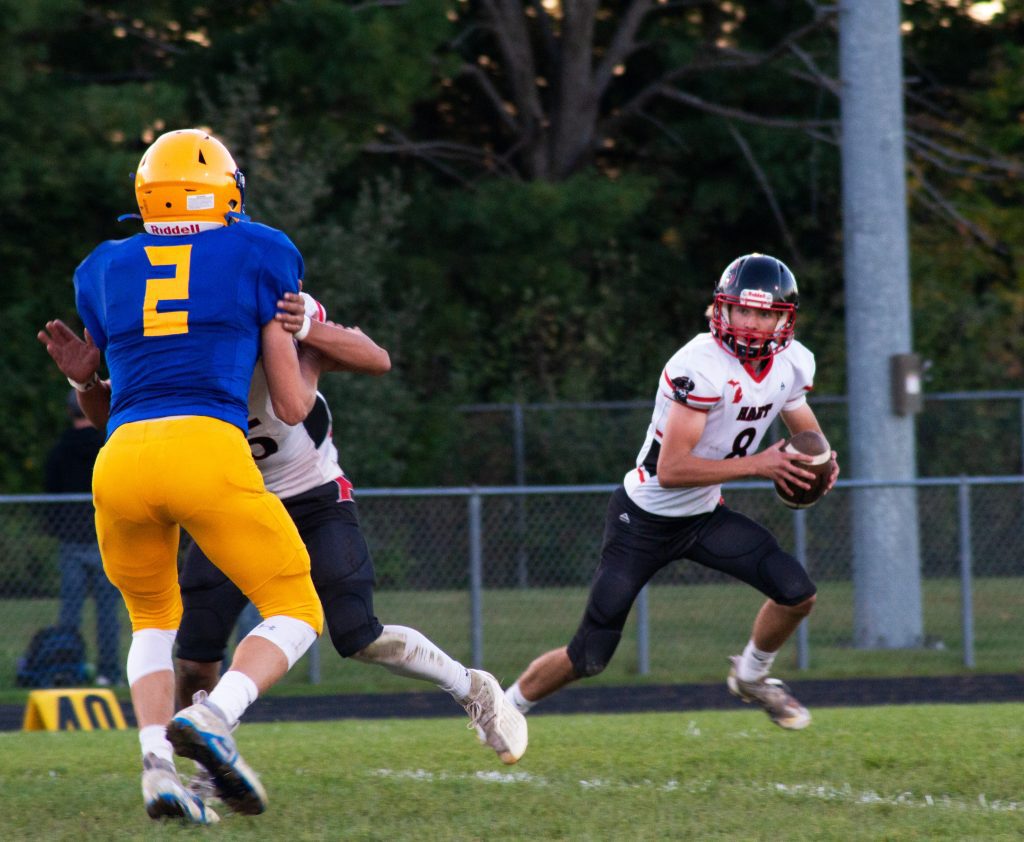 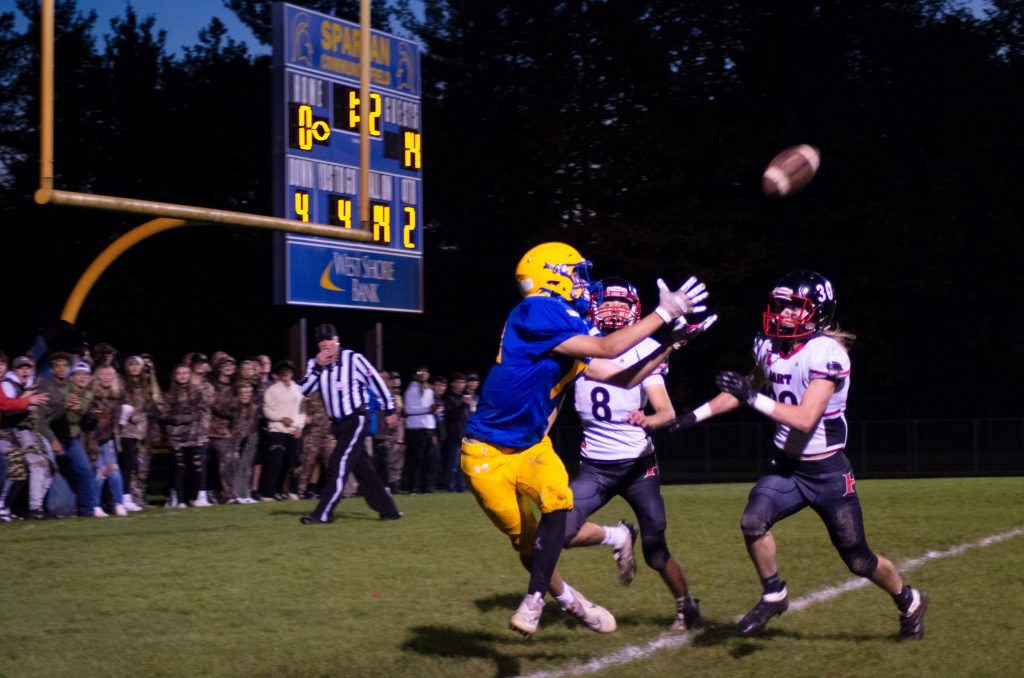 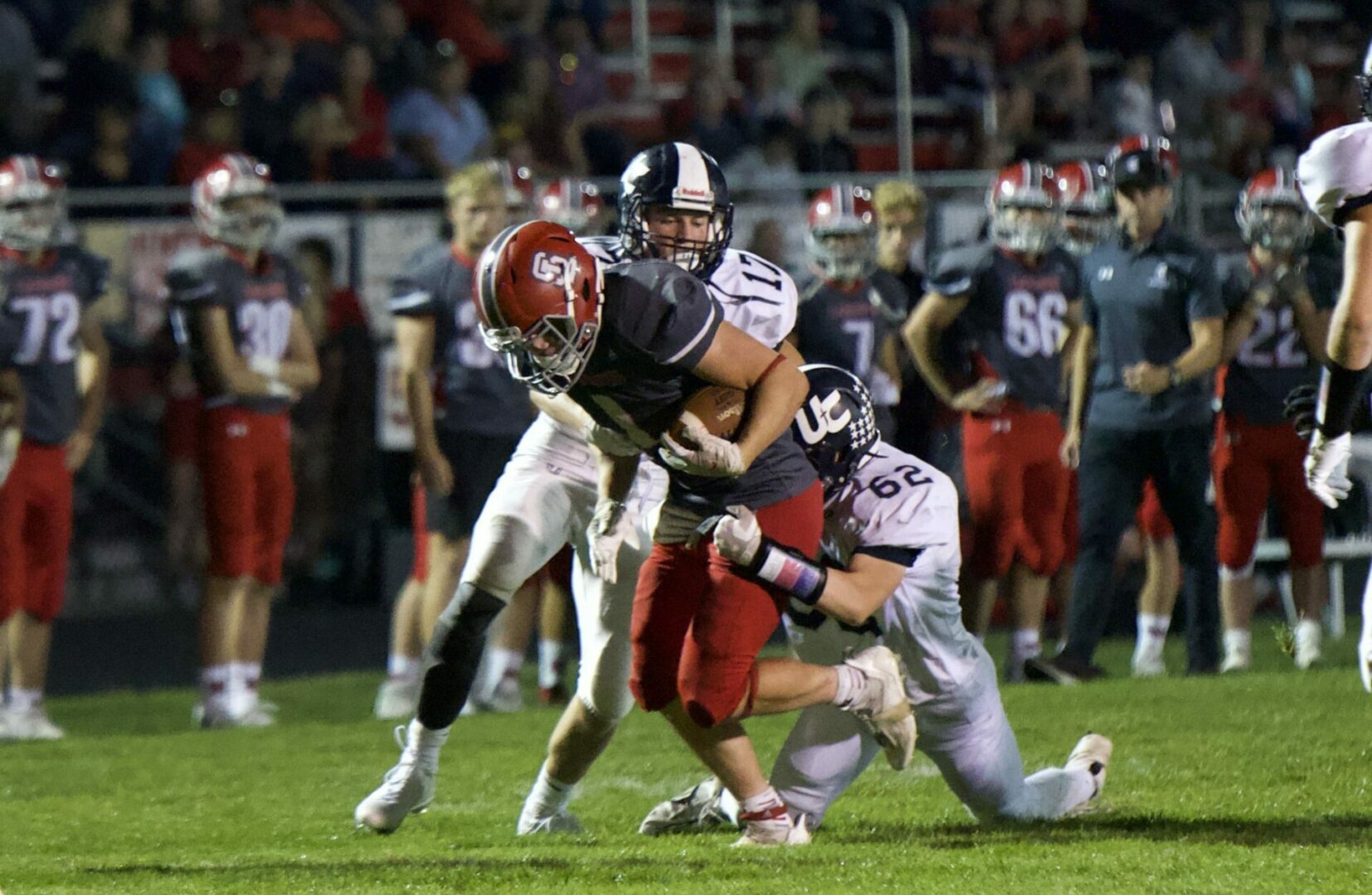