Homan’s quiet approach brings out the best in his swimmers 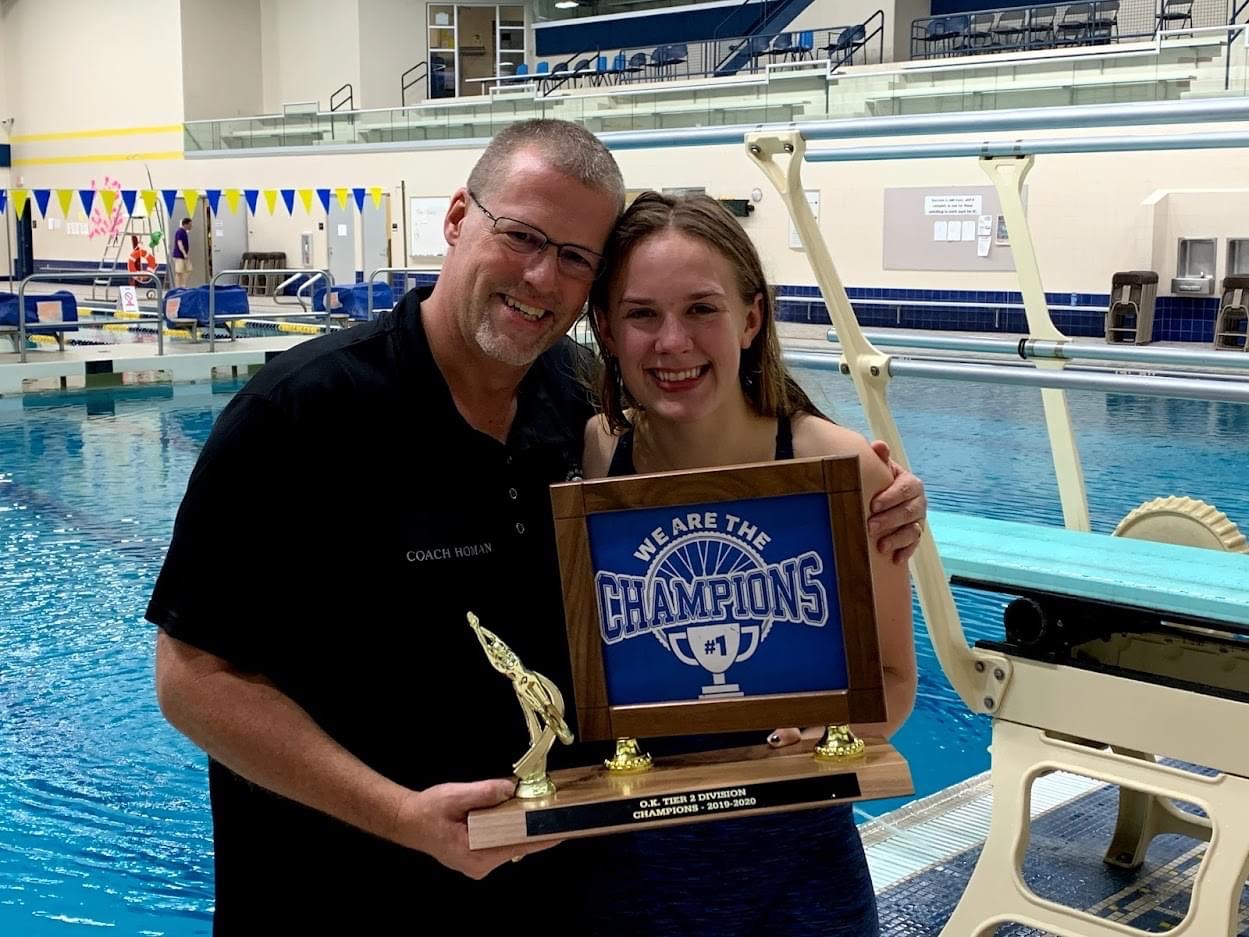 NORTON SHORES–There are varying modes of motivation that coaches revert to in an effort to get the most out of their teams.

There’s the boiling-red in the face drill sergeant types that try to get their point across by screaming or intimidation.

That’s simply not the persona of Mick Homan.

Granted, from all accounts of swimmers on his Greater Muskegon co-op swim team, past and present, the veteran coach does have high expectations for every single member, and his intensity in having them reach their potential is unmatched. But to help them reach their next personal best performance, he’ll turn to the power of positivity, not yelling.

“He’s so encouraging and I’ve never been around a coach that genuinely cares so deeply about his team more than Coach Homan,” said Western Michigan Christian junior Sydney Sytsema, a 50- and 100-yard freestyle sprinter. “People don’t realize how much he does behind the scenes as far as planning practices, creating lineups and workouts.

“He’ll say this a lot: ‘Just focus on the race ahead of you, nothing else,’” Sytsema added. “There’s things you can’t control, like the temperature in the air, temperature of the water, the size of the (starting) blocks. Don’t focus on the uncontrollables. Just focus on what you need to do.” 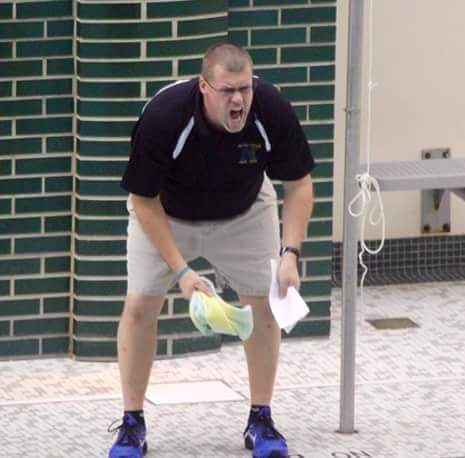 Homan, 55, must be doing something right, because his teams have enjoyed an impressive amount of success throughout his career, which this fall is his remarkable 34th season. His love for the sport began at an early age, motivated by an elementary classmate that brought in ribbons awarded in the sport for show and tell.

He fell in love with the competition in the water, which stretched from his days at Mona Shores High School (he’s a 1986 graduate), and two years at Grand Rapids junior college to his last two years collegiately at Grand Valley State.

“I tell my swimmers, in some sports like football, the offensive lineman is blocking for about 5-7 seconds and the play’s over. In swimming, it’s just continued action. It’s a sport you can do for a lifetime, whether you’re physically able-bodied or not. And it works every muscle in your body.”

His senior year at GVSU was also the first year he dove into coaching, helping out at Muskegon High School. He helped develop the Big Reds program for the next 11 years, before he accepted a position as the aquatics director at Grand Haven High School, as well as becoming an assistant coach for the Bucs.

Homan eventually departed for his first – and only – job on the east side of the state, as he spent just one year coaching at Bloomfield Hills Cranbrook, before returning west to start a co-op program with Muskegon Catholic Central, North Muskegon and Mona Shores. 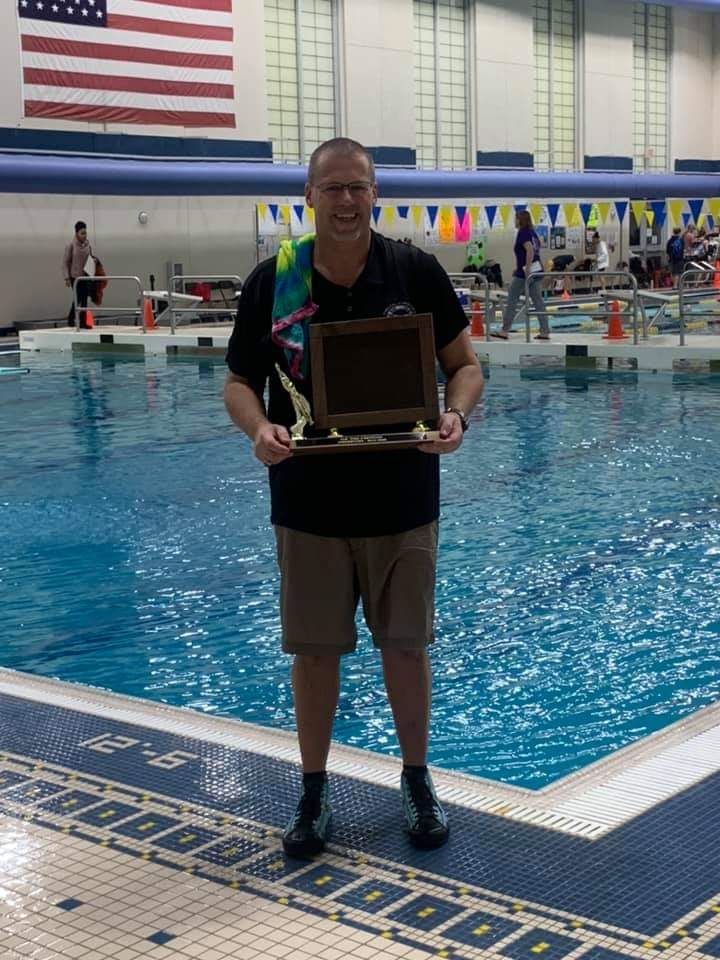 Despite venturing to the college ranks for a part-time gig at Aquinas College for a season a year ago, he’s been at the high school level ever since, but the co-op has expanded to a total of six schools, with Reeths-Puffer, Western Michigan Christian and Fruitport Calvary also fielding athletes on the squad.

He’s coached both boys and girls teams, but he’s now solely focused on the girls season in the fall.

Having swimmers from so many different schools can present challenges, he said, as they often have different release times, making start times for practices a little chaotic. He was also fretting recently because his squad of 26 was down six due to an orchestra performance.

“It’s frustrating as coaches with all the activities and distractions that we have to work around,” he said. “And I think kids got more going on in their lives than they ever used to.”

Still, he’s found kids are still more than ever willing to learn and strive for greatness. To reach that point, Homan jokes that he often warns parents that he’ll be sending their children home from practice grouchy, exhausted and hungry from the wear on their bodies from training in the pool.

“I don’t think I ever eat after a cross country meet, but I’m starving after swim practice,” said senior Robyn Hunt of Mona Shores, who stars in the 500-yard freestyle. “Even in the summer, during our optional training, he’ll work with us in an outdoor pool, or go to the gym at Catholic and work out. He even comes to our other sports, just to watch us. It just shows that he really cares about us.”

Even in his career outside of the pool, Homan is keen on helping others develop. He’s a life skills teacher with the Muskegon ISD, focusing on shaping young adults aged 18-26, most of whom are coming from special education classes in high school.

“We’re training them on daily life skills and thinking about helping them get jobs and lead productive lives,” Homan said.

“It’s so rewarding because you see the progress and these are young adults that are so very intelligent. Sure, there’s areas in their lives where they struggle, but they’re so intelligent. They definitely know what’s going on in the world.”

Seeing development from year-to-year also keeps the fire burning in Homan’s coaching career. He said he’s lucky to have a loving and supporting wife of 24 years, Susan, by his side but what keeps him coming back is seeing a freshman on Day 1 and the goals they’ve achieved by the time they’re a senior nearing the end of conference finals. A perfect example would be 2016 Mona Shores graduate Chase Ledsworth, who admitted he didn’t have his priorities in order during a majority of his high school career. It changed when Homan took over during his sophomore year and helped him focus on what was important both in and out of the pool.

“I’m sure I wasn’t the easiest kid to coach,” he said. “I was kind of a wild kid. I’d be late to practice because I’d be surfing all morning, or I’d show up to meets late because I was snowboarding. But my senior year, I really started to kick it into gear and started breaking records. Mick just has a way of making you go further or go harder. He doesn’t have to yell. Just the way he phrases his sentences, he’s able to get his point across and let you know what you need to do.”

Ledsworth said he wouldn’t be where he is today without Homan’s guidance. He’s currently residing in Jacksonville, Fla, and is a first responder officer in ocean rescue.

“All that swimming paid off,” Ledsworth said. “I’ve actually saved a lot of lives.” 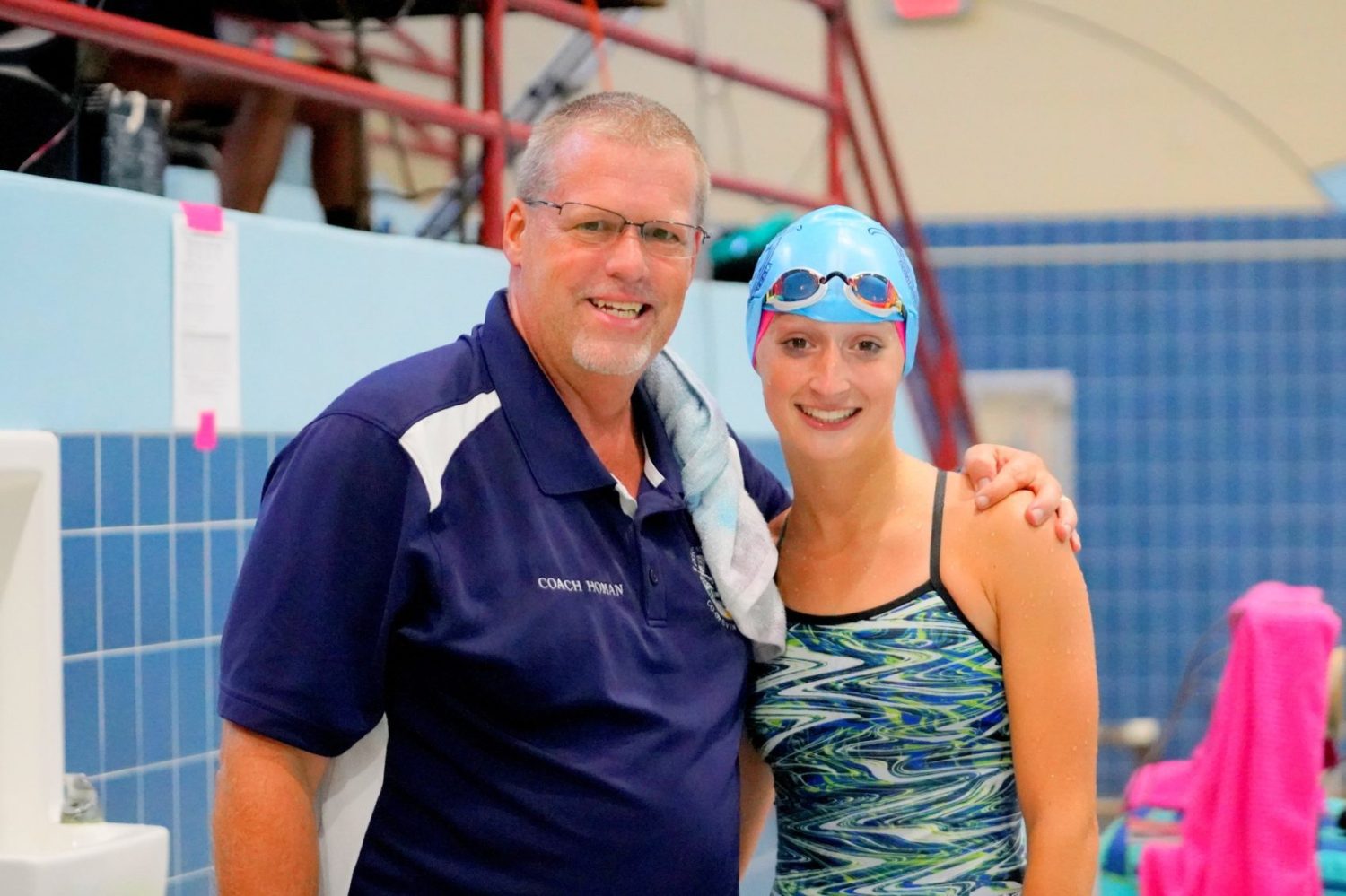 This season, Hunt, a two-time tri-captain, has shed nearly 30 seconds off her time in the 500, since her freshman year, with a current P.R. of about 5 minutes, 30 seconds.

“We’ll have these team talks in the locker room and he says this a lot, ‘Go out and give your best today. Don’t beat yourself down if you don’t get a P.R.’

“It’s super helpful because he’s not putting pressure on us to beat school records, but he just wants us to do our best.”

And when Homan’s teams push each other, team success comes, like in 2019, when the team went a perfect 12-0 in the O-K Red Tier 2 Conference. Their reward for that, Homan noted, was getting pushed up to Tier 1 the following year and having to compete against traditional powerhouses like Zeeland, Holland Christian and Hamilton.

Still, Homan said his favorite part of coaching isn’t the wins or losses, but seeing where his swimmers are 5-10 years down the road. Stories like Ledsworth, or those who are now doctors, lawyers or even coaching the sport themselves, he said, make the long hours at meets and practices all worthwhile.

“It’s a blessing to be able to coach student athletes and in 5 to 10 years, see them graduate from college, start a family or start a career,” he said. “Seeing what they’ve become, that’s why I do what I do.”