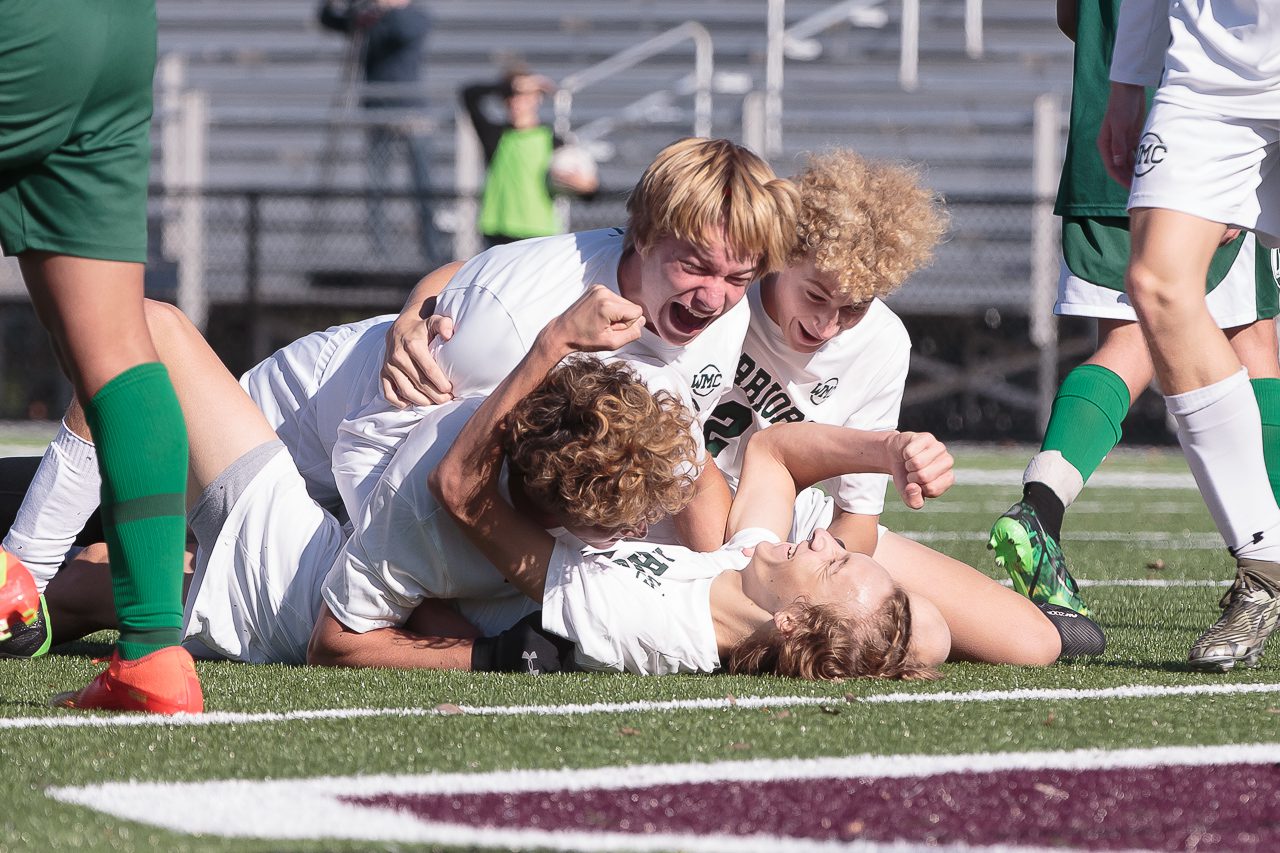 HOLLAND – Where there’s a will, there is a way to win. 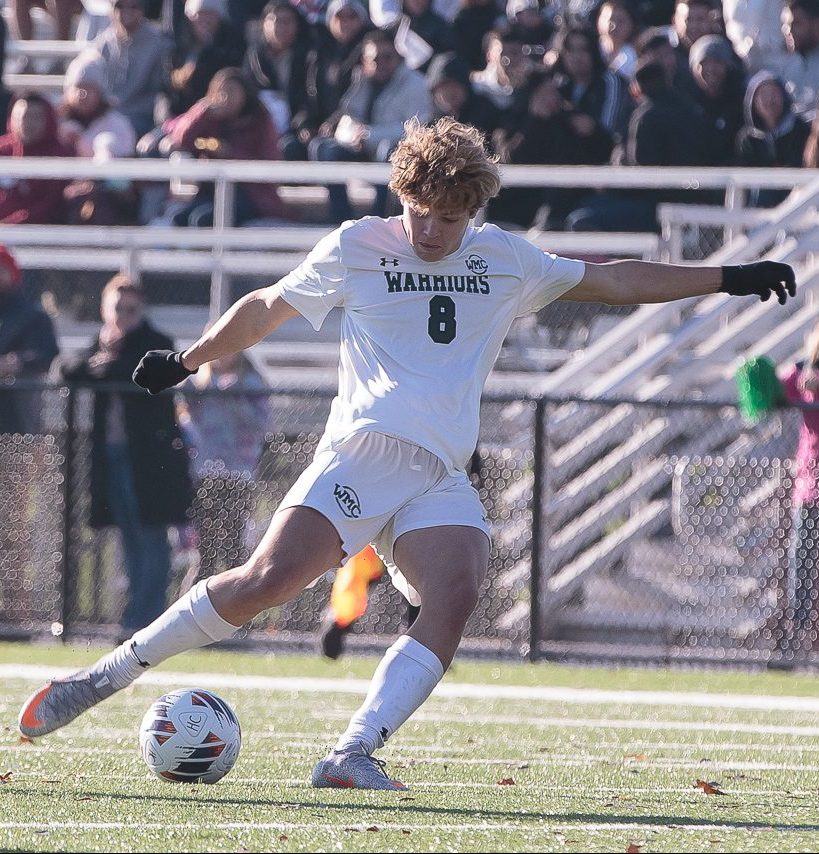 The Warriors pulled out an exciting, 3-2 victory over Hartford and captured the school’s first regional championship since 2019.  The game was played at Holland Christian High School.

“It’s amazing, this is my first time with these boys, this deep in the tournament, and man it feels good,” said an elated WMC coach Ben Buursma. “We’re excited to move on, but hats off to Hartford. They showed why they were ranked No. 1 all season long.”

The WMC senior duo of Ashton Leffring and Gavin Riksen, backed by a speedy defender in Jake Hwang, were just too much for the Huskies to contain.

Riksen lifted his Warrior team with the lone goal of the second half,and the game winner, with 8 minutes left to play. Leffring set up the tally with a perfectly placed drop pass to Riksen who then dribbled through a back-peddling Hartford defense and laced a shot into the net.

The dramatic victory sends the Warriors into Wednesday’s state semifinal against a familiar foe, Leland. WMC lost to Leland, 1-0, earlier this season and was stopped by the Comets in the regional semifinals in 2020.

The Warriors started out with their backs against the wall by allowing an early goal by Hartford’s Caiden Smith. 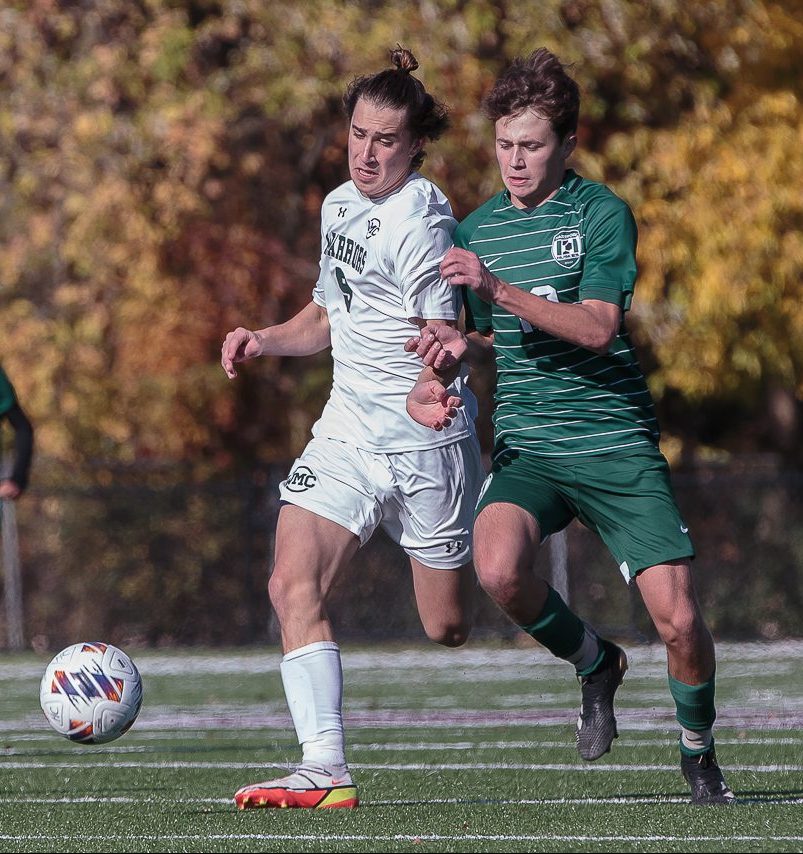 After Smith’s goal, Warrior defensive specialist, Hwang, put the clamps down on the Huskies’ talented forward and limited him to very few opportunities from that point on.

“We put Jake on him,” said Coach Buursma about the adjustments he made to contain Hartford’s top offensive threat. “He was obviously their playmaker in the last game we saw (in the regional semifinals against Calvin Christian). Smith is a tremendous talent and we knew we had to match his speed and toughness and Jake was the man for that.”

WMC’s Leffring responded 10 minutes into the first half after Riksen sent a stellar through pass down field and out of the reach of the Hartford defense. Leffring took the pass and blasted in a shot from 20 yards out. That tied the game at 1-1.

“They’re a very good team, with some dangerous guys up top, but you just have to play fast,” said Leffring, who now has 22 goals and 18 assists this season.

Leffring again froze Hartford’s defense with just under 10 minutes left in the first half on a direct kick from just outside the 18-yard line for a 2-1 lead. Leffring’s kick wrapped its way around a Hartford wall of players and into the corner of the goal.

“He (Leffring) is a special talent, he’s been doing that for us all year,” said Buursma. “He and Riksen have a history together, they mesh well. This group is on a mission.” 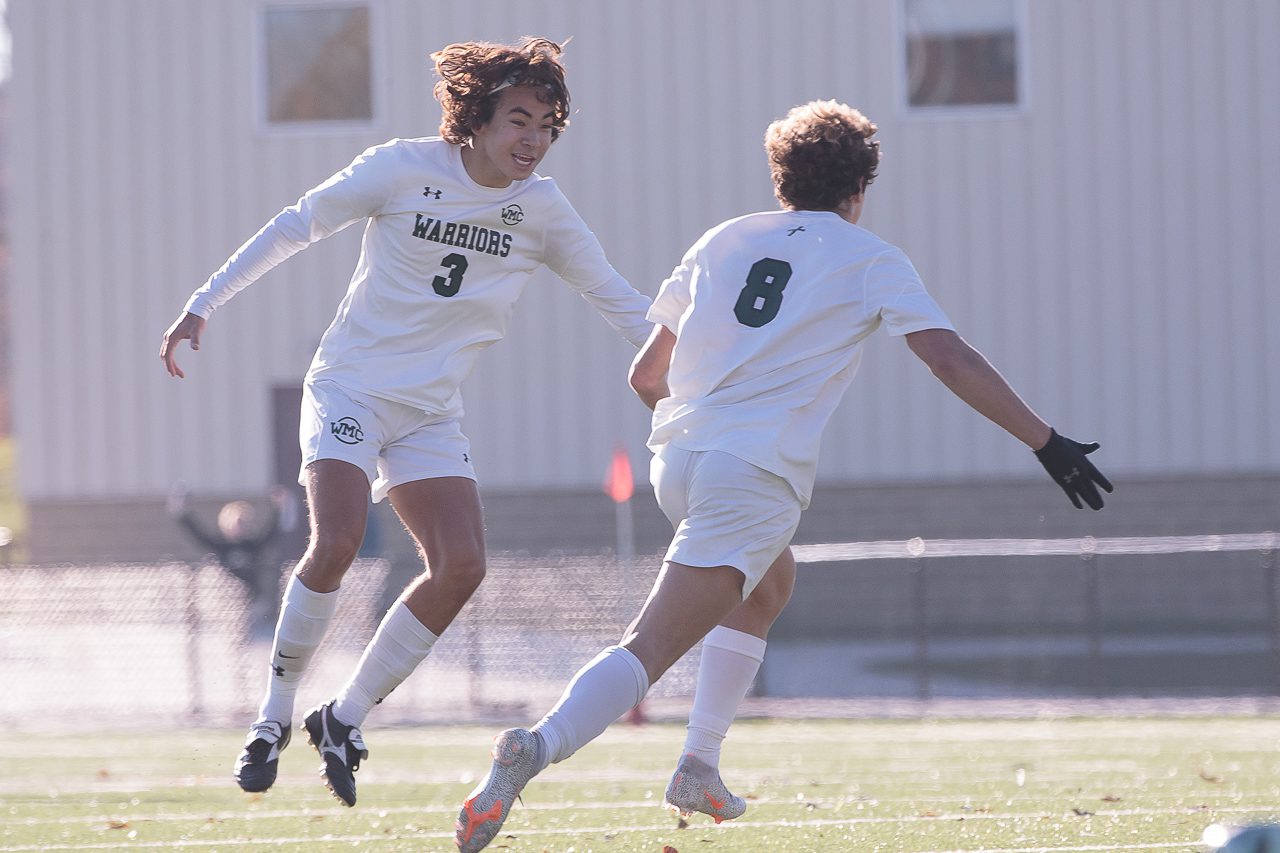 No. 3 Jake Hwang celebrates with Leffring after a Warrior goal. Photo/Randy Riksen

Riksen aided in the play, getting fouled by a Hartford defender while on the attack.

The Warriors couldn’t hold onto their lead as the Huskies’ Alan Gonzalez blazed past the WMC defense with 5 minutes left before halftime. The senior sent a shot past a charging Jared Olsen, who couldn’t make the save, and the game was tied at 2-all.

The second half was played nearly even between the two teams as both teams earned four shots. But it was Riksen and Leffring who proved too much for the Huskies to hold down.

“It’s very exciting, gotta do what you gotta do to finish the game,” said Riksen about his game-winning goal (18th of the season). “It means a lot to get this far twice in my 4 years at WMC.”

Riksen and Leffring’s chemistry was shown all game as the two set up one another multiple times. Both seniors were on WMC’s state championship team in 2019 as Leffring played the entire season, while Riksen was pulled up for the tournament.

“It’s nice to have a guy to pass to who can score like that,” Leffring said of Riksen. “It’s great, he scores on like everything.”

The Warriors outshot Hartford 10-7 in the match as Olsen made five saves in the win.

Western Michigan Christian is now 14-8-1 and is just one win away from reaching the state finals for the first time since its 2019 state championship. 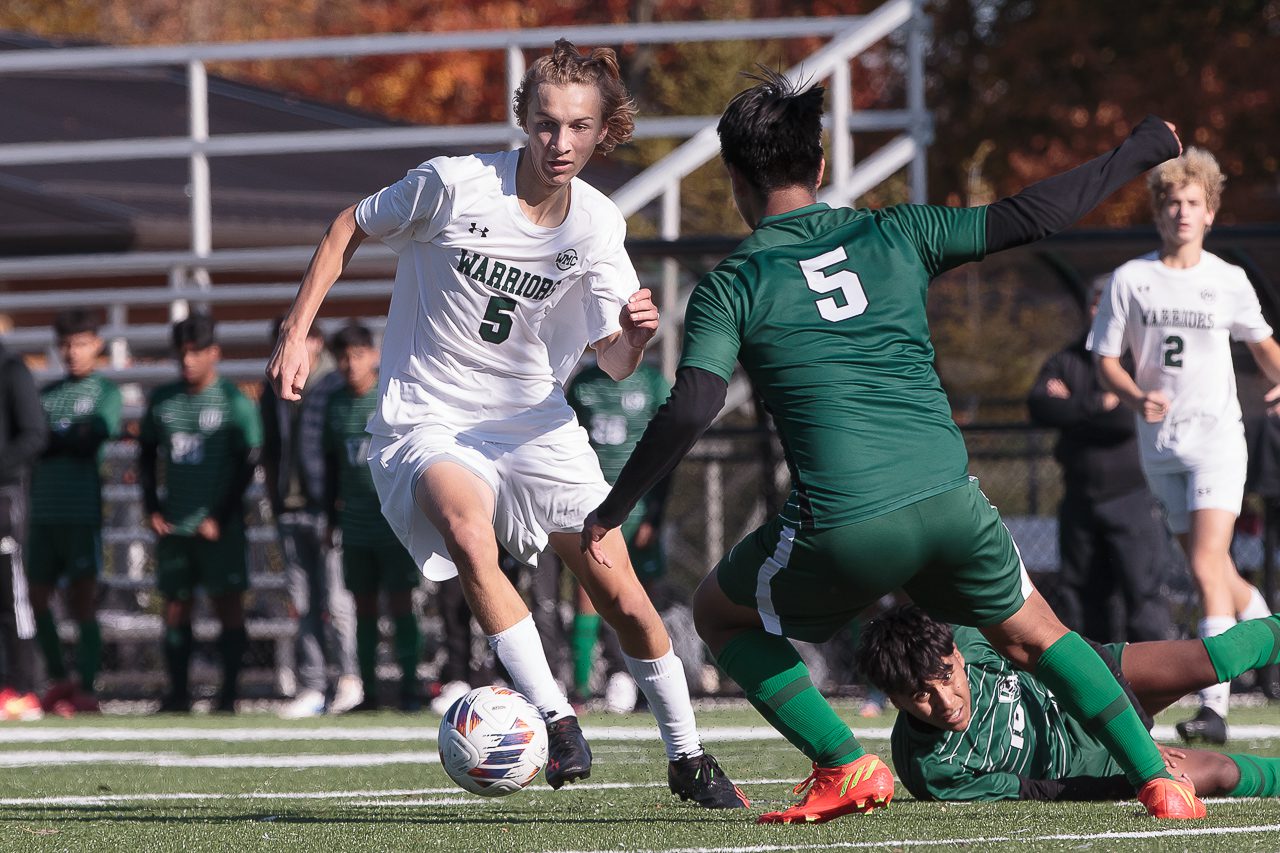 No. 5 Gavin Riksen dribbles through the Hartford defense. Photo/Randy Riksen 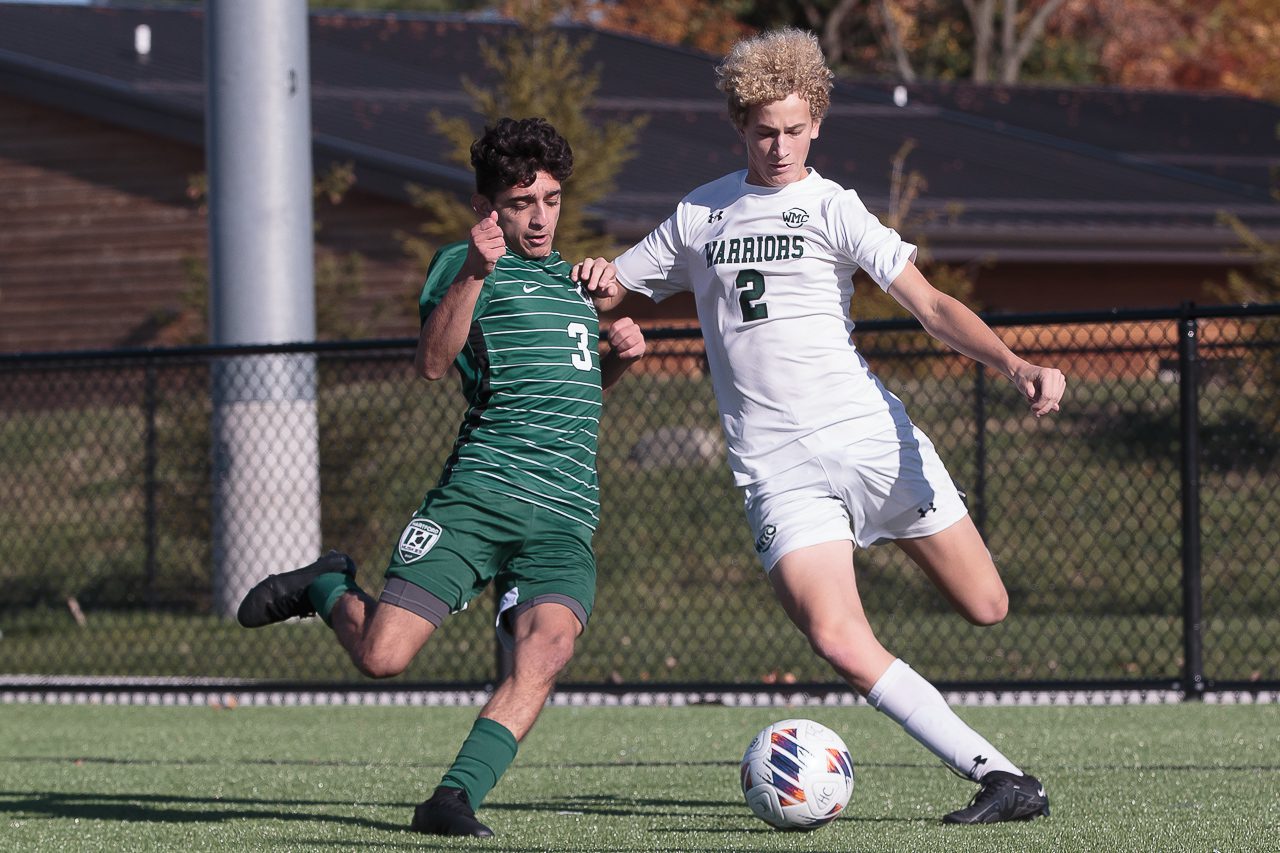 Gavin Riksen celebrates underneath a pile of his teammates after scoring the game-winning goal for WMC. Photo/Randy Riksen 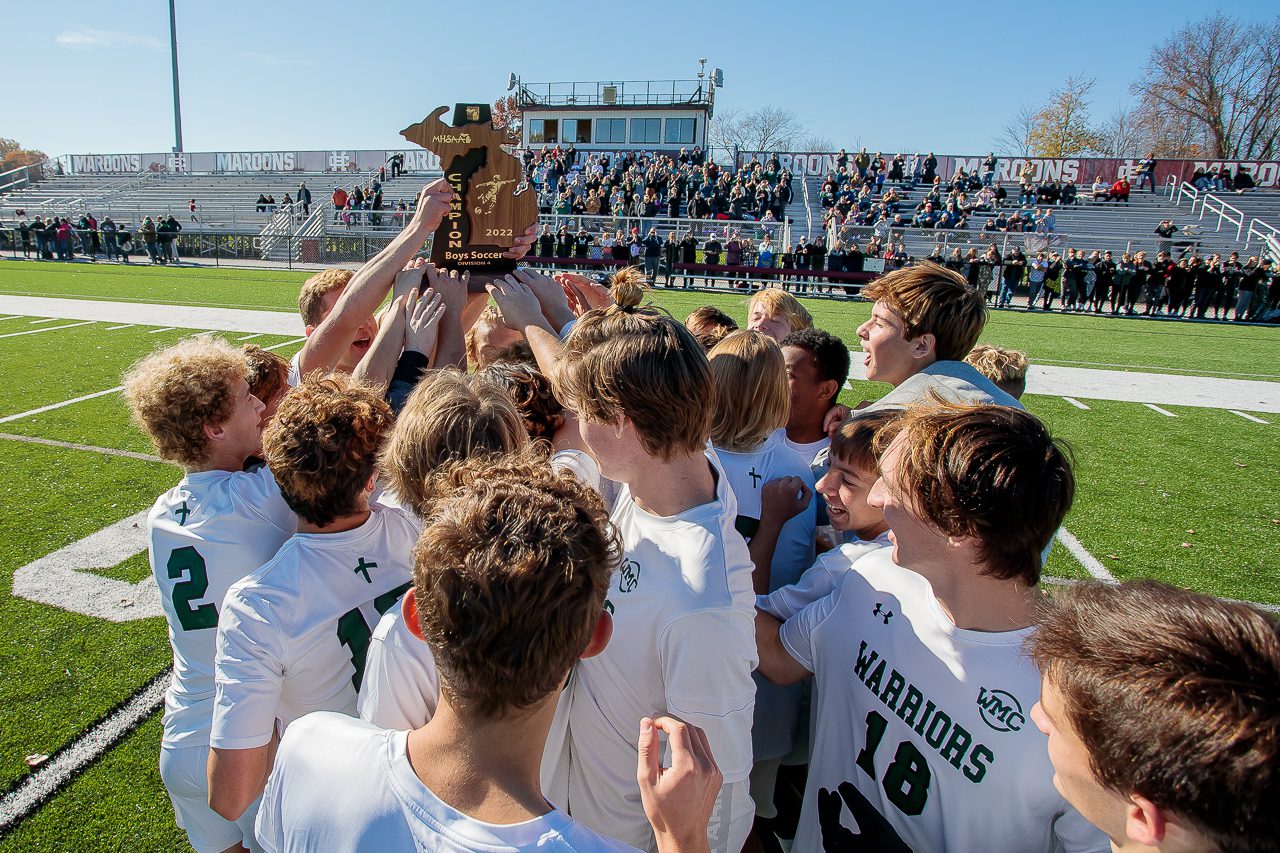 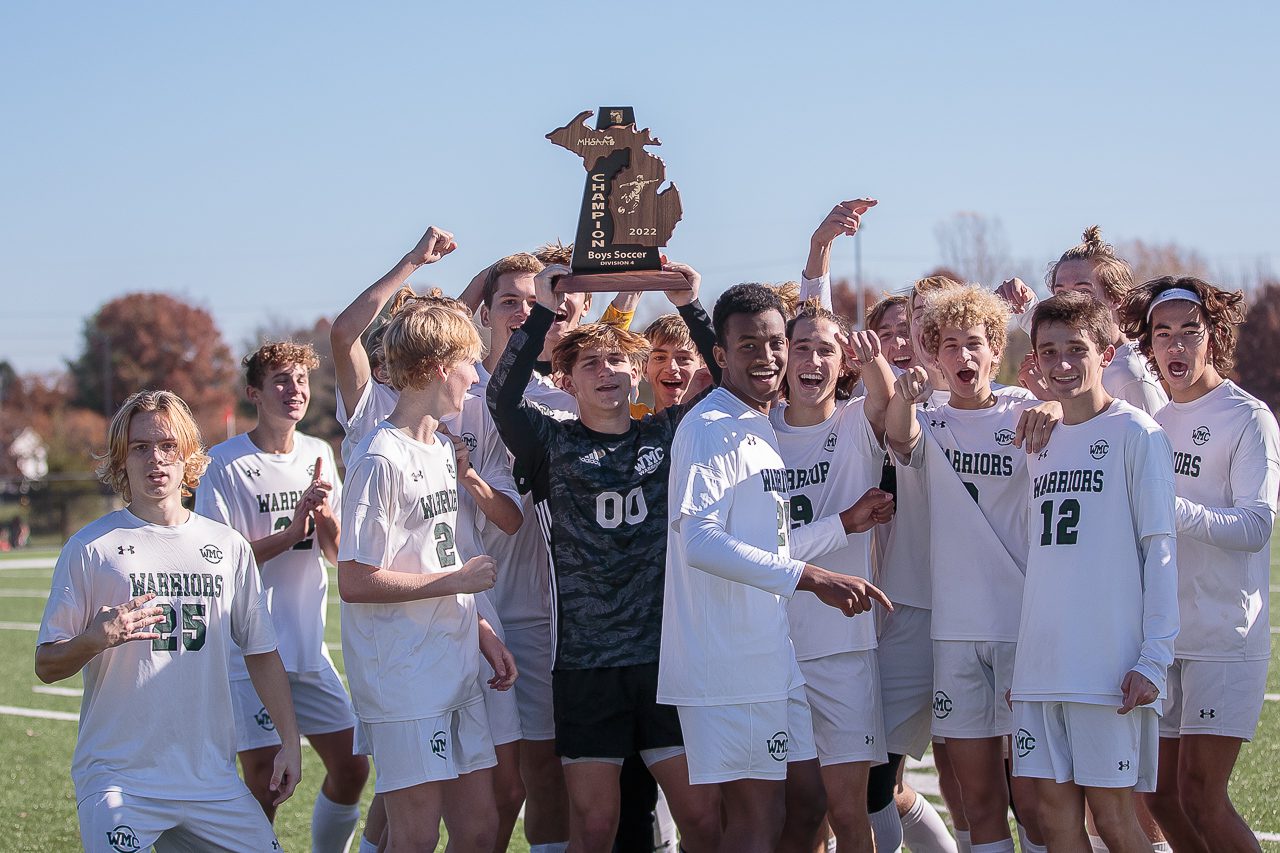 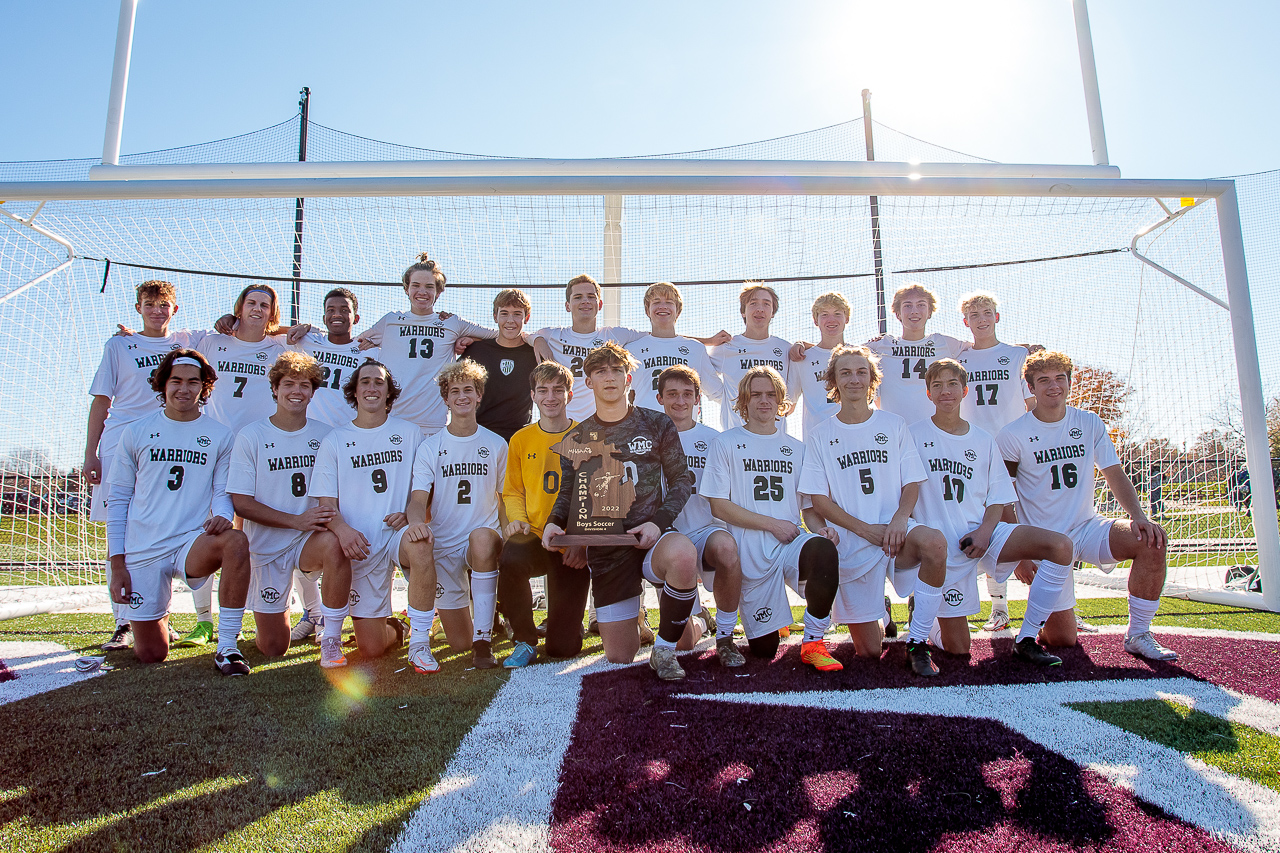 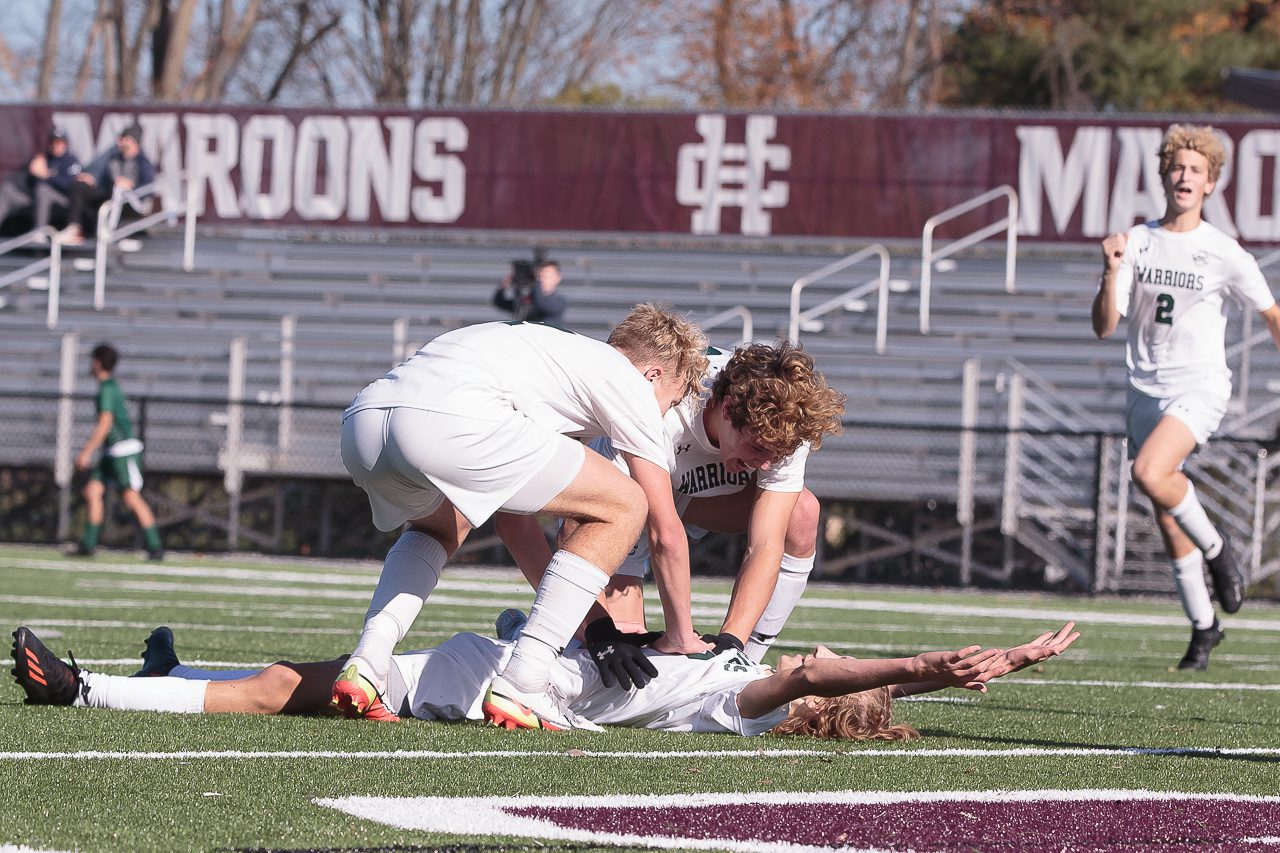 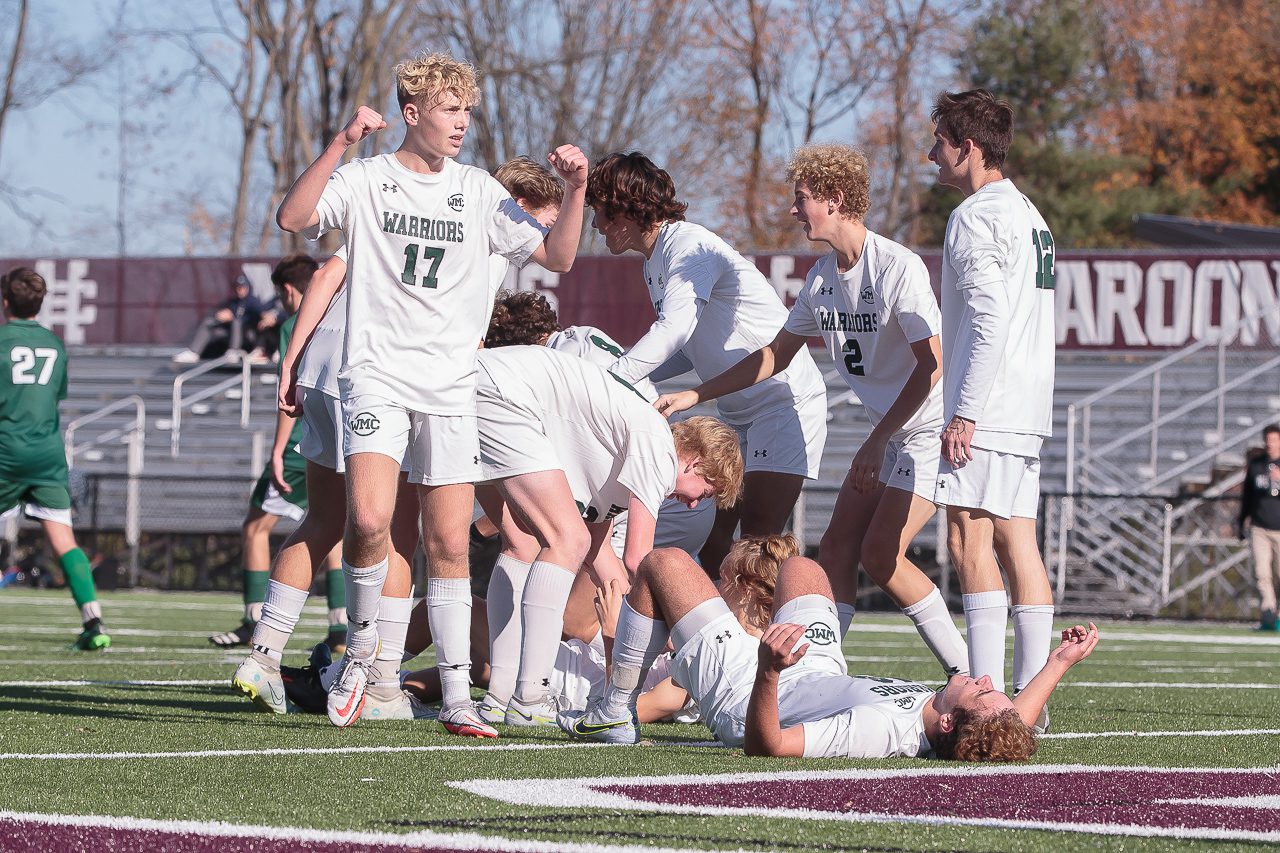 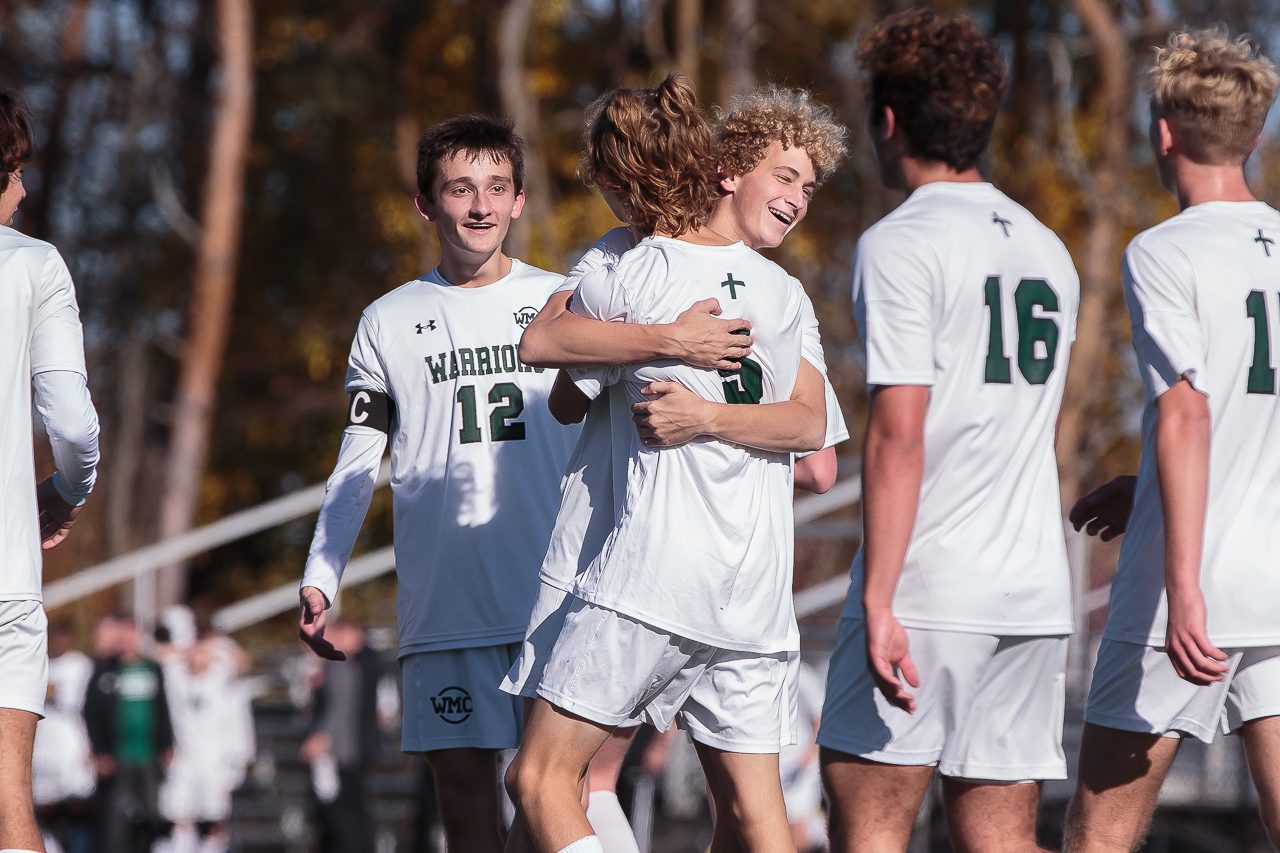 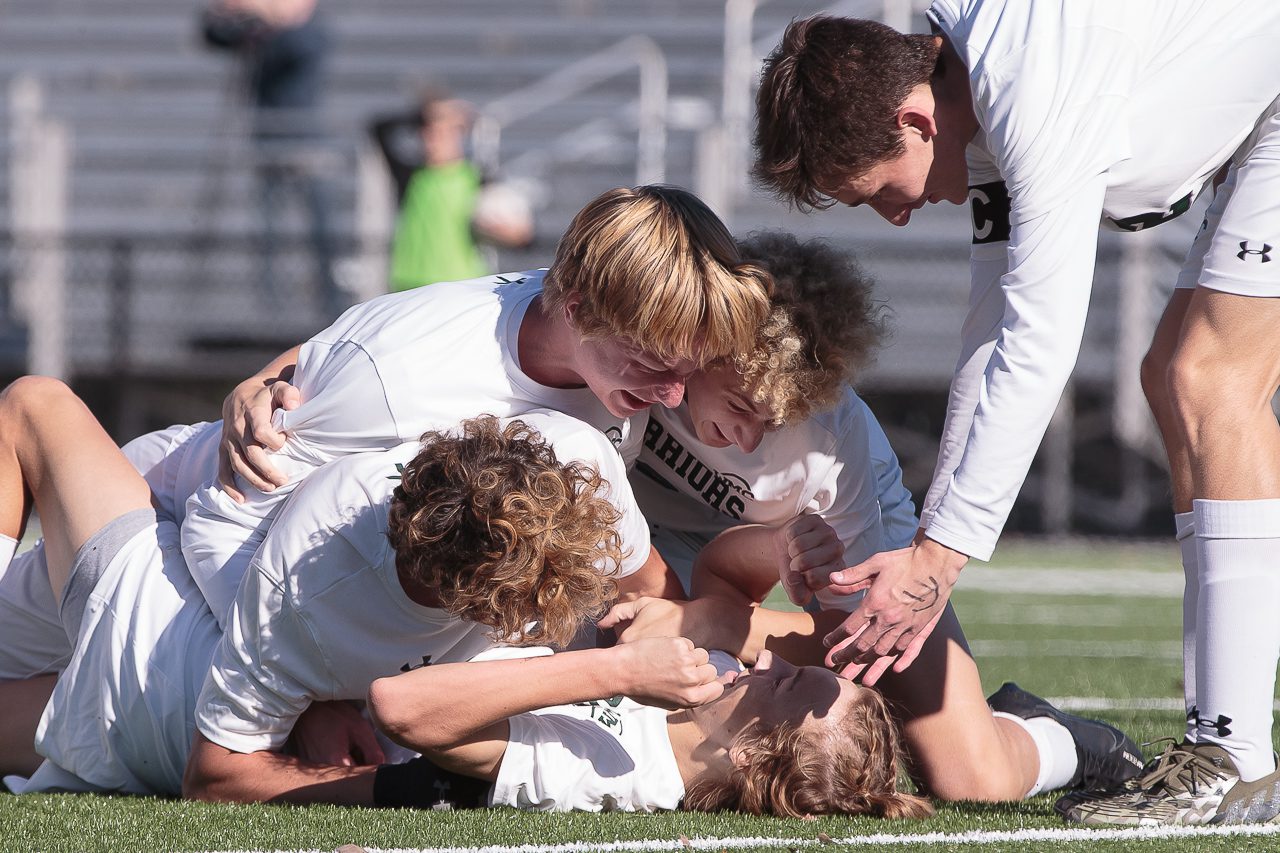 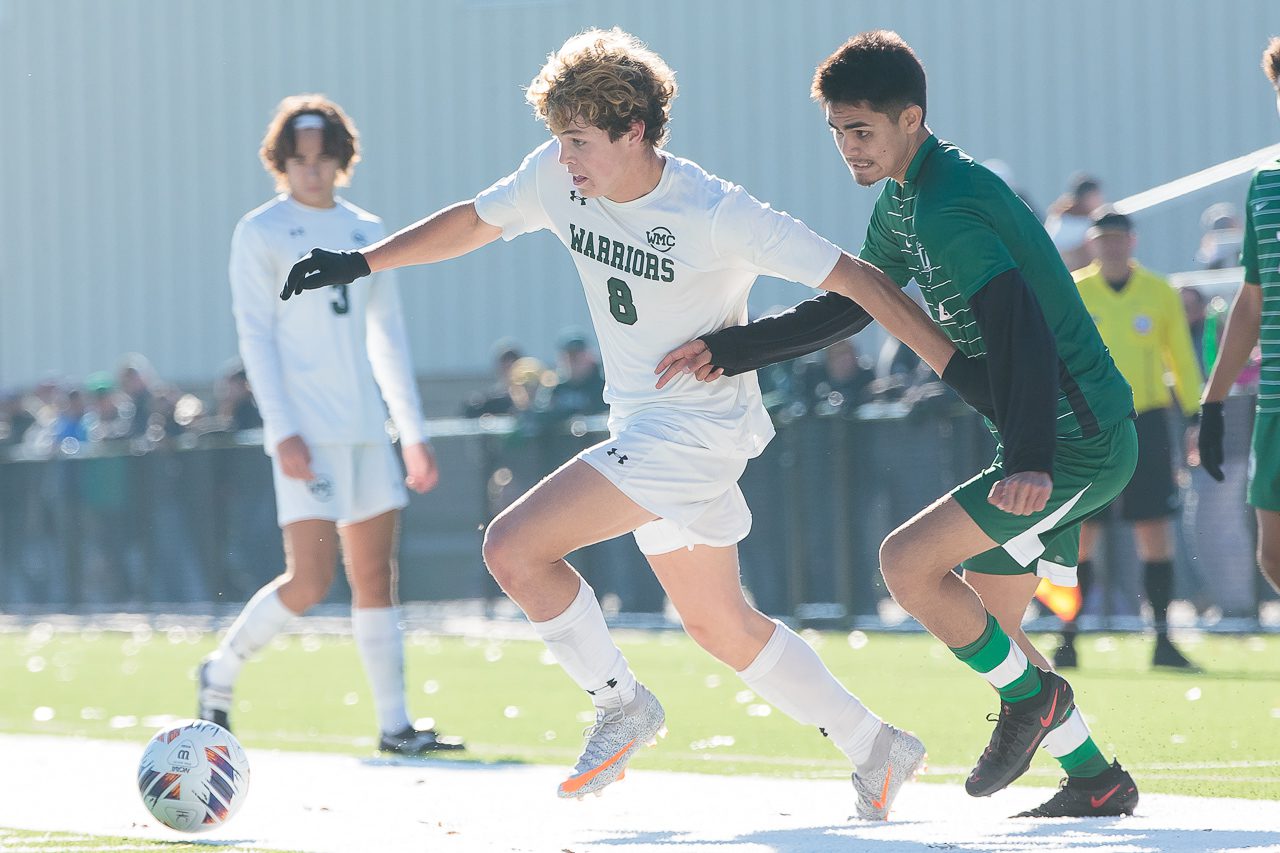 No. 8 Leffring moves the ball past the Hartford defense. Photo/Randy Riksen 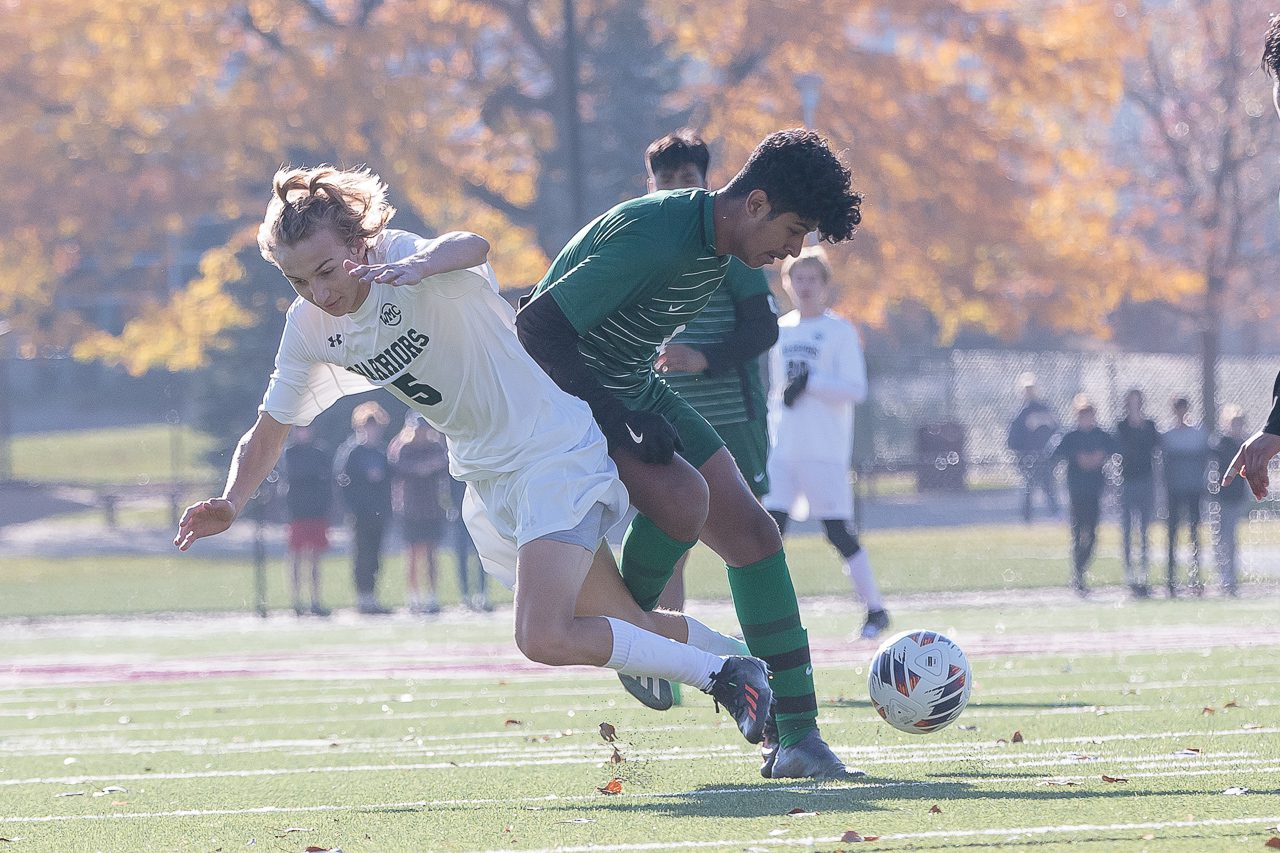 Gavin Risken gets sent to the ground by a Hartford defender. Photo/Randy Riksen