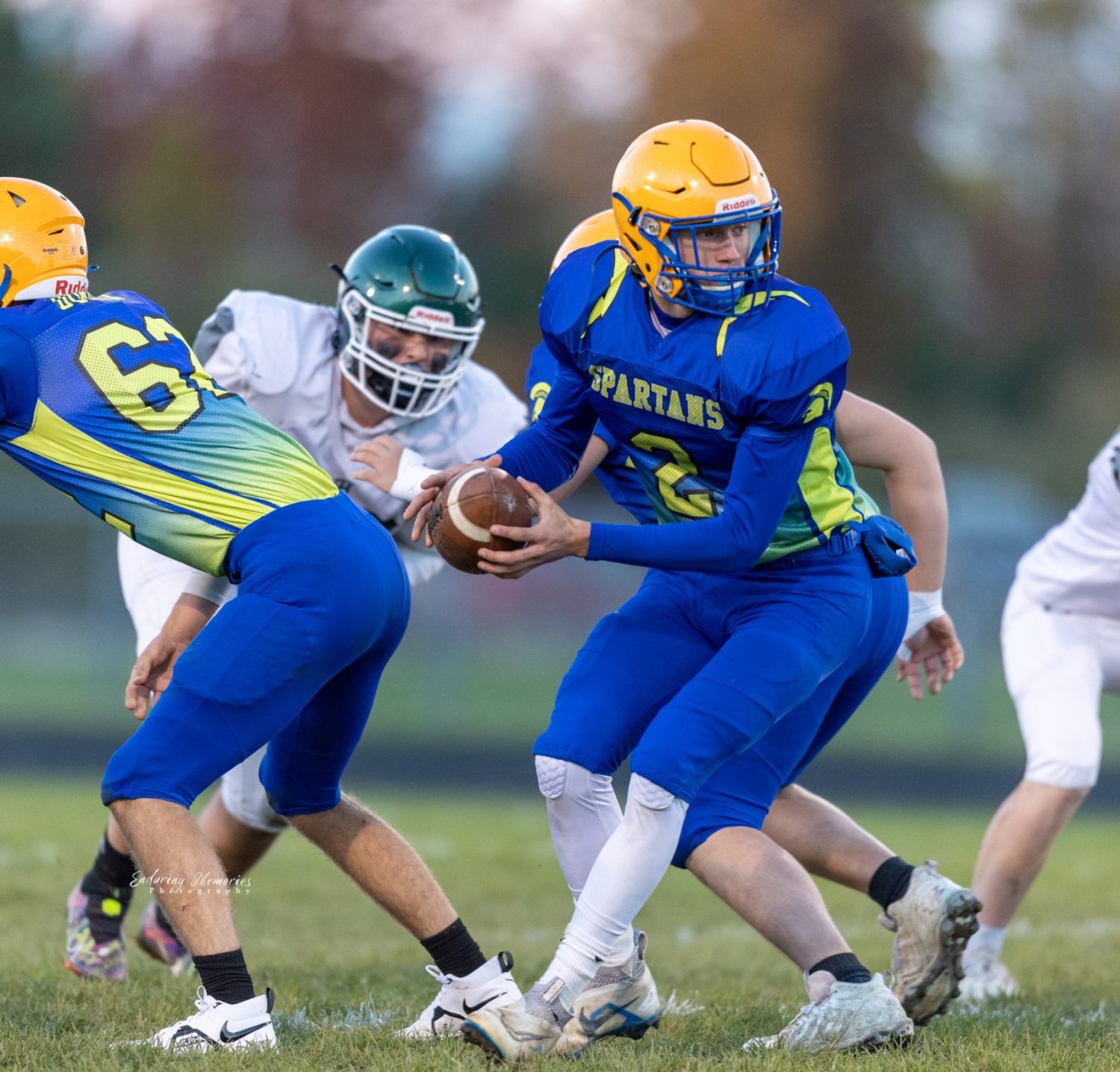 But it took the Spartans some time to get rolling offensively, going scoreless in the first quarter which ended in a 0-0 tie as the defense started out strong from the start.

Sputtering on offense early, the Spartans failed to pick up a first down until finally catching fire late in the period and carried over into the second.

Peyton Merz broke the scoreless draw when he capped the drive with a rushing touchdown 9:24 before the half. After that, it was off to the races for the Spartans.

The Spartans would wind up scoring 29 points in the second quarter to provide their home fans with plenty to cheer about before the homecoming ceremonies commenced during the intermission.

“It took awhile to get going, but once we did it was on,” Spartans head coach Scott Briggs said. “Part of that was defense that put the offense in some pretty good situations with some turnovers that we created.

“So that was a big key to the game. We had three interceptions and two fumble recoveries. The defense came through. We only gave up 16 yards rushing.”

While the defense stuffed the Panthers offense, the Spartans offense ground out 217 yards rushing and 91 passing for 308 yards of total offense on 49 plays.

The Spartans scored 14 points in the second half, one touchdown in each of the last two quarters.

Merz finished the game with 125 yards on the ground in 12 carries and scored three touchdowns. Jayden Perrone also punched one into the end zone and rushed for 12 yards on five carries.

Kaiden Cole picked up 28 yards on four attempts, and quarterback Will Chye rushed for 16 yards on five tries.

Chye completed 6-of-12 passes for 91 yards and a 26-yard touchdown strike to Landon Smith. Cole hauled in two passes for 41 yards and Merz caught one for 12.

Chye had two pass interceptions, and Merz picked off one for the defense. Graydon Wilson and Keenen Kelley each had four tackles. Kolden Meyer had one tackle for loss.

“We seem to play well at times. We just need to get more consistency. I guess we have to work on the first quarter now. We haven’t got that complete game yet.

“It was a great win for the homecoming crowd and the kids, who have their homecoming dance tonight (Saturday). It sets a nice mood for that. It’s the last home for the seniors on that field. A good memory.”

The win snapped a two-game losing streak for the Spartans, who improved to 2-5 overall and 2-3 in the conference. Mason County Central visits Shelby next week for another conference game.

Hesperia fell to 1-6 overall with its fifth straight loss, and dropped to 0-4 in the conference. The Panthers have to travel to Hart for a conference game with the red-hot Pirates next week.