Mona Shores defense comes up with a shutout over Reeths-Puffer, 15-0 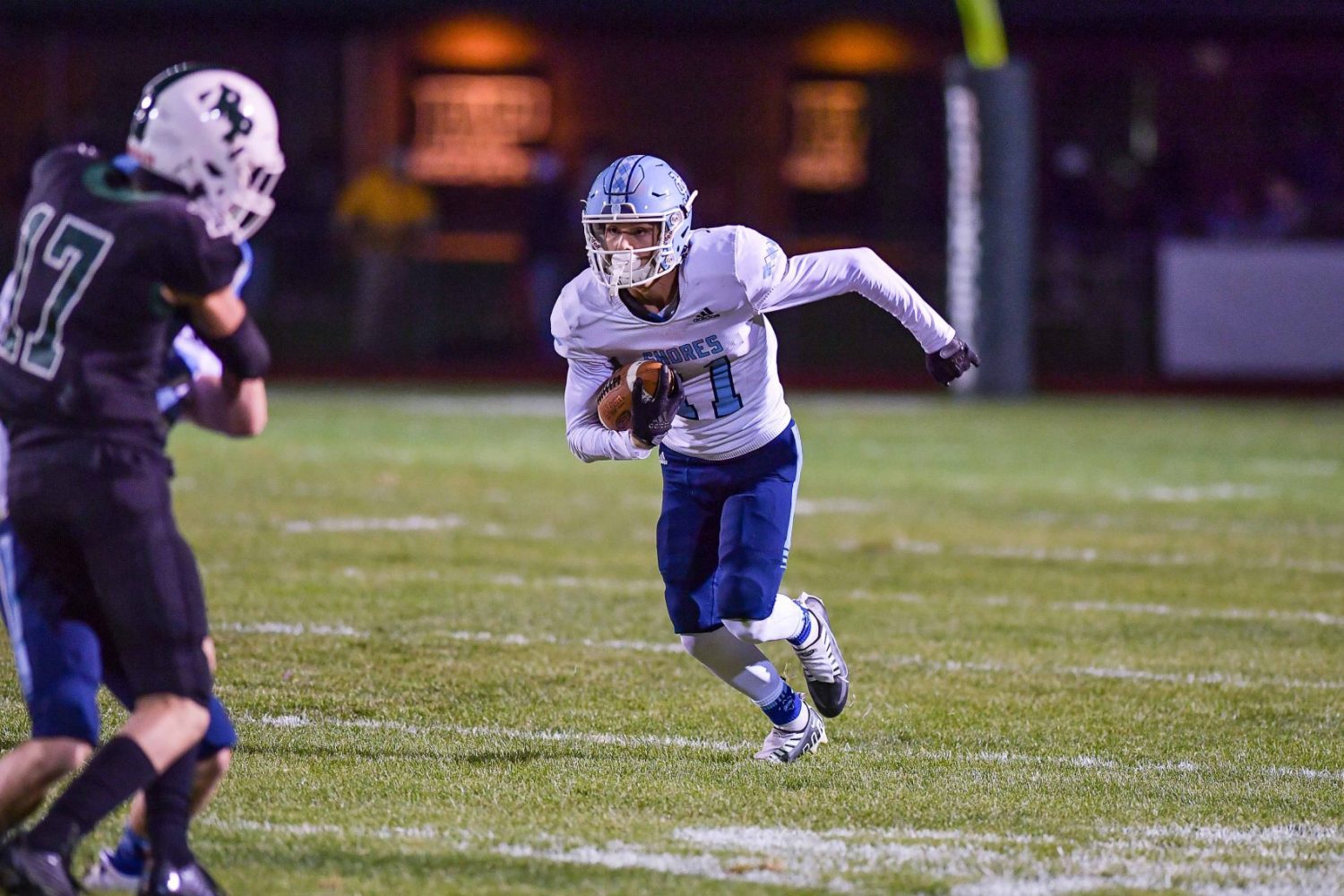 MUSKEGON–Mona Shores had its usual stars on the field, but on a rainy Friday night in an old-fashioned defensive slugfest, it was the supporting cast which grabbed the headlines.

Octavio Alvarado and Brandon Bankard made the biggest plays for the Sailors in a hard-fought, 15-0 victory over Reeths-Puffer at a packed Rocket Stadium.

“That was some smash-mouth football out there,” said Mona Shores coach Matt Koziak, whose team had averaged 51 points in its past five games.

“Reeths-Puffer played great and took away our between-the-tackle plays, so (Shores quarterback Jonathan) Pittman had to run it quite a bit. It was an ugly win, but we will take it.”

Mona Shores (7-1, 6-0) clinched at least a share of the OK Green Conference title with the win and gave Koziak his 99th win in his 12 years as the Sailors’ coach.

Shores can win the title outright and give Koziak his 100th win next Friday night at historic Hackley Stadium against Muskegon (6-2, 5-1), which has two weeks to prepare after a forfeit win Friday night over Holland.

Reeths-Puffer possessed the ball most of the first half, twice marching deep into Sailor territory and twice failing to convert on fourth-down situations.

Shores took a 3-0 lead into halftime on a 26-yard field goal by senior Kaden Pulaski on the final play of the half.

Just as play resumed in the third quarter, a cold, heavy rain started to fall and it felt like a turnover or a big specials teams play could determine the outcome.

That is exactly what transpired, as Puffer quarterback Brady Ross dropped back into punt formation with 4:26 remaining in the third quarter, but as he went to punt it away, Alvarado – a backup defensive end who came into the game after starter Andrew Baker was injured – charged in unblocked and smothered the kick.

“He has a nice welt on his forearm after that one,” said Koziak. “What a great night for him. That’s a senior who doesn’t play a whole lot, but he works hard and was ready for his opportunity tonight. He came through for us.”

Bankard scooped up the ball after the blocked punt and sprinted the remaining 30 yards to extend the Sailors’ lead to 9-0.

Bankard, a senior outside linebacker who also averages more than 10 yards per carry as a backup running back, made one final big play, intercepting a pass midway through the fourth quarter to ward off Puffer’s comeback attempt.

“Brandon was voted one of our four team captains by his teammates and he’s just a very unselfish kid,” said Koziak, who lauded the preparation of his defensive coaches, led by coordinator David Check. “We knew they liked to throw that underneath stuff and Brandon just jumped in front of that one.”

Shores put the game away on the ensuing drive, with Dahmir Farnum running behind the strong left side of junior tackle Luke Emmons (6-3, 315) and junior guard Jeremiah Love (5-10, 290) on a 7-yard scoring run.

Reeths-Puffer (5-3, 3-3), which plays at Lansing Everett next week, executed its game plan to perfection in the first half – mixing up the run and pass and controlling the ball – but couldn’t finish two drives in Shores territory.

Ross completed 6-of-21 passes for 97 yards, with two interceptions. Tayte Vanderleest caught four passes for 29 yards and Brooks Johnson had a 45-yard reception on a flea-flicker pass from Vanderleest.

Ross was R-P’s leading rusher with 16 rushes for 86 yards, many of those on scrambles when no receivers were open down the field. Brody Johnson carried 16 times for 59 yards.

“Our defense was lights out,” Koziak said. “Our defense is 11 dudes who all do their jobs. I could tell this summer that our defense was further along and better than it has been. They are allowing less than 10 points per game.”

Puffer did a good job of containing the Sailors’ two main weapons, Farnum and senior wideout Jaylen Vinton, forcing Pittman to carry the ball more than he has in any previous game this season.

Puffer junior linebacker Caiden Bolduc, who came into the game with an area-best 92 tackles, made 14 more tackles on Friday. Vanderleest made eight tackles, while Tyviea Williams and Bryce Ross each had seven stops. 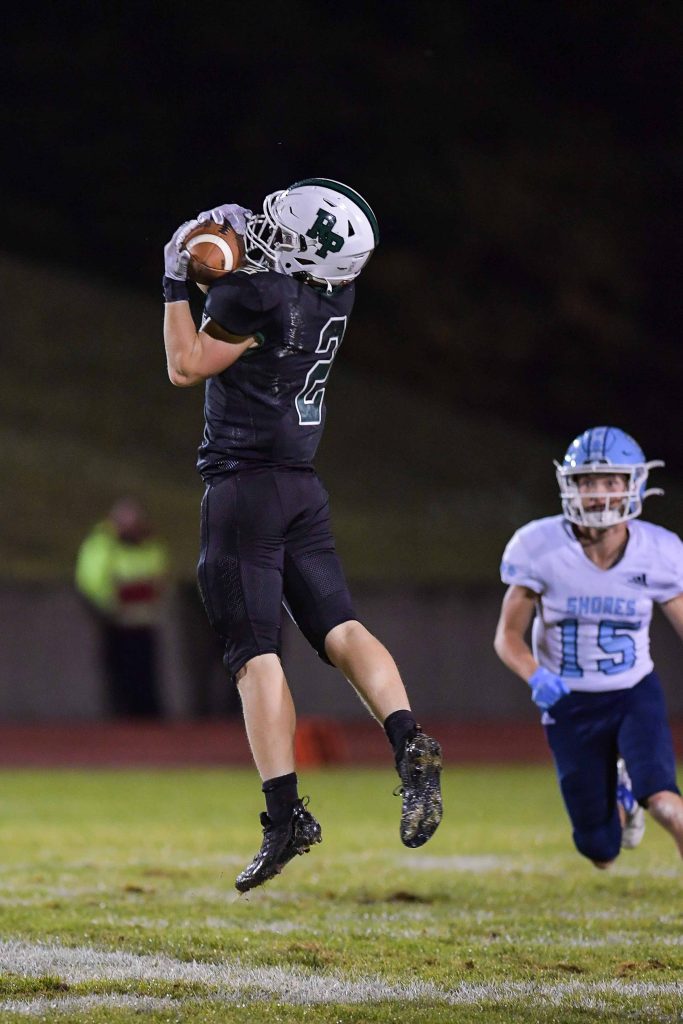 Bryce Ross leaps to make a big catch across the middle for the Rockets. Photo/Eric Sturr 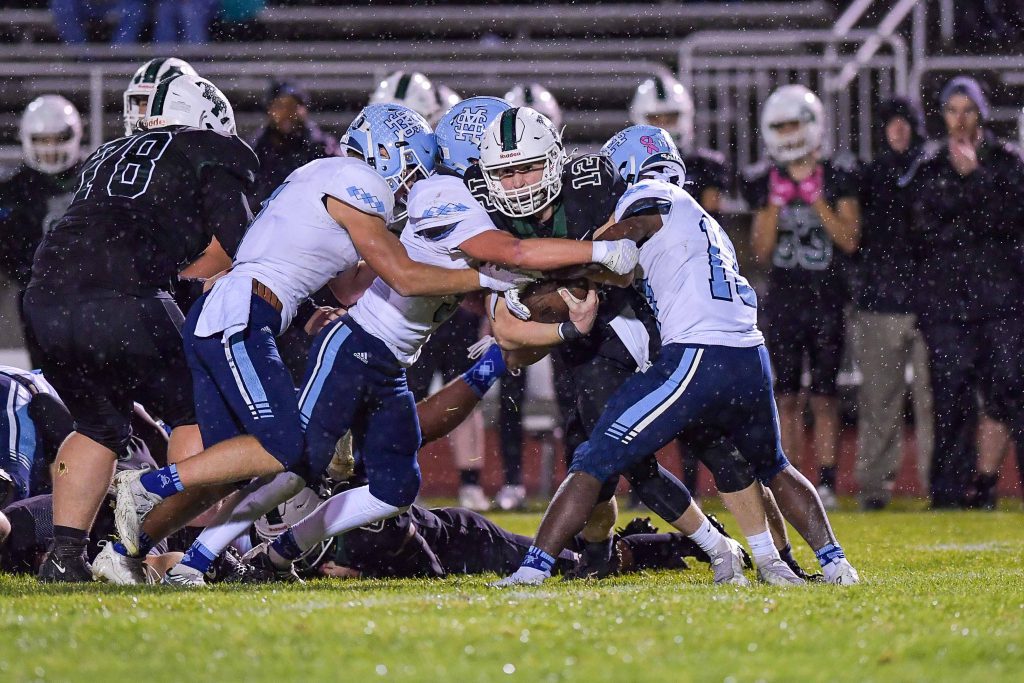 Brady Ross is piled up by a few Sailor defenders. Photo/Eric Sturr 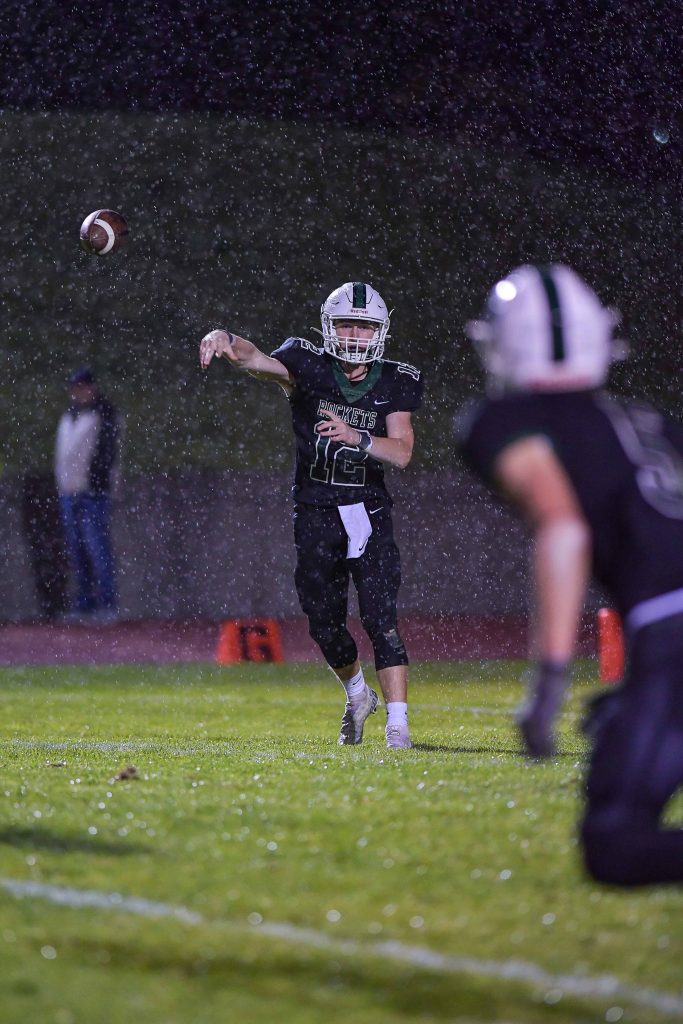 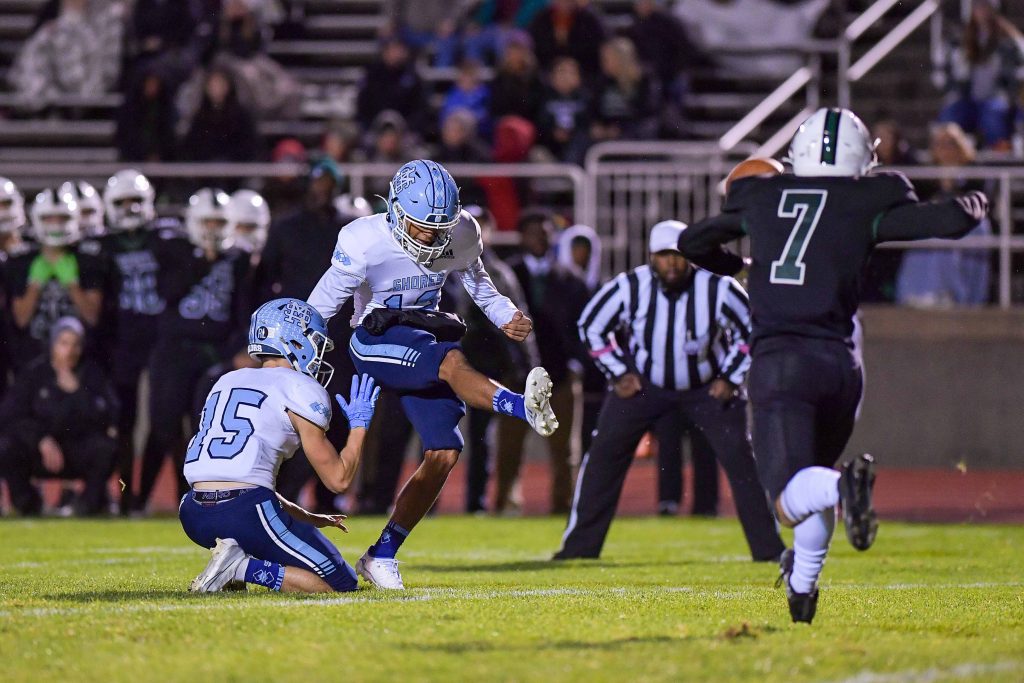 Kaden Pulaski puts the only first half points on the board with field goal at the end of the 2nd quarter. Photo/Eric Sturr 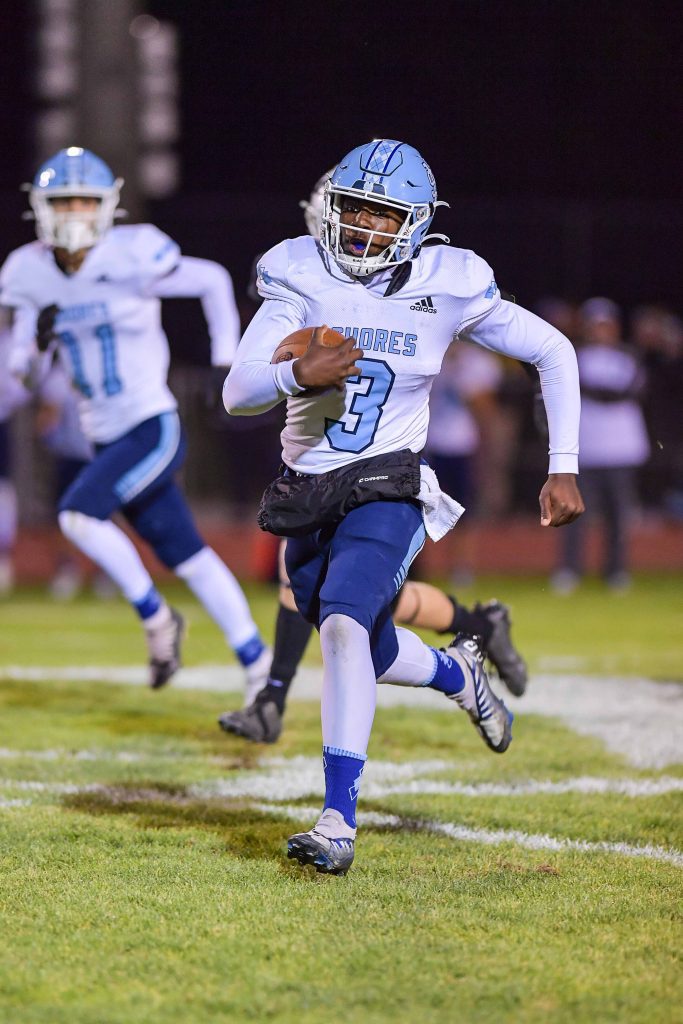 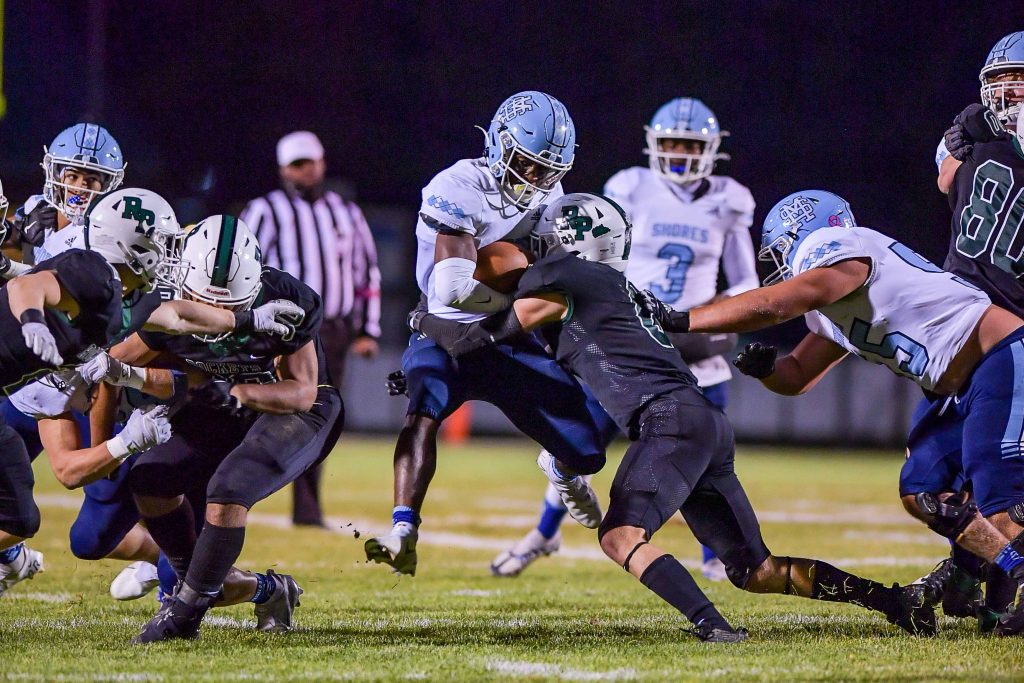 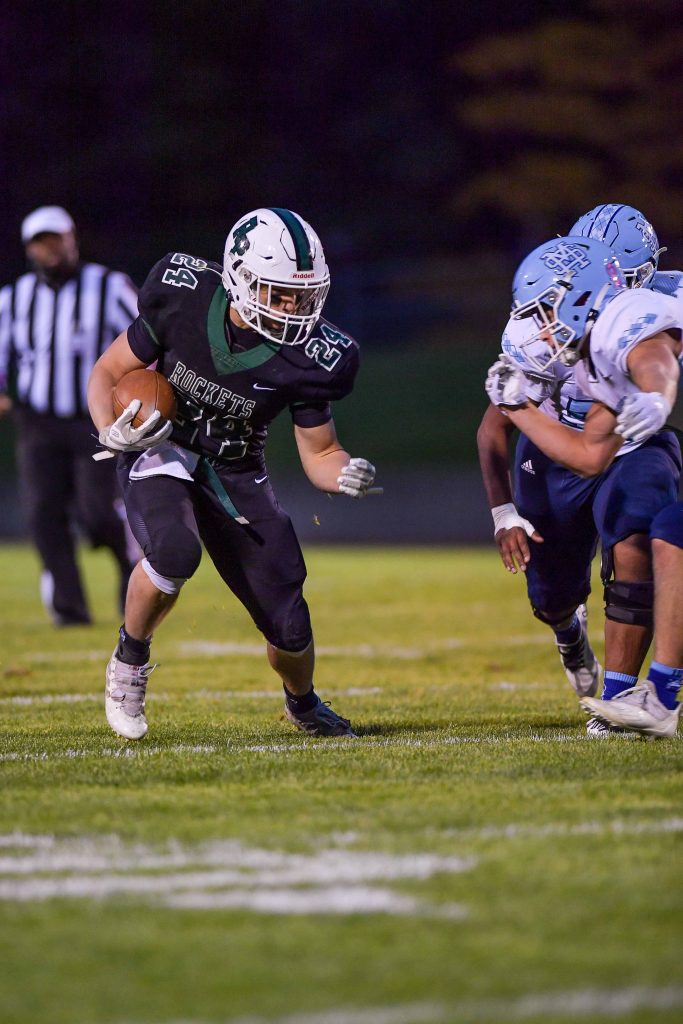