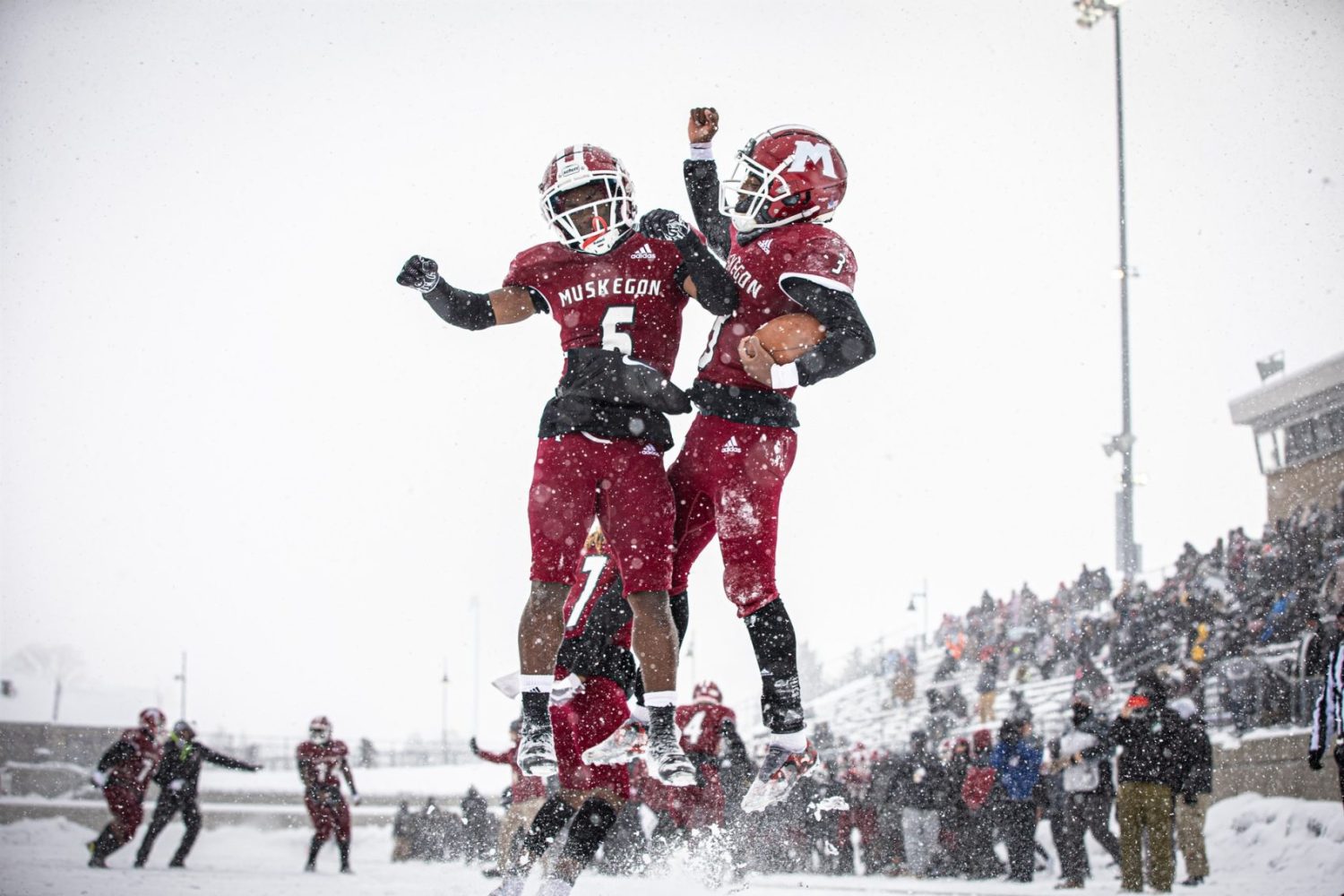 This little piggy had roast beef.

This little piggy had none.

And this little (Destin) Piggee is going to lead Muskegon to the Division 3 state championship on Saturday night at Ford Field in Detroit.

It will be the final high school football game played in Michigan in 2022, and it has the potential to be a doozy, with Muskegon (11-2) relying on the running of junior quarterback M’Khi Guy and Detroit Martin Luther King (9-3) on the passing of 5-star rated senior quarterback Dante Moore.

But don’t be surprised if those two are not the offensive stars of this game.

If Muskegon becomes obsessed with stopping Moore through the air, senior running back Sterling Anderson could kill the Big Reds with his legs.

If King does what River Rouge did to Muskegon in 2019 and jams the middle of the field with extra bodies and extra-big bodies to cut off running lanes between the tackles for Guy, watch for Piggee (5-7, 160) to take the ball on jet sweeps around the end from his slotback position and dazzle the crowd with his array of moves, stops and starts and, oh yes, blazing speed.

Piggee has been the quietest of Muskegon’s “big three” in recent weeks, partially because Zeeland West and DeWitt were keying on him in motion, making Guy’s read on the option a keeper run or a handoff to Jakob Price. But he also struggled with footing last week at Greenville on the snow and ice (2 carries for 5 yards), which obviously won’t be a concern in this game.

Piggee, in many ways, is the emotional leader of this Big Reds’ team – as his work ethic, focus and desire to win are off the charts.

His toughness also is inspiring. Don’t forget last year, when his father, former Big Red great Dereko Piggee, died of Covid on a Friday morning, then Destin went out after crying nonstop all day and played that evening. The next Friday, he attended his father’s funeral, then scored a touchdown and led the Big Reds to a come-from-behind victory at Zeeland West.

Muskegon will need to summon all of its collective toughness to overcome a Crusaders’ team that is packed with college recruits, both on the line and at the skill positions.

But the Big Reds seem to have more juice right now than in past years at Ford Field.

Fasten your seatbelts, this one could get wild.

Ottawa Lake Whiteford (13-0) vs. Ubly (13-0) – Remember the slow-speed chase with OJ Simpson in his buddy Al Cowlings’ White Ford Bronco? Seems like 100 years ago. Whiteford has a football team, just like Ubly, from 100 years ago – which eschews the forward pass. The Bearcats have trounced four perennial powers in the playoffs, while the Bobcats (Whiteford) have beaten four teams I’ve never heard of. Say it with me: “U-B-L-Y, you ain’t got no alibi, you Ubly, yeah, yeah, you Ubly.”

Grand Rapids Forest Hills Central (13-0) vs. Warren DeLaSalle (12-1) – Defense appears to be a lost art in football (check out some of the semifinal scores), but one team that is putting an emphasis on that side of the ball is FHC. Defense allowed the Rangers to beat Reeths-Puffer and Mona Shores in districts, but the reality is that DeLaSalle is on a whole different level. Pilots’ coach Dan Rohn will guide his team to its second-consecutive title, his sixth as a coach after winning four at Grand Rapids West Catholic and secure his place as a future member of the Muskegon Area Sports Hall of Fame.

Grand Rapids West Catholic (12-1) vs. Negaunee (13-0) – Negaunee actually felt it was a little warm on Saturday in Gaylord (25 degrees), where the Miners sweated out a 13-12 victory over Reed City to become the only “UP Power” at Ford Field. Unfortunately, Negaunee’s reward for making the finals is trying to tackle battering ram Timmy Kloska (6-0, 220) about 30 times. Kloska is a modern-day John Riggins, who has rushed for 2,182 yards and 35 TDs, taking turns running over people and around them.

Grand Rapids South Christian (13-0) vs. Goodrich (12-1) – It’s hard for me to even write about this game because I feel like it should be Whitehall. So, this pick is in honor of Nate Bolley, Jackson Cook, Graycen Shepherd, Winton Napier, Shane Cook and all of those other fabulous seniors on Whitehall’s fabulous teams that lost a heartbreaker to the Sailors in the regional finals. The SOM (Son of Mart) sees South Christian quarterback Jake DeHaan finding a way to break the hearts of the Martians, who deserve credit for finding a way to adjust to earth’s atmosphere and making it all the way to Ford Field.

Traverse City St. Francis (13-0) vs. Jackson Lumen Christi (10-3) – This is a matchup between two teams who need another state championship about as much as Jeff Bezos needs that mud-covered quarter he just stumbled upon in the parking lot. These two schools have combined for 186 football state titles (or something like that), and one of them will win another one on Saturday morning. Full disclosure: I was in the process of researching this game further, but I got distracted by the season finale of “Bachelor in Paradise.”

Belleville (13-0) vs. Caledonia (12-1) – The MHSAA wouldn’t have minded one bit if Detroit Cass Tech had pulled off the overtime win last Friday night, but instead Belleville quarterback Bryce Underwood scored on a 2-point conversion for a 29-28 win. So, the ongoing saga of Belleville playing without suspended head coach Jermain Crowell (illegal recruiting investigation) continues for another week. If this game had been played last week – outside in 20-degree temperatures and wind – I would have picked Caledonia. In the pristine conditions of Ford Field, the Tigers’ speed will be too much for the Scots to handle.

Frankenmuth (13-0) vs. Gladwin (13-0) – This is my favorite matchup of the weekend. Frankenmuth is very happy not to have to play Grand Rapids Catholic again, but after taking a few hits from the Flying G’s, they might think twice about that. Gladwin is this year’s Lawton, shocking one powerhouse after another (Kingsford, Oakridge and GR Catholic) en route to its first-ever berth in the state finals. Frankenmuth, summoning energy from a lifetime’s worth of broasted chicken dinners from Zehnder’s, held Detroit Country Day to no first downs and negative-2 yards of total offense last week. That made my day.

Montague loses big lead, but holds on for a 38-37 win over Hart in girls hoops

Orioles open the soccer season with wins over Fruitport and Gaylord

Ravenna wrestling team wins a district title by beating Hesperia, after three straight years of losing to the Panthers