BROOKLYN–The Mason County Eastern Cardinals boys’ cross country team finished their season with a seventh-place finish at the MHSAA Division 4 state finals on Saturday morning which was held at the Michigan International Speedway in Brooklyn.

Wyoming Potter’s House captured the boys championship with a score of 35 points. They were followed by Johannesburg-Lewiston with 100 points and Petoskey St. Michael came in third place with 152.

Mason County Eastern finished with 263 points while Pentwater had 405. 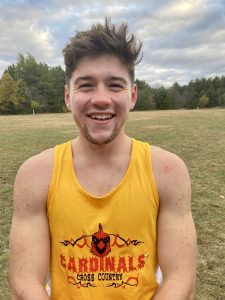 Mason County Eastern senior finished his Cardinal career with an 18th-place finish. He finished with a time of 17:03.02

In the girls’ division, Johannesburg-Lewiston took home the state title 118 points. They were followed by Hillsdale Academy with 151 points and Whitmore Lake with 192.