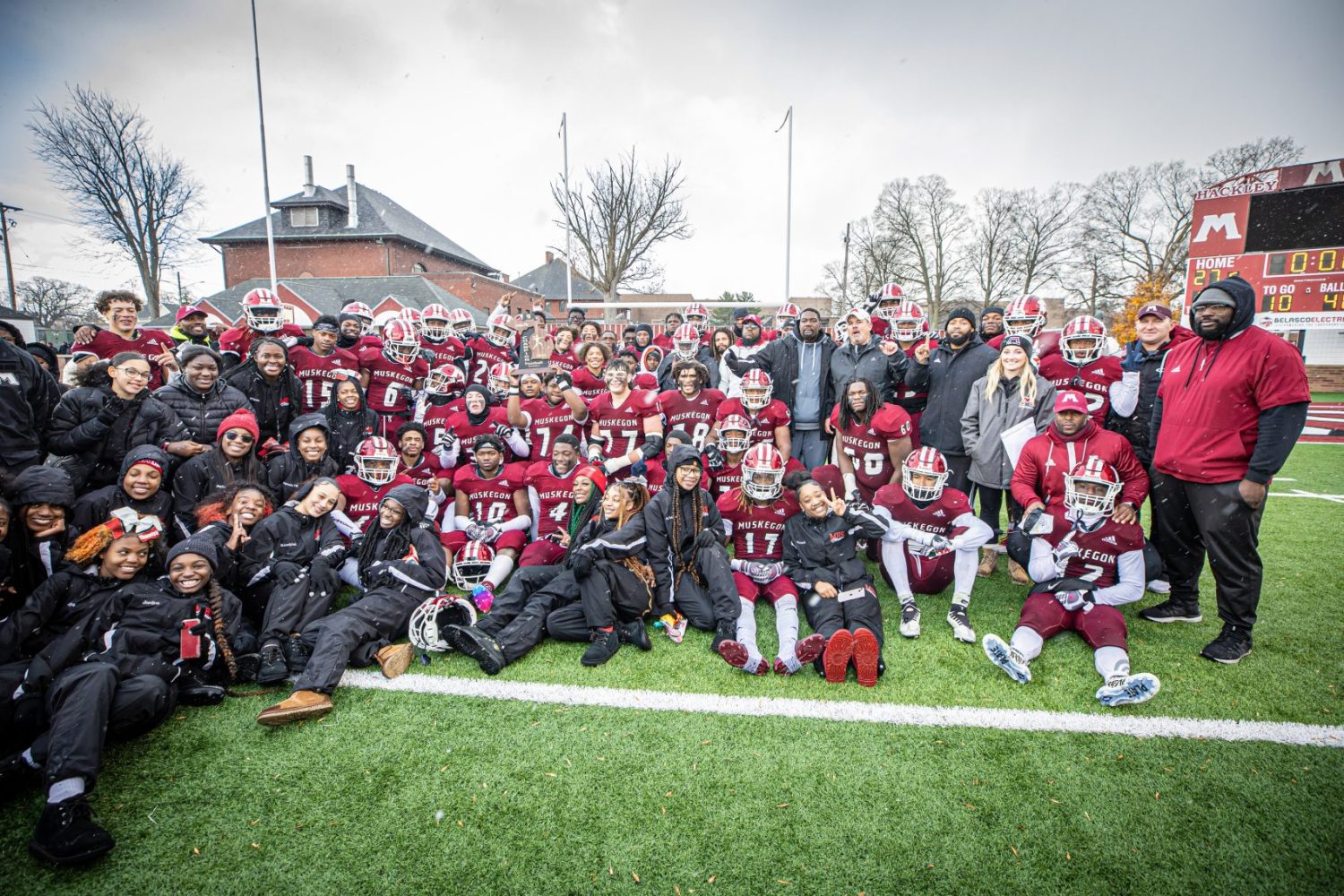 MUSKEGON–Revenge, they say, is a dish best served cold.

Cold was certainly the operative word on Saturday afternoon at Hackley Stadium (along with wind and off-and-on rain and snow), and revenge is what Muskegon delivered against Zeeland West, 27-20, in a Division 3 Regional championship game.

“It feels great,” said Muskegon junior quarterback M’Khi Guy about the payback victory. “I’m grateful for the team that we are becoming. We are getting better every week.”

A victory in that game will put Muskegon back in the state finals for the first time since 2019 and in position to win its first state championship since 2017.

Muskegon, the winningest high school football program in state history with 887 wins, took control of Saturday’s game from the beginning with a 13-0 lead after the first quarter, behind a 14-yard scoring run by Guy and a 5-yard TD run by Jakob Price. 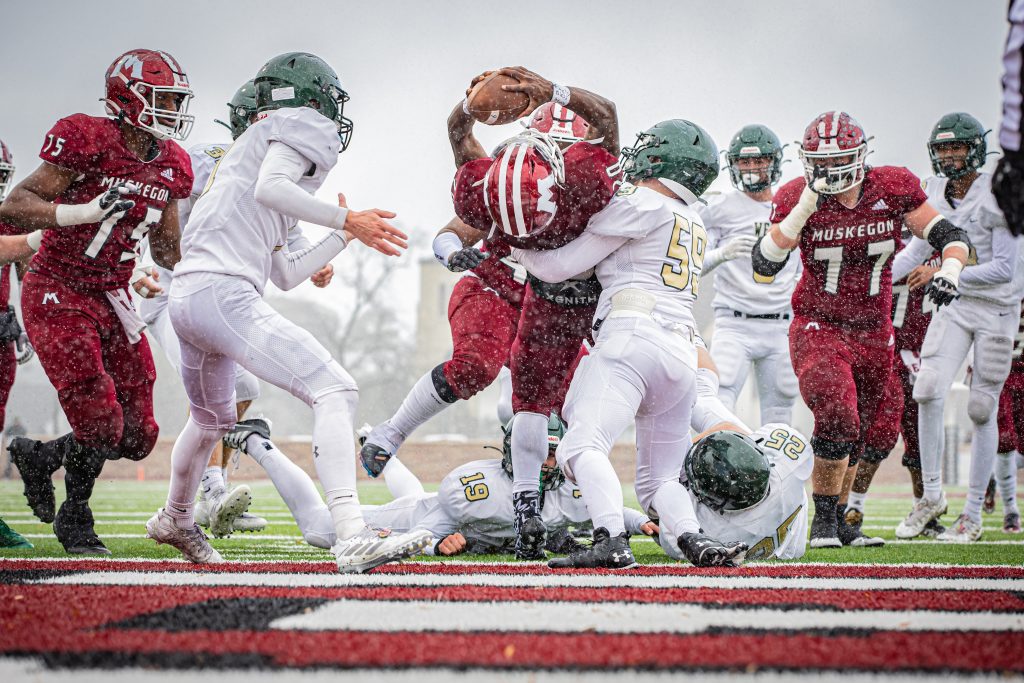 The start was a sharp contrast to the first meeting, when the Dux roared out to a 20-0 lead after the first quarter before the Big Reds rallied.

The Dux scored their only touchdown of the first three quarters with 7:05 remaining in the first half, on a 10-yard run by senior Parker Lovell.

Muskegon led 13-8 at halftime and that’s how the score remained until the final play of the third quarter, when Guy looked to be tackled in the middle of the field, but somehow got away and completed a 32-yard scoring run, making it 20-8 heading into the final quarter.

The leader of the defensive effort was senior cornerback Kingston Blackmon (5-7, 160 pounds), who, like many of the Big Reds, is undersized, but makes up for it with speed, strength and effort. 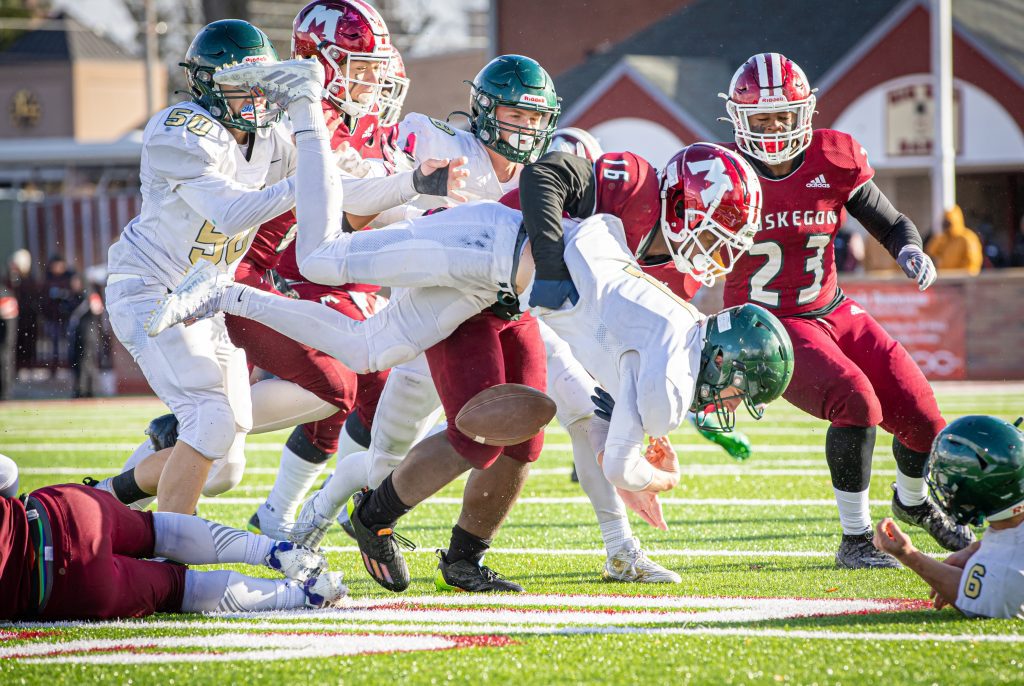 “We have a lot of small guys, but we have heart and determination and don’t let up,” said Blackmon, who is joined as a starter on defense by his fraternal twin brother, Princeton. “My job on every play was to set the edge. Playing against them is a challenge, and we all had to do our job on defense to get the win.”

The sophomore linebacker duo of Adrian Rankin and Darekeo Speech led Muskegon’s defense with 12 and 11 tackles, respectively. Kingston Blackmon and Mason Hunter each made 10 tackles and Princeton Blackmon and Julian Neely each had seven stops.

Zeeland West finally got its offense going in the fourth quarter, rallying for two touchdowns (failing to convert the ensuing 2-point conversion both times), to tie the score, 20-20. 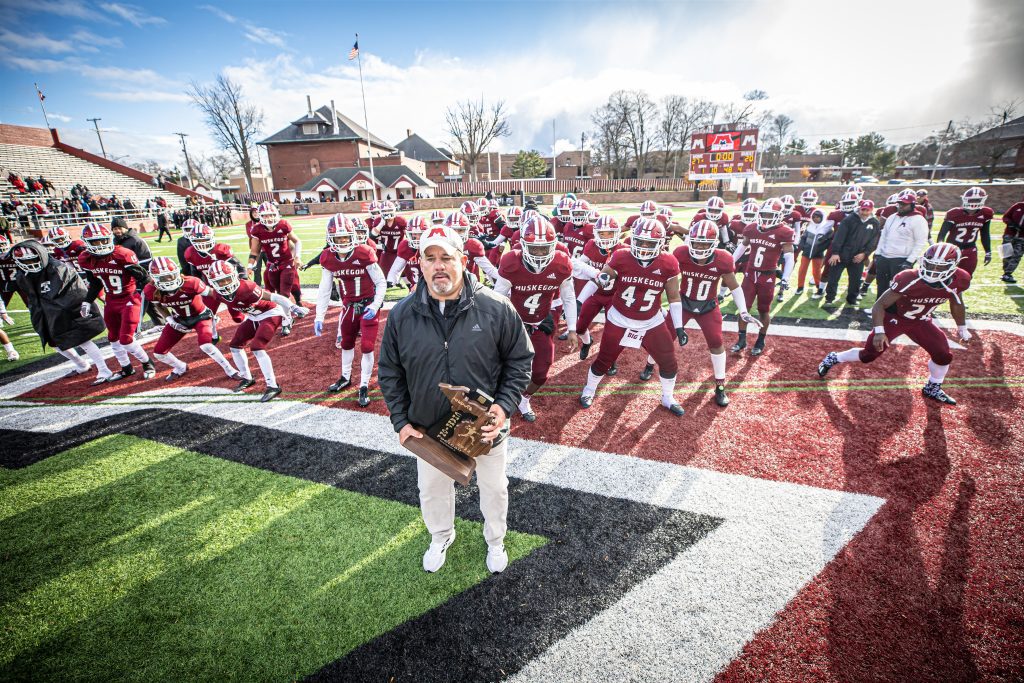 The Dux first score in the fourth quarter came through the air, as senior quarterback Trevor Wallar hit wide open Skylar Geurink out of the backfield on a 26-yard scoring pass.

The game-tying touchdown was set up when Muskegon fumbled on the next play from scrimmage (the Big Reds’ only turnover of the game), giving the visitors the ball on the Muskegon 47-yard line. Junior fullback Parker Holman broke loose on a 39-yard run on a 4th-and-2 play as the Dux tied the game with 6:22 remaining.

At that moment, it didn’t look good for the Big Reds – with all of the momentum belonging to Zeeland West and 18th-year coach John Shillito, who led Orchard View to the state championship game in 1995 and 1999.

It was also eerily reminiscent of the last time Muskegon played a Saturday afternoon game at Hackley Stadium – which was a 21-14 loss to Cedar Springs in last year’s Division 3 District championship game. 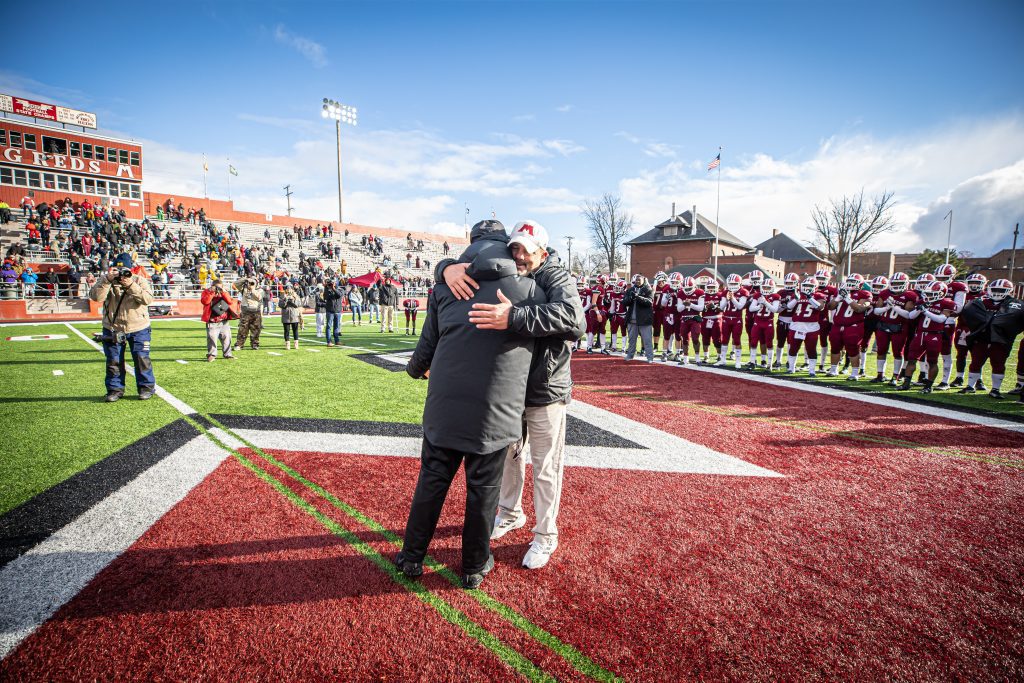 But that was when Guy, even though he is still just a junior, stepped up for his team.

Guy certainly delivered. The Dux had to respect the motion of Piggee from his slotback position and the power inside running of Price, which created running room and opportunities for Guy, including on his game-winning 15-yard scoring run with 2:51 remaining.

It was a nervous margin because the Dux always go for the 2-point conversion after scoring a touchdown. That meant that a score and conversion could give the visitors the comeback win.

But Kingston Blackmon led the defensive effort on the ensuing drive, making several big stops on the edge, forcing a 4th-and-long with 52 seconds remaining. Tight end Carter Hughes couldn’t hold on to Wallar’s fourth-down pass and Muskegon was able to run out the clock. 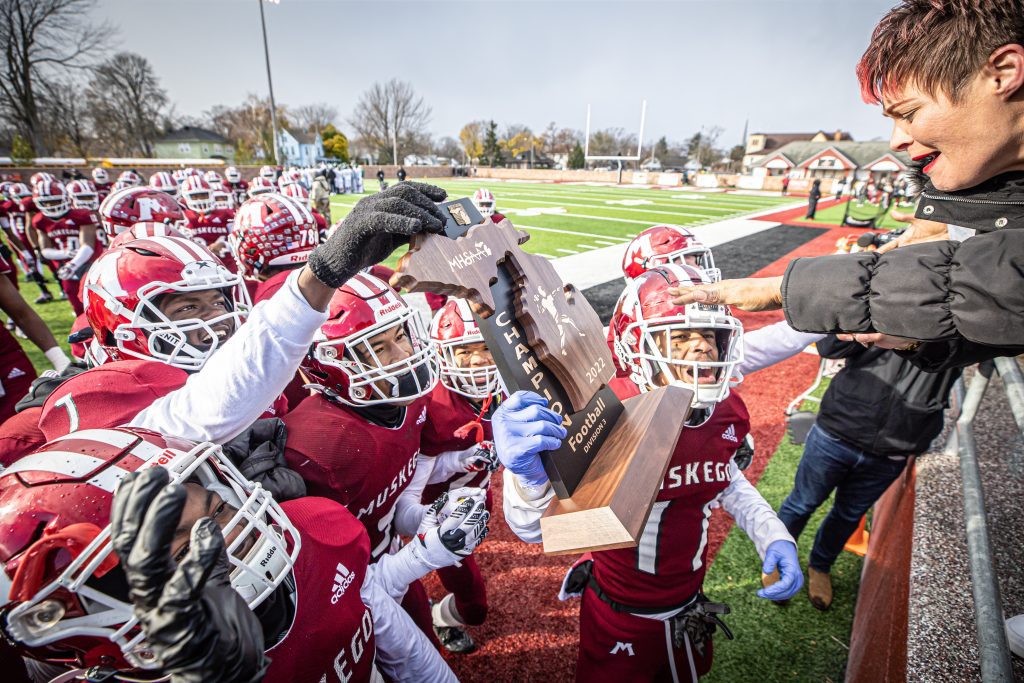 “The defense showed up today,” said Guy of the effort against the Dux, who average more than 40 points per game. “They got multiple stops to get us the ball back and they got that final stop to seal the win.”

Holman led the Dux with 17 carries for 121 yards. Geurink carried 20 times for 60 yards and added two catches for 47 yards.

Muskegon moves on to face a familiar opponent in DeWitt, for the fourth time in the last five years. 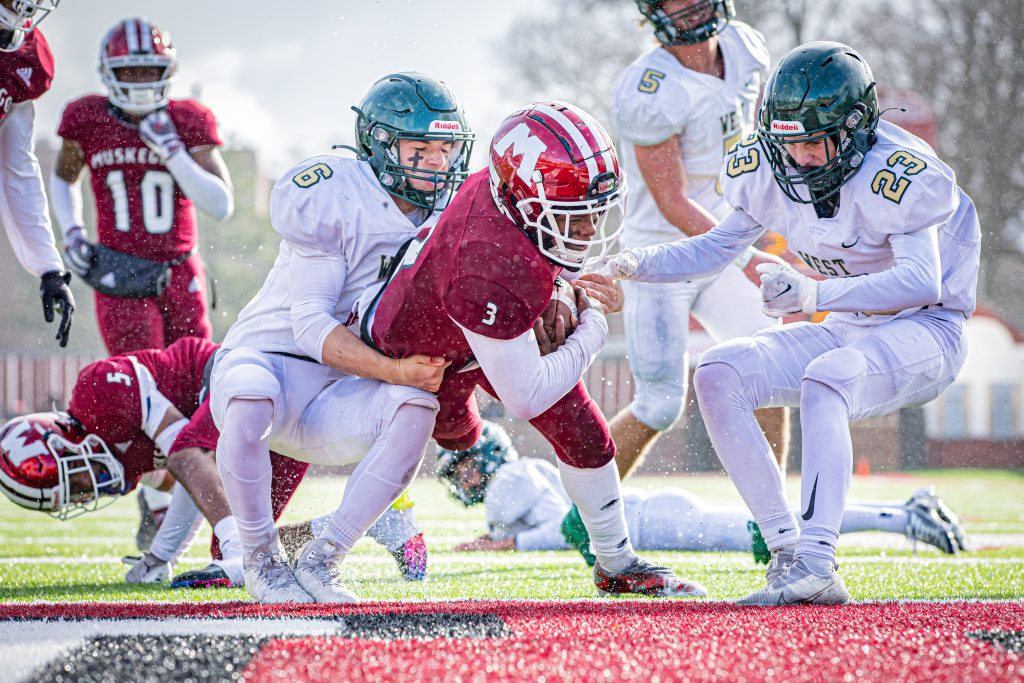 Grand Haven finally gets the best of the Big Reds in districts, beating Muskegon 66-51 in the Division 1 boys title game